On Friday, the 227-room, 14-story Drury Plaza Hotel Downtown Milwaukee opened its doors inside a completely renovated 1929 tower designed by Eschweiler and Eschweiler.

Milwaukee has been undergoing a hotel boom lately as the city attempts to ramp up rooms to boost convention business. The announcement earlier this year that the Democratic National Convention will be held here next summer has further accelerated the growth, with a number of projects just open, about to open or under construction.

One of those that’s just swinging open its doors is the Drury Plaza Hotel Milwaukee Downtown, 700 N. Water St., on the corner of Water and Wisconsin. 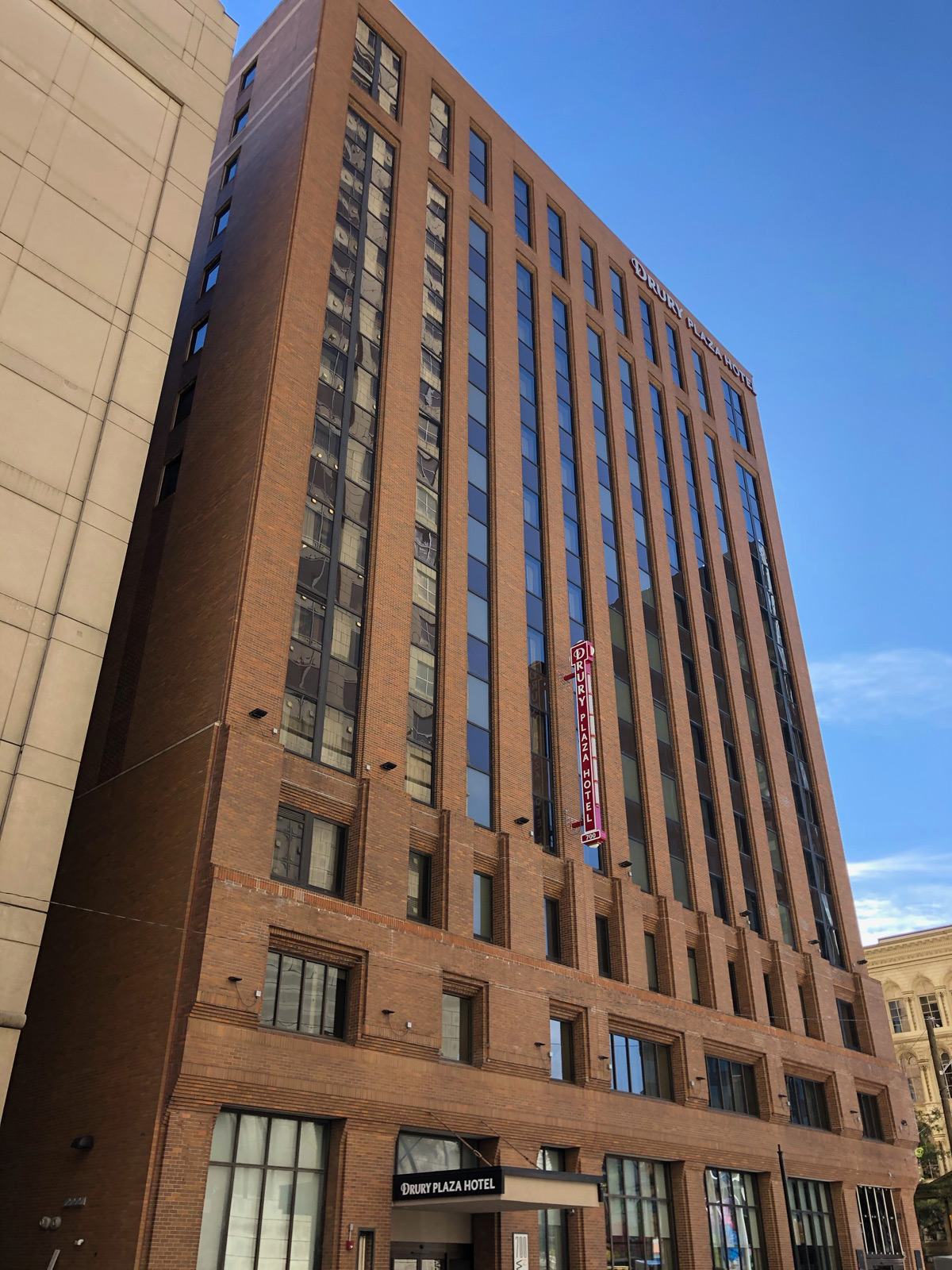 The 227-room, 14-story hotel also boasts nearly 5,000 square feet of meeting space across eight rooms and a 693-square foot ballroom. One of the meeting rooms is nearly as large at 686 square feet.

There’s also an indoor pool, which remains something of a rarity in Downtown hotels – though the new Cambria on Clybourn Avenue also has one – a hot tub, free wifi, a 25-hour business center, self parking in an adjacent garage, free breakfast, free soda and popcorn in the afternoon, a 24-hour fitness center, a guest laundry and pets are allowed. 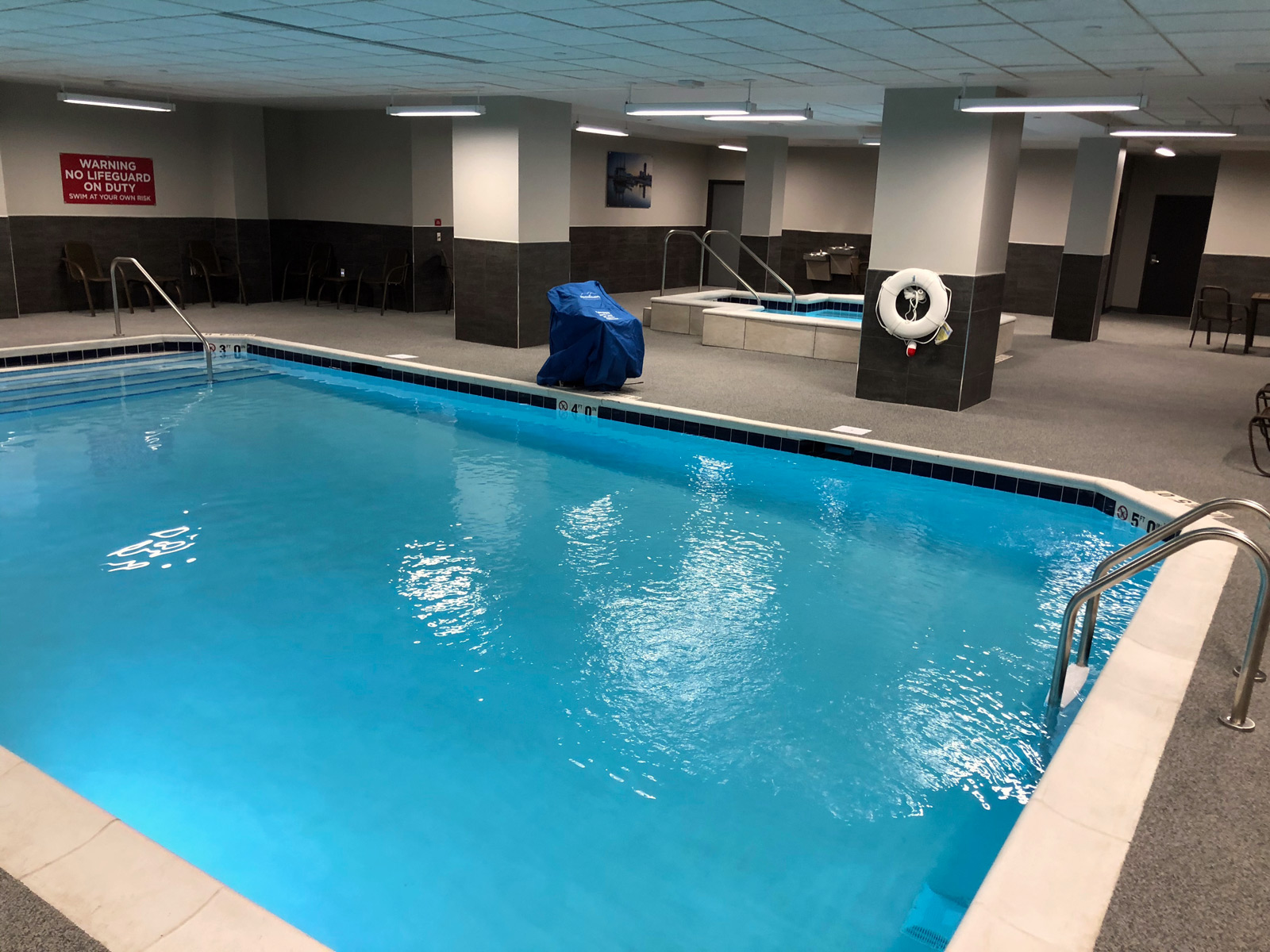 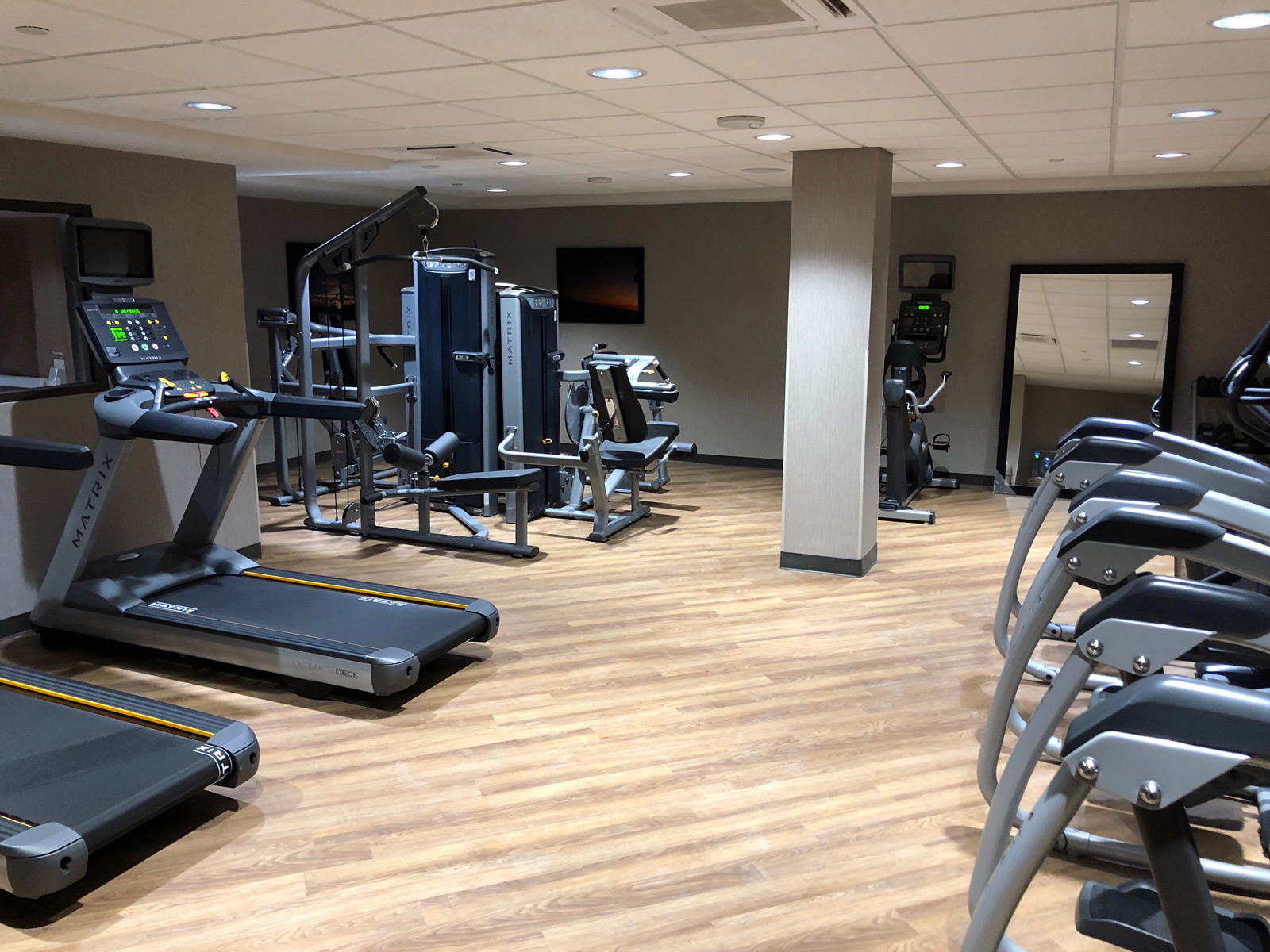 From 5:30 until 7 p.m. daily the hotel hosts what it calls the 5:30 Kickback, which offers an impressive buffet and, for adult guests, three free drinks.

The Drury Plaza Milwaukee Downtown is the first property in Wisconsin for the St. Louis-based Drury, which operates about 150 hotels in 25 states.

"We are a plaza," says General Manager Chris Palid. "So, the plaza's the cream of the crop for Drury Hotels. This particular building (and) the location is great:  Downtown on Wisconsin and Water. And we have a full pool, fitness center, hot tub ... all in the basement.

"We try to cater to both families and business clientele. So having that opportunity for a family from the suburbs or from northern Wisconsin to come down and swim in the pool, eat our complimentary breakfast, enjoy our fire where you can kick back. And then business travelers have accessibility to all the major business, etc."

The 153,200-square foot Drury Plaza Hotel is new, but the building is anything but. 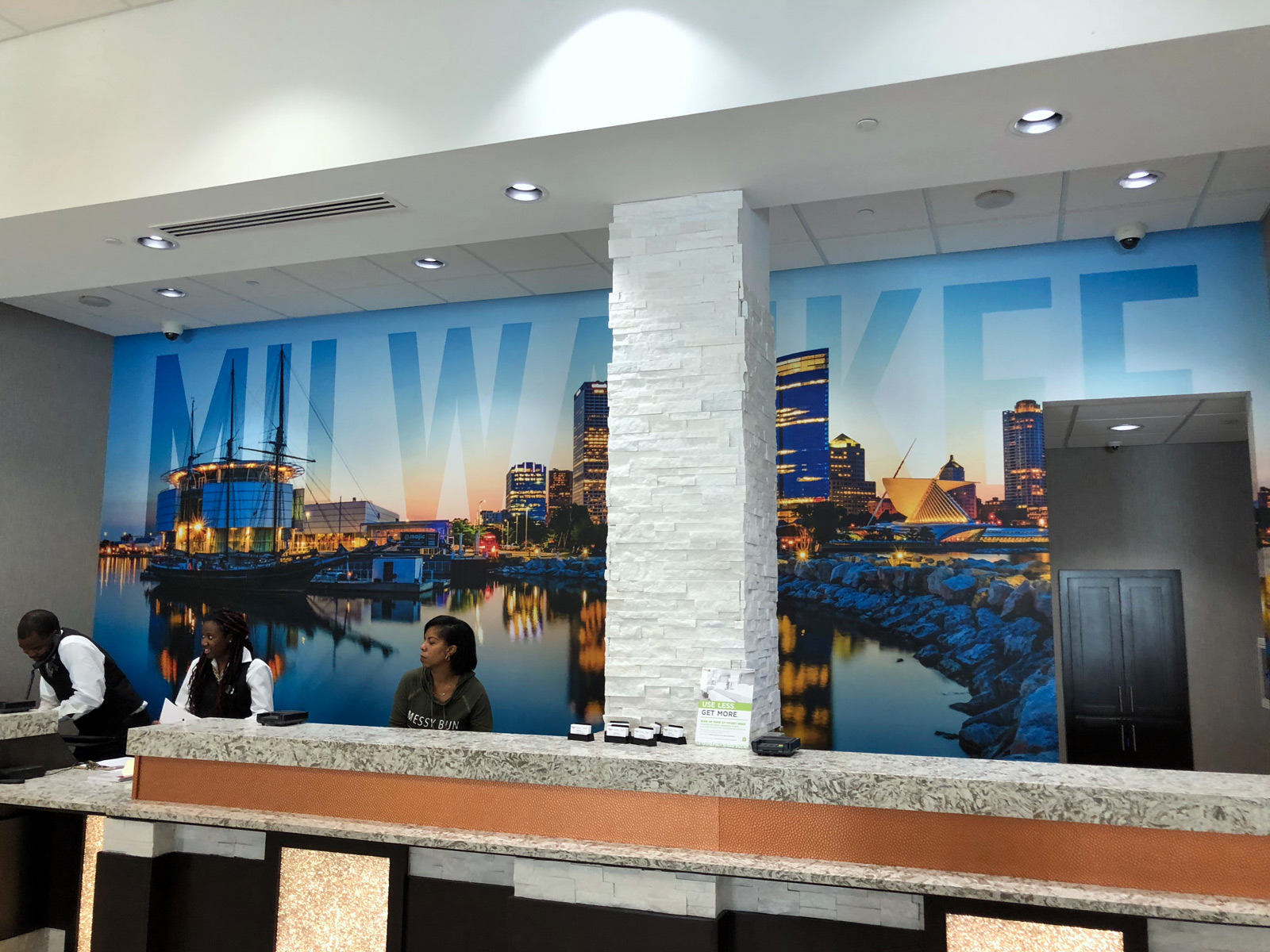 Erected in 1928-29, the tower was designed by Milwaukee’s Eschweiler and Eschweiler at the same time the firm’s designs were changing the Milwaukee landscape, including its Wisconsin Gas building a few blocks east.

Though it was drawn as a tower with Art Deco styling, by 1983, all of the building’s exterior decoration had been removed and its windows replaced, leaving a more streamlined facade that looked newer than it actually was. 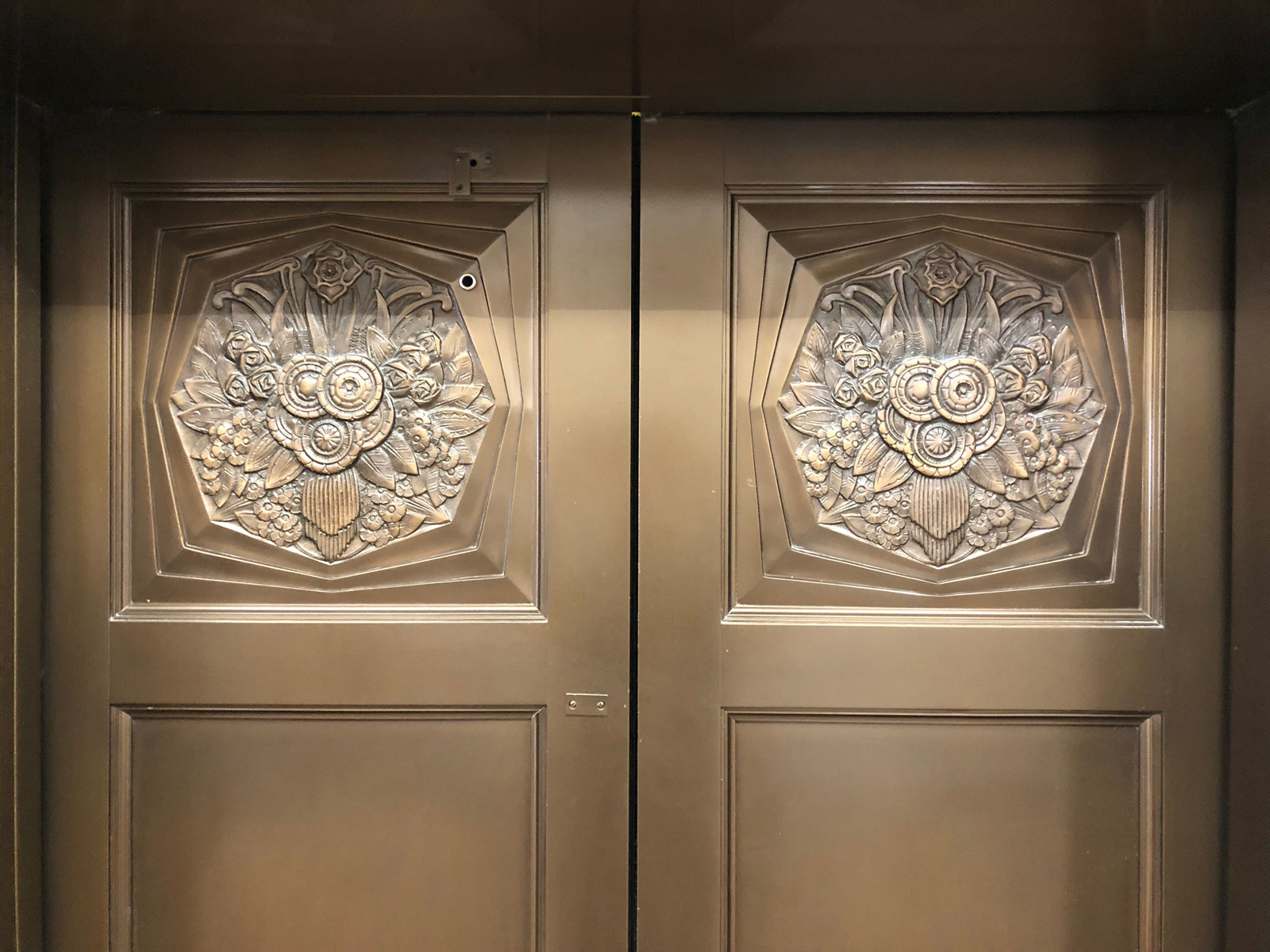 When the $1.3 million Bankers Building was announced in July 1928, the "skyscraper" was only half the news. In fact, the headline on one Milwaukee Sentinel article read, "City landmark will give way to skyscraper." 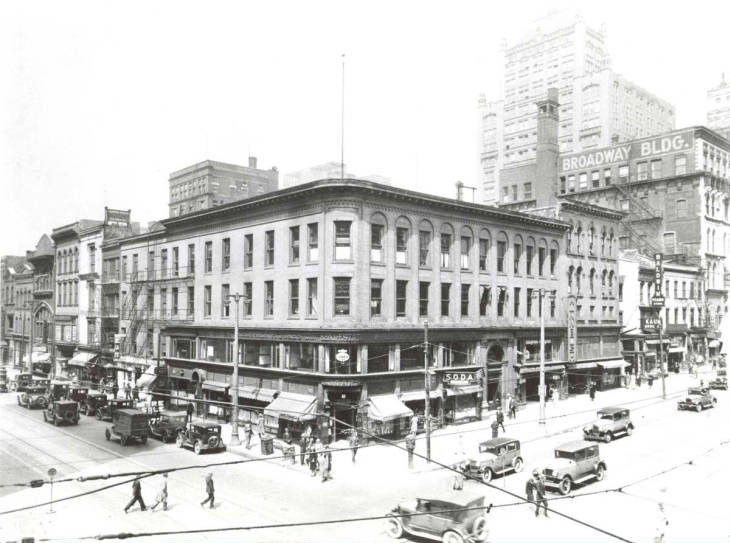 Before the Bankers Building could rise, the 1845 Camp Building, which had been built by Milwaukee pioneer Abner Kirby, who ran a jewelry store on the first floor for a decade, had to be razed. 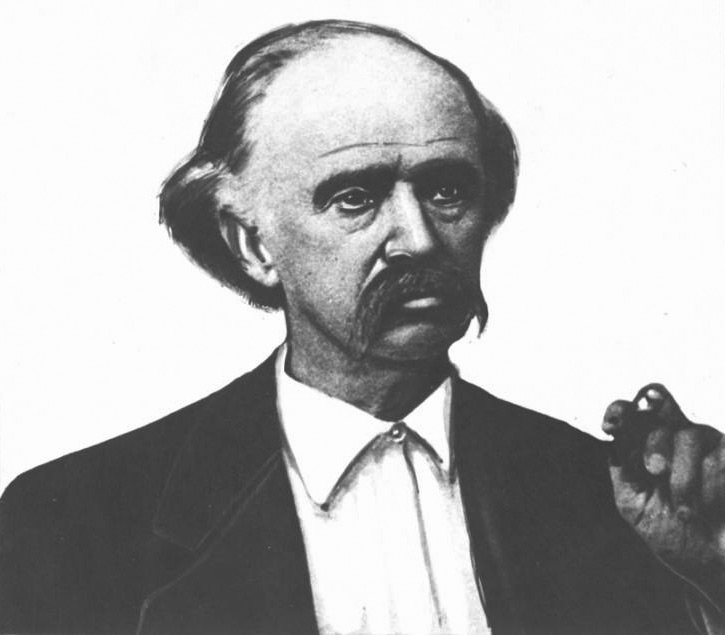 Kirby (pictured above in an image from the Milwaukee Public Library) – who was elected mayor in 1864 – also operated his well-known Kirby House hotel on the the next corner north. Earlier in its life the Camp Building had been called the Abner Kirby Building. 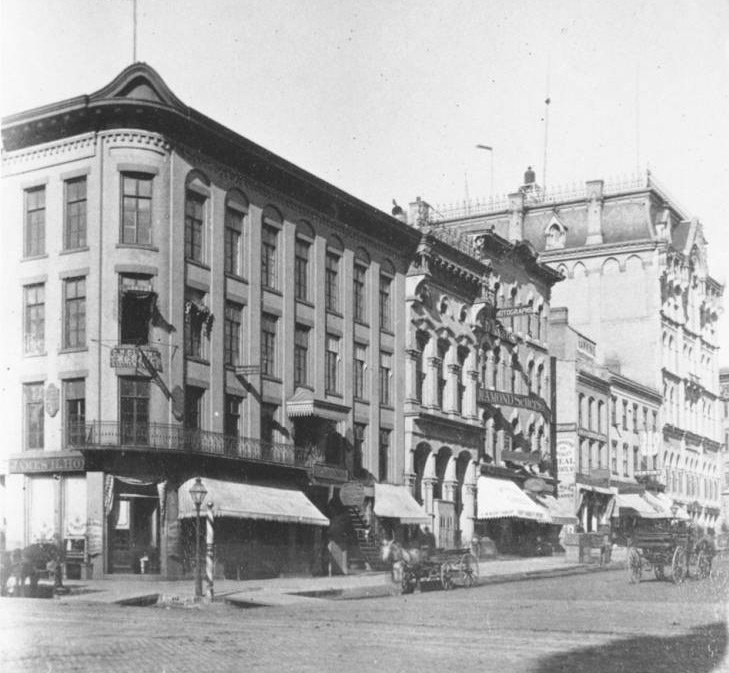 The Abner Kirby Building in the 1870s. (PHOTO: Courtesy of Milwaukee Public Library)

In fact, the Sentinel boasted of its charms:

"The new building will be a modern office and store building of steel frame and reinforced fireproof construction. The exterior will be of face brick and terra cotta with granite base. The building will be finished with cabinet walnut trim and will have a 5 foot marble wainscoting in the corridors. The corridor floors will be terrazzo marble of attractive contrasting colors.

"The first floor, with the exception of space devoted to entrance and lobby, will be occupied entirely by stores and shops, while the space above the ground floor will be devoted to office space. A number of upper floors will be especially equipped with gas, air and other facilities to meet the needs of physicians and dentists. The plumbing, ventilating and heating equipment will be of modern design.

"The location of this property ... is regarded as one of the finest in Milwaukee. Wisconsin Avenue is the principal business street and traffic artery of the city and the location of this building at East Water Street directly across the street from the Trust Company building, Marshall & Illsley Bank and less than a block from the First National Bank makes it in the heart of the financial district of the city."

The paper noted that the building was to occupy two plots of land held under separate leases, one along the south part of the site, along Wisconsin Avenue, that ran 99 years, and another, facing Water Street, that had 78 years remaining.

The leases, worth about $4.5 million, according to the Sentinel, were negotiated by Frederick P. Jones, who had kept offices in the Camp Building. 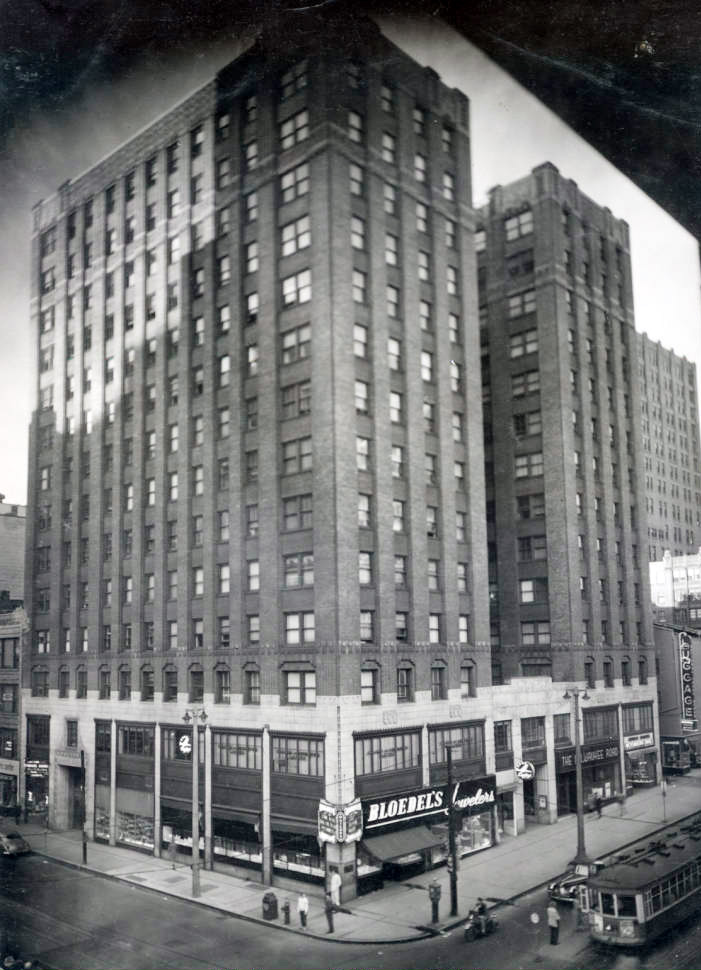 The building in the 1950s. (PHOTO: Courtesy of Milwaukee Public Library)

By the following February, the Journal reported that the owners, "Report rapid progress in erection of new structure" and that the Bankers Building would be ready by April 15, with an opening slated for May 1.

"That the building is a notably quick job, Mr. (Thomas E.) Allen (of the Water Wisconsin Co., builder) said, is exemplified by the steel bars that have virtually flung themselves into the sky on the spot where last October still stood the solid rock pile of the generation old Camp building. He said that modern building causes extraordinarily little interruption of traffic on the streets even though construction consumes a prodigiously large number of cubic yards of incompressible material.

"When completed, the Bankers Building will be 14 stories of reinforced concrete. Each of the floors from the third to the 14th is typical, there being 8,500 square feet on each of those floors, making a total of 110,000 square feet of rentable area. Of the seven ground floor stores four are already under lease and negotiations are under way for the remaining stores. Sunlight will pour through 800 windows, the ratio being one square foot of glass to every six square feet of floor space. Thousands of brick and hollow tile for fire resisting inside walls are being used. From street leve to the top of the flagstaff the building measures 155 feet."

When May 1 arrived, the building opened and one of its first retail tenants was Milwaukee’s Nunn-Bush shoe company, which had a shop on the ground floor.

Over the years, the building was home to countless businesses and was most recently known as the First Financial Center. By the time it was purchased in 2016 by Milwaukee Exchange/Drury Southwest for $4.6 million, much of the building was sitting empty. 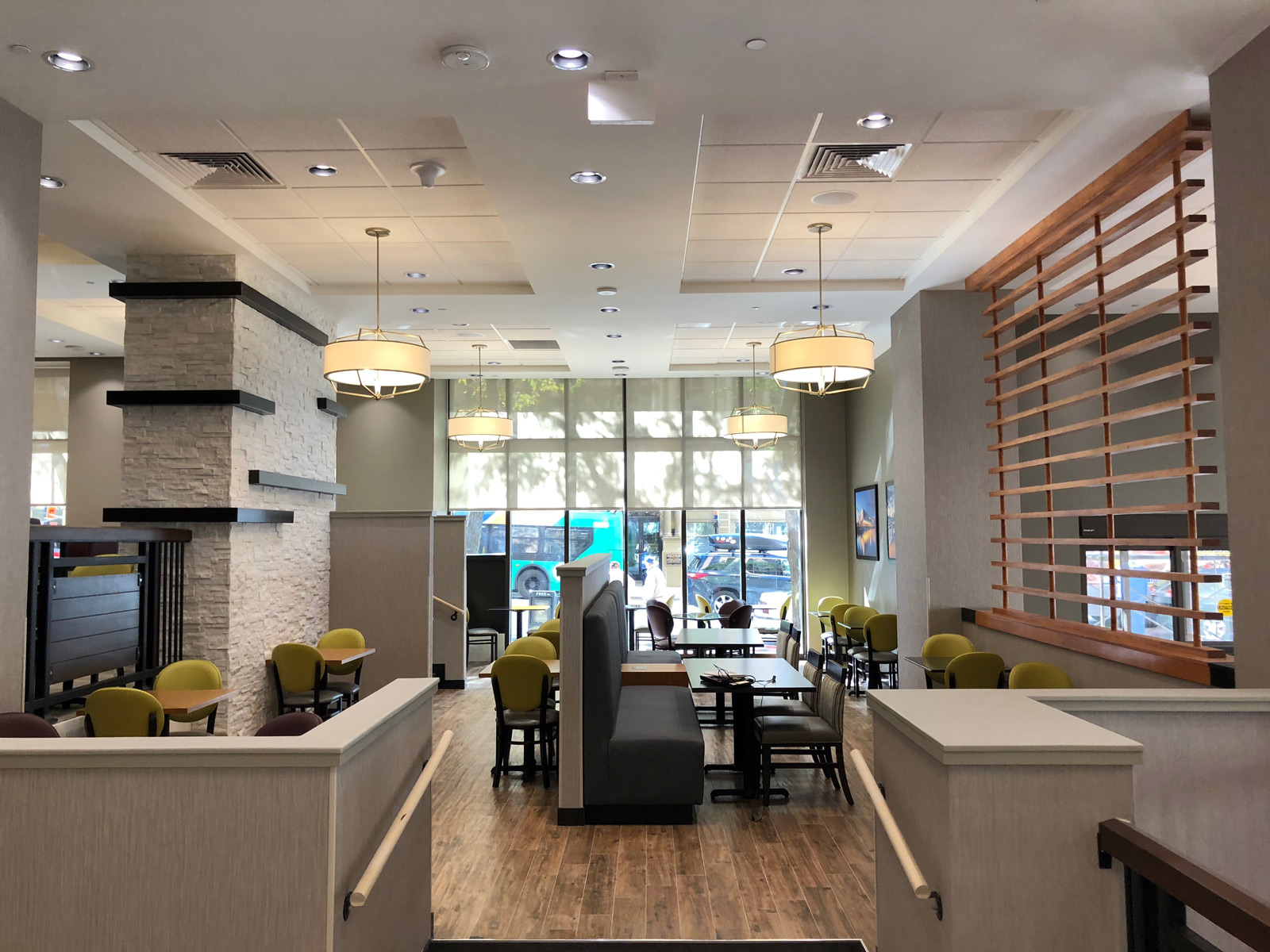 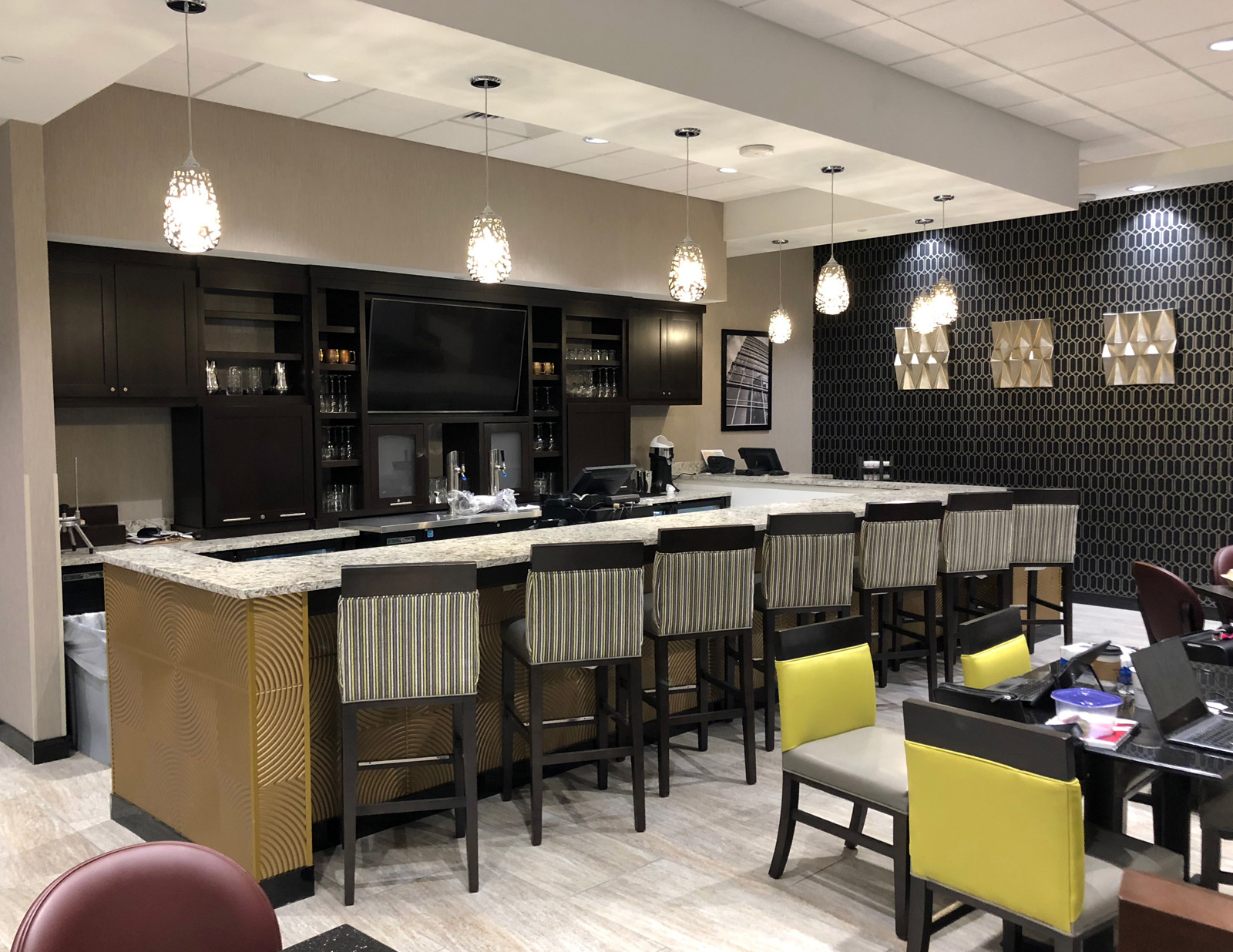 The hotel was slated to open on Friday afternoon and about half its rooms were booked for the first night. It was already sold out for its second night.

When I visited a few hours before opening, workers were putting the finishing touches on the building, staffers were getting the front desk and lobby bar ready and city inspectors were making sure everything was hunky dory. 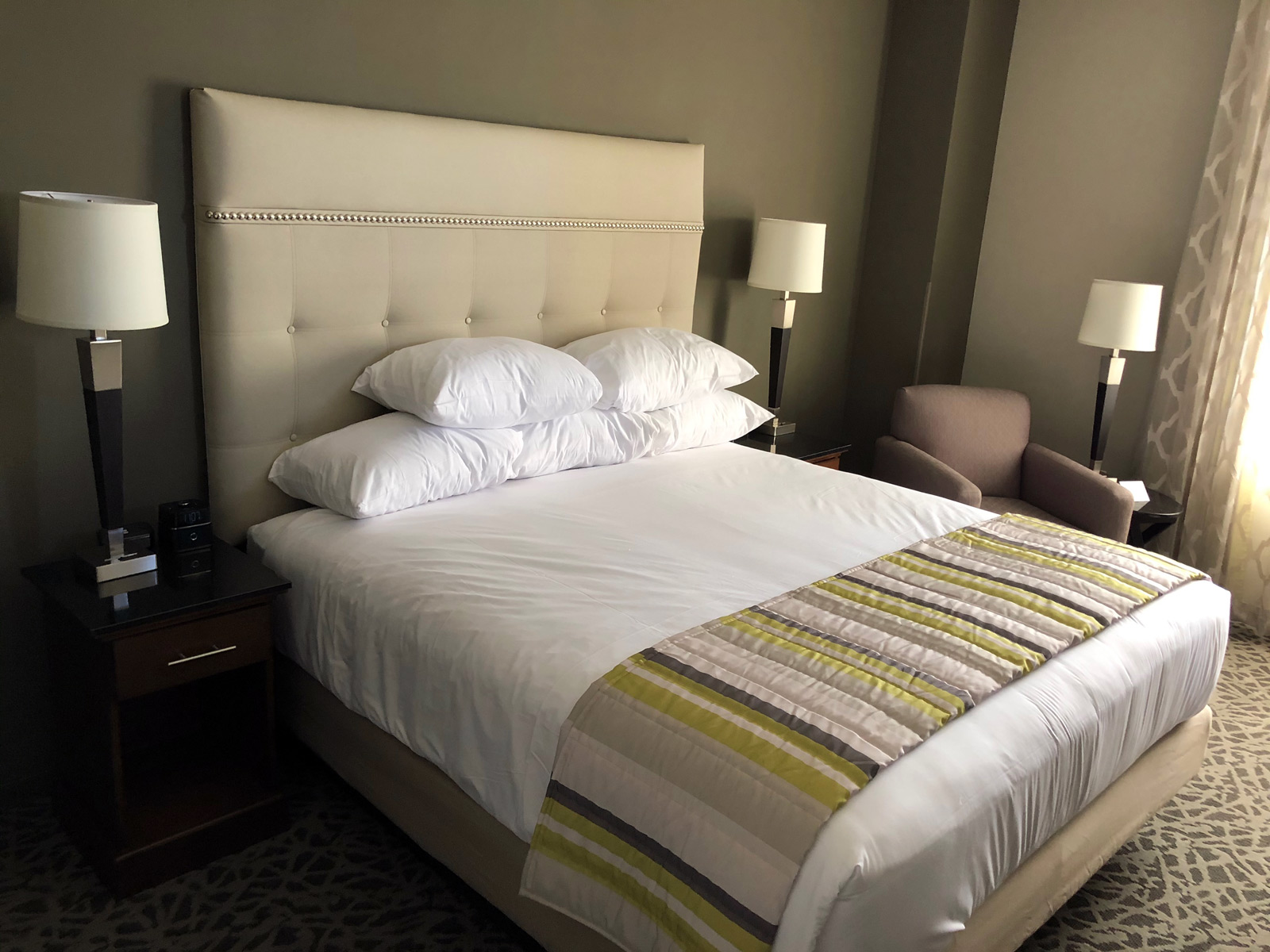 "We’ve flown in housekeeping from other cities, we have a team here from our main office," says Palid, a Milwaukee native who has returned home to work at the Drury. "We will have everything ready for guests." 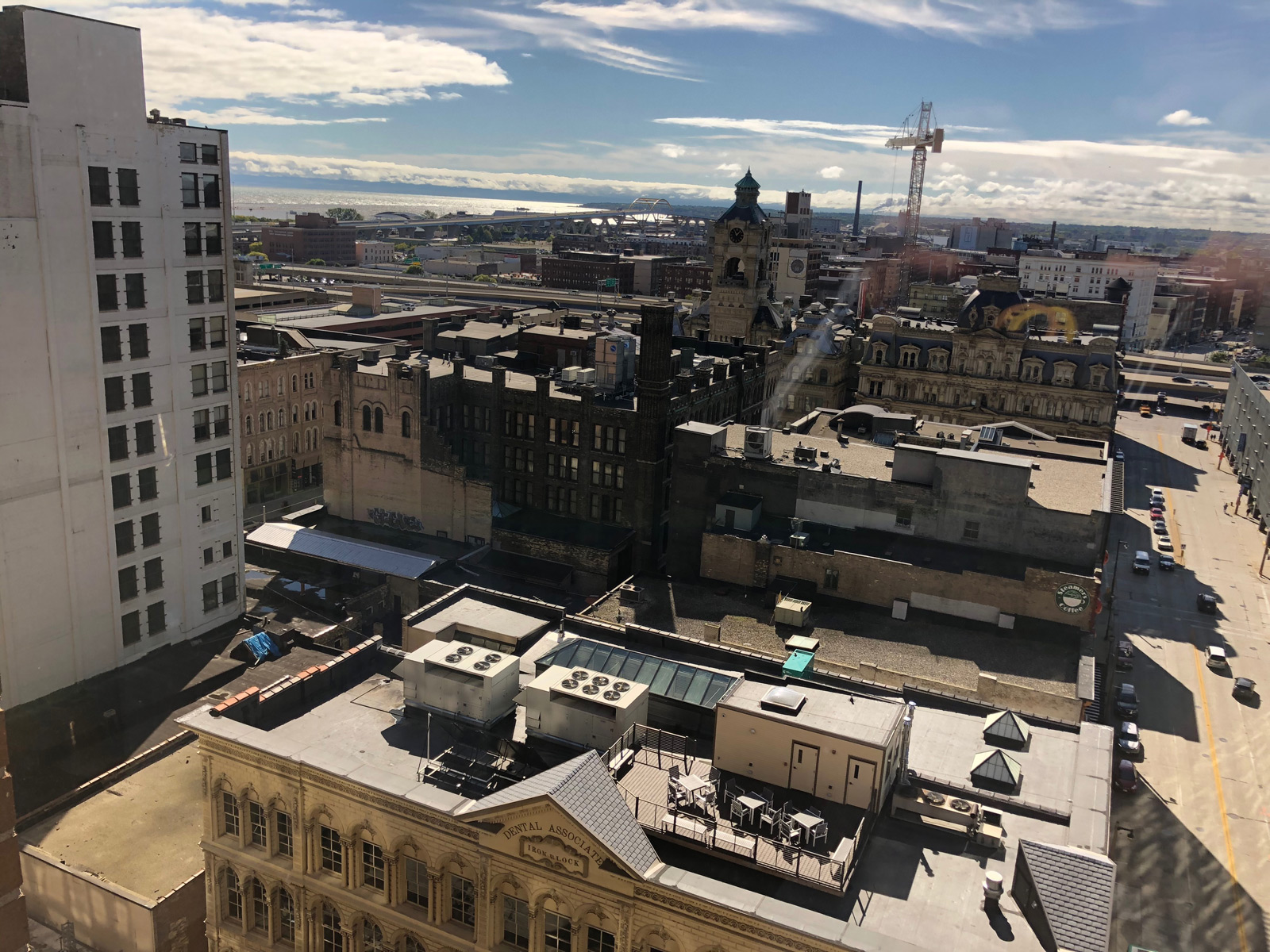 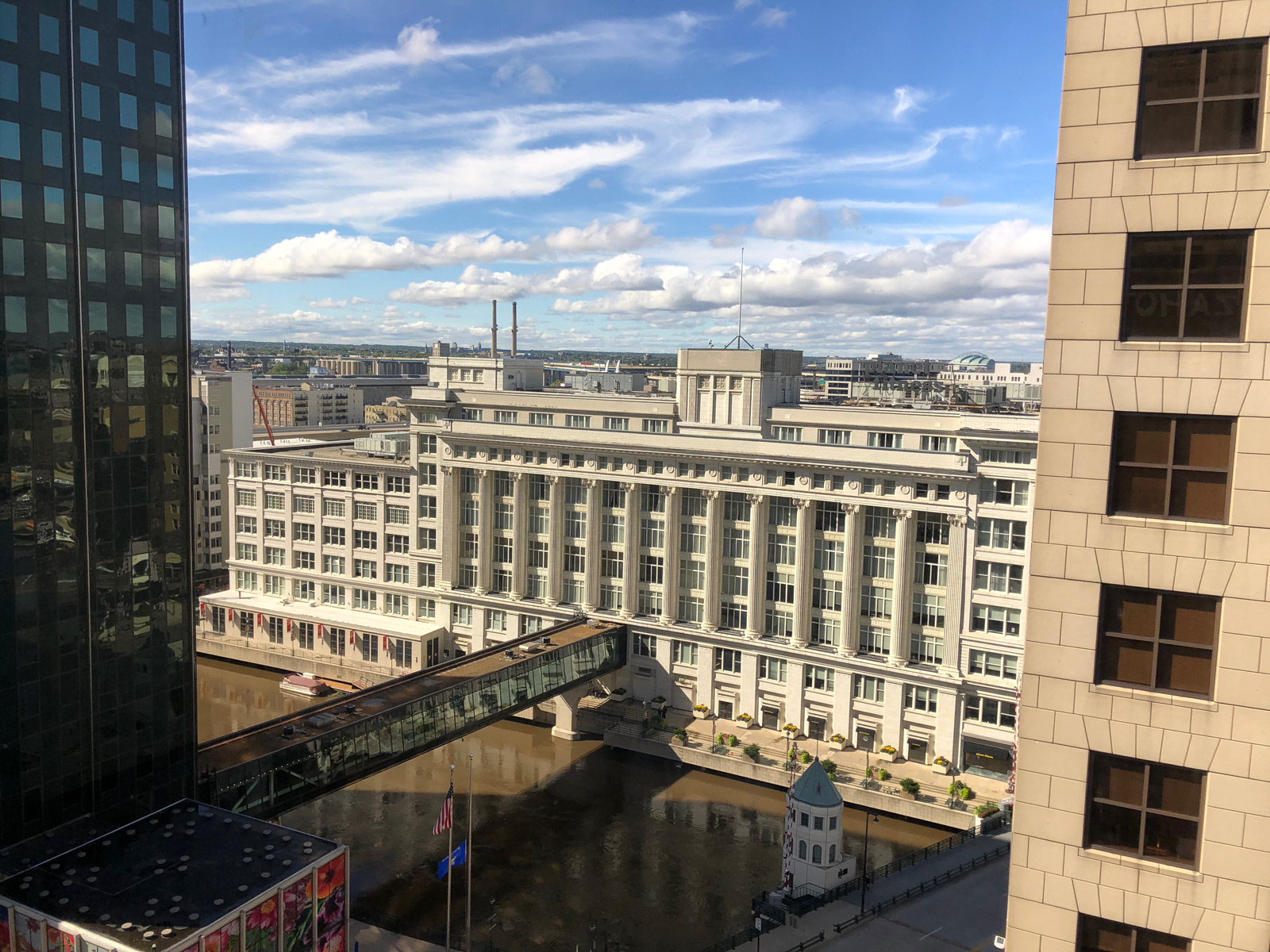 The design is clean, but comfortable and modern, and all guest rooms have microwaves and refigerators. There are suites with double king beds and attached living rooms, and many of the rooms have great views of Downtown and even out over the lake.

"The rooms have been finished already for a while," says Palid. "We've been in this building for over two years working on it, putting it together, turning it from a bank and office space into what it is now."