Eagle Park - founded in 2015 - is about to release the first bourbon from its new spirits division, and already it's finding that its beer-focused customers are eagerly hopping aboard for the ride.

Eagle Park – founded in 2015 – is about to release the first bourbon from its new spirits division, and already it’s finding that its beer-focused customers are eagerly hopping aboard for the ride.

It’s been less than two months since Eagle Park, which built a big new brewery, taproom and distillery in Muskego in spring, launched its first vodka. (Eagle Park also has a brewery and tap room on Hamilton Street, near Brady, on the East Side.)

With that taproom now open for about a month, interest in the spirits has been soaring.

"Regulars who are big beer drinkers have been asking, ‘when is the bourbon coming," says co-owner Jake Schinker. 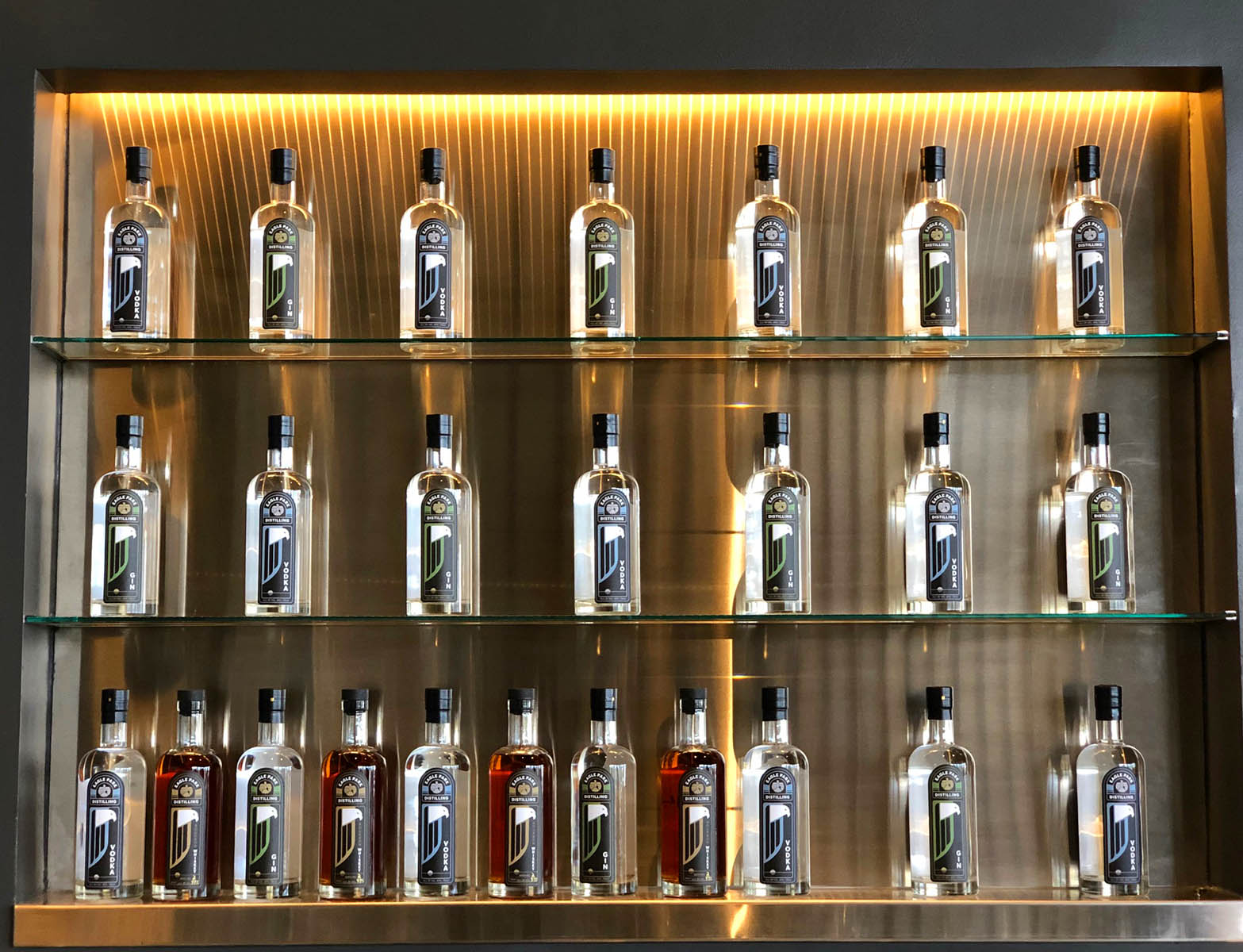 "Our cocktail sales have quadrupled in that month," adds co-owner Jackson Borgardt. "People are now having a cocktail and then a beer, or maybe a beer and then finishing with a cocktail."

That interest has mirrored the popularity of Eagle Park’s beer during the pandemic. Beer demand has been through the roof.

"We’re at capacity," says Schinker. "In next few weeks we're getting another brite tank to help add capacity, especially packaging, and we’ll get four more fermenters by the end of the year. When we planned this (new brewery), we thought they’d be good for at least a year and a half.

"Now as soon as we empty a tank we’ve got something else ready to go in it."

Meanwhile, on the distillery side, distiller Jordan Stielow – who came here from Colorado's Breckenridge Distillery – is working to bring spirits out while he’s also distilling home-grown products for the future.

When I visited on Tuesday to talk about the bourbon that’s releasing to Eagle Park members on Friday and to the general public on Saturday, and tasting all the currently available spirits, there’s a batch of rum splashing around in the still next to us.

One of a number of anticipated rum products, this one is fermented from unbleached white cane sugar and is expected to spend two years aging in a barrel.

Currently on the shelves in the tasting room are the first Eagle Park vodka and gin.

The vodka is distilled from 100 percent corn and arrives as a pre-distilled neutral spirit that Stielow then runs through Eagle Park’s unique carbon filtration system and cuts with the distillery’s own well water. 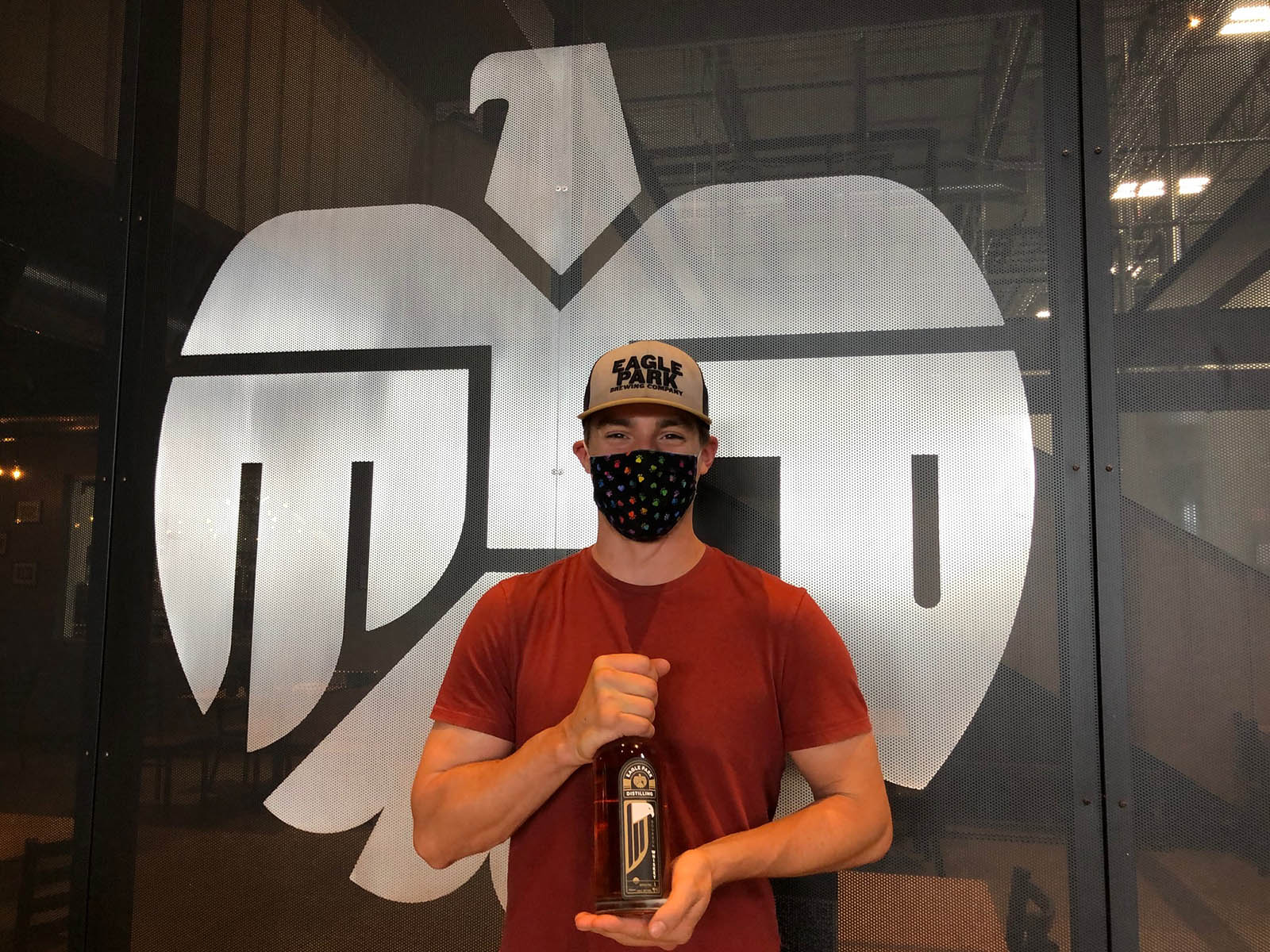 "I thought we were going to create a water profile for our spirits," says Stielow, "thinking we’d be using Lake Michigan water, but instead we’re using well water that is perfect for distilling.

"It creates a great flavor profile and mouth feel."

And the proof is in the vodka, which is viscous and weighty.

"It’s like skim milk coating your throat," quips Stielow, "which is not how you typically describe vodka."

That vodka serves as the base for the gin, which is not, however, filtered because it gets distilled again.

Stielow uses three separate 24-hour macerations. First he macerates and then distills with juniper. Then he macerates the floral and citrus botanicals, and finally the coriandor and horus root-type botanicals to create a trio of spirits that he blends for the right balance.

The current iteration is light on juniper and heavily floral, but Stielow isn’t done perfecting the blend.

Some of the gin is resting in a barrel for a few months, too.

"Gin is such a rapidly growing category, it makes it a lot of fun," says Stielow as he surely sees me eyeing the bottle of bourbon on the table.

"When things get back to normal, that’s something I’ll do in person," he says, noting that he tasted samples that were sent to him at Eagle Park because of the coronavirus shutdown."

Eleven of the barrels were a blend selected by Eagle Park and a 12th cask is a single-barrel selection.

Around 2,500 bottles' worth of the bourbon has been proofed down to 44 percent ABV and will be on sale for $40 beginning this weekend in the taproom.

It’s surprisingly smooth and sweet considering its high-rye mash bill that’s just 56 percent corn, a sturdy 40 percent rye and four percent malted barley. There’s a hint of rye pepper on the finish, but it’s a gorgeous sipping whiskey that’s pulled a lot of vanilla and caramel out of the oak during the three years, 10 months it spent aging.

Meanwhile, three cases of cask-strength – 114 proof – bourbon is being reserved for use in the taproom, where you can order it neat, on the rocks or in a cocktail.

The coup d’etat comes when Stieloh grabs a large lab beaker and a length of hose and pops the bung from a barrel nearby.

As the almost chestnut colored juice engulfs the bottom beaker, Stielow says this is the reserved single-barrel. 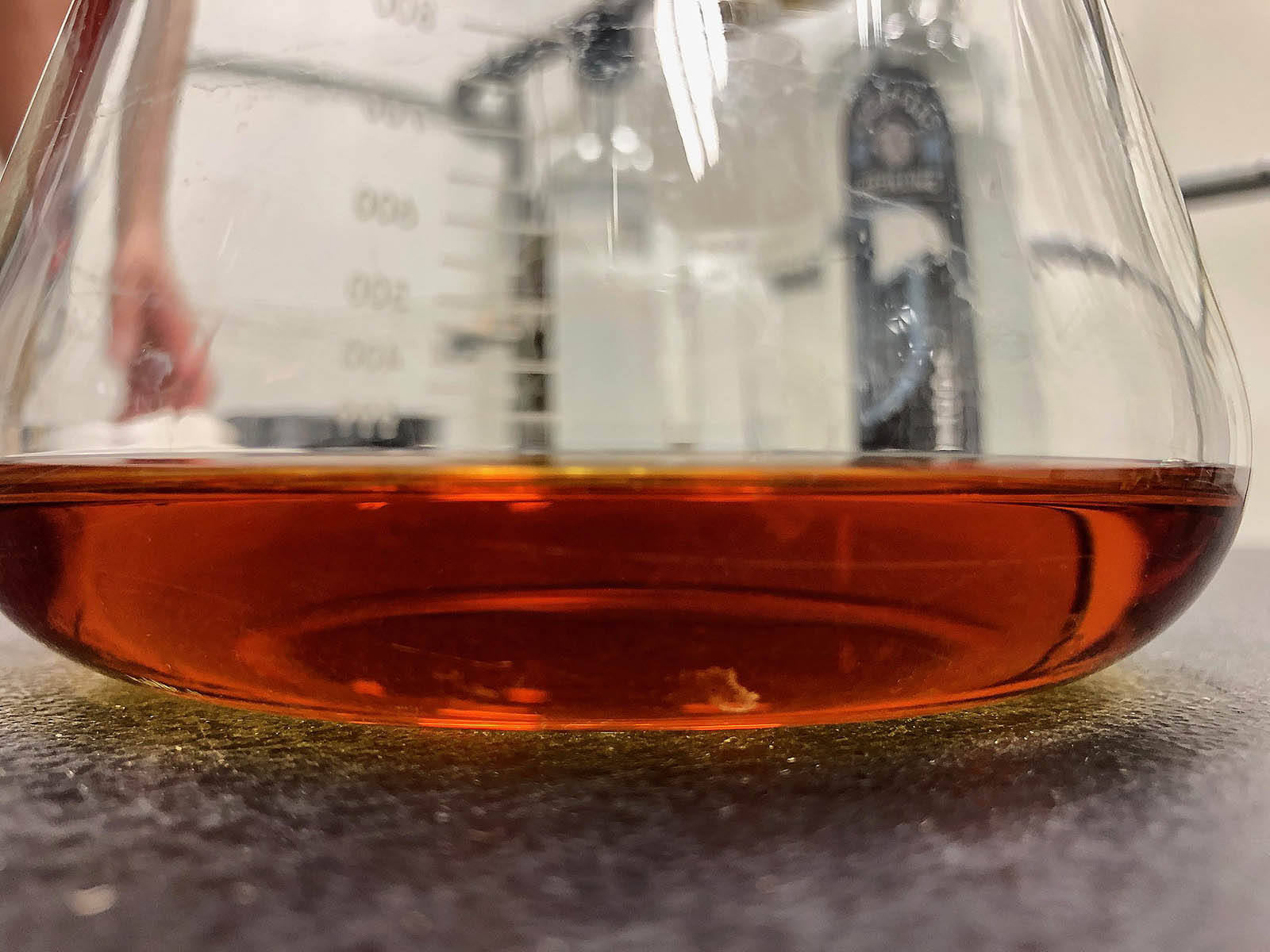 This one is viscous and dark, with a dose of rye pepper on the nose and a quick dash of licorice and butterscotch on the palate, followed by sweet vanilla. A few drops of water and the rye pepper really emerges. A few drops more and almost counter-intuitively that pepper gets even more pronounced.

This is one you’ll have to wait – and surely pay a premium – for.

Stielow is working on label approval and expects it will be released in about a month or two.

That gives Eagle Park’s customers a chance to get acquainted with the new bourbon, says Schinker.

"They can try the 88 proof and then this one and get a different take," he says.

Stielow says that he’s already been talking to other distillers around the country about sourcing whiskey while Eagle Park’s own ages on-site for four years in order to offer a variety of flavor profiles.

He expects another round of whiskey to be ready in about six months or so and word is there are some "super secret whiskey projects" – as well as some new beers, as always – to be announced soon at Eagle Park.

In the meantime, Stielow is excited to finally have some bourbon to share.

"It’s been very exciting; it’s been a long time coming," he says.

"The way that supply chains have been going it’s been a fight to get things done but it just makes the reward that much sweeter."