All of a sudden there are critters everywhere in East Tosa. But don't worry, they're not real. Instead the bird amid the colorful geometric terrain on the side of The Nobleman and the prowling raccoon carrying a fish skeleton in its mouth directly across 69th Street on the side of Cranky Al's are just two of the seven new murals that have just been completed in the neighborhood.

All of a sudden there are critters everywhere in East Tosa. But don’t worry, they’re not real. Instead the bird amid the colorful geometric terrain on the side of The Nobleman and the prowling raccoon carrying a fish skeleton in its mouth directly across 69th Street on the Cranky Al’s building are just two in a series new murals that have just been completed in the neighborhood.

The six-mural project – a partnership between Wauwatosa and Wallpapered City – was the idea of Ald. Joel Tilleson and is part of a series of art installations along the North Avenue corridor, from Lake Michigan to Wauwatosa, called the North Avenue Mural Arts District (NoMAD).

And the bursts of color and form – selected through a juried competition – are populated with a menagerie of both flora and fauna.

Adam Hernandez has a variegated wildcat on the side of BelAir Cantina; Christina Thomas’ painting includes a butterfly and Ivan Roque has rendered a giant fish on the side of TosaYoga on 68th Street.

The monochromatic swirl painted on the Voline Service Station on 69th and North by Matthew Mederer and Max Komorov is the only mural that doesn’t depict wildlife ... unless, perhaps, we’re getting a close-up look at a zebra, which is entirely possible.

Incidentally, Komorov celebrated his birthday while he was painting this distinctive mural, says Tilleson.

"They had to work on this one mostly at night because Voline operates during the day with the service garages open," the alderman says. "Max's friends drove up from Chicago on the night of his birthday to celebrate with him while he painted."

And then there's the bonus mural on the side of the Alfa Flower Shop at 70th and North by Milwaukee-based Nykoli Koslow.

"Nykoli is painting the Alfa Flowers building at 70th and North," says Williams-Ng. "This mural was not a part of the original project and was not juried by the Tourism Commission, but was a separate sponsorship by TripSavvy which allowed another business to have a mural in the neighborhood, and in the same corridor."

And, yes, there are creatures in Koslow's mural, but I can't accurately identify them.

The mural painted by Eric Ricks on The Nobleman continues down onto the sidewalk, a feature that, according to Tilleson, required special permission from the Wauwatosa Board of Public Works.

Christina Thomas, who, on Sunday finished her painting of a woman on the west-facing wall of the Heartland Information Services building on North Avenue near 65th Street is a neighborhood resident and a first-time muralist.

"Christina also bonded with the building owners, Don and Kate Hill, who spent significant time with her and ate with her while her piece was being installed," Tilleson tells me.

A ribbon cutting was held last Monday evening for the works, even though only three of the seven were then complete. 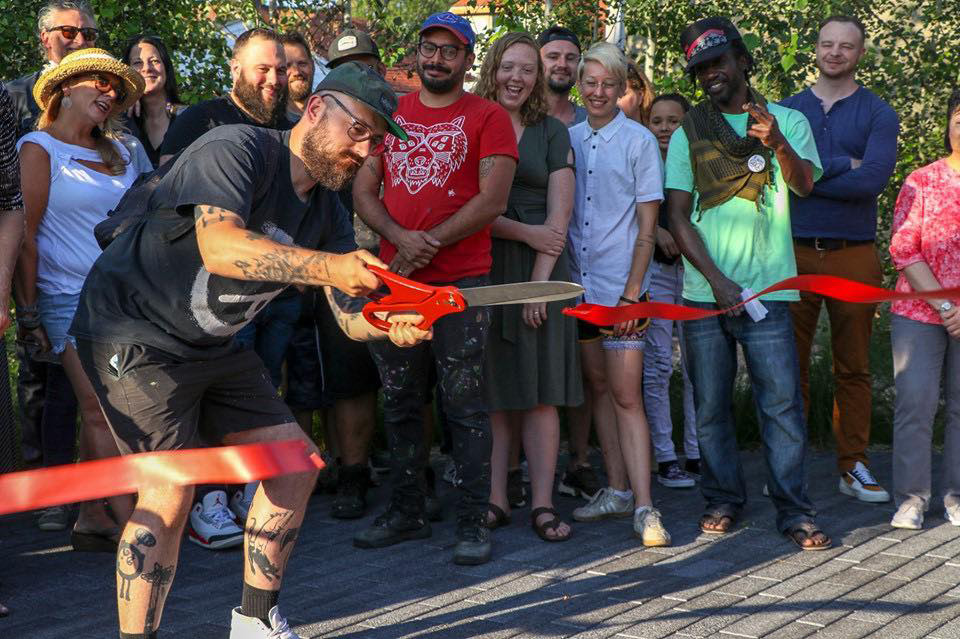 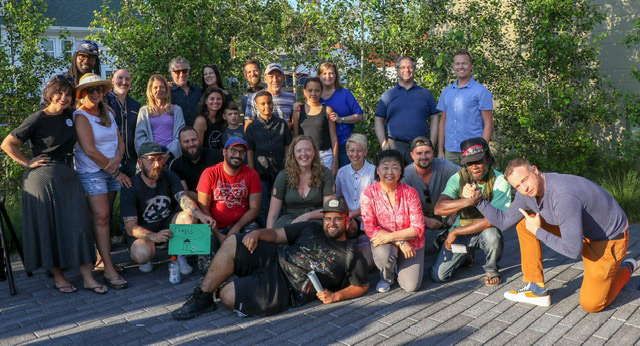 "We had one artist departing (on Tuesday)," says Wallpapered City’s Stacey Williams-Ng, "(and) we wanted to celebrate while all were in attendance."

The remaining murals were finished in the past few days, and the results are truly amazing. This lively neighborhood had its share of big blank walls, but now many of them are "wallpapered" with bright colors and eye-catching images that spark wonder.

"My expectations were exceeded by a long shot," says Williams-Ng, who was the force behind Black Cat Alley on the East Side, too. "Truly, the murals are just stunning as works of art. But more than that, I was really so happy with the artists themselves.

"Joel and I were talking about this last night at the opening – you never really know who's going to show up when you invite a series of strangers to come and visit, and we got such a wonderful group of people whose personalities really gelled, and who I think will stay in touch for life. They have all really bonded and shared so many great stories together while they've been in Milwaukee. There are going to be some tearful goodbyes, I tell you. I'm already getting emotional. I love these dudes."

"The artists that came to Wauwatosa from near and far to beautify our city were not only excellent ambassadors from the global art community," he said.

"They shined brightest in their interactions with our own curious and excited community as ambassadors on behalf of the City of Wauwatosa and the East Tosa neighborhood. For that, I will be forever grateful."

Here are all the completed murals: 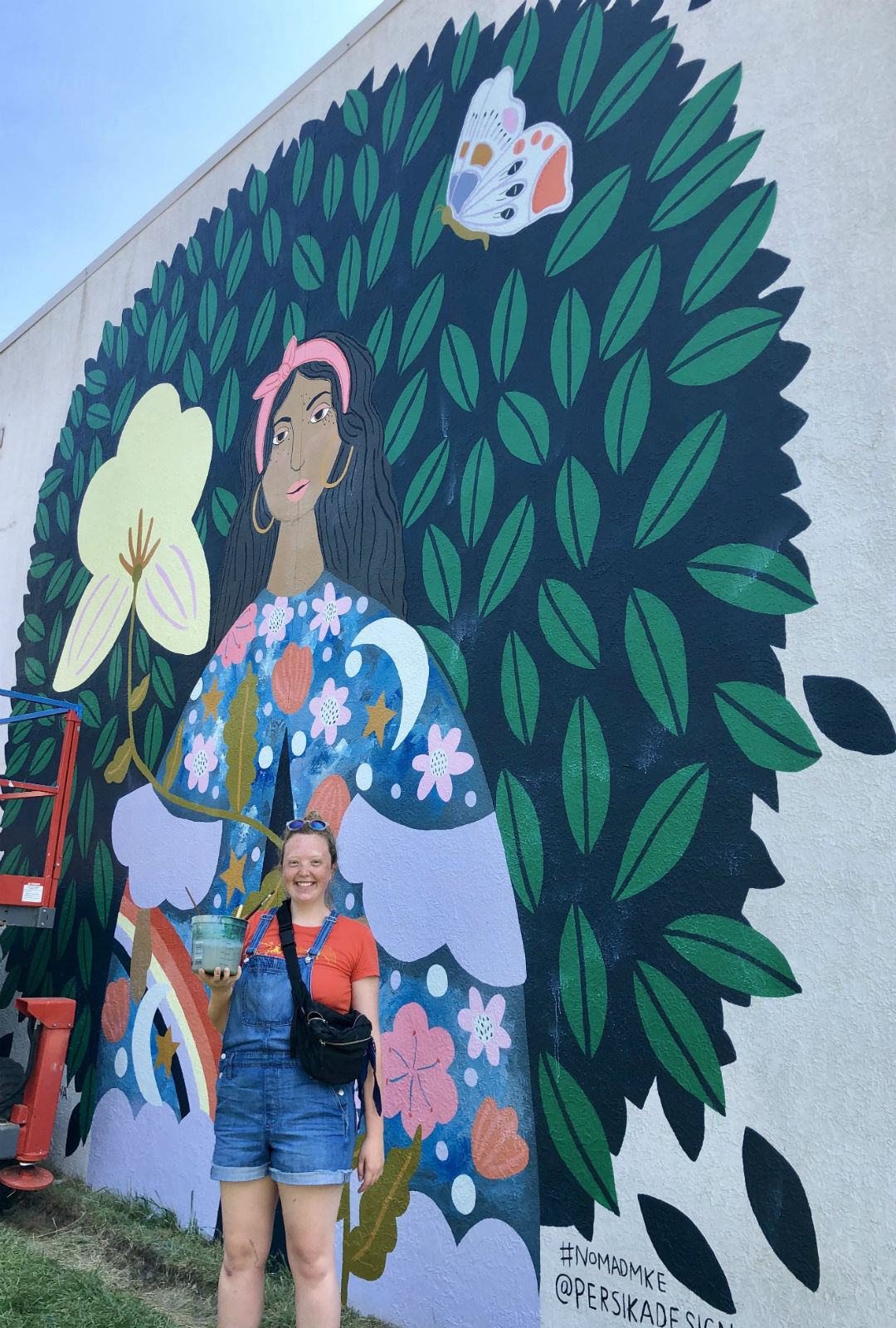 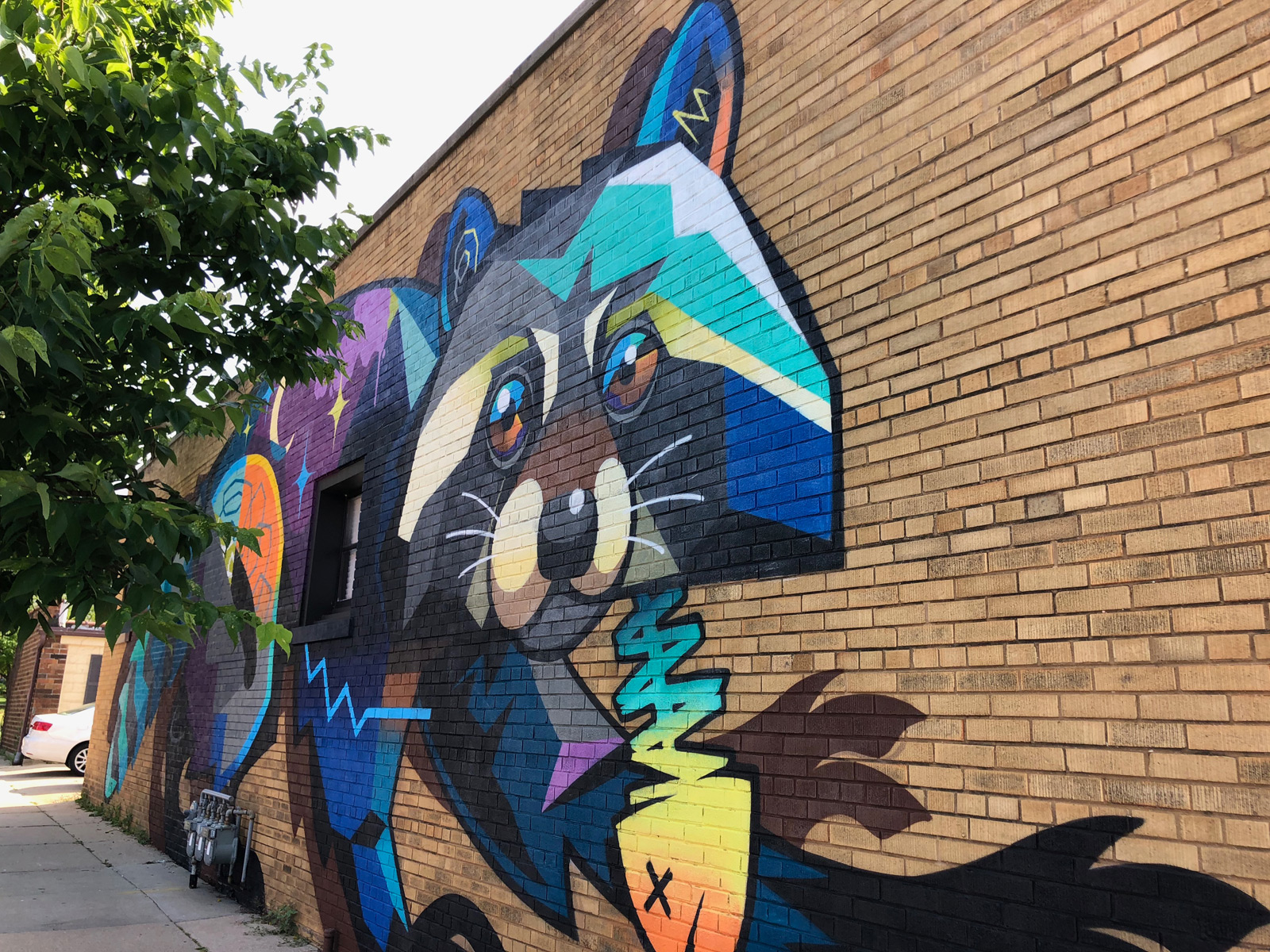 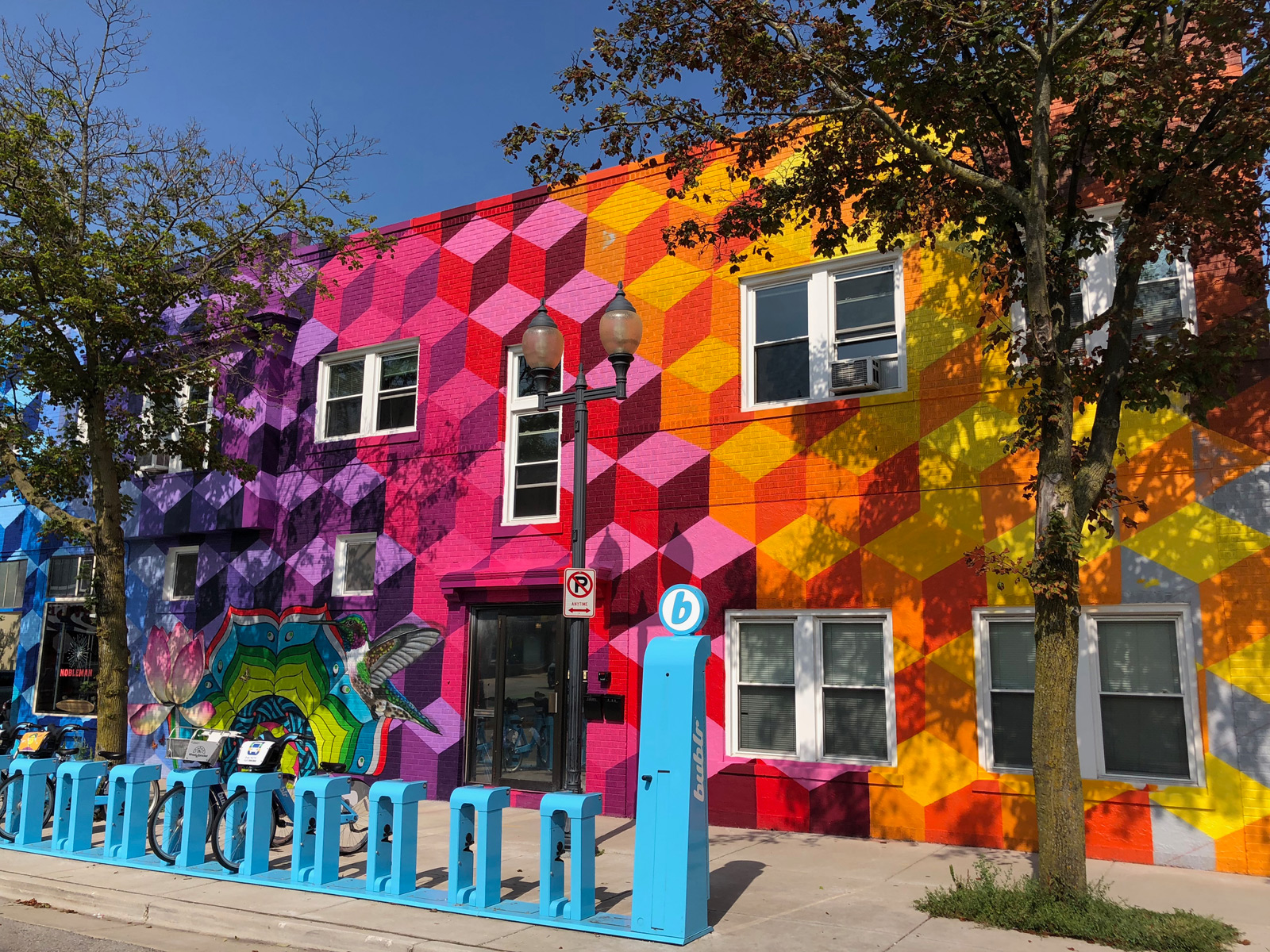 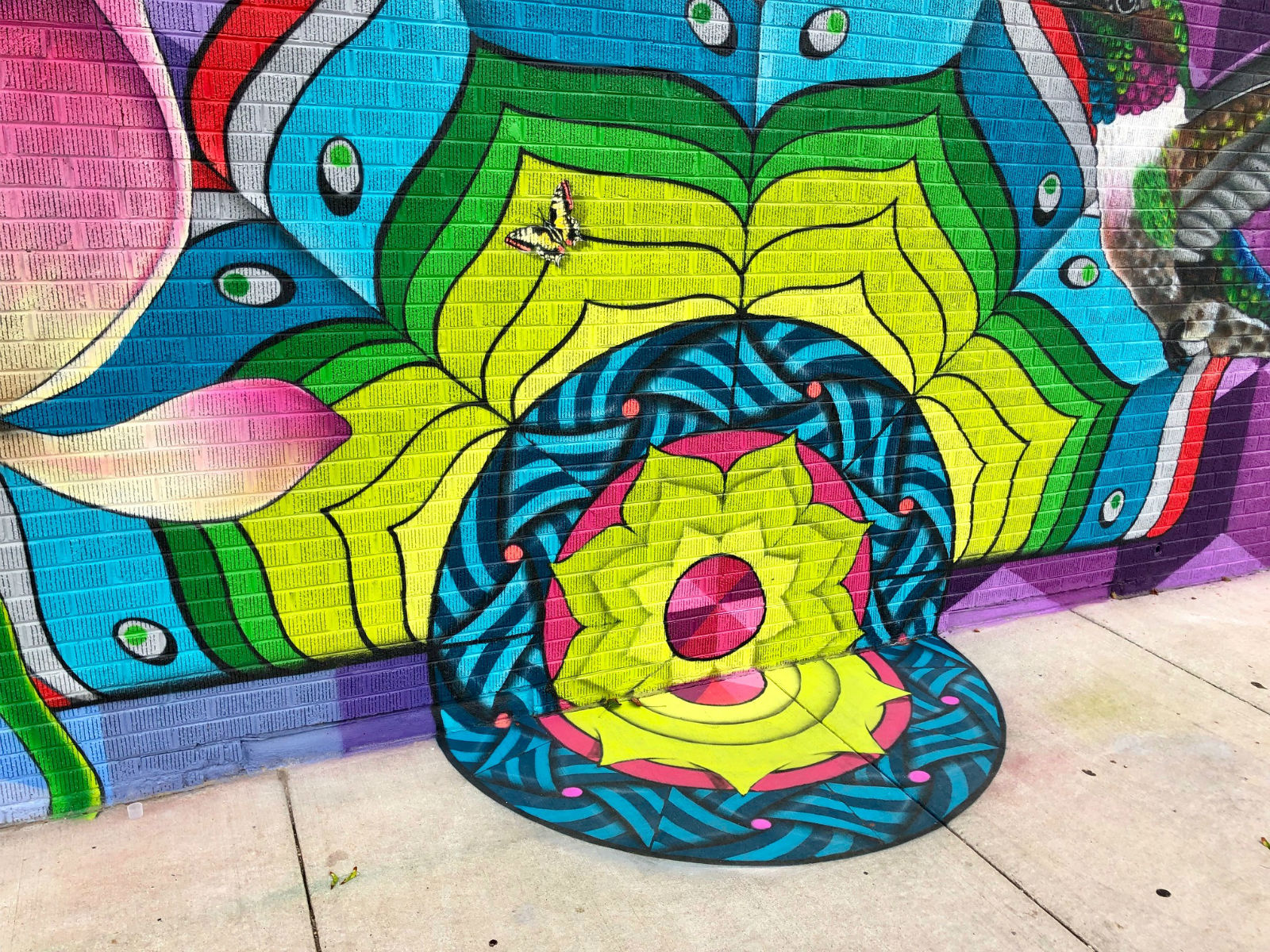 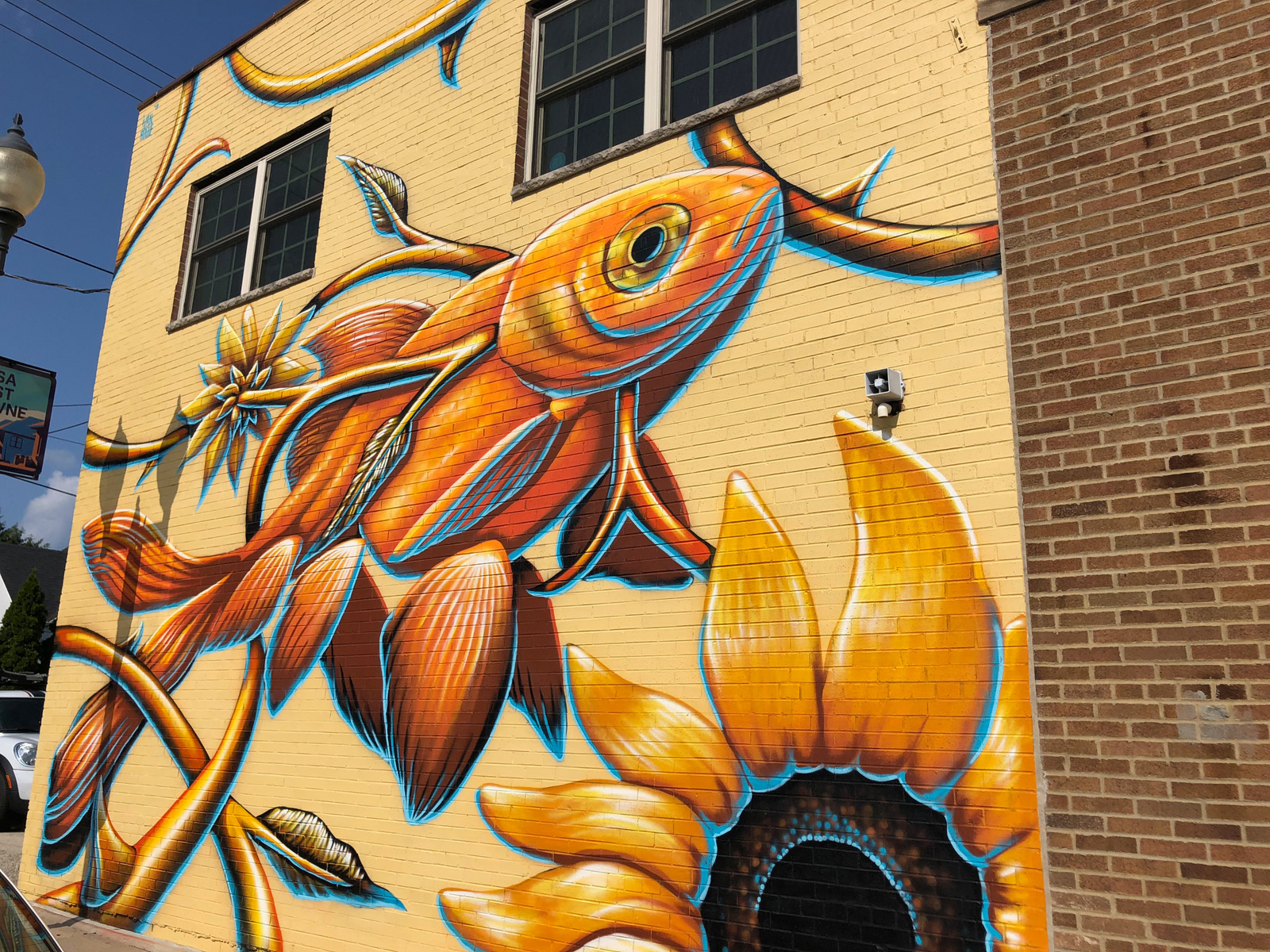 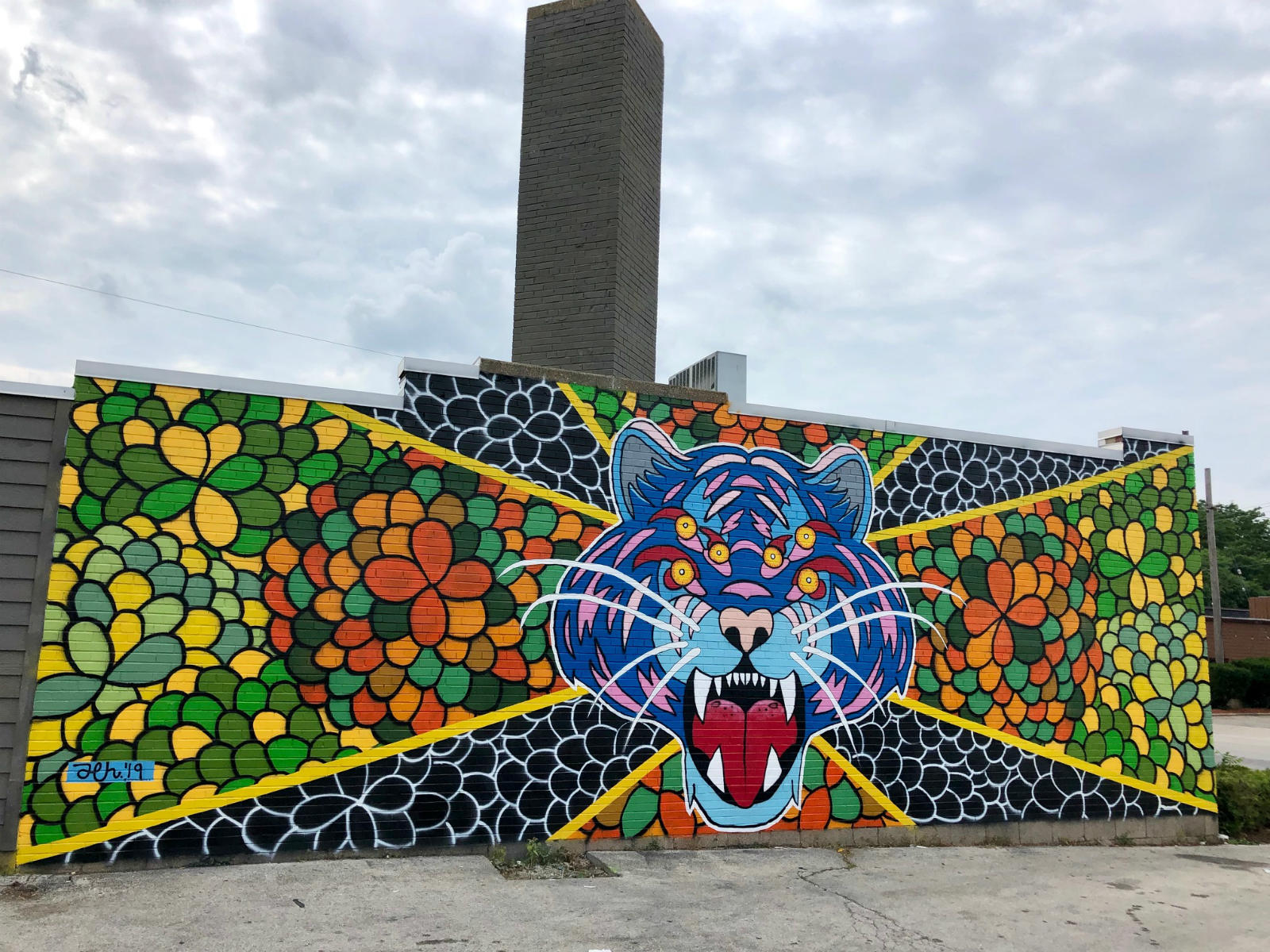 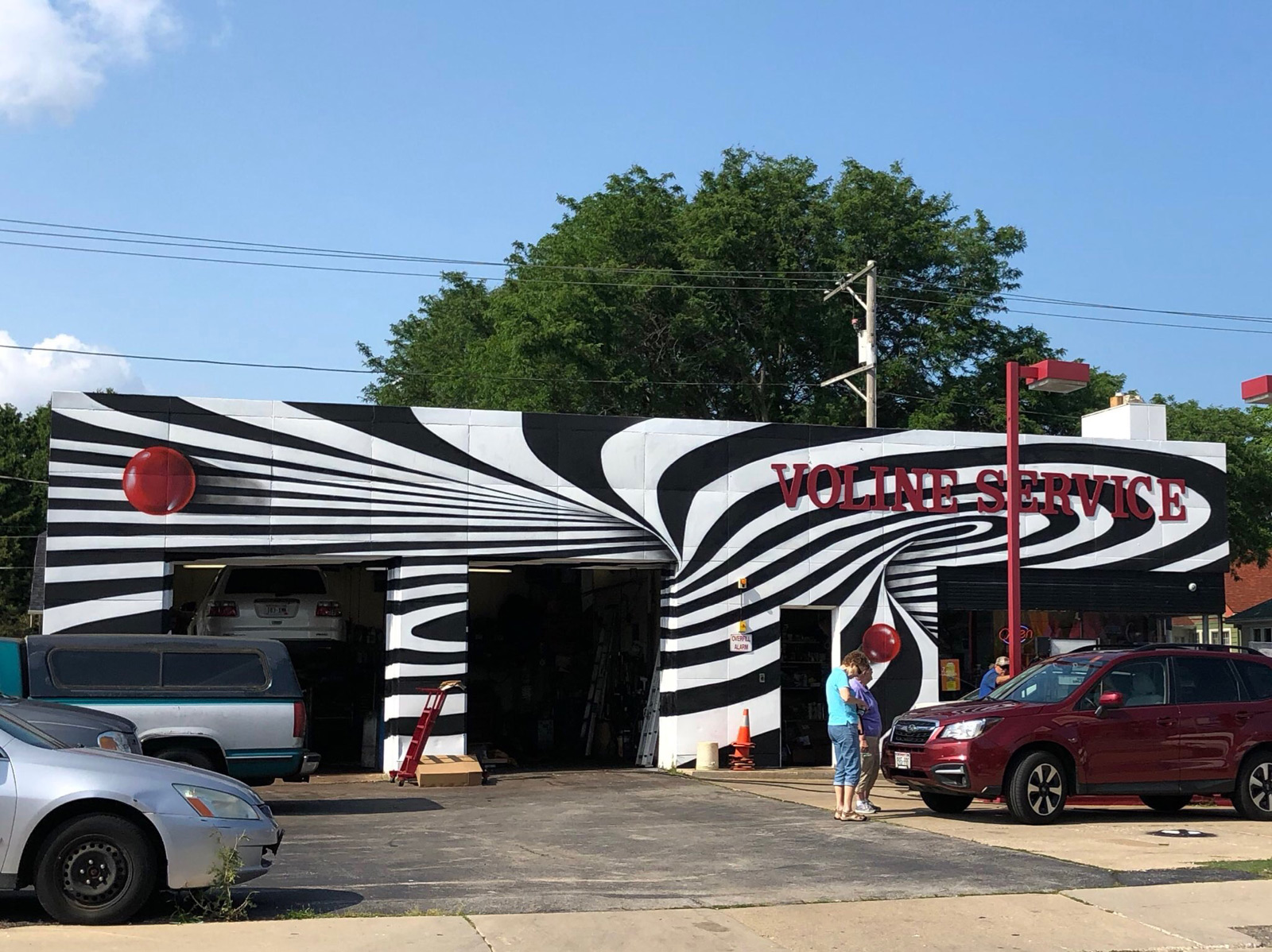 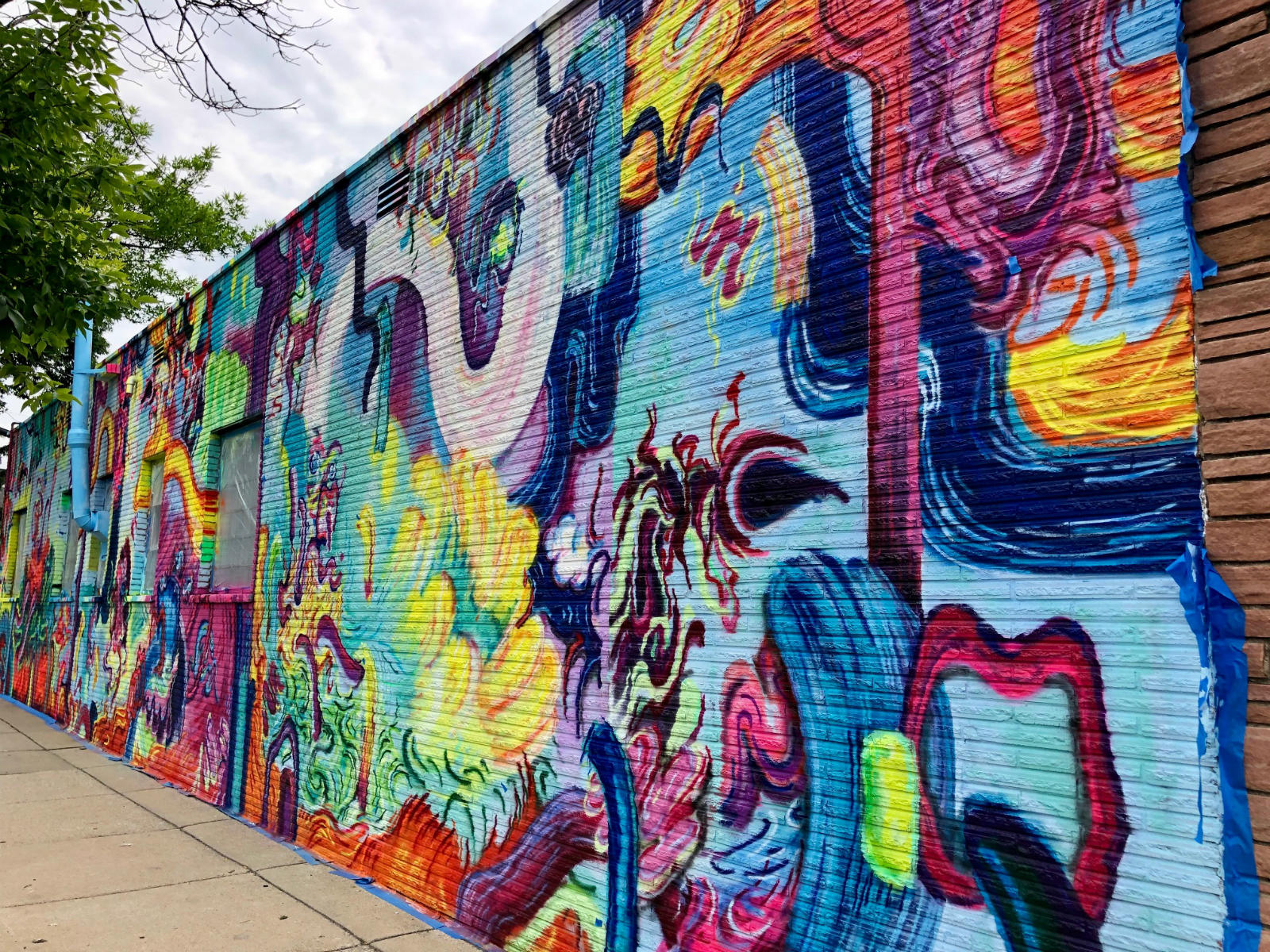 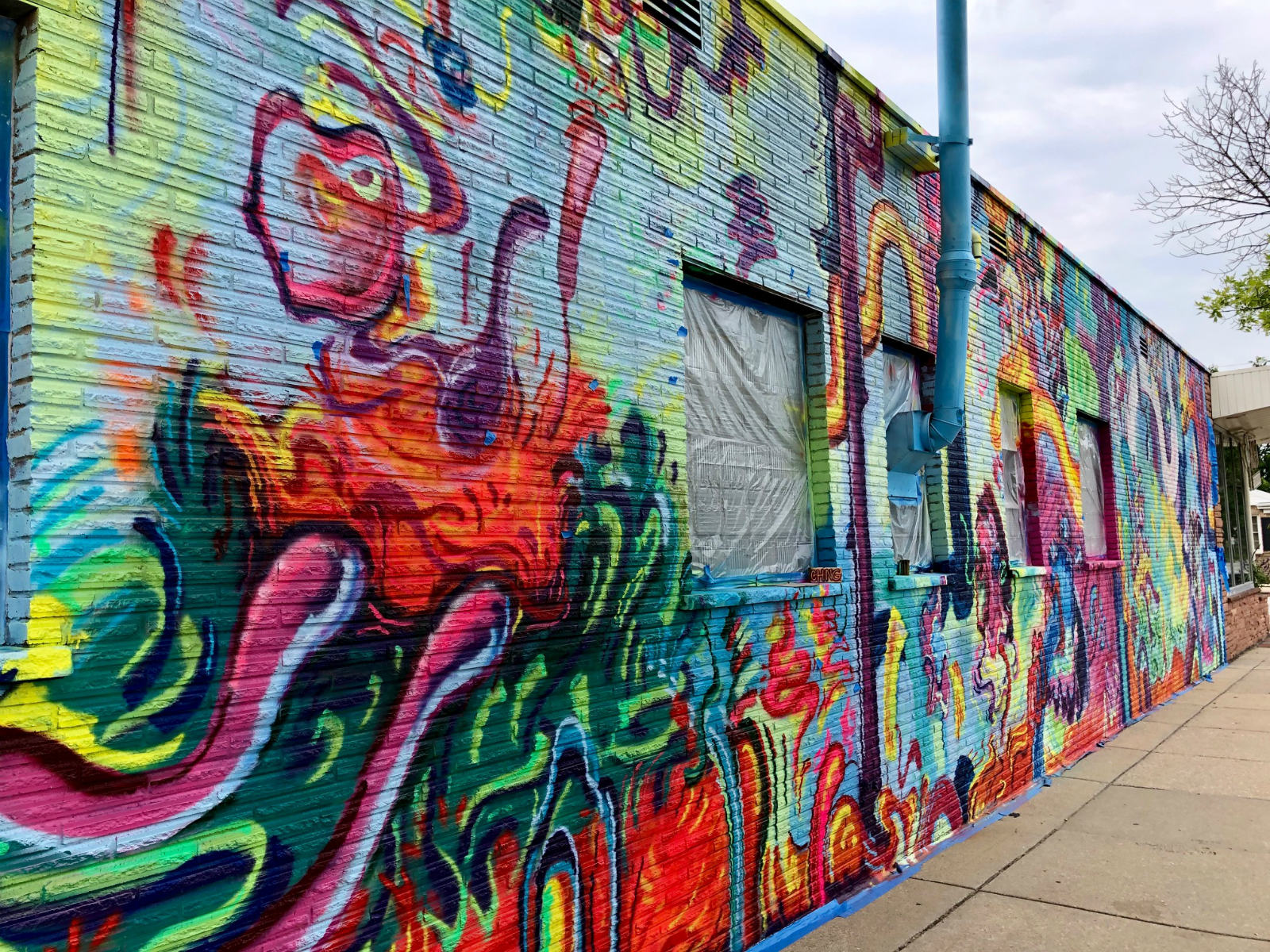