Excavation lays to rest talk of old East Side cemetery

When folks dig, I always hope something turns up. Except, that is, when excavation began in June for a new addition to Maryland Avenue Montessori School on the East Side, where I am a member of the School Governance Council and also served on the building addition team.

Whenever I see crews digging, I wonder if they've found anything interesting.

In the basement of the UWM Panther Arena, recent excavation unearthed cream city bricks, presumably from buildings that once stood on the site on North 5th Street.

A while back, I saw photos on Facebook of some antique bottles found when the old Faust Music building was demolished last year on South Kinnickinnic Avenue in Bay View.

I'm always hoping something turns up. Except, that is, when excavation began in June for a new addition to Maryland Avenue Montessori School on the East Side, where I am a member of the School Governance Council and also served on the building addition team.

In that case, I hoped nothing would turn up.

Actually, I did hope some interesting things would be turned over with the soil – just not bones. That would slow the project and disturb the dead.

For years, kids – and some adults – have suspected that the school, built in 1887, is haunted. I don't buy that, really, but when I learned that the school sits atop an old alms and pest house cemetery, I admit I shuddered a bit.

In the 1840s, the land above North Avenue wasn’t yet part of Milwaukee. In 1846, the old Town of Milwaukee purchased the land where the school is from Scottish immigrant James Murray and his wife Margaret, whose surname is memorialized in the neighborhood’s Murray Avenue.

Murray was also a charitable man who donated some of his land – including, perhaps, this tract – for the construction of orphanages and old-age homes.

That tract ran from North Avenue to Bradford, Maryland over to Lake Drive. In its earlier years, the land included a reservoir – beneath what is now the Catholic Home – as well as a couple streets that no longer exist, including Sheridan Avenue, Hydraulic Avenue and two sections of Summit Avenue. 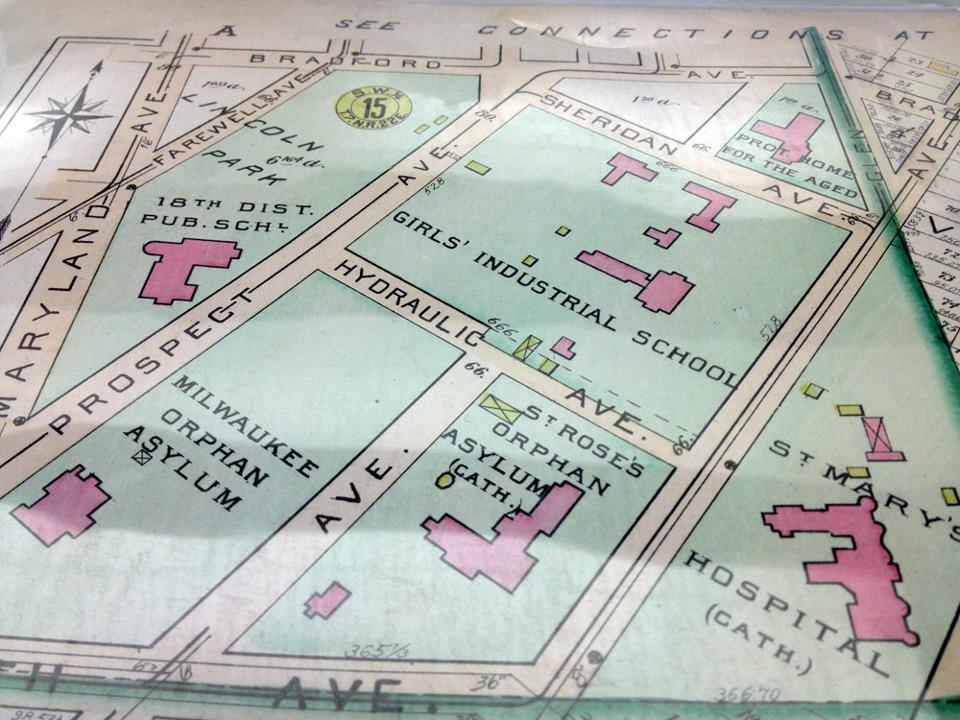 The land has also been home to the Girls Industrial School, the Milwaukee Orphan Asylum and St. Rose’s Catholic Orphan Asylum.

And by the end of 1840s – the City of Milwaukee got the land from the Town in 1847 (later, merchant John W. Pixley appears to have owned it, selling it back to the City in 1862, though it's unclear how Pixley, a land speculator and a dealer in tax titles, acquired it) – there was what has been called the alms (poor) house and the alms house farm on at least part of the land. There was also St. Mary’s Hill Hospital across Lake Drive. Up on Oakland Avenue, somewhere near present-day UW-Milwaukee, was the pest house, an isolation hospital for the contagious.

In 1849 and ‘50, Milwaukee was ravaged by a cholera epidemic that began in July with a victim that lived on East Clybourn Street. In the first month, 104 Milwaukeeans died of the disease.

According to the 1881 "History of Milwaukee," published by The Western Historical Company, "Men, women and children were dying all around – falling in the streets; breathing their last agony in houses, only to be deserted by family and friends; sinking down on the piers before putting foot into the city; dying on the boats."

After subsiding, the disease returned the following year and, in the end, more than 300 died of cholera here.

And many of them were buried in shallow mass graves in a cemetery on the alms house farm.

"Corpses were piled onto rough carts and hauled to the poorhouse burying grounds, where they were buried in ditches for lack of time to dig separate graves," according to a 1946 newspaper article. "Undertaker Fred Zander was the busiest man in town, and the sound of hammer and saw could be heard coming from his house at all hours. He built all the coffins for his business."

Another news article points to that Western Historical Co. "History of Milwaukee," that noted, "for two months in 1849 the poorhouse burying ground was pressed to suffocation with burials. The rough carts, sometimes containing four or five corpses at once, rumbled through the streets, while the remains of many in better circumstances were borne along to other resting places more gently in appropriate vehicles."

Within just a few decades, Milwaukee had managed to forget about the cartloads of the dead rolling slowly, solemnly through the streets. So, it was a newsworthy event when, in March of 1887, as workers were excavating to build a beautiful new cream city brick First Ward Branch School building – designed by no less than Henry C. Koch, architect of City Hall, The Pfister, Gesu Church and Turner Hall – that the old alms house cemetery was rediscovered.

"The new First ward branch school house between Farwell and Prospect avenues, south of Bradford street, is being erected at the grave-yard of the old pest-house," reported the Milwaukee Sentinel.

"The excavations for the basement and foundations have brought to light a large number of human bones and skulls, nearly all in an excellent state of preservation. The city pest-house was located near the site in 1850. ... Old residents may well remember the cemetery, as in those years many of the graves were fenced in by low railings."

The bones were reportedly removed to another cemetery and that was that.

In 1950, the Maryland Avenue School was to get a new gym/cafeteria addition to the north of the oldest part of the school, the part where the bones had been found.

"A power shovel, excavating for a new addition to the Maryland Avenue school some weeks ago, turned up human bones and an almost forgotten chapter of Milwaukee history," wrote the Milwaukee Journal.

"Milwaukee Public Museum scientists and historians who examined the bones and started research into old maps, newspaper files and other historical data, found that the burial spot was once part of the Milwaukee almshouse farm. There, they believe, the dead were hastily buried in the great cholera plague which swept the community in 1849 and 1850. The recently found bones and bone fragments were only 18 inches below the surface, buried haphazardly in ditchlike depressions."

So you can imagine, when MPS installed a couple temporary classrooms just east of the gym addition a few years ago, my first question to a friend in the district’s facilities department was, "Did you find any bones?"

There was no excavation, though, for that project, since those rooms – which will be removed next summer when the new classroom addition is complete – just sit on some footings, rather than on a permanent foundation.

But this time around, the digging – to the north and east of the gym – would go deeper. At least four feet was the plan – and in some spots, they went down closer to 10 feet to find suitably firm soil. 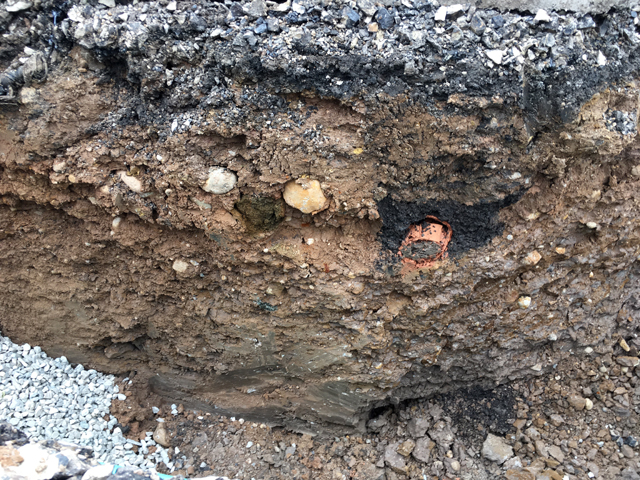 On day one of the digging – to re-route a sewer line – I went over, and I gazed upon a pile of dirt and down into the trench (pictured above). Nothing but fragments of an old clay drain tile. As work progressed, I asked the workers on site and others are involved in the project, "Find anything?"

In the end – excavation is now complete – no bones were found. So it seems safe to say that whatever remains were at the site have now long since been moved or will rest in peace until some future digging on another part of the site reminds Milwaukee again of this dark chapter in the city’s history.

And no, I still don’t believe the school is haunted.