Every restaurant has a story. For Eldr + Rime, which made its debut just over two weeks ago, it's a story with roots in Scandinavia that's told through the elements of fire and ice, thoughtfully chosen ingredients and an environment that aims to capture the welcoming, authentic spirit of hygge.

Every restaurant has a story. For Eldr + Rime, which made its debut just over two weeks ago at 2300 N. Mayfair Rd., it’s a story with roots in Scandinavia that’s told through the elements of fire and ice, thoughtfully chosen ingredients and an environment that aims to capture the welcoming, authentic spirit of hygge. 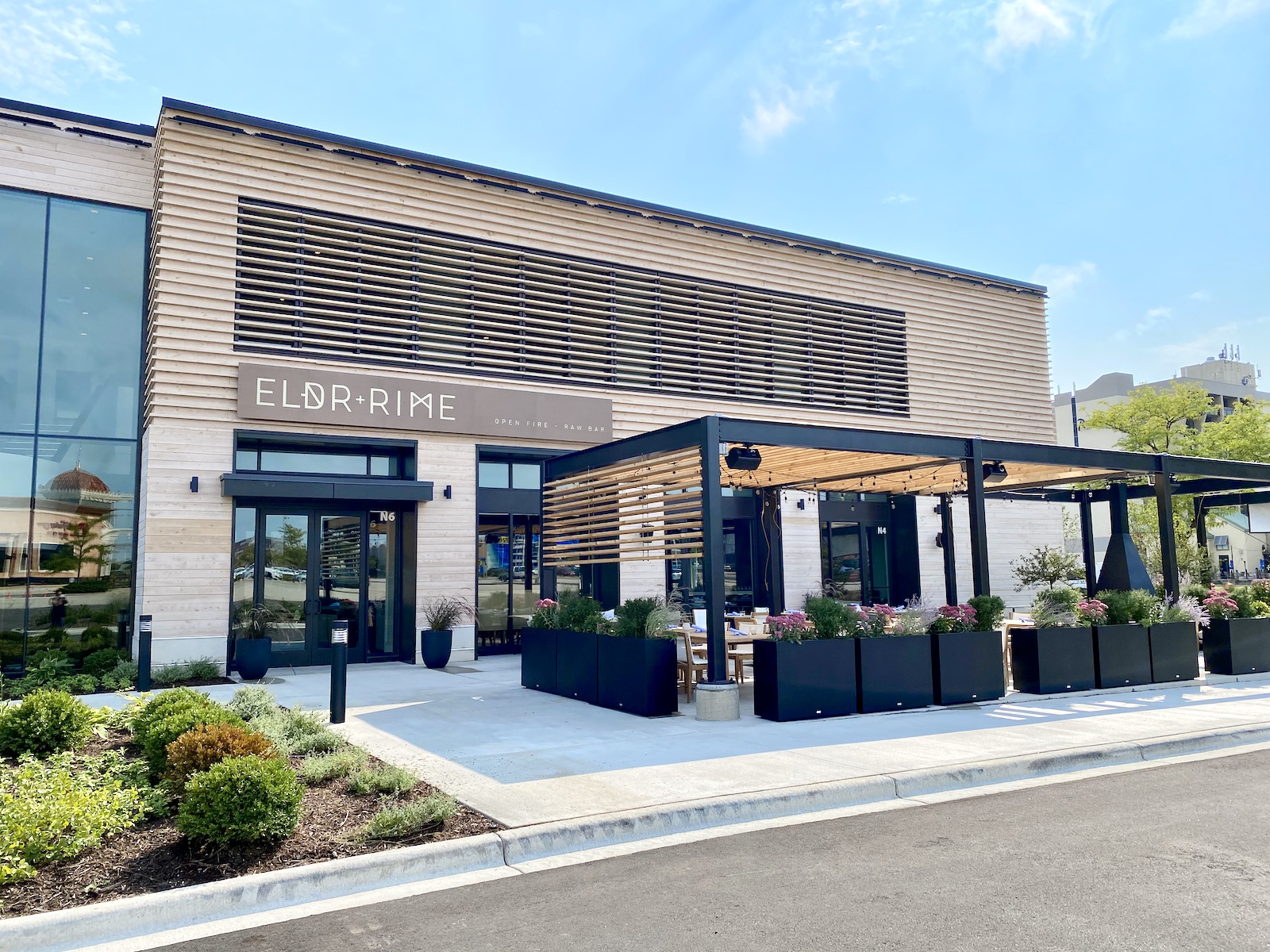 It's the little things

Hygge (pronounced hoo-gah) is a concept focused on the contentment found in little pleasures. It's a Danish term which finds its origin in the sixteenth-century Norwegian word "hugga," which means "to comfort." Unsurprisingly, it’s also related to the English word "hug."

It’s the sort of feeling you might find in a cup of leisurely morning coffee and a warmly spiced cardamom bun, the Swedish cousin to America’s cinnamon roll. You’ll find that at the Eldr+Rime Marketplace, a grab and go counter which serves a combination of coffee, tea, baked goods, sandwiches, and salads, which can be enjoyed either at the restaurant or picked up on the go. 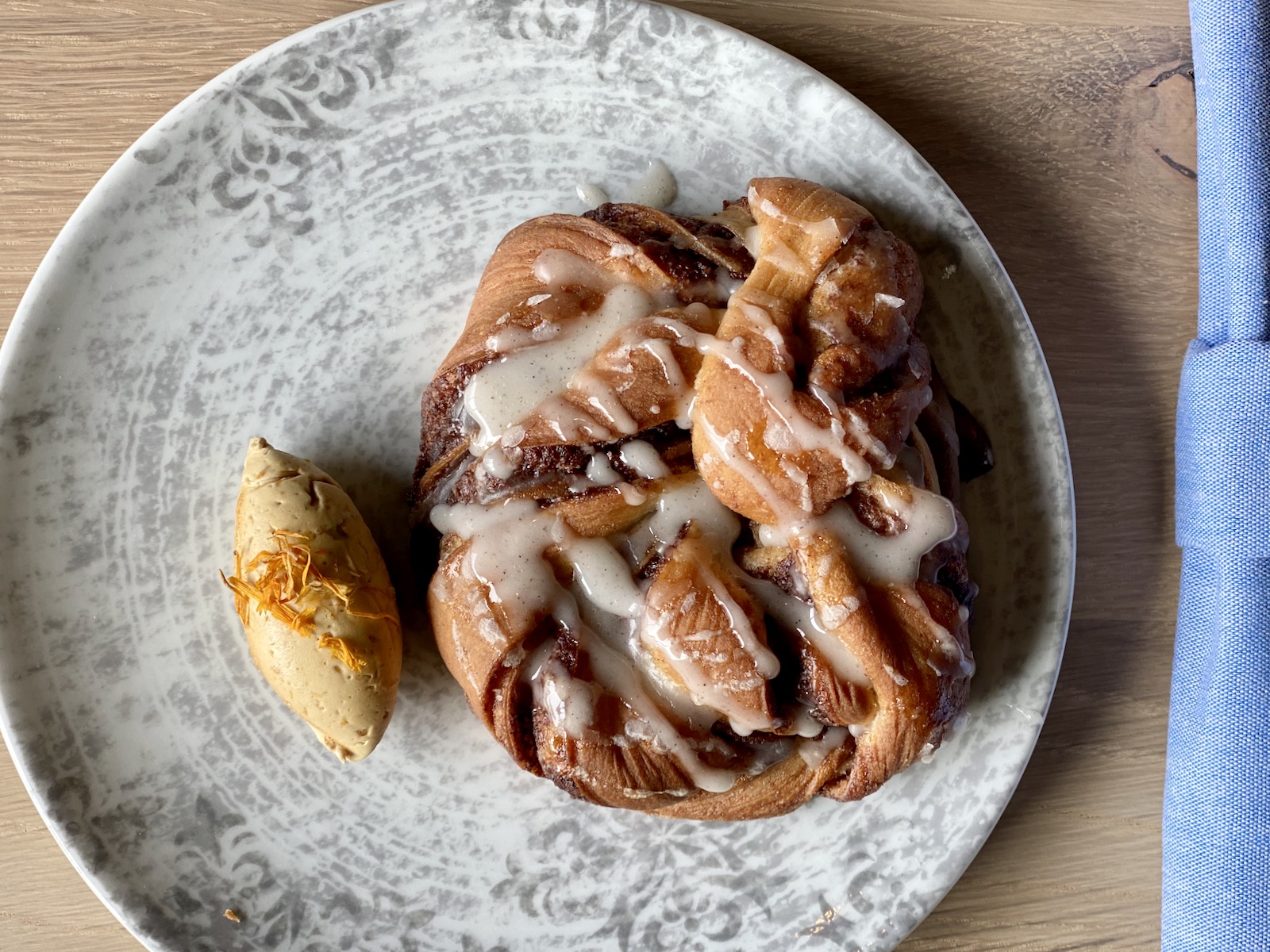 It's a feeling  you could sustain on their beautifully appointed outdoor patio, which combines simple modern furnishings with beautiful plantings. 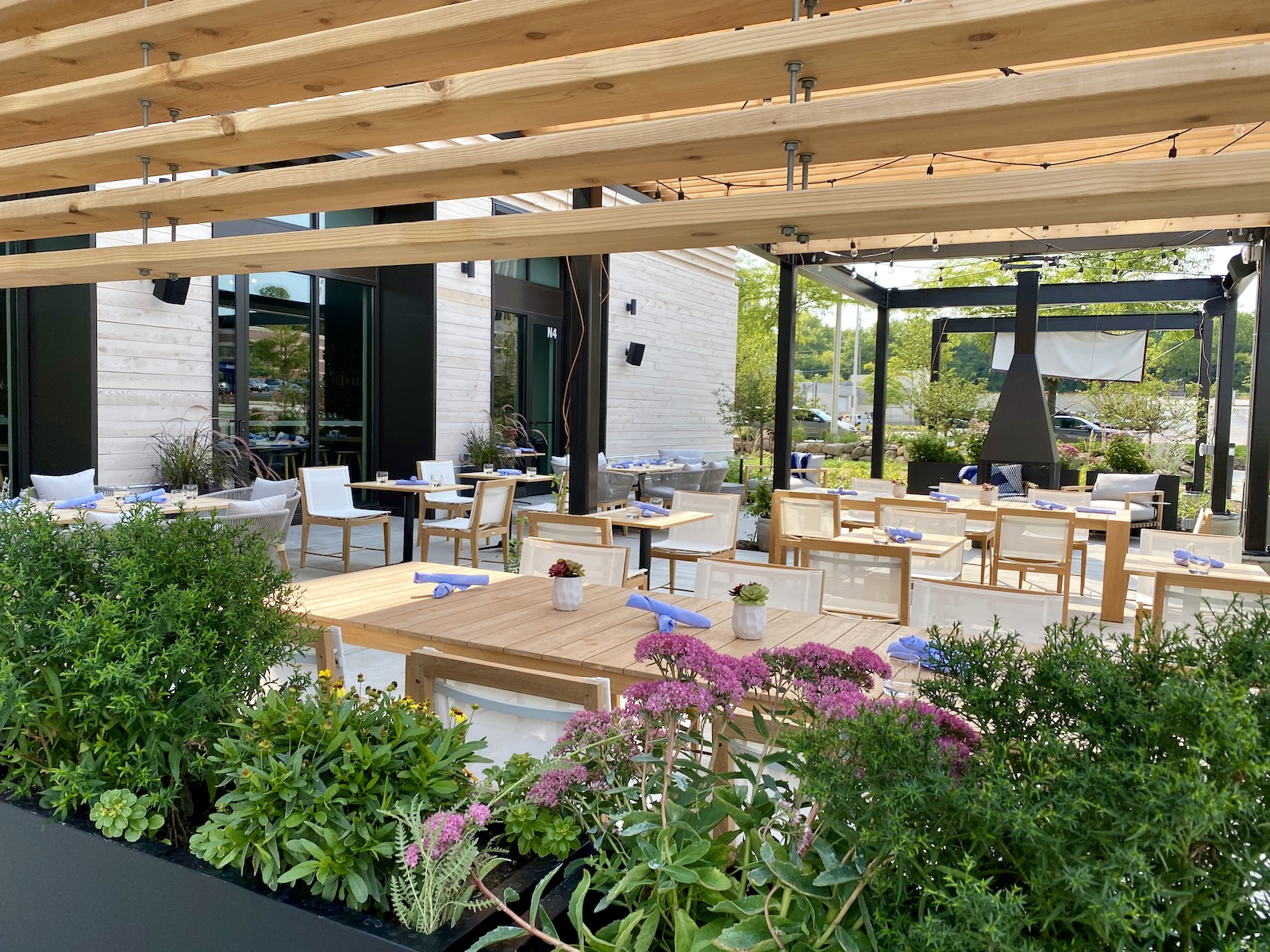 The area includes an outdoor fireplace, lounge furniture and strategic tree plantings that might make you forget you're anywhere near the bustle of Mayfair Road. 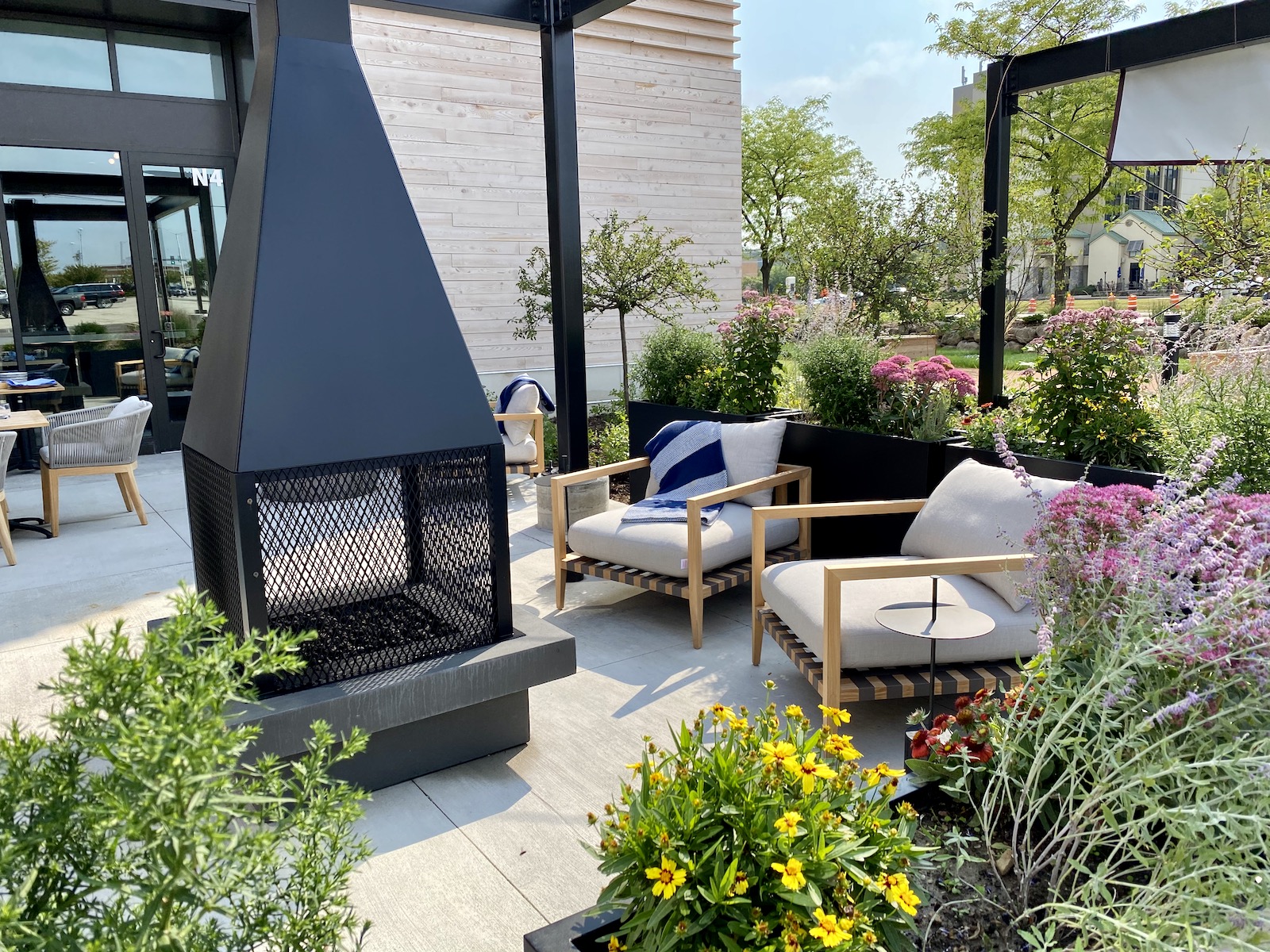 It’s also the feeling you get stepping into the large, socially distanced dining room, which showcases the warm tones of birch and oak set against soft blues, cool slate, natural fibers and greenery. 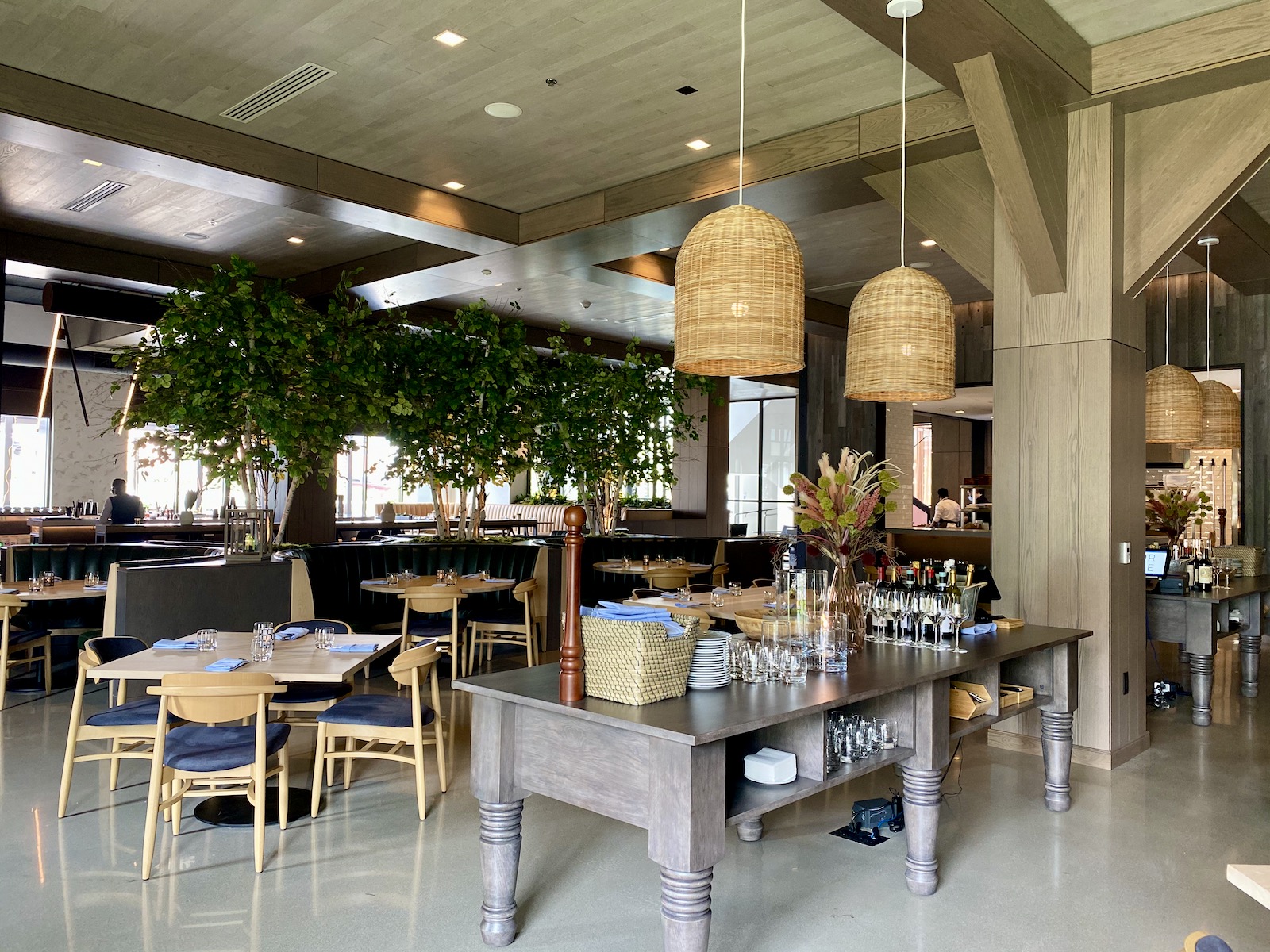 It's a space that showcases both sleek, modern Scandinavian-style seating along with cozy booths shaded by indoor birch trees. 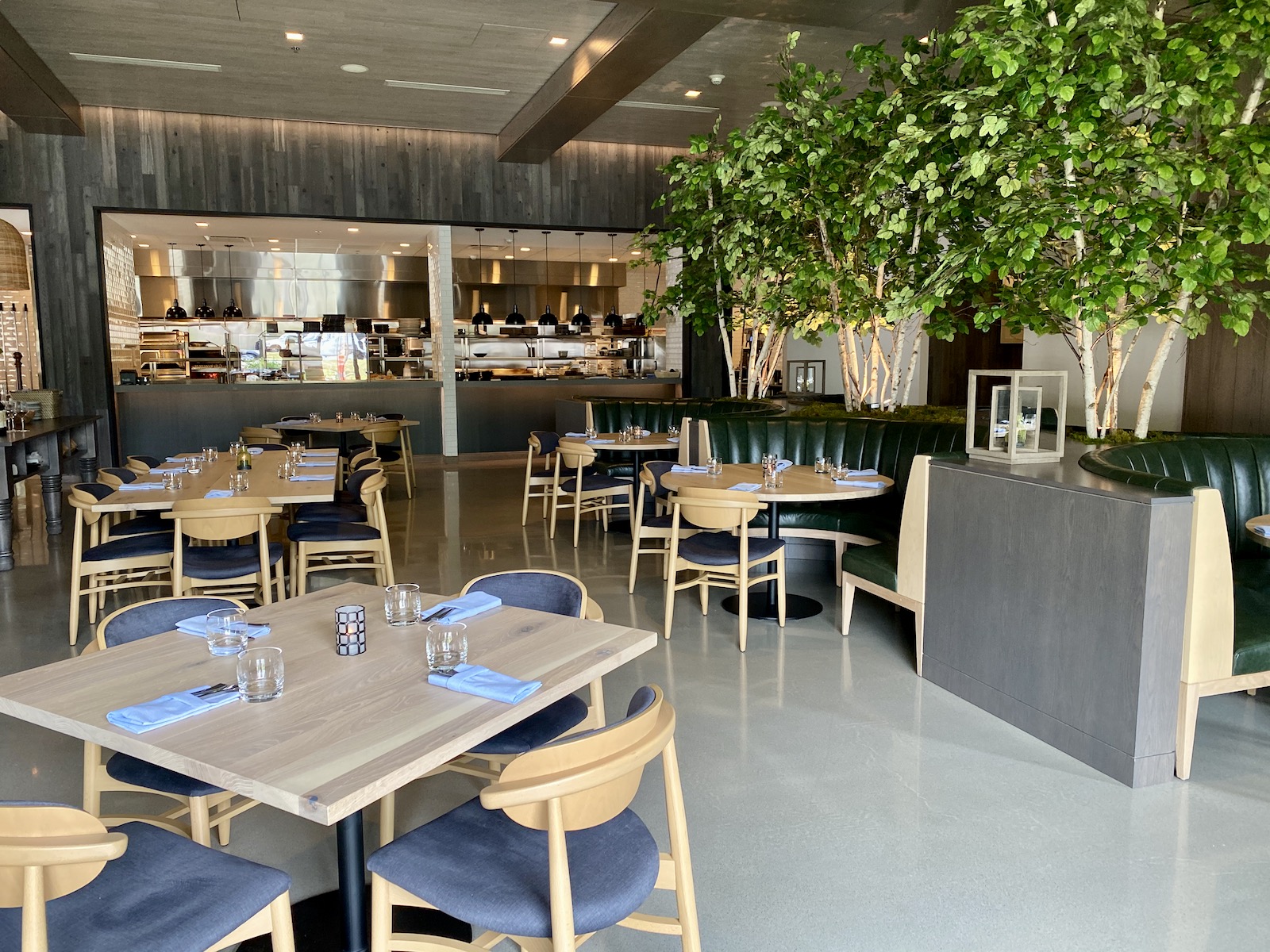 At the culinary helm of Eldr+Rime is Executive Chef Gary Baca, whose career includes recent work with Micheal Jordan’s Steakhouse and Lettuce Entertain You in Chicago; and Executive Sous Chef Alex Lyskowsicz, former executive chef for the Iron Horse Hotel.

"We’ve woven Scandinavian flavors into the menu in innovative ways," he says, noting that the name Eldr+Rime, which is Old Norse for "fire and ice" plays a role in the way they prepare food."

The menu lends itself to the creation of a mini smörgåsbord featuring breads, cheeses, fish, meats and snacks. But it can also be enjoyed in a more traditional, coursed fashion with appetizers, salads and entrees.

"Bread is such an important element on the Scandinavian table," says Baca. "So we wanted to be able offer a variety, including dark, seeded Danish rye and flatbread."

Nordic rye flatbread is baked in the wood-fired oven and brushed with whipped butter and local honey ($12). It’s served along traditional fermented skyr, an Icelandic dairy product consumed much like yogurt. The skyr counters the sweetness of the honey, while the sour flavor helps to pull out the subtle notes of caraway and rye. 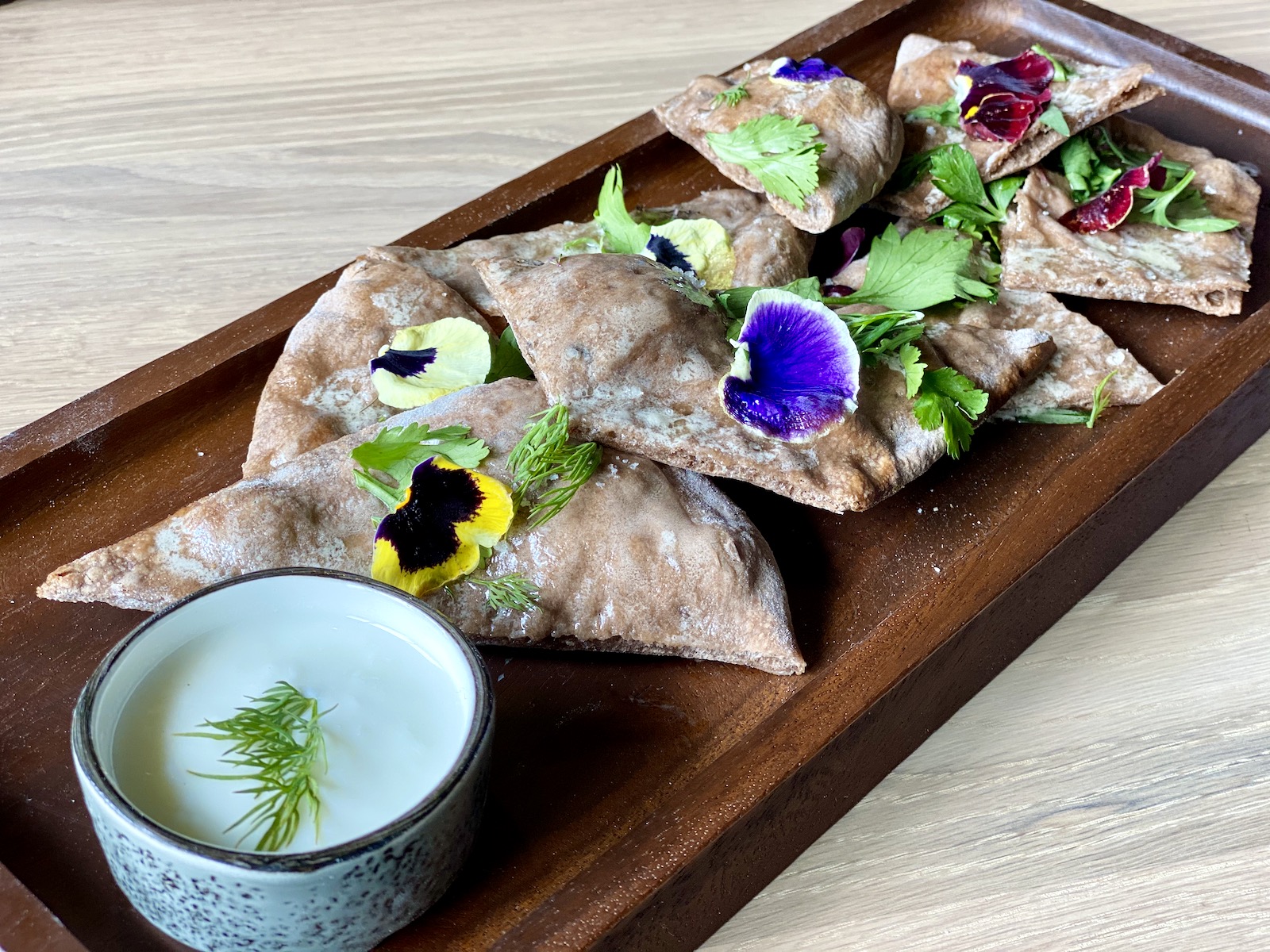 Meanwhile, sturdy Danish rye flecked with pumpkin and sunflower seeds is served alongside a trio of cured salmon and accompaniments, including pickled vegetables, Norwegian mustard sauce and charred scallion smear ($18).

The salmon itself is presented three ways: cold smoked (on the right), brined and hot smoked over the live fire (center), and cured with beets, allspice, cloves and Alpine botanicals including juniper and dill (on the left). 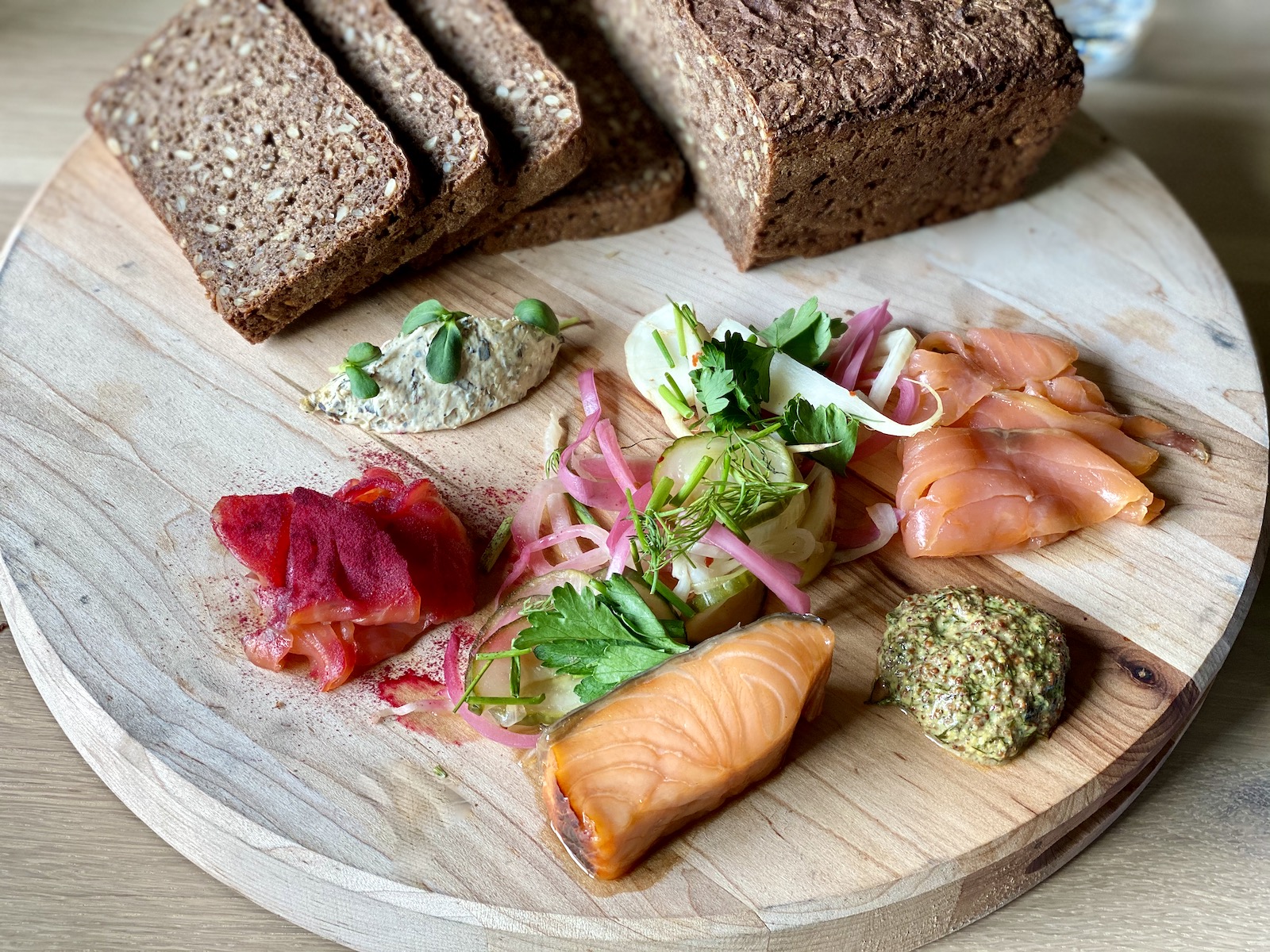 Some traditional Scandinavian dishes are made true to form, but are presented in a unique format. For instance, classic Swedish meatballs are presented in slider form on potato buns with lingonberries, house pickles and grainy mustard ($14).

Others pay homage to foraged elements and the natural world, like fresh venison tartare served with blueberry aigre-doux, smoked and pickled spring onions, quail egg and a beer-raised waffle ($16).

Potatoes, a common starch in Scandinavia, often appear in dumpling form, mixed with flour and stuffed with a savory filling.

"We’ve taken the idea of the traditional potato spelt dumplings and given them a local twist," says Baca, "By filling them with beautiful Clock Shadow cheese curds."

The creamy cheese-filled dumplings are breaded, fried and served alongside intensely flavorful jam made with dehydrated seasonal strawberries and a chive creme fraiche ($12). 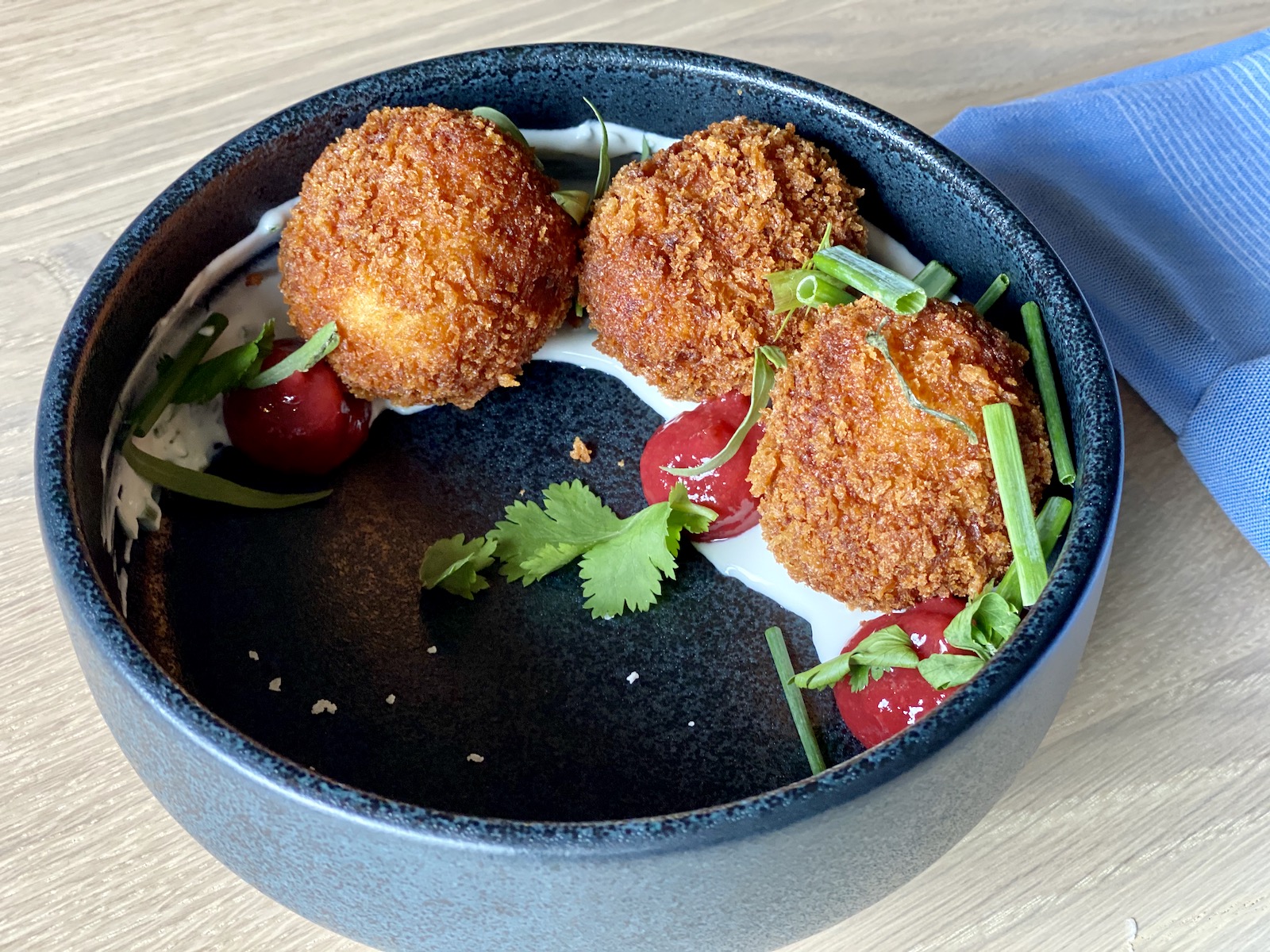 Like the salmon trio, which highlights both hot and cold smoking processes, the bulk of the current raw bar menu is also a reflection of the notions of fire and ice.

For example, oysters are served on the half-shell with beet mignonette, smoked cocktail sauce and horseradish ($18). But you can also enjoy them glazed in a combination of miso and whipped creme fraiche with coriander and lime ($12).

Eldr+Rime is among a small number of restaurants in the Midwest that source from The Crab Broker in Dutch Harbor Alaska where freshly caught crab is cooked, chilled and brine-frozen without the secondary processing that so often creates salty or "off" flavors.

At Eldr+Rime, you can enjoy it chilled with garlic butter and mustard sauce ($80), a preparation that Baca says he can’t recommend more highly.

"We cut the top shell so that it’s super easy to eat," he says. "And I recommend eating it cold because it’s so sweet. It will change your entire perception of king crab." 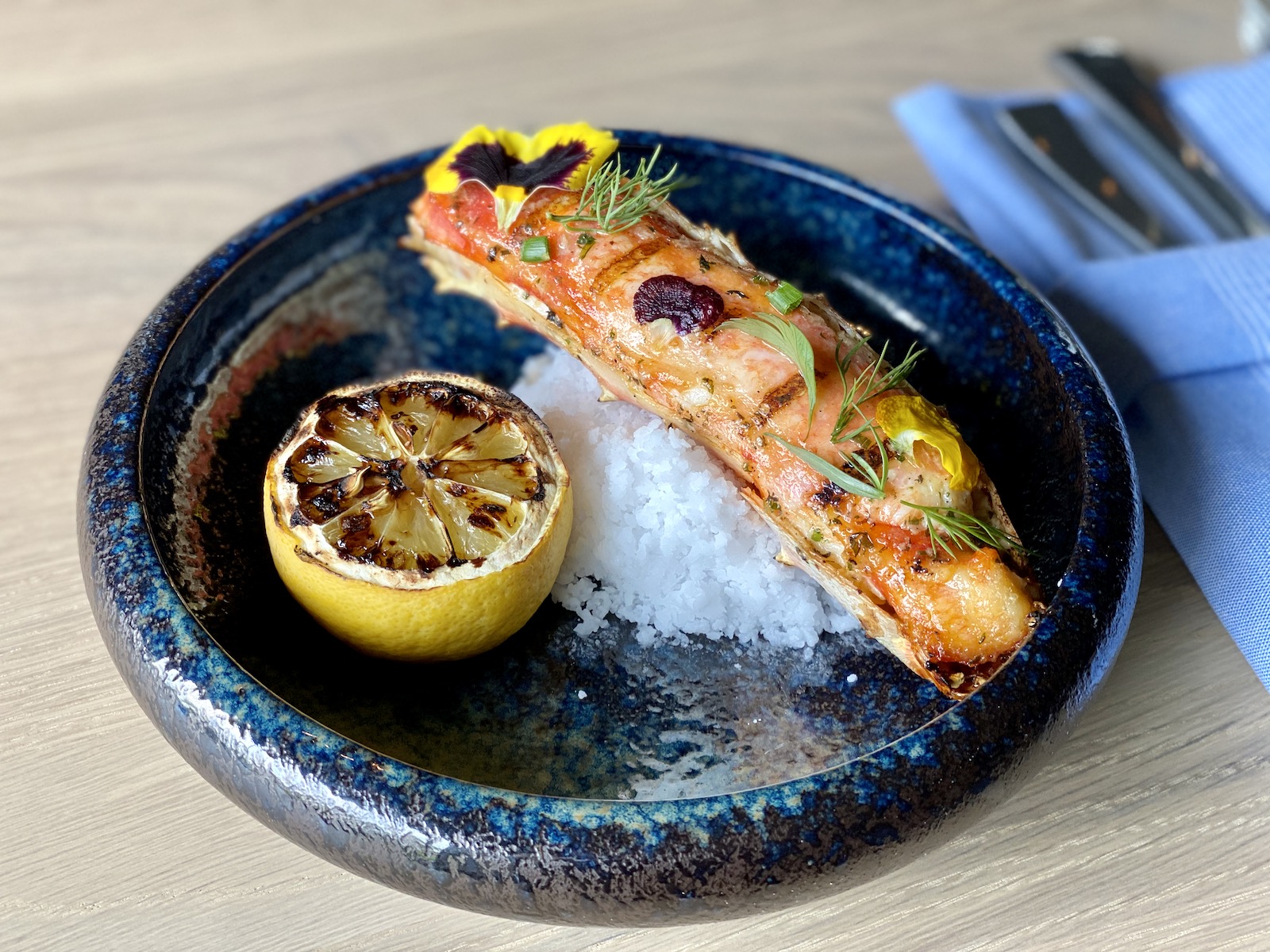 But, guests can also enjoy the equally delicious merus (the largest portion of the crab leg), basted in butter, coal-roasted and served with charred lemon (pictured above, $25).

Entrees on the Eldr+Rime menu also straddle the worlds of American and Scandinavian cuisine through wood-fired cooking along with the integration of herbs, preserved items, pickles and locally sourced produce.

For example, the Filet Mignon Oskar is a classic American steakhouse dish with a Nordic twist that reflects its Swedish roots.

"As the story goes," says Baca, "Veal Oscar was originally created for King Oscar II of Sweden. And our dish is true to the components, but we’ve deconstructed them a bit."

Here the 8-ounce filet is cooked on the wood-fired grill, topped with king crab and accompanied by white asparagus brined in aigre doux infused with orange zest and tarragon. The wine-based marinade is then reduced with butter to form the sauce. The egg, which would normally be incorporated into a hollandaise or béarnaise, is instead integrated with a shaving of cured egg yolk over the top ($44).

Other entrees include Faroe Island salmon served with corn chow chow, pea shoots and preserved tomato vinaigrette ($26) along with a grilled half chicken is seasoned with wild Arctic thyme sea salt and served with BBQ parsnips and smoked chicken jus ($24).

And for those who just want some well-prepared, no-frills comfort, there's even a wood-fired burger made with Wisconsin grass-fed beef, topped with butterkase and smoked onion jam and served with hand-cut frites ($16). 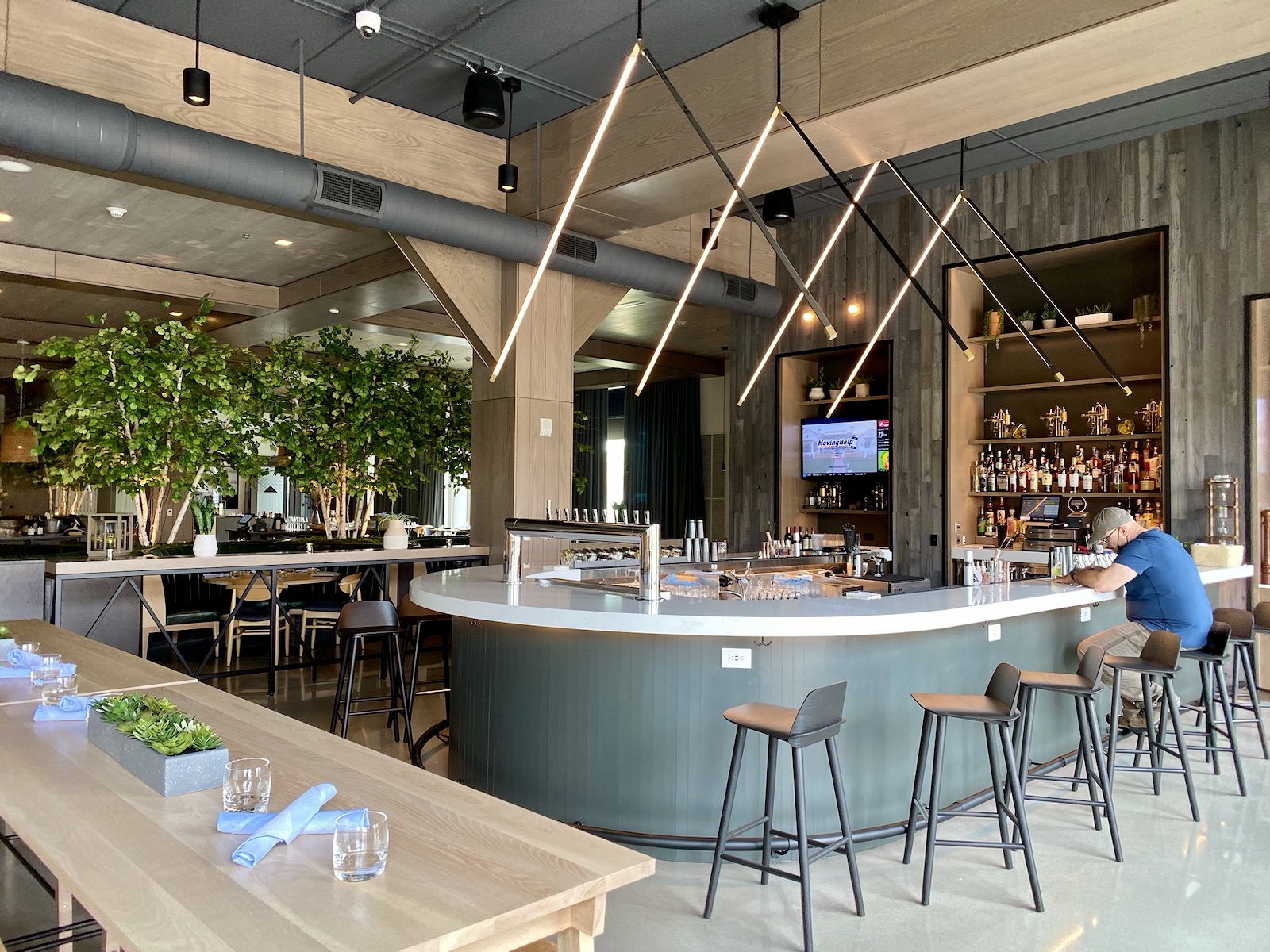 Craft cocktails include selections like the Thyme for the Bramble with thyme-infused Hendrick’s gin, creme de mure, lemon, simple syrup and blackberries ($14). 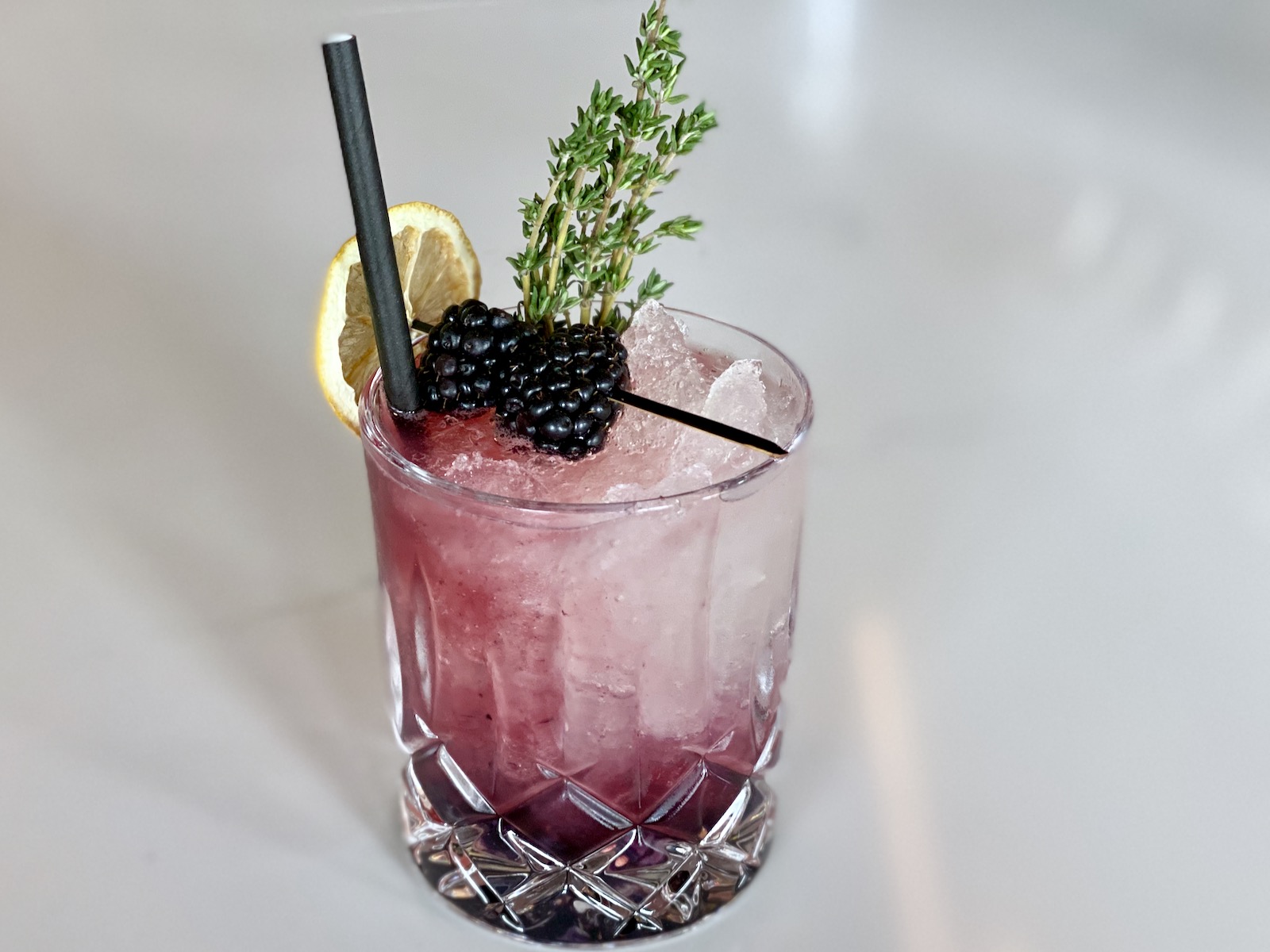 "Our goal was really to find hidden gems and spark curiosity from guests with selections they might not find elsewhere," says Mick Laughran, Director of Beverage & Food Outlets, who points to selections like Moussé's NV Brut Blanc de Noirs L'Or d'Eugène, a champagne made from a satiny blend of Pinot Meunier and Pinot Noir which is made with a blending process similar to sherry; and the Sonoma County Camp Cabernet Sauvignon, which is produced without the use of commercial fermentation aids or additives.

The happiest hour of the day might just be one devoid of the stresses we carry with us. And that’s expressly the goal of Hygge Time, a celebration of the present moment held at the bar Tuesday through Friday from 4 to 6 p.m. 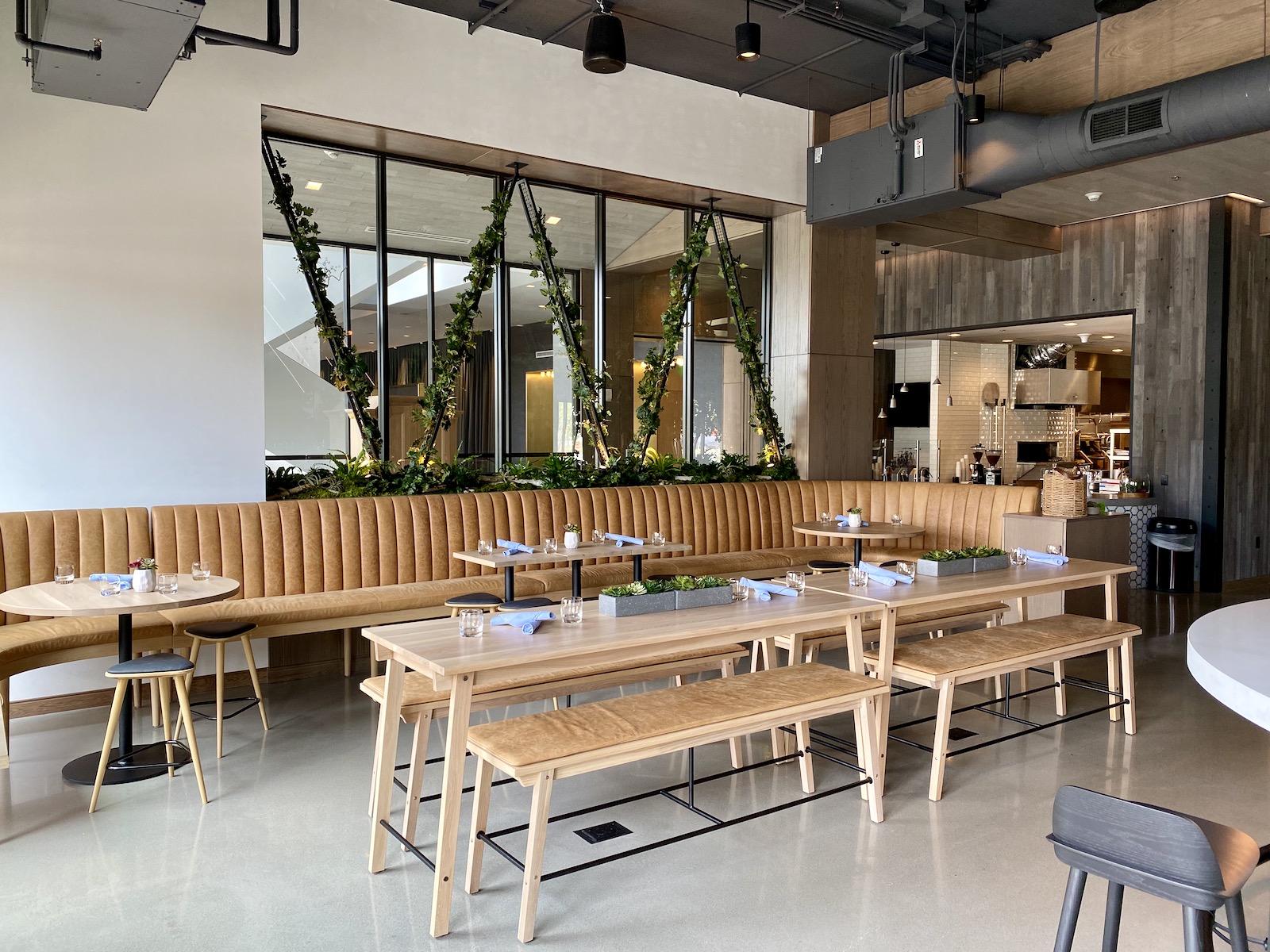 Of course, you might also want to treat yourself to a bar-only special: the King Crab Dog, featuring a potato bun topped with King crab leg, Meyer lemon butter and tarragon mayo ($26). It might just rank among the most delicious moments in  your week.

Eldr+Rime is open for dinner service Monday through Thursday from 5 to 9 p.m. and Friday and Saturday from 5 to 10 p.m.