Mandel's Echelon rising around the Eschweilers at the County Grounds

In 2012, I toured the surviving Alexander Eschweiler-designed Agricultural College buildings on the County Grounds, when their roofs gaped open to the stars - and the elements - and weeds encircled their exteriors. Despite talk of tearing them down, and an ongoing battle to save them from demolition, four of the buildings survive, even as six new apartment buildings are rising around them.

In 2012, I toured the surviving Alexander Eschweiler-designed Agricultural College buildings on the County Grounds, when their roofs gaped open to the stars – and the elements – and weeds encircled their exteriors.

Despite talk of tearing them down, and an ongoing battle to save them from demolition, four of the buildings survive, even as six new apartment buildings are rising around them. 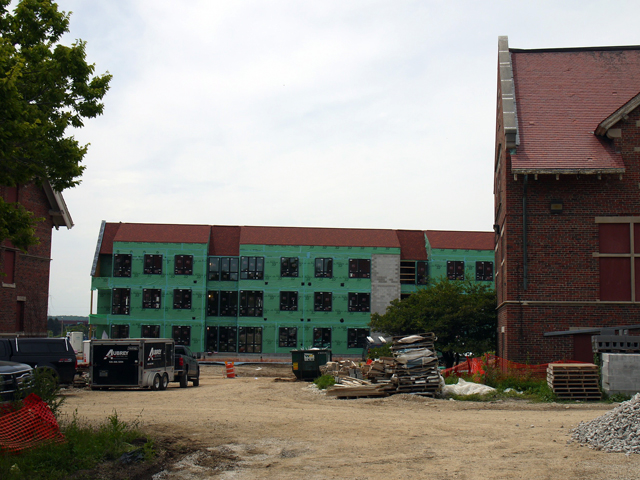 The Mandel Group is forging ahead with its plan to create 188 upscale apartments in those six new buildings, designed by HGA, and a commons development in the former administration building, which is by far the best preserved and most architecturally interesting on the inside, with its gorgeous top-floor gym/hall.

You can read more about the history of the buildings and see "before" photos from all of them here. 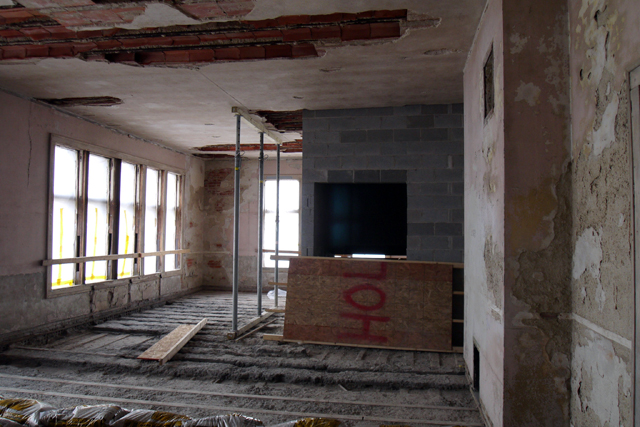 The only one that has fallen since my last visit is the old power plant, which wasn’t projected to have much of a future back then. According to Megan Felten, the property manager at Echelon at Innovation Campus – which is what the new development is called – three of the buildings have been basically untouched since my previous visit.

But work on the administration building – which will house a leasing office and fitness center for Echelon, as well as community offices and spaces on the second floor, as well as a rentable banquet space up in the hall – is under way.

The entrances to the tunnels that once connected all the buildings to the power plant have been walled up with cinder block, which has also been used to create an elevator shaft near the northeast corner of the building. 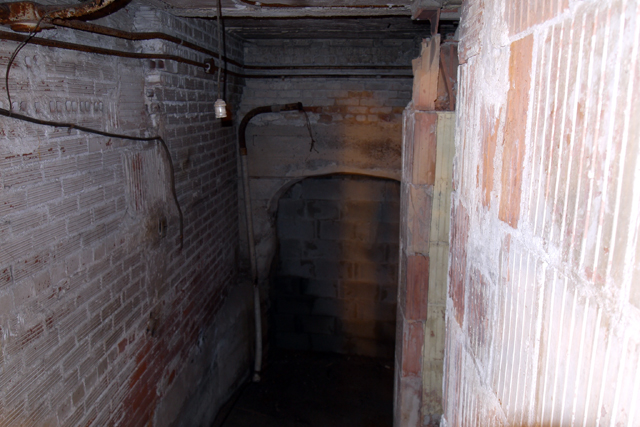 Holes in the roof and walls have been patched and the battle to keep the graffiti artists out is a never-ending one, says Felten.

In a former science lab, work benches fitted with bunson burners have been pulled apart and the remnants are stacked in the center of the room, along with now-redundant radiators (the new heating system won’t run on steam), beneath a white tarp. 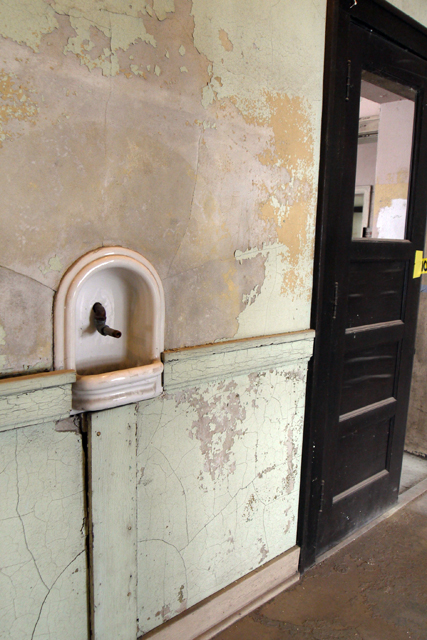 Many old details still remain, but Felten wasn’t sure which would stay and which would go. For example, while there’s a great old bubbler nested into the wall on the first floor, similar ones in other areas have been removed.

But the original, and extremely solid, staircases, and the pointed gothic arches around the entrance alcoves on the first floor will remain, as will the arches in the third floor hall, which always remind me of the lower portions of the scissor arches in England's Wells Cathedral. 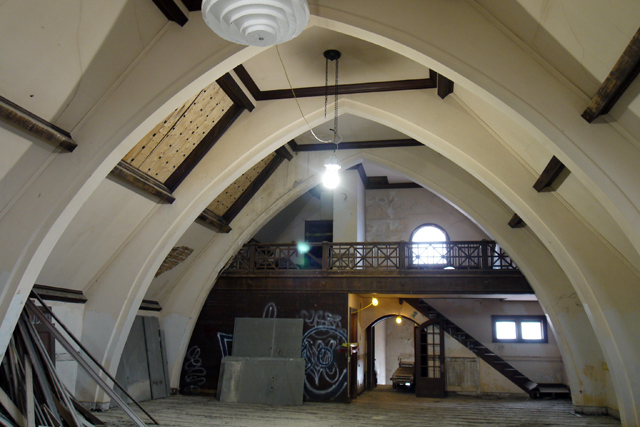 Up in the hall, plywood covers the old skylight openings, but Felten says new skylights will be installed. In the northeast corner, a caterer’s kitchen is planned and a former office space in the northwest corner will be converted to rest rooms.

A portion of the woodwork in the hall has been cleaned and restored to a rich luster, creating a teasing glimpse of how the finished product will appear.

On the day I visited, all six new buildings were framed and in progress, many with windows already installed. Crews were working to fill and pave some of the streets in the complex, so the first tenants will be able to access their buildings by the time they can begin to move in come September. 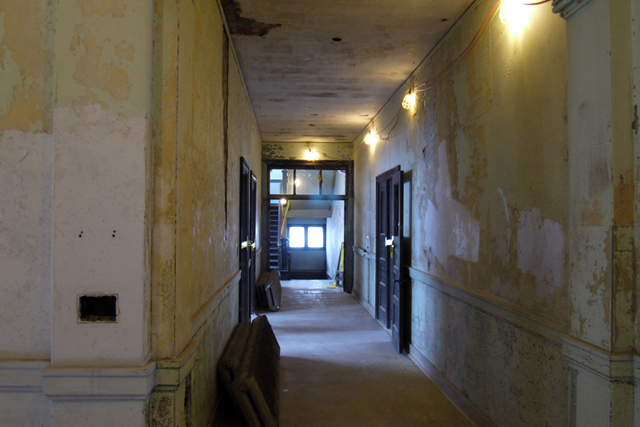 Two of the buildings – as well as portions of the administration building – are slated to be ready for occupancy by then, says Felten, with the other four (and the remainder of the admin building) coming online from October to January.

A pool and landscaping are expected to be ready by next summer. The quad, shown as a grassy patch in the site map, will actually be planted as a prairie. The grassland to the east of the site will remain untouched as it is a protected monarch butterfly habit. 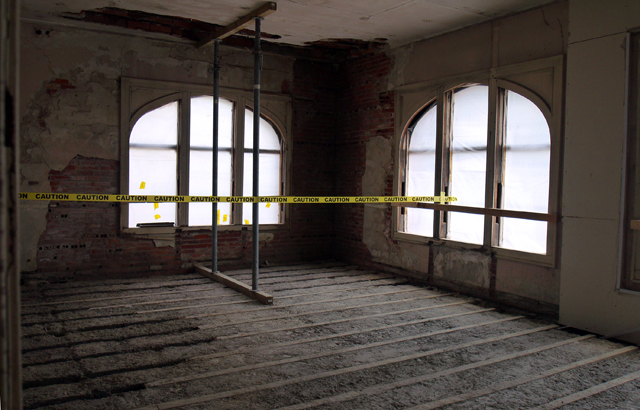 A dog run to the southwest is also planned. Pets are allowed in the complex.

At the entrance to the site is an ABB office building and just down the road a piece is the UW-Milwaukee Innovation Campus.

"It’s amazing," says Felten, "I just got my trailer here (on the site) and there has been a lot of interest already. I’ve been doing a lot of tours."

Prospective tenants can expect to pay between roughly $1,200 to $2,000 a month for apartments that range from 562-square foot studios to 1,179-square foot two-bedroom units at Echelon. 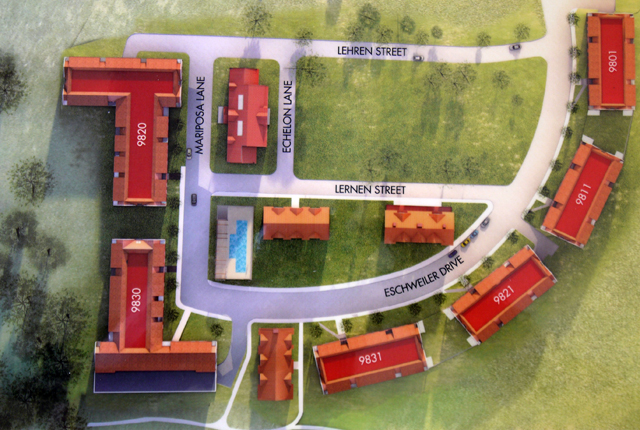 The future remains unclear for the dairy, dormitory and engineering buildings. An earlier proposal had Mandel gutting two of those buildings, leaving only portions of the exterior walls standing to create walled ruin gardens that recall the haunting sites of ruined cathedrals in England. 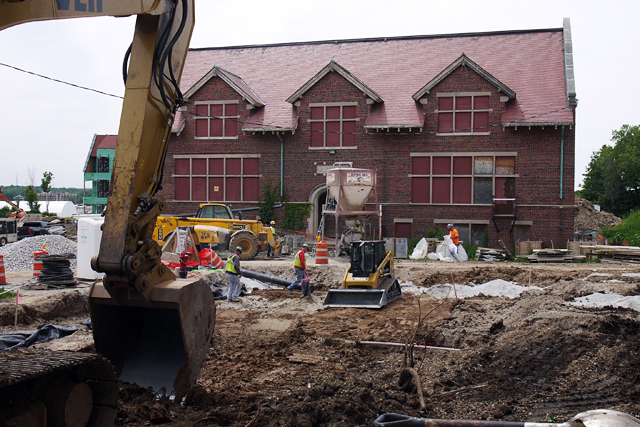 But now, says Felten, Mandel Group is putting out feelers and seeking ideas for the lovely red brick collegiate gothic structures. One such idea – and it’s only an idea right now – is to create a cafe space for a local coffee purveyor.

"It’s happening so quickly," says Felten. "Yesterday they were putting in sewers here (in the road in front of the administration building) and now it’s already filled in with stones. It’s very exciting."