Eddie Lacy has not had the type of start to 2014 that he would have liked, with only one, 100-yard effort to his name thus far. But, he hopes that the change he made two weeks ago in Minnesota carries over the rest of the way.

The Vikings defender met the Green Bay Packers running back ahead of the end zone two weeks ago on a rainy Lambeau Field, and for his obstinacy, Lacy rewarded him with a strike that sent his helmet flying out of bounds.

"You see Eddie Lacy run that guy over and knock his helmet off for a touchdown, that gets everybody going," said Packers defensive end Mike Daniels, no stranger to intensity, or angry business decisions. "That’s good, good, solid, tough football." 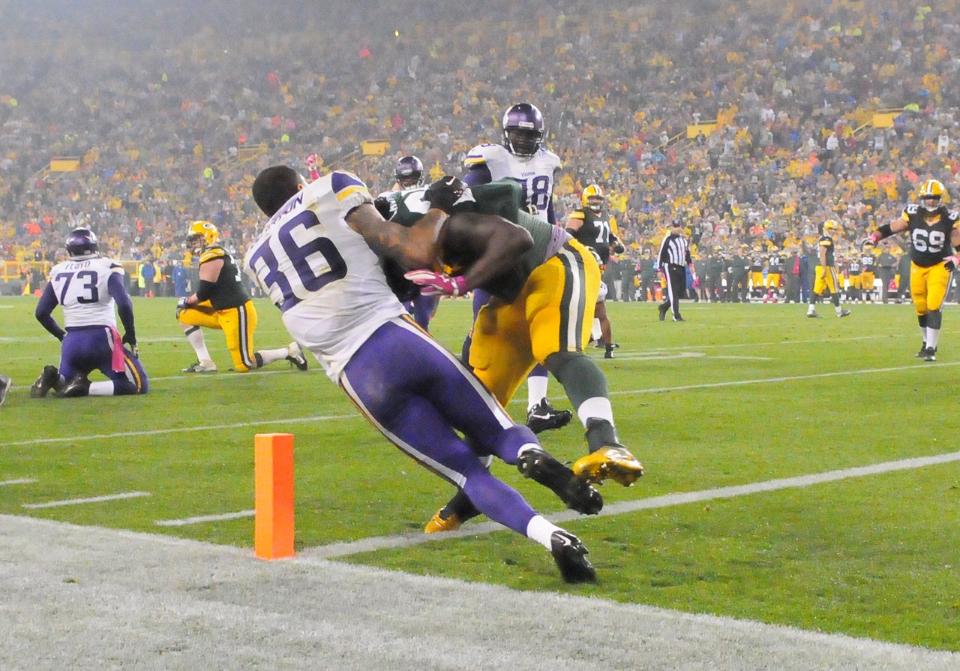 It was the signature to Lacy’s greatest work thus far in the 2014 NFL season, a 105-yard, two-touchdown performance.

In the previous four weeks combined, the second-year running back had rushed for just 161 yards and one touchdown.

The totals aside, Lacy knew there was one major difference between his play that Thursday night in Green Bay the previous weeks:

"When I made my decision, I made it, and I just got my pad level down and I just drove in and made whoever had to hit me make it a tough hit on their behalf, instead of slowing down and hitting the air brakes."

Another major difference between that Vikings game and the previous four were the size holes the offensive line created for him. It’s much easier to be decisive when lanes commuters on I-94 would be jealous of open up before you.

"The whole run game thing, it’s a collective effort," guard Josh Sitton said. "We blocked better up front, finished blocks better, and the backs were patient yet, when they saw something, they hit it. We all just played better."

Unfortunately for the Packers, that momentum couldn’t carry over to Sunday in a 24-23 victory over the Miami Dolphins. Miami came in as the seventh-ranked defensive unit in the league, and Lacy once again found the going tough. He rushed 14 times for just 40 yards, making it the fifth time in six weeks that he failed to crack even 50 yards on the ground.

To show you how tough the going has been outside of that Minnesota game, Lacy is averaging 13.4 carries per game for just 40.2 yards and an even 3.0 yards per pop.

The Vikings game inflates those numbers to 51-13.3-3.8. Compare that to his Pro Bowl season from a year ago, when he averaged nearly 19 carries per game for 78.5 yards and 4.1 yards per rush.

Much is different in 2014, however. Four of the Packers’ first six opponents came into their game with a defense ranked eighth in the league or better. Aaron Rodgers missed essentially eight full games last year in which Lacy averaged 18.8 carries and 83.3 yards per contest.

On the blocking side, there is a new right tackle (Bryan Bulaga) and center (Corey Linsley) in the mix this year, along with new tight ends and rookie receivers.

For their part, the offensive linemen felt that they weren’t finishing off their blocks through the first few weeks of the season, and that getting Lacy started from behind Linsley – as opposed to off Rodgers’ shoulder in the shotgun – was a beneficial change.

Also, Lacy has gained the respect of opposing defensive coordinators. He’s as much of the game plan as Rodgers is, if not more so – it’s easier to take away one man than to cover four.

"Whenever you’re able to be balanced, that’s always what an offense wants," Packers receiver Jordy Nelson said. "(The run game) allowed us to be that way and be successful."
Perhaps it’s no coincidence then that in the five games Lacy has struggled Rodgers has posted quarterback ratings below 100 three times.

All of these factors play into why Lacy has not produced the type of number he did in his rookie campaign, but the one factor he can control – his own style – seems to have been corrected. Lacy isn’t sure why he stopped being so decisive in running lanes, though he says it has nothing to do with the fact he has suffered two concussions in the past two years.

But, going forward Lacy hopes to see more Vikings-like success because he’s made the decision to be, well, more decisive.