Elvis Costello and The Imposters' tour is called "Just Trust," which might feel like a reference to Costello's acclaimed and accomplished 1981 "Trust" LP, but the band's energetic tour-ending show in Milwaukee on Tuesday night transported this writer back in time to a couple years after that.

Elvis Costello and The Imposters’ tour is called "Just Trust," which might feel like a reference to Costello’s acclaimed and accomplished 1981 "Trust" LP, but the band’s energetic show at the Miller High Life Theatre on Tuesday night transported this writer back in time to a couple years after that.

In the summer of 1983, Costello and his then-band, The Attractions – which has the same lineup as The Imposters, with only a different bassist and the addition of two singers – were on tour for their record "Punch the Clock," and performed in this very same space, which was then called the Milwaukee Auditorium.

Last night of #justtrustusa2019 in Milwaukee. Thanks to the happy few who attended. I think we have a slice of cake for each and every one of you. Thanks also go to Robbie, Toast and all our crew, drivers and hosts. Until the next time. E.C. & The Imposters, Kitten and Briana pic.twitter.com/RTPE5VgCX2 — Elvis Costello (@ElvisCostello) November 27, 2019

It was the first major concert I saw after I moved to Milwaukee a couple months before. In fact, upon arriving, I found my ticket waiting for me, courtesy of my mom, and it was comforting to hear a familiar voice and see – if across a wide gulf of seats – a familiar face.

The current tour, which opened Oct. 23 in Charlottesville, Virginia, came to a close here in Milwaukee last night, and, while the word "Trust" is part of the tour’s name, it should not imply a focus on that great record.

This despite the potentially misleading fact early on in the show that the first two tunes Tuesday night – "In Strict Time" and "Clubland" – appear on that LP. Costello and company only revisited "Trust" a couple more times across a show that ran more than two hours. 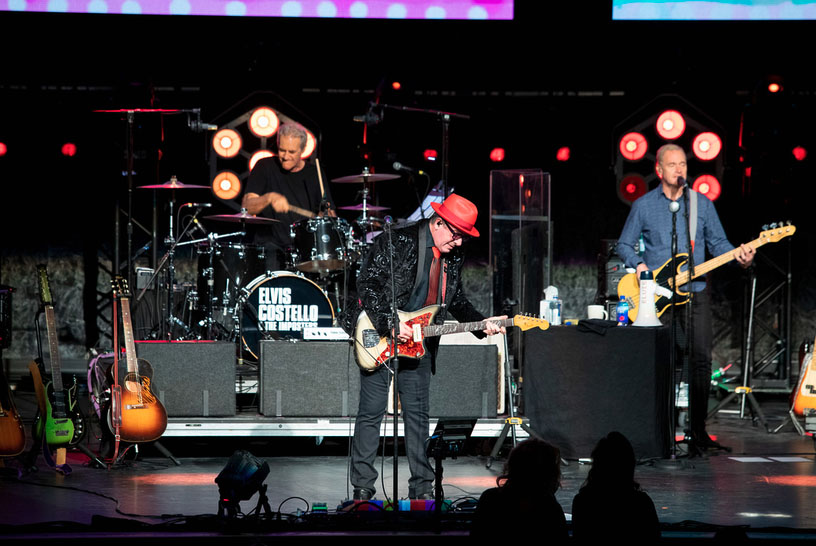 Before the tour kicked off, a press release clarified the name of the jaunt: "The tour is entitled, ‘Just Trust’ in answer to the musical questions: ‘Will they play my favorite song?,’ or, ‘Are they going to frighten the horses with a lot of excellent songs that are rarely performed?,’ not to mention, ‘Can I expect the hits of yesteryear and those of tomorrow?’ To which we say: Just Trust Elvis Costello and The Imposters."

Costello – who was recently bestowed the title of Officer of the Order of the British Empire in recognition of his "services to music" – further added at Tuesday’s show, "These songs we're playing tonight are just the songs I want to hear."

And those songs offered dips into most eras of his long career. Costello’s most recent record, "Look Now," released last year, is his 30th studio set, so there’s a lot from which to choose. 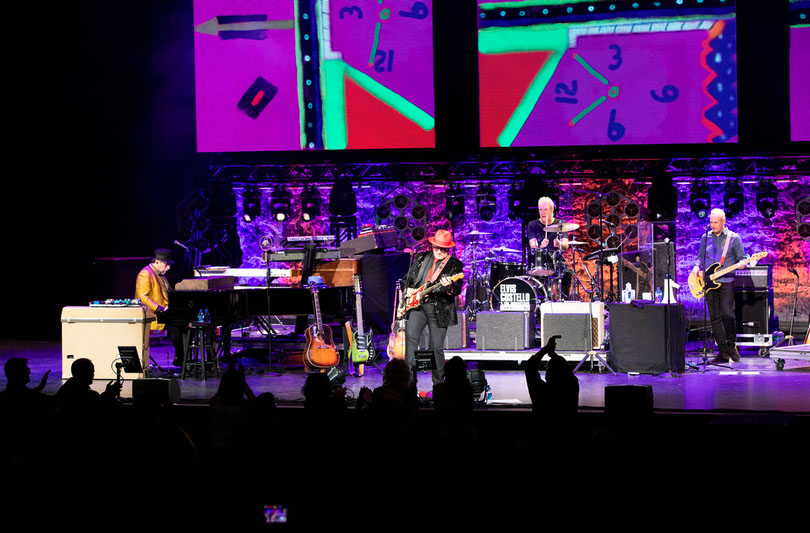 He tapped "Mystery Dance" and "Alison" from his debut, "My Aim Is True," while "Lip Service," "Pump It Up" and Little Triggers" represented the follow-up, "This Year’s Model." "Accidents Will Happen" and "Green Shirt" came from his third record, "Armed Forces," and he pulled "High Fidelity" from the next one, "Get Happy!!"

Some of those 30 records went completely unrepresented, as you might expect, but he did pluck a gem each from his late ‘80s trio of masterworks, "King of America," "Blood and Chocolate" and "Spike."

Costello slipped in some unexpected covers, too, including Larry Williams’ "Slow Down" and "Be Real," by the Sir Douglas Quintet.

Interestingly, Costello – ever moving forward on an astonishingly wide-ranging array of projects (think collaborations with the The Brodsky Quartet, Burt Bacharach and Allen Toussaint, for starters) – didn’t play much recent material – just one track from "Look Now," and a pair of tunes from an upcoming musical he’s working on called "A Face in the Crowd."

Honestly, that sat just fine with a crowd on hand that appeared, like me, to have been along for the ride for a very long time. That voice that was already comforting to me by 1983 has been, along with Paul Weller’s, part of the soundtrack of nearly my entire life by now. I’d venture to guess the same is true for many of the folks around me at Tuesday’s show.

Donning a sparkling black jacket, black shirt and pants, and bright red hat and tie, Costello played with fire, as did his longtime band, with drummer Pete Thomas chipping in his usual fiery dynamics and keyboardist Steve Nieve at times literally running between a grand piano and his other keyboards. 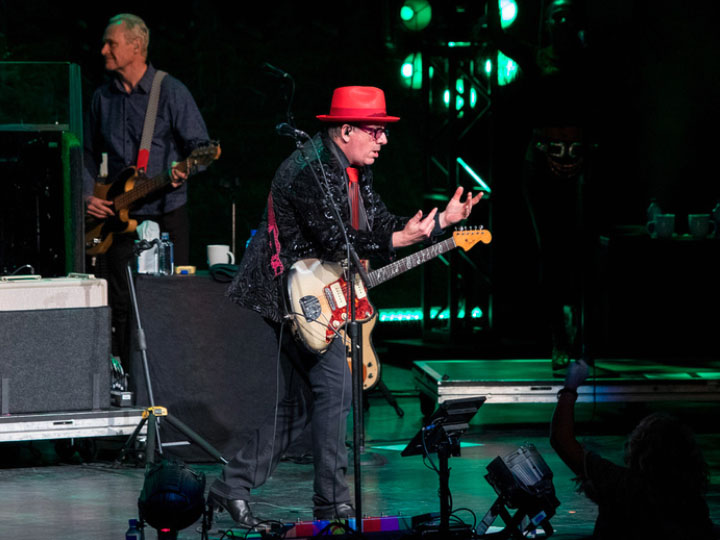 If Costello's voice strayed a bit once in a while, remember that this Milwaukee show was the last of about two dozen in a row, which can take a toll.

While Scotland’s poppy Aztec Camera opened the 1983 show – with a set cut short by technical problems – there was no opening act at Tuesday’s performance.

Instead we saw pre-show projections on a backdrop that included a copy of an ad for Costello’s 1977 Milwaukee debut at the Electric Ballroom (at the State Theater) almost 42 years ago to the day.

"It was Thanksgiving then, too," he said to a crowd that likely couldn’t have asked for a better holiday week gift.

Encore:
From A Whisper to A Scream
Everyday I Write the Book
Pump It Up
(What’s So Funny 'Bout) Peace, Love & Understanding
Slow Down
Alison