If, like me, your trips to the hardware store are extremely focused as you attempt to cut down the number of trips you'll need to make for even the simplest project, you might not notice the firehouse that forms part of Downtown's National Ace Hardware, 1303 N. 4th St., despite the fact that its Romanesque facade is painted red.

If, like me, your trips to the hardware store are extremely focused as you attempt to cut down the number of trips you'll need to make for even the simplest project, you might not notice the firehouse that forms part of Downtown's National Ace Hardware, 1303 N. 4th St., despite the fact that its Romanesque facade is painted red.

The three-story, two-bay fire station designed by fireman turned architect Sebastian Brand, was the second home for Engine Co. 2, which was organized Nov. 6, 1862 and first took up residence in the the former volunteer fire house no. 3 at 422 3rd St.

Despite having been rebuilt in 1873, Engine Co. 2 needed a new home, apparently because as fires started to become more frequent (annual fire alarms doubled from 1873 to 1882) more and larger equipment was required. Company 2's three-man 600-foot hose cart was replaced with equipment carrying twice as much hose in 1885.

So, MFD spent $21,760 constructing this station in 1892, which originally had a 55-foot tower set atop the middle of the facade. 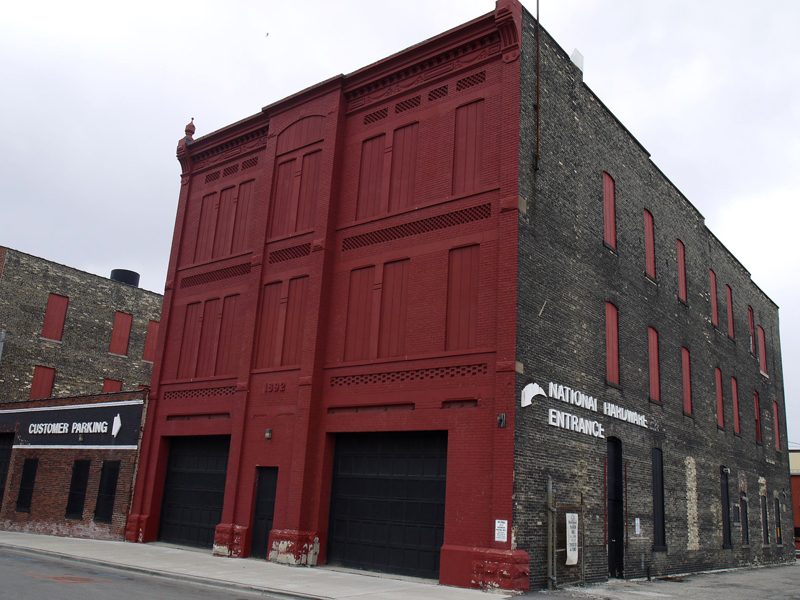 Enter through the hardware store two doors south and you can wend your back into the firehouse, through what one employee told me was the former stable – a single-story skylit building connecting the station to the three-story brick building erected around 1910 for Chas. H. Stehling Co., which manufactured machinery for tanneries.

In the old space, you'll spy some gilt capitals atop the posts supporting the center beam. 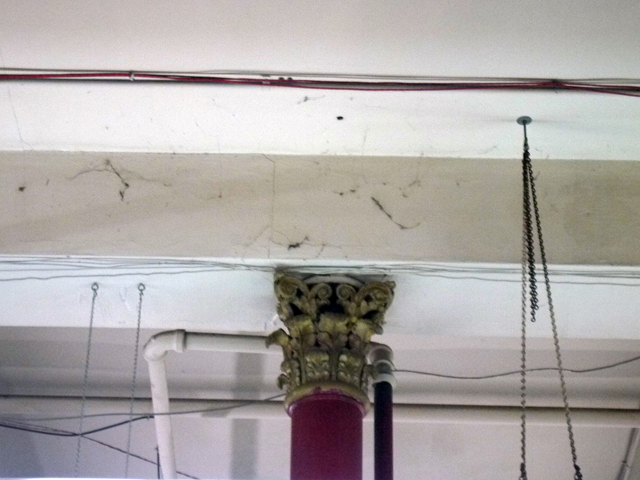 There are also a couple of these round holes in the ceiling. These are also evident at the old firehouse on Bartlett Avenue. I had assumed these were to accommodate fire poles (though they seem a tad small for that), which is possible. Others have averred that they were to drop hay from second-floor lofts to the horses below. Which also seems possible. 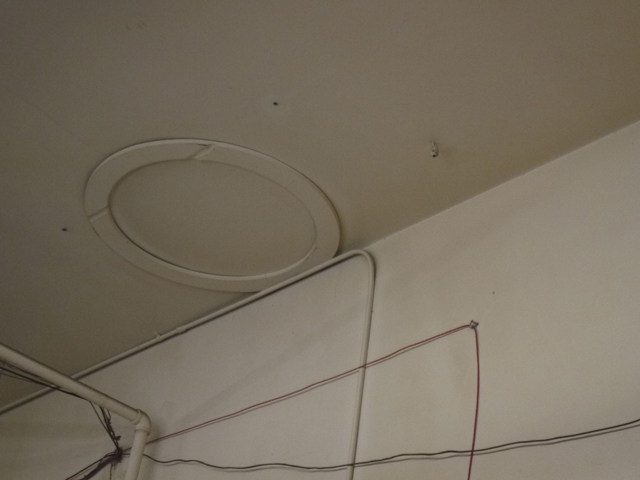 The National employee I spoke with said that he and his colleagues believe a first-floor space in the corner was a kitchen, because of its floor drain and terrazzo floor and wainscoting. However, it could also have been a shower space. 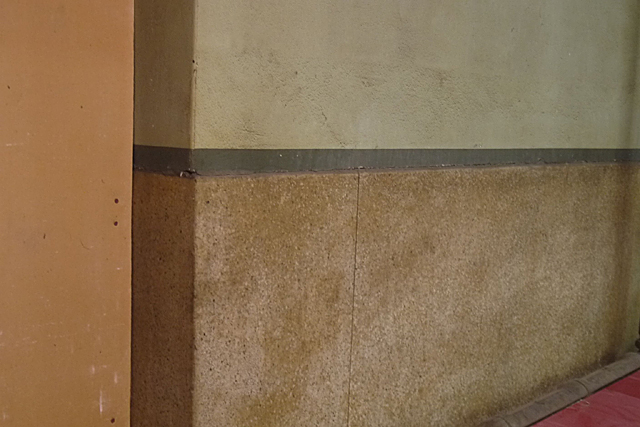 While that employee suggested this low building was the stable, the 1894 Sanborn map shows a stable added to the northwest corner of the firehouse itself and a smaller building just south of the fire station which housed a broom factory. 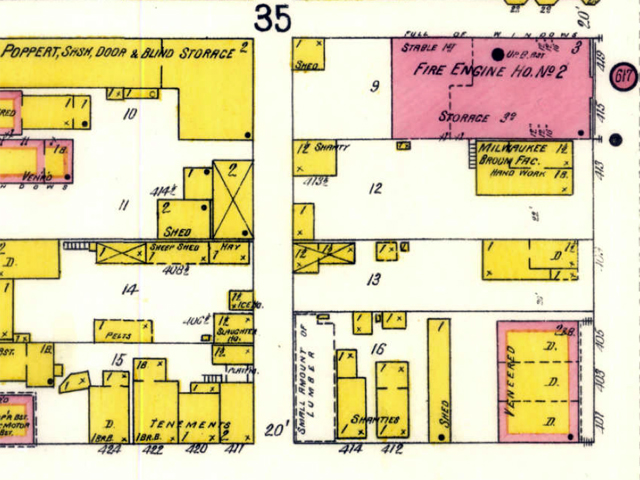 This low space was mapped by 1910 but was described as "general storage." 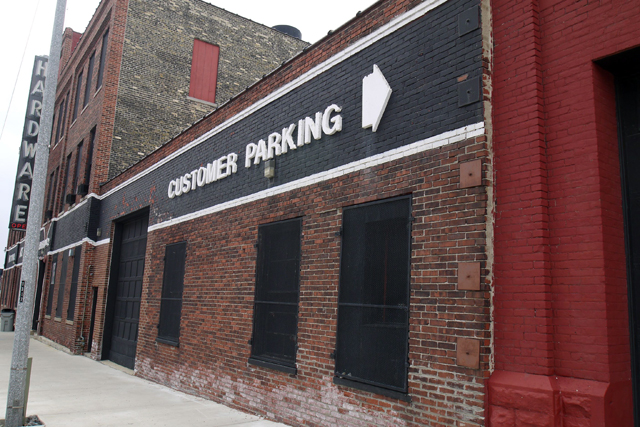 Whether or not this was, in fact, the fire house stables, the framing inside is interesting. 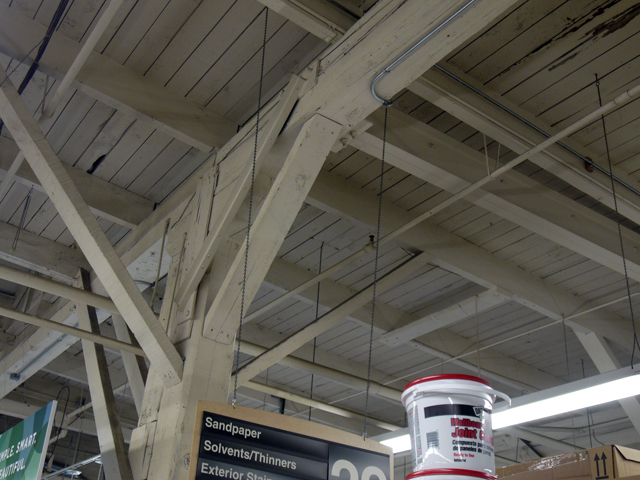 In 1910, Engine Co. 2 was staffed by 25 men and 12 horses, who teamed up to transport and operate a hose wagon, a hook and ladder truck, and a fireboat. These days, National Ace Hardware uses the top floors for storage, while the first floor is part of the retail store. 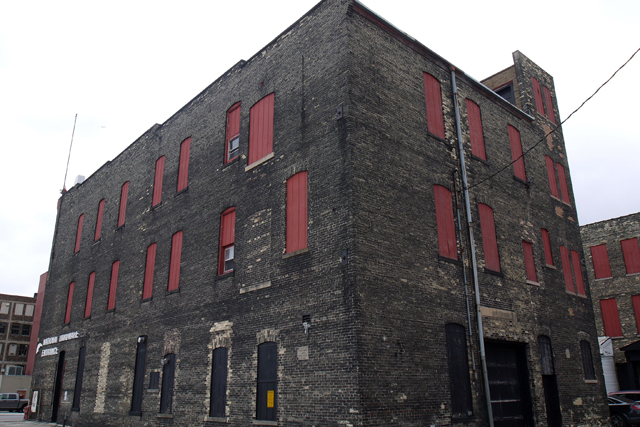 When Engine Co. 1's quarters underwent a major renovation in 1934, its crew and equipment shared space here on 4th Street. However, a modern steel-frame home was erected at 755 N. James Lovell St. and Engine Co. 2 left its Romanesque digs for that station, still in use today, in 1961.

At some point, presumably after the move, Schlitz Brewery utilized the 5,000-square foot building as a garage. It has served as warehouse space ever since.