Milwaukee artist Tula Erskine said she'd painted a 12-foot mural of Joan of Arc for a Washington High School hallway, but no such work hangs there. Research has led to the rediscovery of the work.

We've written about Milwaukee artist Tula Erskine (nee Gertrude Kundmann) before, and I'm always interested to hear more about her work, especially the paintings and other works she created for Milwaukee Public Schools buildings.

As you can see from the resume below, written in her own hand, Erskine did a fair bit of work to help brighten the days of Milwaukee schoolchildren.

"The artist Gertrude 'Tula' Kundmann Erskine was born in 1907 and grew up at 2901 W. North Ave.," writes Nancy Aten, a landscape architect who is working on cataloguing works that Erskine donated to the Urban Ecology Center. 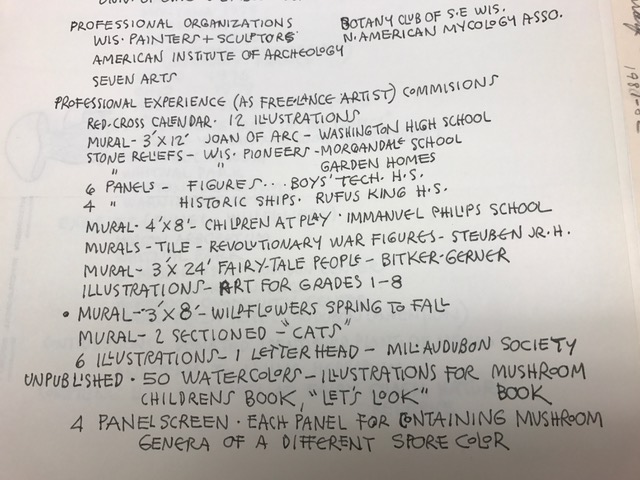 Erskine's resume, written in her own hand. (PHOTO: Chris Young)

"Her father was a baker. She attended Washington High – studied with art teacher Rebecca Chase. She got a degree in art education from Milwaukee State Teachers College and went on to teach art at Rufus King."

You'll notice that in the resume pictured above, Erskine noted that she painted a 3x12-foot mural of Joan of Arc for her high school. Aten says that in 1935, Erskine referred to these "hall murals at Washington High," too, in addition to "tile murals at Steuben, tile murals at Boys Tech, and fireplace mural at Imanuel (sic) Philipp."

Well, Tech has since been replaced, but the decoration survives at the currently closed Philipp and at Steuben Junior High, which is home to Milwaukee French Immersion School.

But what of the Joan of Arc mural, which does not hang in any hallway at Washington High these days?

Aten contacted Washington's then-principal – since replaced – who connected her with school alumnus and historian Linda Durrenberg. The latter hadn't heard of Erskine but did know of some female students of Chase, the art teacher, and she mentioned she had seen a few paintings by them.

Her research turned up this article from the school newspaper, The Scroll, from the 1920s ... 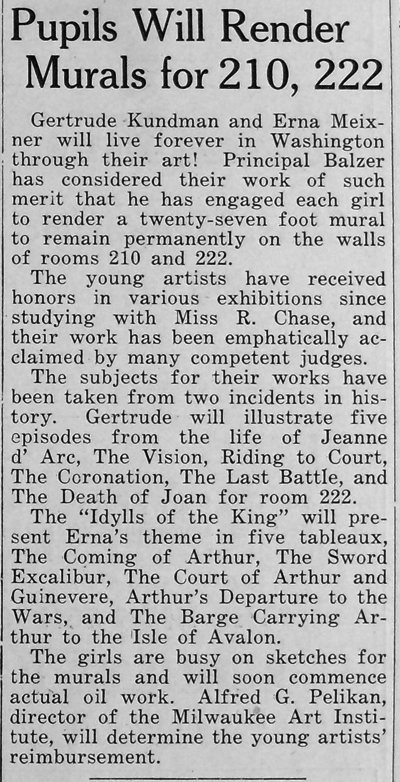 It turns out that Tula's Joan of Arc portion of a 27-foot mural – created along with another student, who would do the other section, featuring King Arthur, in Room 210 – was to adorn Room 222. In its June 8, 1927 edition, The Scroll published Tula's preparatory drawings for the paintings, which provides a good date for the work.

Although Tula  graduated in January, she returned to the school to continue work on the paintings, work that continued into the summer. In fact, it appears that the two women were still painting into the autumn, when Tula was hit by a car that failed to stop when she was walking on 25th Street and North Avenue.

Suffering three broken ribs and "minor bruises" in the early October accident, young Gertrude told The Scroll – with no lack of melodrama – "A great medieval dragon seemed to leap upon me. It kept crushing me, and try as I did, I could not push it from me. Then all was black."

According to Durrenberg, Room 222 is now Room 208, Room 210 is now the main office, and there are no murals in either space.

But, fortunately, Durrenberg kept looking. Three days after writing to Aten to share the article, she wrote back to say that Erskine's Joan of Arc had been located in storage at Washington, as was Erna Meixner's King Arthur. But, the mural was actually a series of paintings that Tula executed – unless she painted them as one long work that was later chopped into smaller segments.

The paintings represented, according to Durrenberg, The Vision, Riding to Court, The Coronation, The Last Battle and The Death of Joan. 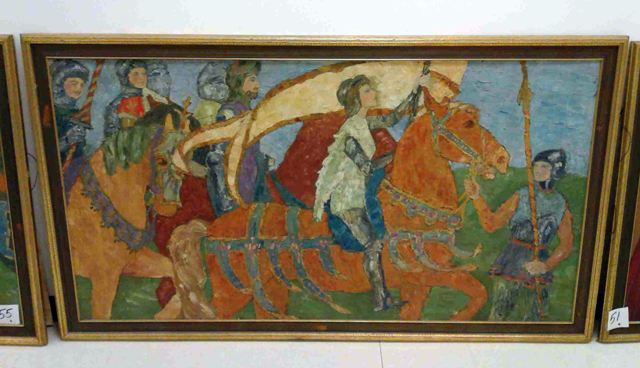 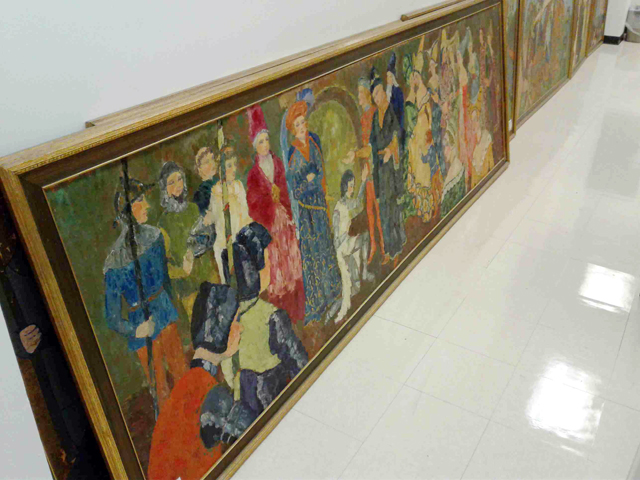 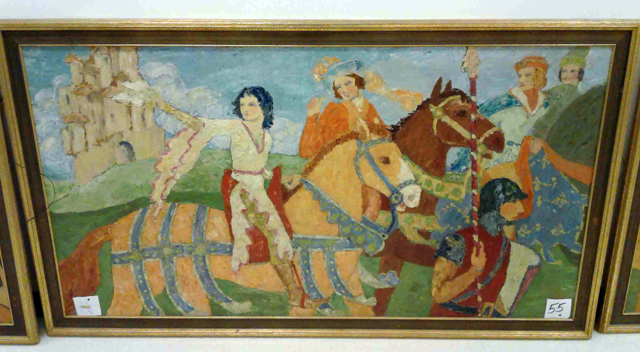 Aten is seeking a professional photographer willing to donate services to photograph the works as part of the volunteer cataloguing work she's doing. If you are qualified and willing to help, please send me an email and I will connect you.

It's unclear at the moment whether or not the paintings will be displayed once again at the school – though Durrenberg says the idea has been floated – but it sure is nice to know that these pieces of Milwaukee art history have survived and could be seen publicly again at some point.

Earlier this year, two Birger Sandzen paintings found in a boiler room at Washington in 2004 were sold at auction, raising $772,000 for student scholarships at the high school. That paintings had been a gift from the class of 1927. There reportedly has not been any discussion about selling these Tula Erskine works.

Meanwhile, Aten – with the help of Chris Young – continues to work on the Erskine items at the UEC.

"Later in life she became an expert in local flora especially mushrooms and they were her focus," Aten says.