When I heard Turner Sports' Ernie Johnson say he grew up on 68th Street in Tosa, it caught my ear, because it's not too far from where I live. Turns out it's even closer than I thought.

When I heard Turner Sports' Ernie Johnson say he grew up on 68th Street in Tosa, it caught my ear, because it's not too far from where I live. Turns out it's even closer than I thought.

This evening on a walk with my kid, we stumbled upon Johnson, along with his high-profile -- and high-altitude -- friends Shaquille O'Neal and Charles Barkley -- enjoying a neighborhood barbecue in front of Johnson's childhood home in the City of Milwaukee's Enderis Park neighborhood.

Johnson and his friends are in town, of course, for the Bucks playoff series, which the team leads, 1-0, over the Toronto Raptors after a come from behind win last night.

Sorry to disappoint Wauwatosa but @TurnerSportsEJ is an Enderis Park native and I have the faces here to prove it. pic.twitter.com/8TwAfkVUvU — Bobby Tanzilo (@BobbyOnMKEcom) May 16, 2019

A small crowd was gathered, eating free pizza and brats and enjoying free soda and beer (Bud Light?!) in front of the house. District Ald. Michael Murphy was on hand with a plaque for Johnson, who was wearing a Bucks hoodie he'd been gifted last night.

The homeowners, Kim and Patrick Nelson, were also on hand, as was a TV news crew, too, which must have gotten early word because I saw a cameraman from the station shooting some B-roll this afternoon in the neighborhood. 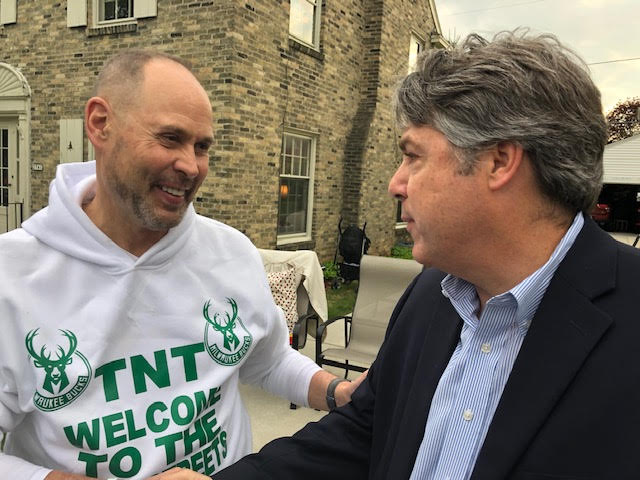 The celebs were posing for selfies (yes, yes, I did), signing autographs, eating heartily and chitchatting with all comers. It was a festive little affair and the stars seemed really down to earth and approachable.

That surely means Bucks in 5.

UPDATES: Former Milwaukee County Historical Society Director Bob Teske, who grew up down the street from Johnson, and his brother Paul both wrote to say that Johnson's dad, who had been a relief pitcher for the Braves (first in Boston and then from 1953 to '58 in Milwaukee; he also pitched for the minor league Milwaukee Brewers), was also their basketball coach at Mother of Good Counsel School, another block north, on 68th and Lisbon Avenue.

"I believe (they) moved into the house in the mid '50s," says Paul Teske. "Ernie, Sr. was around for the '57 and '58 World Series. It was big stuff in the neighborhood when Ernie and family moved in."

Ald. Murphy issued a statement Friday complimenting and thanking the celebs, but not only them.

"The Nelsons were so kind to open their home for Ernie and his guests, and it was especially fun watching a neighbor instruct Charles on the correct way to prepare and grill bratwurst," said Murphy.

"I have been lucky to represent Enderis Park and the 10th District for many years, and yesterday was a special moment for the neighborhood and the city that I’ll never forget."