On Wednesday night, the Travel Channel will air an episode of its series "Expedition Unknown" that was filmed in part in Milwaukee. In the episode, host Josh Gates attempts to unearth the unsolved mystery of Byron Preiss' cult puzzle book "The Secret," published in 1982.

On Wednesday night, the Travel Channel will air an episode of its series "Expedition Unknown" that was partly filmed in Milwaukee in April.

VISIT Milwaukee and the County Parks worked with the show and its host Josh Gates on a segment (there's a video trailer at the link) that attempts to unearth the unsolved mystery of Byron Preiss’ cult puzzle book "The Secret," published in 1982.

Preiss – who died in 2005 – buried a dozen ceramic "casques" (which means "helmets" in French) in parks around the country, each one containing a key that could be redeemed for a jewel. Preiss used fantasy art and poetry as clues to the exact locations of the objects. 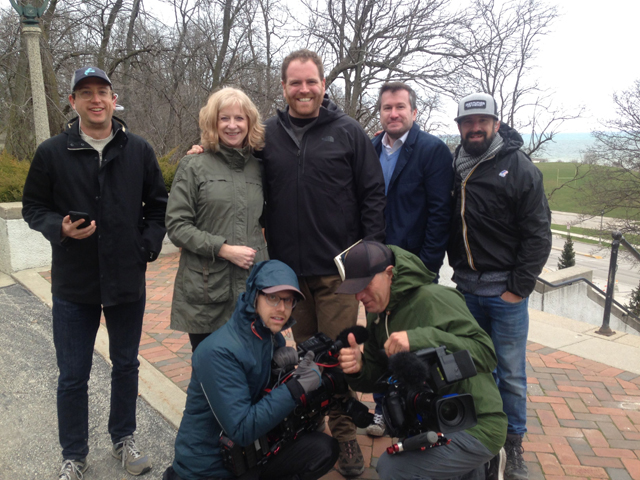 
Casques had already been found in Cleveland and Chicago, and Gates visited Milwaukee, New York and St. Augustine, Florida to try to locate others.

"This was a fun day," says VISIT Milwaukee's Margaret Casey. "The clues indicated a couple of places on the upper East Side to check out – one at UWM and another a reference to street names."

Gates believed the clues suggested the Milwaukee casque sits somewhere in Lake Park, near the pavilion that houses Lake Park Bistro, or near the lions that stand guard on the bridge just east of the North Point Lighthouse.

"We worked with the permission of the local park in Milwaukee," Gates told the Chicago Tribune. "To be honest, I think a lot of their motivation for letting us film was their hope that we could find one of the boxes and kind of stop people from coming to the parks and trying to dig it up."

Find out more about the story and what – if anything (no spoilers here, sorry!) – Gates found in Lake Park (beyond the surprise lunch he enjoyed at the Bistro thanks to the Bartolotta Restaurant Group) when the "Expedition Unknown" episode airs Wednesday at 8 p.m. on the Travel Channel.

To learn more about "The Secret" and the search, check out this podcast by longtime BoDeans sound engineer John Michaels.

Cheers to the return of HBO's "Succession"