On tap for fall: The Explorium Brewpub in Greendale

Southridge Mall will soon have its very own brewpub. The Explorium Brewpub, set to open before the end of 2016, will occupy nearly 6,000 square feet of space in the former home of Ruby Tuesday on the southwest side of the mall next to Buca di Beppo.

There’s another micro-brewery coming to Milwaukee. But this one is settling in at Southridge Mall in Greendale. And despite its potentially unexpected location in the mall, it’s a doozy.

The Explorium Brewpub, which is set to open before the end of 2016, will occupy nearly 6,000 square feet of space in the former home of Ruby Tuesday on the southwest side of the mall, next to Buca di Beppo.

"I would never envision putting my brewpub in Southridge," notes co-owner Mike Doble, who will operate the brewpub with his wife Joan. "But when I got a call from a friend who has a location in the food court and he said there was a great restaurant spot that I should look at, I decided to check it out."

After eyeing up the space, Doble says he was impressed.

"The layout fit what we needed exactly in terms of the kitchen." he says. "And with the addition of an adjacent tenant unit, we’ve been able to design just the sort of dining area we envisioned." 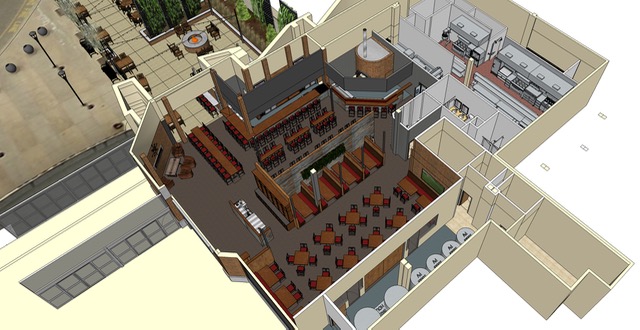 Pair that with a built-in audience and plenty of parking, and Doble says he was sold.

"Maybe it’s not as sexy and cool as an old historic building," he notes. "But it’s practical and it works. And I’m excited about the potential."

Explorium will feature both a full-service restaurant and an onsite brewery, along with a 2,000-square foot patio. And it will, notes Doble, be a place he hopes folks will gather to "explore, taste and discover" the joys of craft beer.

The inside entrance to the brewpub will feature a brand new masonry exterior, while the interior will sport natural materials including brick columns, chalkboards and recycled barn board paneling.

Both the bar and dining area will offer a variety of seating options, including a collection of communal tables, one of which can seat up to 18.

"We really want to create a space where people can really meet other people, talk to one another," says Doble. "Our view is ‘beer is community,’ and if we can create a space to build on that, it’s what we want."

The dining area will offer a view of the brewhouse, which will be equipped with a 10-barrel brewing system that can produce about 800 barrels a year. Access to the brewing area will be available during special events thanks to a sliding wooden barn door that can be opened and closed at will. 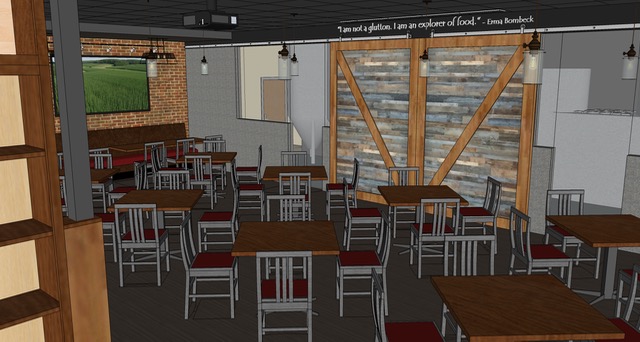 Meanwhile, the patio will feature outdoor seating surrounded by tall trellises supporting trails of hops. An outdoor bar will sport an overhang with infrared heaters and a nearby fire pit, elements which will create an outdoor area that can be used three seasons out of the year. 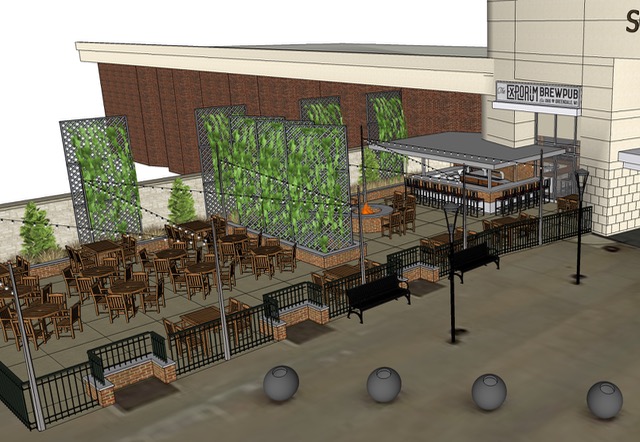 The Explorium menu will feature a variety of appetizers and snacks, including wings, brewhouse pretzels and a charcuterie and cheese board, along with salads, soups and burgers – many of which will be infused with flavor from Explorium brews.

For example, salads will feature dressings made from beer. There will also be a gas-fired pizza oven that will be used to bake a variety of pizzas and calzones, both of which will be made with beer-infused dough. 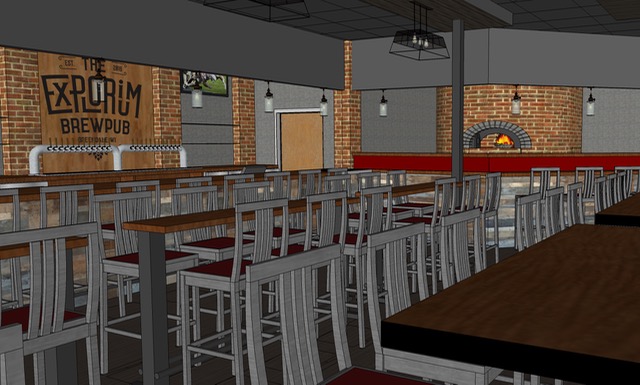 The entire menu, notes Doble, will have an emphasis on supporting local purveyors.
"We’re all about high quality products," he says. "It’s great to get to know the people. Plus, you get a better, more fresh, higher quality product. And we love to support other small businesses like ourselves."

Although Doble is an engineer by trade, he comes by the beer business honestly – both through his love for craft beer and through family ties to the industry. One of his brothers is an owner of Aviator Brewing Co. in North Carolina; meanwhile, his parents and brother David founded Tampa Bay Brewing Company, one of the first of three brewing operations to spring up in Tampa, Florida, which is now home to more than 65 breweries.

Three years ago when his family decided to expand their brewery business by building a new production brewery and restaurant, Doble and his wife, who is originally from Muskego, moved to Tampa to assist with the design of the new spaces.

The project turned out to be an inspiring endeavor. And when he moved back to Wisconsin last October, he brought back eight of David’s recipes for Tampa Bay Brewing Co. brews, as well as his family’s blessing to embark on his own endeavor.

Doble began by devising the Explorium Brewpub brand, a concept that aims to capitalize on the momentum of the Tampa Bay Brewing Company concept while developing its own distinct identity.

A converted barn on his farmstead property in Vernon, in Waukesha County, was built out into a pilot brewery, where Dobe has been developing a series of recipes that will be featured at the brewery, along with eight "legacy beers" – including golden ale, hefeweizen, lager, Scotch ale, IPA and porter – based on his brother David’s recipes. 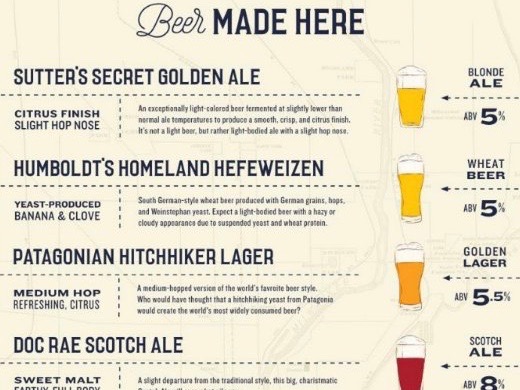 "We’ll also have a number of taps dedicated to beer from other local breweries, both to showcase those breweries as well as to fill out our selection." Doble notes. "We’ll also have tap wines and four taps for nonalcoholic options like craft soda, kombucha and cold brew coffee."

The Dobles hope they can have The Explorium Brewpub up and running before Thanksgiving weekend.