620 WTMJ morning host Gene Mueller often jokes that he has a face made for radio, but apparently somebody somewhere thought he might have a face for late night television, sending in an old photo to Jimmy Fallon and "The Tonight Show" last month.

Milwaukee radio mainstay and current 620 WTMJ morning host Gene Mueller often jokes that he has a face made for radio. But apparently somebody somewhere thought he might have a face for late night television.

Last month, during an episode of "The Tonight Show," host Jimmy Fallon went through his usual segment of quirky viewer-submitted screengrabs – a flood knocking out Noah's Ark Preschool, a Yelp review that leads with "I got stabbed" – before reaching the final photo (at minute 3:40 for those who want to sit through as little of Fallon as possible) submitted by a woman in West Palm Beach, Florida, who thought that somebody in a retro NFL photo looked a little like the former "SNL" star.

What I don't see, however, is a doppelgänger for Jimmy Fallon – at least until, like in all of these segments, Fallon's wardrobe department whips up a replica of the supposed twin's outfit, in this case complete with hair, mustache and barely post-disco duds. And the verdict ... 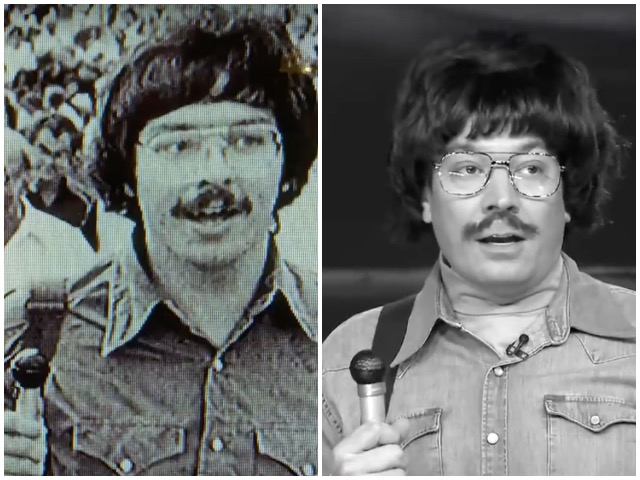 Well, he still doesn't look all that much like Mueller. Maybe I need to borrow Marcol's big specs though. Or maybe I'm just in denial because – full disclosure – Gene Mueller is my father, and I can't decide if a late night show host dressing up like my dad is the coolest thing in the world or the most embarrassing thing in the world. Help me through my complicated emotions in the comments!

Cheers to the return of HBO's "Succession"