The Wisconson-based Knigge family will appear on "Family Feud" on Thursday, May 4. Here's a behind-the-scenes look at the auditioning and taping process of the game show.

Greetings from Family Travel Week, sponsored by The Family Backpack, a new online guide that connects you to the best family travel blog posts. Enjoy seven days of family travel stories that will help you plan your next adventure, reduce pre-vacation stress and provide useful tips for once you arrive at your destination. Wheels up!

In November 2015, Krista Knigge fell asleep while watching the news and when she woke up the next day, couldn’t remember if "Family Feud" was actually coming to Milwaukee to audition families – or if she had dreamt that.

Turns out, it was true, and Knigge started calling her aunt and cousins. She easily formed a team of five to try out for the game show which included Waukesha’s Kelly Steelman, Kelly’s husband Chris, cousin Hannah Steen and their aunt, Becky Gutzman.

Gutzman was later replaced by Knigge’s husband, Corey Geiger, because her aunt couldn’t make the audition due to a blizzard in her northern Wisconsin town.

"Shout-out to Corey for agreeing to be on the show because it was the first day of rifle hunting season," says Kelly.

The auditions took place at the Crowne Plaza near the airport. About 500 people showed up and each family auditioned by playing a mock version of the game with a stand-in talk show host. (Steve Harvey hosts the real television show.)

After their audition, The Knigge family was asked to stay for a second audition. The producers said they were very interested, but they would be in touch. The Knigge family did not hear from them again until July 2016, when they were invited to Atlanta – where the show is taped – for a final audition.

"They made it clear that this was not a guarantee that we’d be on the show, it was a final audition," says Kelly.

The family was flown to Atlanta and reported to the studio the following day. During the final audition, two families were sent home because they were "kinda flat on camera," according to Kelly, but the Knigges made the cut and spent the next 2 1/2 days taping shows.

"These were long, 11-hour days," says Chris. "And we couldn’t have our cell phones."

Kelly speculates her family was a fit for the show because they have a mixture of different outgoing personalities. They also have a "country / city" dynamic with family members coming from both rural and urban parts of the state.

"We are ‘very Wisconsin’ – some of us even have a farming background – and I think the producers liked that," says Kelly.

Kelly says participating in the show live was more challenging than "participating" from home.

"There's a lot of pressure and nerves can play into it," she says.

Both Chris and Kelly had only positive things to say about Harvey. They particularly enjoyed his comedy acts and inspiring words between tapings.

"Steve Harvey was incredibly warm and genuine. What you see on TV is who he is," says Chris."And he really does have the perfect mustache." 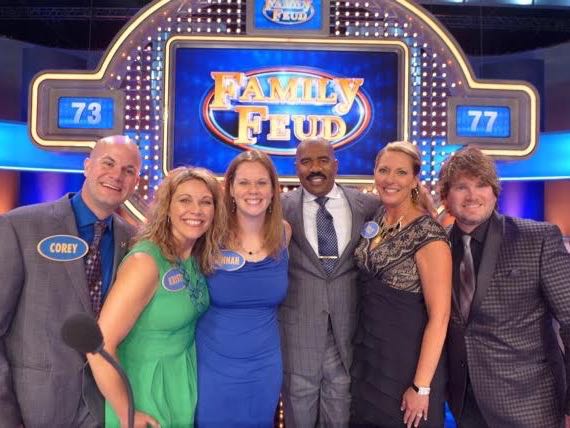 Chris, who is 47, remembers watching "Family Feud" as a kid and has vivid memories of the original host, Richard Dawson.

"Richard Dawson was drunk on bourbon, kissing all the women," he says.

Although they cannot disclose whether they won or not, it seems likely considering they spent almost three days in the studio. However, to find out for sure, the show airs on Thursday, May 4 at 6:30 p.m. on CW, channel 18.

Coincidentally, they are the second Wisconsin-based family to appear on the "Feud" this week.

"It was an incredible experience. I wouldn’t trade it for anything," says Kelly.