A setback with Jonute Svien's food truck this summer left him with no truck and a pile of debt. But, Svien says he's moving forward with more vigor than before.

In March, we announced the launch of Fresh Farm Bowls, a brand new food truck serving up internationally inspired fare with a farm-to-fork twist.

Owner Jonute Svien started off serving breakfast and lunch dishes at area parks and farmer’s markets, while waiting for the delivery of a food truck he’d ordered from a company in West Virginia.

"We shipped the equipment that we wanted installed in the interior of the truck down to the fabricator, who said he would install everything for us," says Svien, "And we were getting excited as the time approached for it to be delivered."

But, just a few weeks before delivery, Svien says all he heard from the company was radio silence.

We just got a memo from the food truck Builder that the truck is behind, will announce our new date within the next days we apologize. — Food Truck (@FreshFarmBowls) April 24, 2015

"We asked him to send over pictures of the finished truck," he says. "And he sent us photos of someone else’s truck. That’s when we started getting suspicious."

So, Svien hired a private investigator to look into the matter; and a few weeks later the fabricator delivered keys for what should have been a finished food truck.

"The truck arrived and we opened it up," he notes. "It was supposed to be decked out with stainless steel counters, walls, a prep sink and steam tables, but it wasn’t finished at all. The legs were missing from our steam table. There was a lot that wasn’t right."

Frustrated, but determined to keep moving forward, Svien says the situation made him even more resolved to make his business successful.

"I’m the kind of guy who stands back and says: ‘OK, there are evil people out there who do this, and apparently they get joy from making other peoples’ lives miserable. But, I’m not going to let it stop me from moving forward with my dream to serve people this delicious food,’" he says.

At first, he wasn’t sure of the direction he wanted to head. He’d lost a significant amount of money to the business owner in West Virginia, and was determined not to make the same mistake twice. He says it took him about three weeks, but ultimately he decided to downsize, pursuing the purchase of a food trailer (rather than a truck) with $15,000 in funds he had received from five investors through Fund Milwaukee.

"We were fortunate," he says, "Fund Milwaukee’s belief in what we do really helped us out during this tough time. We were able to afford to buy the new trailer without shutting down completely. Ultimately, they saved our business."

This time, Svien hired a consultant, who recommended a company called Freedom Trailers in Tennessee to build the trailer. And, while he waited for his new mobile kitchen to arrive, he went back to serving food from a pop-up tent. 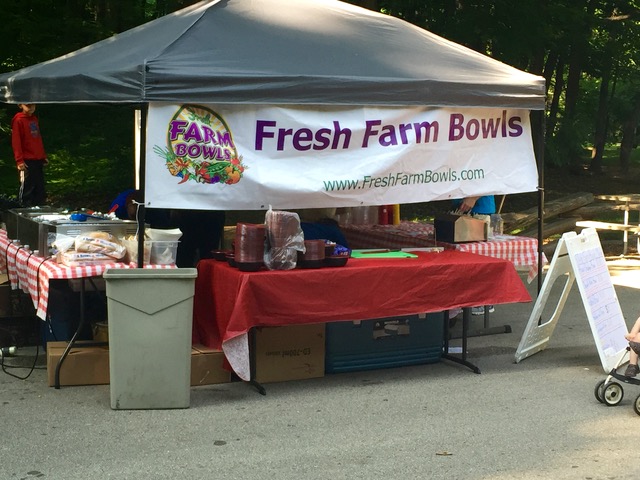 "We just kept going," Svien says. "We did two events at the Zoo, Irish Fest, the Strawberry Festival in Cedarburg and the Westtown Market.

Currently, the exterior of the trailer is bare bones, but Svien says he’s ordered decals which should arrive later this week, just in time for him to show off the trailer at the Bay View Bash Sept. 19, where he’ll be serving up old favorites like the chipotle pork bowl ($7.99) and his falafel sandwich ($5.99) along with a number of new dishes including a mac & cheese bowl ($4.99 or $5.99 with chipotle pork) and a Thanksgiving bowl ($7.99, includes turkey, stuffing, cranberry sauce, mashed potatoes).

Moving forward, Fresh Farm Bowls will be keeping regular hours at the Milwaukee County Courthouse on Tuesdays, Westown Market on Wednesdays, the U.S. Bank Building on Thursdays and Red Arrow Park on Fridays.

Svien says he also plans to keep the truck rolling, even through the winter months.

"In addition to catering, we’ll food at Red Arrow Park during ice skating Friday and Saturday nights," he says, "Along with as many other venues as we can arrange. We also hope to spread the service of the truck to Whitefish Bay, Glendale and Cedarburg in the coming months."