More French fare is coming to the former Coquette Cafe. But if your brain immediately conjures something stuffy and expensive, Fauntleroy's aim is to surprise and delight you.

Fauntleroy is the name of the new French restaurant, which will open later this summer in the former Coquette Cafe, 316 N. Milwaukee St.

Behind the concept are Chefs Daniel Jacobs and Dan Van Rite of Dandan and EsterEv, who announced in May that they would be taking occupancy of the space. It was an opportunity Jacobs says he uses to remind his staff that the past matters.

"I think this was an amazing piece of luck to be able to do this in a place where Sandy D’Amato established Coquette 20 years ago," he says. "It’s important to know our past. And Sandy was part of the start of it all; he helped put Milwaukee on the map. And we’re toying with a number of ideas that really pay homage to that."

In many ways, the French nature of Fauntleroy has become the city’s worst-kept secret. Numerous French dishes (many prospects for the new menu) have been served over the past month at EsterEv. In fact, an upcoming George DuBoeuf wine dinner on May 30 will showcase six courses, including pork belly with pickled fennel, 48 hour short ribs and Dungeness crab with pommes Anna, all which are likely contenders for the Fauntleroy menu. 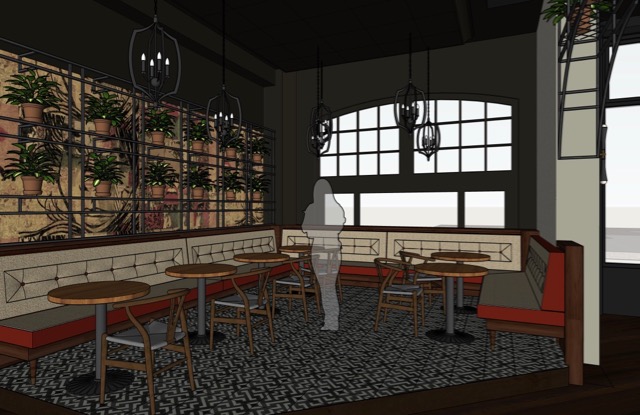 French, but not stuffy

The theme of the restaurant should be no surprise for those keeping their eye on the tide of dining across the nation.

Despite the recent closings of both Chez Jacques and Coquette, a new style of French cuisine has been on the upswing. In fact, the phenomenon was cited in 2017 by the James Beard Foundation as a trend to watch. Its impact has included both a return to classic French techniques and a rise in dishes like coq au vin and cassoulet, which have not only appeared on restaurant menus, but in recipes featured by popular magazines geared toward the home cook.

Both Jacobs and Van Rite rose up the ranks during a time when classical French training was the norm for chefs in training. And the techniques have remained with them throughout their careers. This was an opportunity, Jacobs notes, to explore them further.

"This restaurant is going to be very French," notes Jacobs, "But it will be our take on French food. The idea is really to create delicious, craveable dishes that people want to eat time and time again."

Jacobs says that the menu, which will contain a combination of entrees and small finger food items, is inspired by upscale French restaurants in New York like However, it’s built to be both affordable and accessible.

"It will be a tight menu of 22-25 items that are prepared well and priced well," he says.

And those items will be displayed on a striking tiered plate created by Jacob’s wife, Kate Riley, a potter whose work has made its way into restaurants across the city.

Entrees, which will be priced $17-26, include inventive French takes like brandade quenelle made with salt cod along with standards like steak and frites, and duck l’orange for two featuring ultra-crisp dry aged duck prepared three ways: as duck breast, duck heart and duck confit, which will be well priced at $65 to $70. The latter dish uses similar techniques to the Peking Duck served at Dandan.

Another featured dish will be poached salmon that’s been marinated in fish sauce and then poached in lemon oil.

"I’m not a fan of salmon," Jacobs notes. "But this dish yields this really spectacular piece of fish with an amazing flavor and texture. We’ve been serving that with fennel puree, fennel pollen. We’ve served it with pommes paillasson, shredded potatoes that are cooked in clarified butter, then pressed and cooked into a cake. It’s like the best possible version of McDonald’s hashbrowns."

The menu, he says, is a great example of the intense collaboration that takes place in their restaurant kitchens.

"This is about all the heads coming together," he says. "It starts with an idea from me or Dan [Van Rite]. And then Matt [Haase] really pushes us to take it to another level. And Blair [Herridge] fills in the gaps. In the end, we are able to create more delicious, better dishes that really push everyone to be better."

A French soul with a rocker attitude

Jacobs says that aspects of the restaurant also take inspiration from 1970s rock music, including the Rolling Stones’ album "Exile on Main St." which was recorded in the basement of Villa Nellcôte, a 16-room mansion in Southern France and which gained notoriety during the 1970s when band took refuge there to avoid paying the exorbitant taxes imposed on "high earners" in their native home of England.

"My parents were very much into the Stones," says Jacobs. "And both me and Dan gravitate toward the album. It’s an album that you start at the beginning and you play all the way through. The French connection to the album became the inspiration for tying the two together."

Jacobs describes the interior, designed by 360 Degrees, as "The Great Gatsby" meets "Wizard of Oz."

"There’s lots of green and gold and black and white," he says. "And there are nods to 1970s rock n roll … like a sign that says 1971, a reference to both the ‘greatest year of rock n roll’ and the year that Dan [Van Rite] was born"

In turn, the restaurant’s private dining area, which will seat about 40 and serve as both an event space and overflow dining area, will be called "The Green Room."

"We try to do things that make us happy. And this concept brings back memories for both of us. It captures our memories of life in the '70s, our love for rock music and our love for really delicious accessible food."

That sense of happiness and fun – elements which have always been a part of the way both Jacobs and Van Rite approach their work – bleed through every aspect of the restaurant, including the restaurant’s very French, yet playful name.

Jacob says the name began as a nod to Donald Duck’s middle name, but it’s taken on additional layers of meaning as attention has been brought to the fact that it’s a reference to "Little Lord Fauntleroy," a 17th century children’s novel by Frances Hodgson Burnett.

"If we’re having fun, other people will have fun," says Jacobs. "That’s the philosophy we used when we opened Dandan, and it’s the one we’ll be moving forward with at Fauntleroy."

Jacobs says that, once open, Fauntleroy will begin offering dinner Tuesday through Saturday to start, with lunch service added in the months following.

Watch OnMilwaukee for additional information as it develops.