In case you haven't heard, French food is cool again. It's also worlds different from the fussy, rich, classical cuisine that presided in the U.S. for decades. It's one of the reasons you should take a second look at Fauntleroy.

In case you haven’t heard, French food is cool again. It’s also worlds different from the fussy, rich, classical cuisine that presided in the U.S. for decades.

In fact, the new wave of French food that’s making its way across the nation is significantly more casual. It’s well priced. And it’s injected with new energy thanks to the creative use of global ingredients.

You don’t need to look very far to find solid evidence of the trend. New York’s Frenchette just ran away with the 2019 James Beard Award for Best New Restaurant. And it’s decidedly not because New York took home a significant number of awards (their winnings this year were surprisingly slim). It’s because the hip new brasserie is doing something different. So different, in fact, that it prompted The New York Times’ Pete Wells to write a review entitled "It’s Not Fake French, It’s Frenchette."

The new French restaurants aren’t just popping up in New York. In the Midwest, there’s  Taureaux Tavern in Chicago, which offers fun twists on classics like foie gras pâté with apple mostarda, candied cocoa nibs and toasted brioche and a (strangely) shareable version of lobster thermidor.

There’s also Grand Café, a contemporary French bistro in Minneapolis where Chef Jamie Malone has wooed guests with dishes like her version of Louis Durand’s Paris-Brest, which fills deep fried choux pastry with chicken liver mousse instead of whipped cream and tops it with burnt honey glaze and finishing salt. The dish assisted in earning the restaurant a place among Food & Wine’s best restaurants of 2018.

And yes, right here under our very noses, there’s Fauntleroy, 316 N. Milwaukee St., a restaurant which I’d argue is among the most compelling openings we’ve seen over the past year. 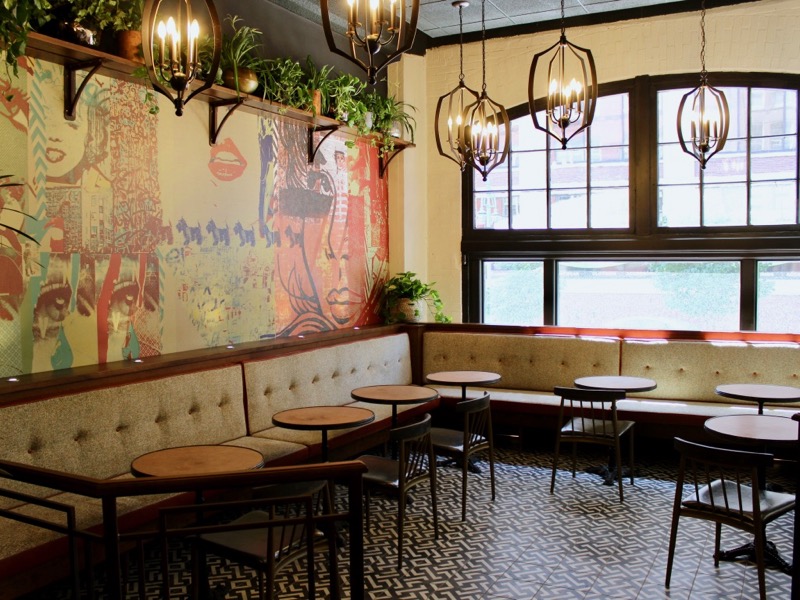 When the restaurant opened in the summer of 2018, I loved the look and feel of the restaurant. It was trendy and casual with just the right bit of French flounce. It was pop culture-infused and '70s rock-inspired. And the food was delicious.

But not quite a year later, I like the restaurant even more. It's traded their more formal menu for one that’s far more flexible. Rather than being divided into appetizers, salads and entrees, the items are listed in a more fluid manner, allowing diners to pick and choose items for sharing, dining solo or (if desired) to comprise a more course-driven meal.

Even better, prices have been adjusted to accommodate diners with smaller budgets.

A group of us ate at the restaurant last week. We were admittedly extravagant in our leisurely nibbling, heading home full to the gills (with leftovers to boot). So I was pleasantly surprised to find, after examining our bill, that we’d spent less than $40 per person on food. Add on the wine we drank and it hiked up our bill, but only by about $15 per person. Had we been more prudent in our choices, we could have easily enjoyed a great meal for far less.

You needn’t be fond of sharing to eat at Fauntleroy. But if you’re among those of us who love to nibble and sample numerous dishes, you’ll find the menu to be quite amiable.

There are a host of snacks like Gruyere-filled gougeres (bite sized pastries chock-full of warm, creamy cheese), tangy Basque-style deviled eggs and adorable eclairs filled with creamy, mild chicken liver pate. They come in plates of four for $4-6. 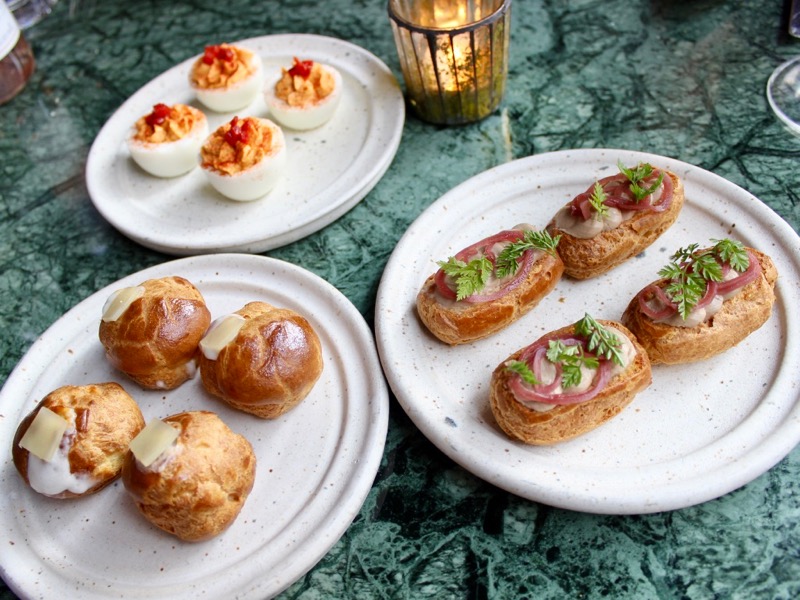 The same is true of Fauntleroy’s steak tartare, which is bright and lemony with a rustic texture that showcases the tenderness of the beef. It’s made with a nod to Daniel Jacobs' Jewish background, served on rye bread with plenty of texture from the crispy gribenes (tasty nubbins of fried chicken skin), $12. The dish could well be eaten as an entree with soup or salad; but it’s also conveniently divided into three hefty portions for sharing. 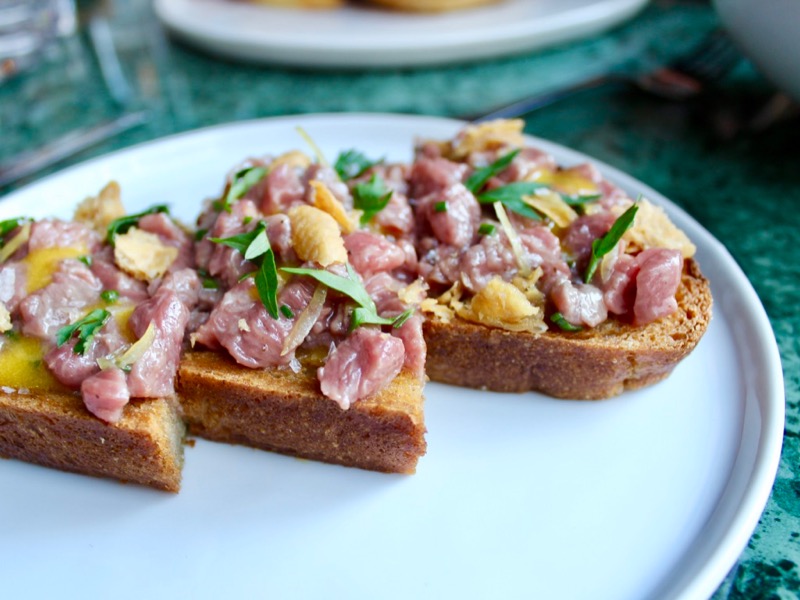 Smoked salmon rillettes, a rich salmon spread is served over crispy pommes paillasson (ultra crispy hashbrown-like potatoes) with a fresh fennel and dill salad ($12), makes for a pleasant starter as well, though it could easily be a petite entree unto itself. 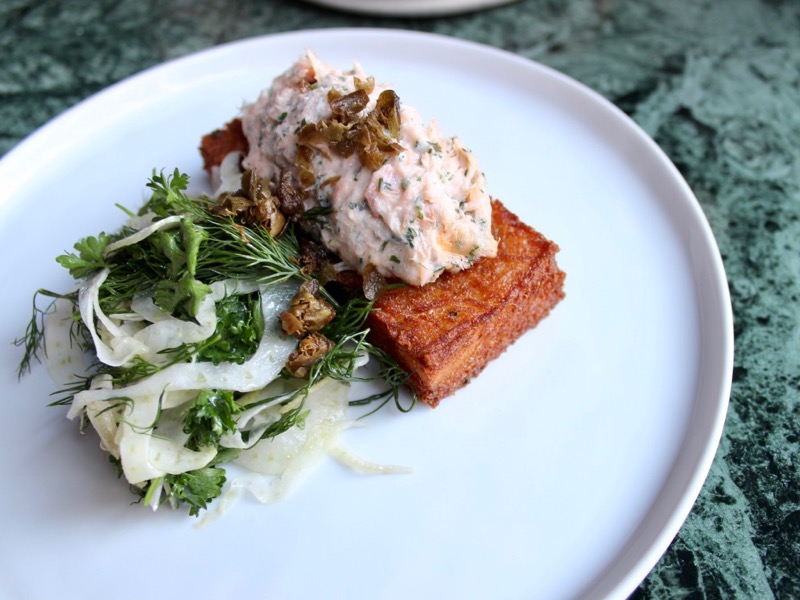 The same could be said for new dishes (you'll see more of these spinning on and off the menu in the months ahead) like the globally-inspired ricotta dumplings, which are spiked with lemon zest and served with shaved and charred asparagus, smoked onion and radish along with the zing of Mid-East sumac and creamy nutty tahini ($15). I’d gladly eat the entire dish myself; but it also makes for fine sharing. 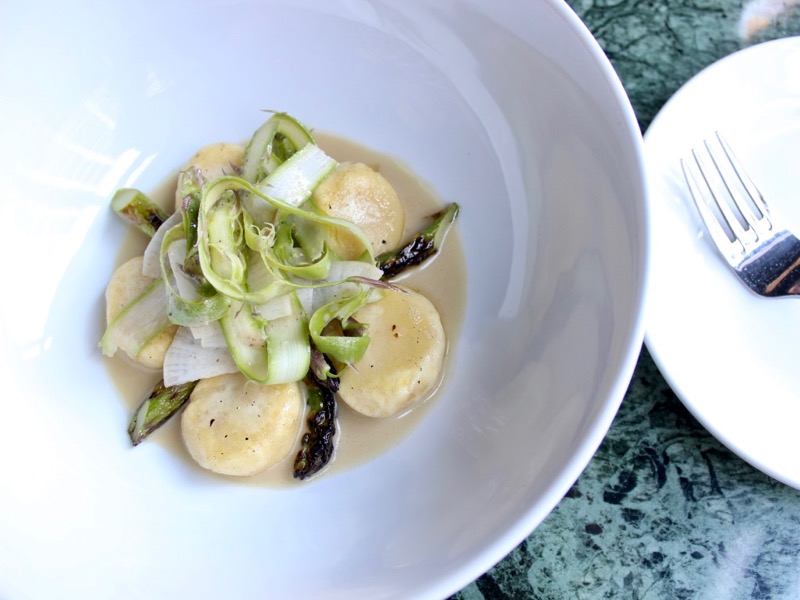 Don’t overlook the bread service, which makes a great accompaniment to soup or salad… or simply a mechanism to soak up any number of tasty sauces. For $7 you get a hefty portion of bread (from French baguette to slices of bierbread and brioche accompanied by well seasoned creamy butter for spreading. 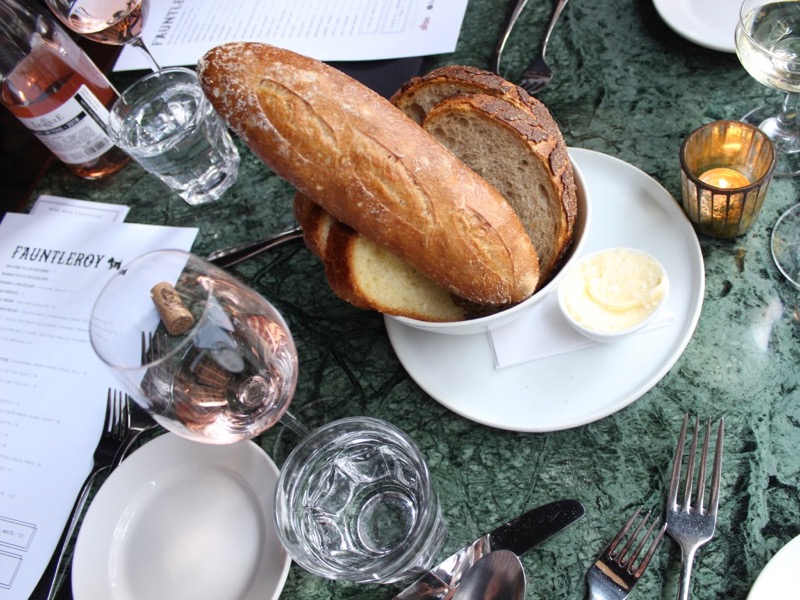 So good you’ll want it all to yourself

If you’re a lover of French onion soup, Fauntleroy’s is worth your attention. It's served in a traditional fashion with plenty of melted gruyere and baguette ($8). And, although it's not noted on the menu, the soup is vegetarian. That’s thanks to the clever use of mushroom stock and flavorful miso, a Japanese staple long prized for its ability to replicate the umami-rich flavors of meat. 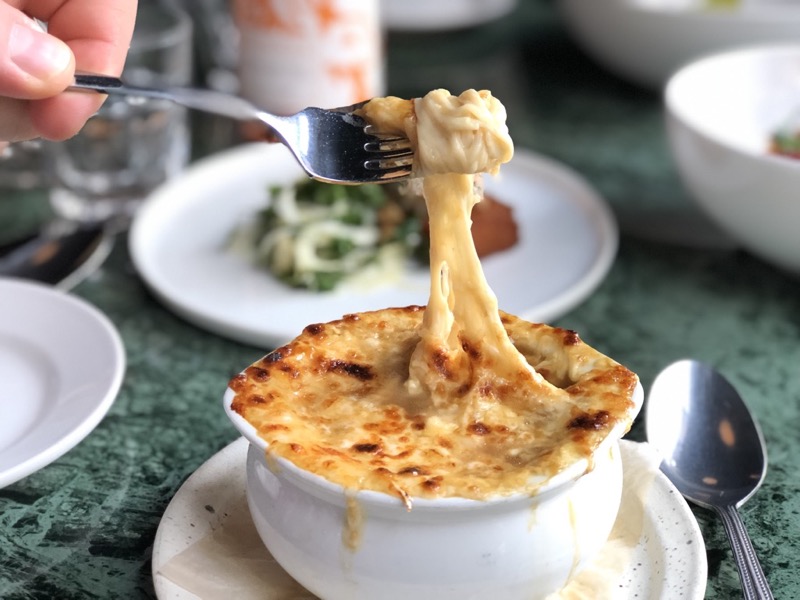 It would be a meal paired with the crispy grain salad, a modern presentation of earthy beets, amaranth, red quinoa, kamut, bulgur and crisped farro with a mild dressing of creme fraiche, horseradish and dill. It’s sweet, smoky, toasty and fresh all at the same time; and thanks to the grains, it has staying power if eaten as a healthful entree ($8). 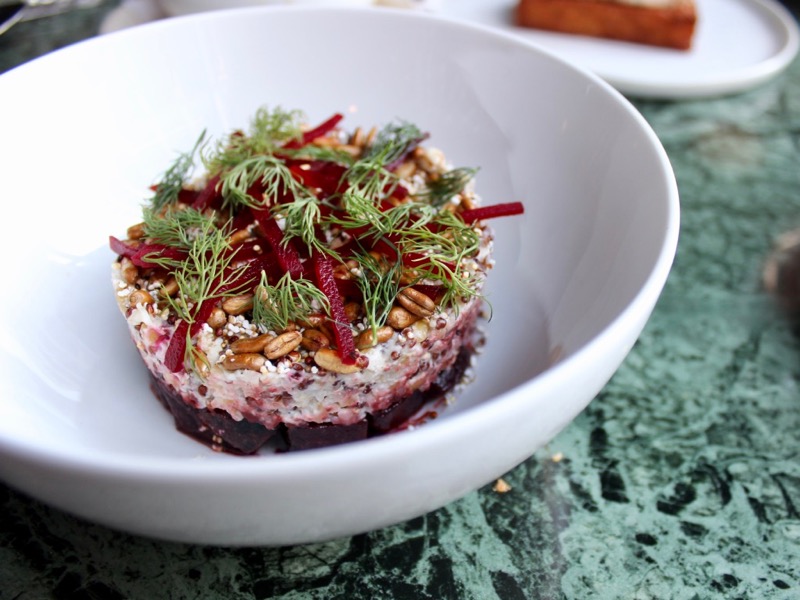 Richer options include the scallops, which are plump and rich with a beautifully executed sear. They’re served alongside cauliflower spiked with vadouvan, a French iteration of Indian curry powder. A bit of apple keeps the dish balanced and fresh tasting ($16). 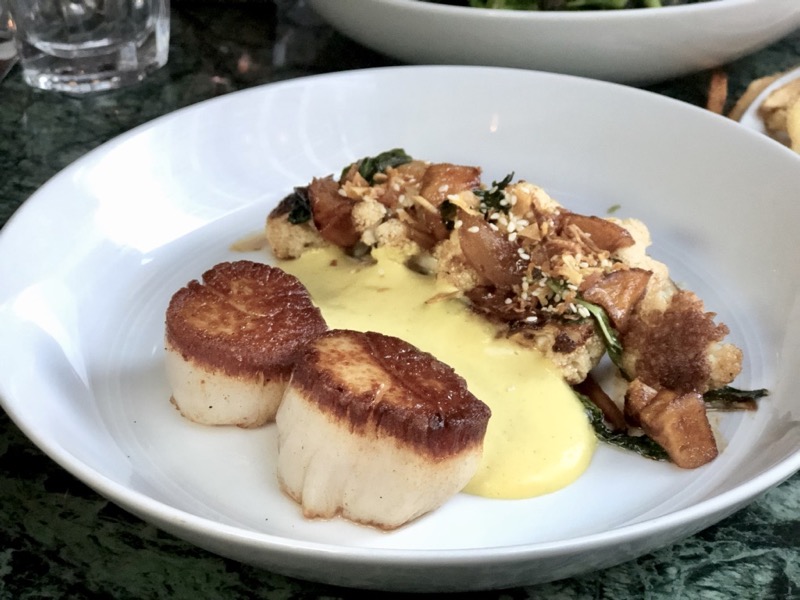 For those preferring to play it low key, there’s Fauntleroy’s bistro burger, the Grand Royale. It features two ground brisket patties, butterkase cheese and a tangy onion-rich royale sauce ($15 with a generous portion of crispy fries). Waaay better than the drive-thru. 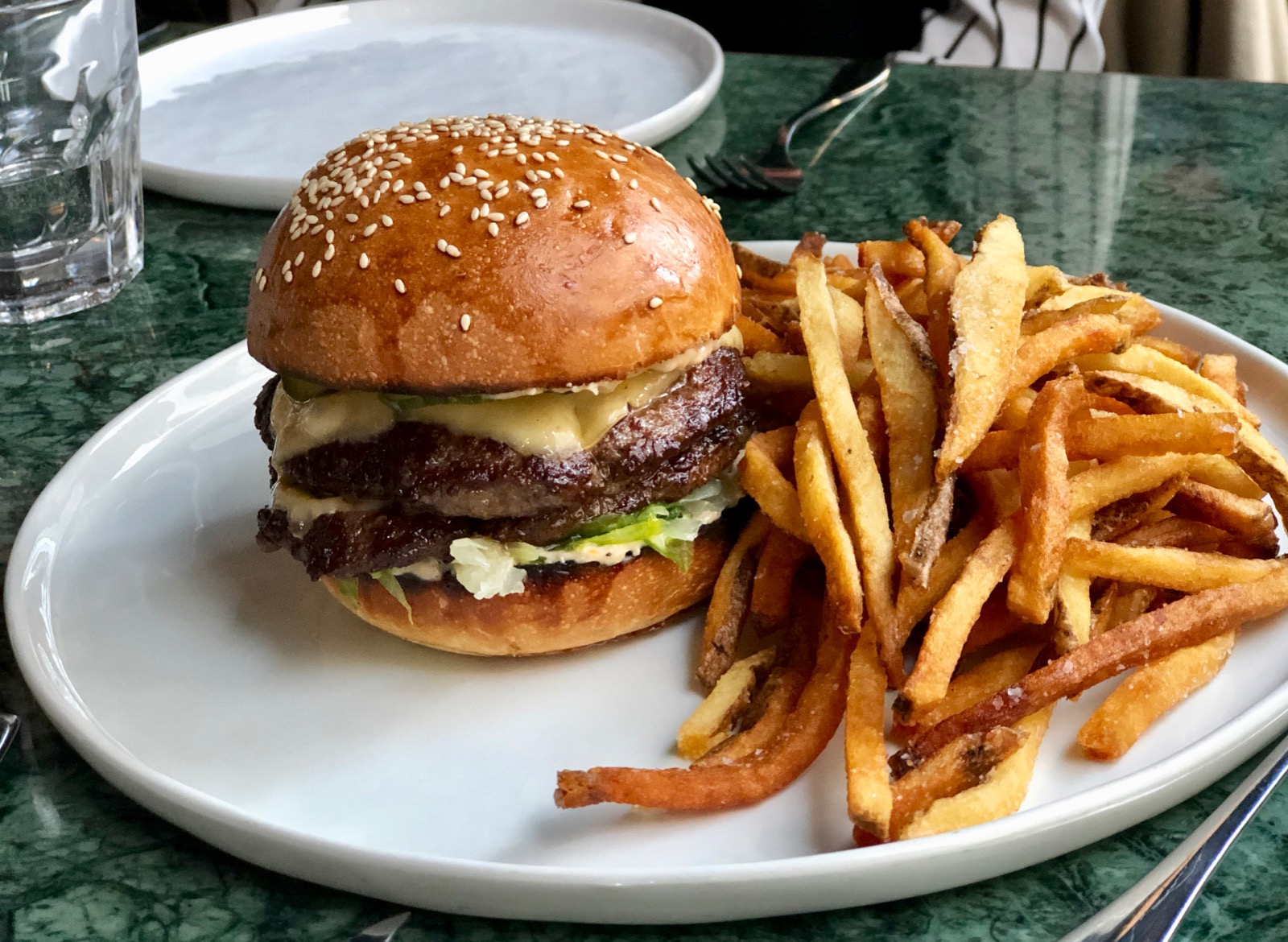 If you feel as if I’m talking all the French right off the menu, I’m not. The foundations of French cuisine are evident in nearly every dish, a few of which showcase techniques that take years of practice to perfect.

The half-chicken served over lemony bitter greens sounds simple, maybe even dull. But the crackle of the tasty skin and the perfectly moist flesh beneath is next to greatness, and the healthy portion of tangy greens are not only good for you, they also make the perfect foil for that rich, crisp skin ($23). 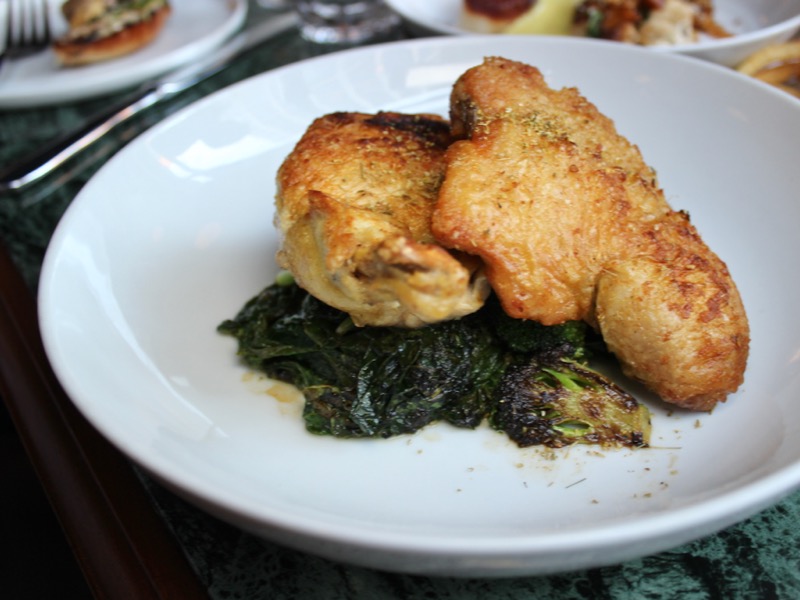 The same could be said for the delicious steak frites, which takes full advantage of the immense flavor and marbling in the Bavette cut sirloin steak, a butcher’s cut that gives pricier steaks a run for their money when well prepared. Pair the well cooked meat with flavorful peppercorn sauce and ultra-crisp thin-cut fries and you’ve got a casual dish that will easily satiate a true meat lover … or two ($26). This dish is one I’d happily split with a friend alongside a great salad or French onion soup. 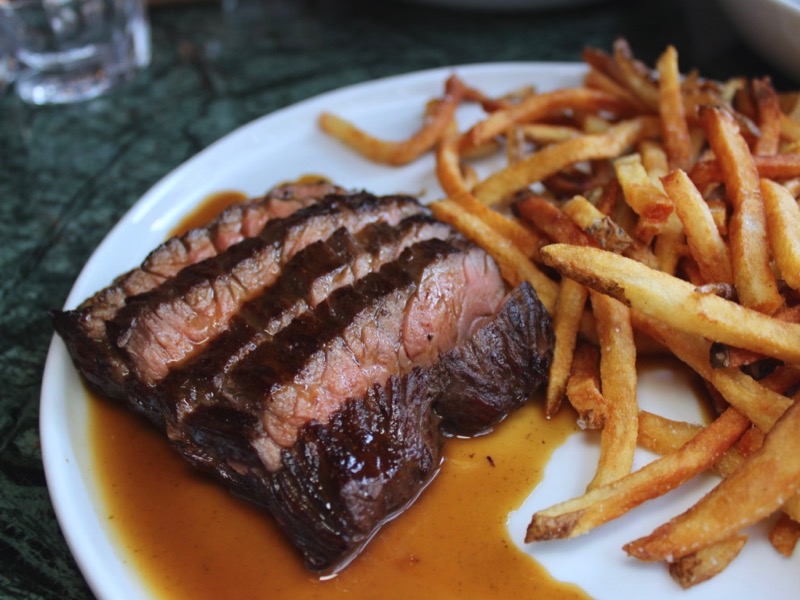 Fauntleroy is also among just a few spots I’d recommend as a stop for dessert. The dishes are well executed, generously portioned (I usually share) and come in a variety of flavor profiles to fit a variety of tastes.

If fresh and fruity is your jam, Strawberry is a madcap mix of crisp meringue straws, strawberry sherbet and pickled strawberries that captures the flavor of a perfectly ripe, sweet strawberry in every bite ($9). 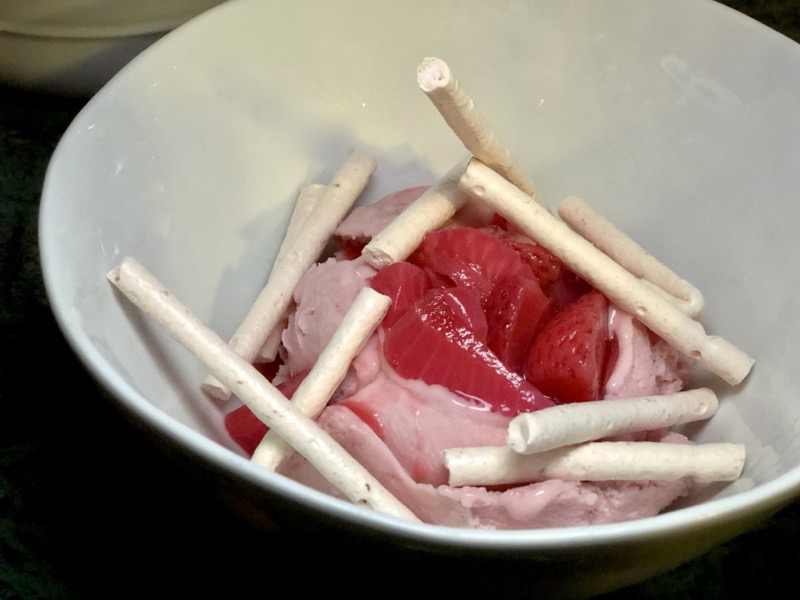 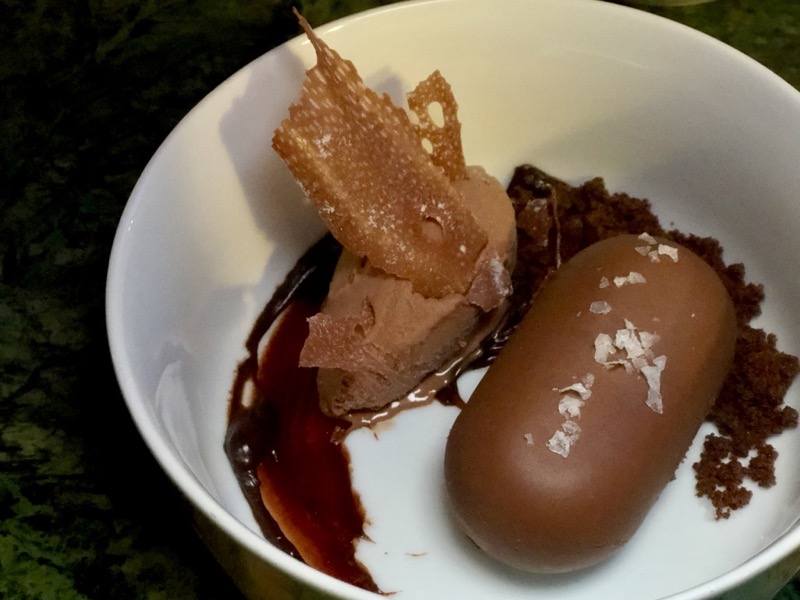