Favre's audible scores, but throws WTMJ broadcast for a loss

The ceremony Saturday to retire Brett Favre's number and put him in the Packers Hall of Fame was a touching and emotional evening. It was quintessential Favre, drawing up a play in the dirt. But it was nearly ruined for the folks at home by a terribly lackluster WTMJ broadcast.

In the end, Brett Favre went out the same way he came in.

No playbook. No meetings on the sideline. No listening to someone else over a headset. Sanding alone, the warrior had come home.

The celebration retiring Favre’s number and admitting him to the Packers Hall of Fame was as spectacular as only the smallest city in the NFL could pull off. It was full of schmaltz speeches, some good, some boring.

And it was another example of how local television can just about ruin even the most special events But more on that later.

The moments during the celebration were so memorable.

When he walked out of the tunnel, onto a sun dappled Lambeau Field, dressed in a suit and shirt open at the collar, it was as if the world erupted. It wasn’t an applause that started small and built.

From the opening clap it was a full-throated roar that went on and on and on. Favre stood in the field, turning this way and that, nodding his thanks, raising his arms in that famous touchdown stretch. He cried. He bit his lip. It was the absolute best in live theater. You could tell he had a lot of media training, and that's a good thing.

And one he said goodbye to the 67,000 fans who had come to see him, he went to the Hall of Fame ceremony in the atrium of Lambeau Field. And, after all the speeches and the videos, it was time for No. 4 to step up one more time.

He paid tribute to everyone. Everyone.

His family, his coaches, his friends, his teammates, his trainers, the security guys, the maintenance men. He forgot the chefs who cooked team meals, but it wouldn’t be Favre if he didn’t forget somebody.

He didn’t pull notes out of his jacket and spread them on the lectern. He didn’t have a teleprompter.

He was drawing up yet another play in the dirt. "You go here, you go there, the rest of you guys block, and I’ll throw it to somebody."

And it was a completion, for the touchdown that won the game.  It was a thank you and a goodbye, for him and for us. It was a perfect Saturday night, whether you were there in person or if you watched it on television. You can watch the ceremony here.

It is, perhaps, a mark of the stature of Favre that the evening was such a joy in spite of one of the worst locally produced television programs I’ve ever seen.

It was absolutely inexcusable for a station, WTMJ, that calls itself the official station of the Green Bay Packers.

It started with the incredibly awkward Lance Allan, a sportscaster, standing in the field as Favre walked out and then stood in the center of all that love. They actually wandered around, instead of being seated or placed in front of a podium. Allan was clearly overwhelmed by the spotlight and he covered it by fawning over Favre. We were the ones who were supposed to fawn; he was supposed to ask some questions that might actually be interesting. On the other hand, ask yourself if it would've have been Allan, who should it have been? Rod Burks? That's the best WTMJ and NBC26 have these days.

But Allan was a star compared with the telecast of the ceremony. Allan cut into the beginning of the ceremony with no lead in who was speaking. For a company with two stations – one in Milwaukee and one in Green Bay – and all the access and staff it needed, it was directed as if not much thought was put into what would happen on stage.

Let me give you an example:

Frequently during the two hours of the ceremony, the director cut away from the speaker to show other people. The unfortunate thing was that the other people we saw, almost every time, was just some random person from Green Bay.

This was a room filled with coaches and players and we got to see grocers and convenience store clerks and probably a banker or two.

There was absolutely no relationship between what was being said and what we were seeing. Commercials came and went while speakers spoke. Speakers, particularly Mark Murphy, fiddled with microphones and told long, rambling stories. At one point, Bart Starr's son was identified as Jesse Gage, Mike Gage's son – without explaining who either was. 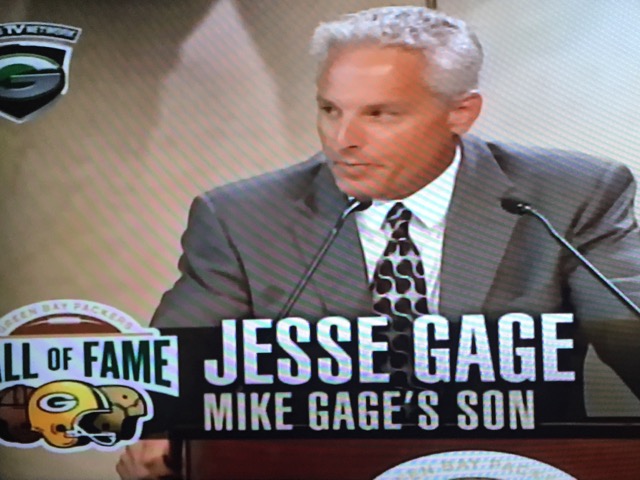 And what caused all of this was a lazy approach to televising one of the best moments in Wisconsin sports history. All they needed to do was locate, before the broadcast, where the interesting people were sitting. And then just move a camera in range and start shooting. It's not like this was a sudden news event. There had been months of planning that was supposed to go into this.

It was so disconcerting that it almost ruined the whole thing.

Fortunately, however, Favre rode to the rescue once again.

And we are not likely to see another one like him. Ever.