And then there was one: The search for Willie Bedford

On Tuesday night, there were three missing photos on the Wall of Faces list of Wisconsin fallen. But relatives of Carl Leslie Crowley and Rudolph Glenn Valenta have now provided photos that transform their names into something far more memorably human. Now that leaves Willie Bedford, the last man without a photo on the Defense Department's list of 1,161 service members from Wisconsin who died in Vietnam.

And so the search is on for Willie Bedford, the last man without a photo on the Defense Department’s list of 1,161 service members from Wisconsin who died in Vietnam. Only a few states have found all of their photos.

On Tuesday night, there were three missing photos on the Wall of Faces list of Wisconsin fallen. But relatives of Carl Leslie Crowley and Rudolph Glenn Valenta have now provided photos that transform their names into something far more memorably human.

We turned to local media this week to publicize the last three names in the hopes of finding them before Memorial Day. My journalism students at UW-Milwaukee had been trying to find the last 64 photos since February. By May, the list was down to three. This is part of a national project to put a face with every name on the Vietnam Veterans Memorial Wall. There's nothing like the power of the media to bring the community into the task.

The students joined the search at the behest of a Wisconsin father whose son died in Afghanistan. In doing so, they joined the list of many volunteers, veterans and reporters over the past few years who have found photos – including Wisconsin Public Radio, which has done exhaustive research on this project, and Bryce Kelly, a Medford teacher who found hundreds.

There’s something pretty great about the fact the project started partly with K-12 students and ended with UW-Milwaukee students helping drive it home (although they were by no means the only people contributing down to the wire. That’s the inspiring thing about this project: How many people care. Local author Tom Mueller and veteran Terry Kramer also devote countless hours to this effort). 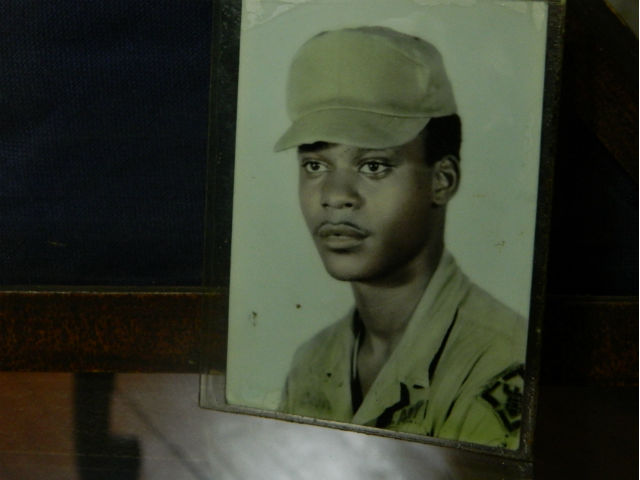 "That’s the last one," said Robert Crowley, when I went over to talk to him at his family home on North 49th Street in Milwaukee on Wednesday evening. He pointed to a photo of Carl Leslie Crowley that he and his brother Andre had tucked into their father’s WW2 flag case. It was the only picture they have.

Tiffiny Neal, co-founder of the Wisconsin Association of Black Genealogists, was instrumental in finding Carl. She sent me his obituary on Tuesday evening, and I was able to use it to track down his family tree. The first 10 or 15 numbers or so were disconnected, but then the right Crowleys answered. It turns out that they had seen the story on Channel 12 the night before and were in the process of conferring about a picture.

Carl was one of 12 siblings. His mother was a cook in various Milwaukee Catholic schools for 40 years and only missed one day of work in all that time – the day her husband died. The father worked at A.O. Smith. The family migrated to Milwaukee from Kansas City in the 1940s.

When Carl’s mother died a few years ago, his brother Robert packaged up and parceled away her belongings to various family members. He gave most of the pictures of Carl to Carl’s children (there are three; one in Milwaukee and two in California). He didn’t realize that there was still one tucked into the case with the flag. Now he’s happy because he had a photo to provide.

"I am proud that he’s getting the recognition for what he did for our country," Andre said.

Robert went to the Vietnam Veterans Memorial Wall in D.C. and found his brother’s name there.

Andre was shocked – to say the least – when he turned on the TV news and saw the Vietnam story about the missing three names. He was drawn into it because he recognized another Milwaukee man whose photo we found – Vincent Wright. He went to elementary school with him. Then, they announced the name: Carl Leslie Crowley.

Andre is older than Robert, so he remembers Carl more. The family called him "Junior."

"He was an athlete," Andre says. "He played hardball and softball. He was a swimmer. Strong as an ox. He lifted weights. And he was a hard worker. He did whatever he had to do, and he did it to his best." Carl worked in foundries before joining the military for better opportunities, his brothers said. He drowned in Vietnam in November 1969 at the age of 23.

Five of the siblings also served in the military, and their father, also named Carl, was a World War II veteran. Andre remembers the faintness of his mother’s voice when the man showed up at the door with the news that Carl had died.

People who knew Rudolph Valenta – and people who knew people who knew him – also saw the TV coverage. Tammy Adams emailed to say she was the daughter of Valenta’s widow, Christine, who still lives locally. By Wednesday evening, she had emailed over a photo.

"This was very emotional for my mother, but she would like to say she is very glad you are doing this and feels it is long overdue," she wrote. "Vietnam was a forgotten war, and the troops were never thanked. Many of them continue to suffer with wounds not seen with the eye. She wants people to know Rudy was a very kind, funny man who liked helping others."

He dropped out of South Division High School and joined the service at age 17. Christine met Rudy when she was 14.

"He came home on leave, and they were married. He then left for his second tour of duty, and he was killed in action shortly thereafter," Tammy wrote. Her mother remarried to Tammy’s father, who was also in the Vietnam War. They have been married for 42 years and have three children. We’d found Christine’s name in an earlier archival search, but the trail ran cold because her last name had changed so long ago.

And it turns out that most of the other people who cared about Rudolph Valenta are gone, which is probably why he ended up on the final list of missing (Vietnam veterans groups are trying to also do an accounting of service members who enlisted from other states but had deep Wisconsin roots, but the Wall of Faces uses the Defense Department total).

Linda Schauer saw the coverage on Channel 6 and emailed to say she knew Rudy in high school; he was an usher at her wedding. She and her ex-husband, Keith, spoke fondly of the young man who went to war.

They all hung out on the city’s near South Side.

But Schauer couldn’t sleep after hearing Rudy’s picture was missing. It saddened her. "He was a sweet kid. A nice kid. A loner from a dysfunctional family. He is a non-person without a picture. It bothers me. We have to do what we can. He was worth more than that."

She was going to hunt through all of her old pictures in the hopes of finding him, but then Adams emailed one over.

"I think he joined the service because he was looking for a place to belong," said Schauer. "He was a loner kid. It bothered me all night. It was like he never mattered. But he did. He was a good kid. He was never in trouble. But he was always in the background."

Keith Scheffler said that Rudy’s mother is deceased, and his father died in an accident when he was a child. He had one sibling, but she is also now deceased. He had a best friend – who is now deceased.

One by one, the people who have living memories of Rudolph Glenn Valenta are fading away. Keith recalls Rudy hanging out at the local Boys and Girls Club and being good at archery.

"He was a young man just looking to belong," he said. "He should be remembered. He meant something to someone. He shouldn’t be forgotten."

Bedford did also, but finding his photo is elusive. However, there are active leads – and good ones.

My student reached two of his siblings, but they have no pictures of him. MPS checked the three high schools he attended, to no avail. A service member in his platoon had no picture; a high school friend wrote in, but didn’t have one either (the military photos burned in a fire in St. Louis in the 1970s).

On Wednesday night, though, I reached a Bedford relative who also had no picture but who sketched out a fuller picture of his family tree. There’s hope. And if he ever sat before a camera, we will find that picture.

If you knew Willie Bedford, please email me at jessicamcbride05@live.com.

KarateAmerica goes on a $19,000 Target run for local vets

Fire departments, VA partner to help veterans in need get to the right place