First and Bowl, a block south of the Mayfair Collection and just off the I-41 freeway ramp at 2969 N. 114th St., is centered around the sport of football bowling, which the bar's website describes as "a combination of football and bowling plus a little bit of drinking (not required)."

From hammering nails into tree stumps to driving golf balls to flinging axes, bar culture has really branched out in Milwaukee, where it’s clear folks no longer are content to chat with a friendly stranger one bar stool over.

One of the most unusual sports-fueled taverns has just opened in a once heavily industrial part of western Wauwatosa that has also rapidly been changing.

First and Bowl, a block south of the Mayfair Collection and just off the I-41 freeway ramp at 2969 N. 114th St., is centered around the sport of football bowling, which the bar’s website describes as "a combination of football and bowling plus a little bit of drinking (not required)." 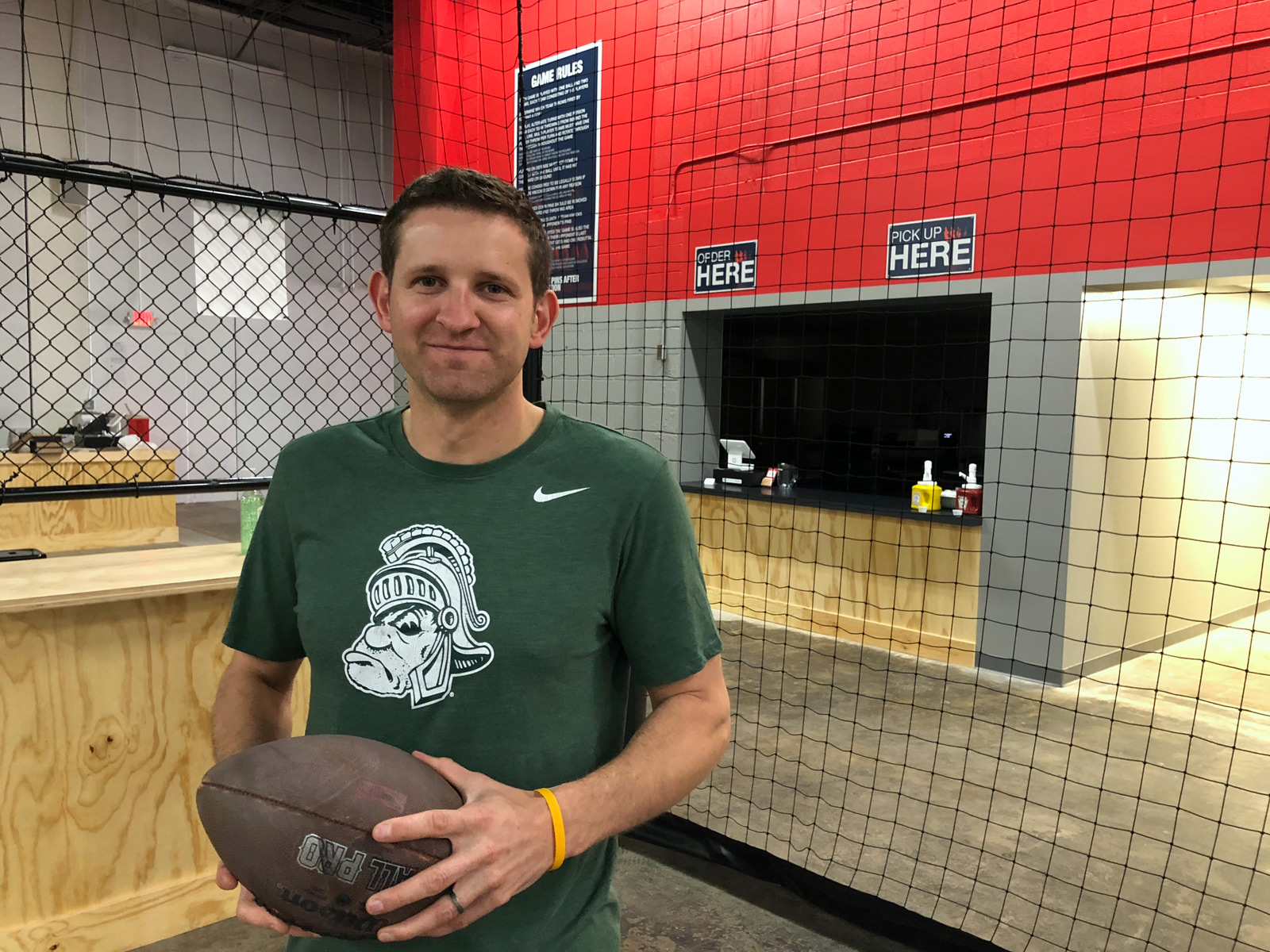 The main part of the sprawling space is filled with more than a half-dozen lanes with bowling pins set up on opposites sides of the 32-foot lanes. Opposing teams each stand near a set of pins. The goal is to throw a football and take out as many of the opposing team’s pins as possible.

"It can be one, two, five people on a team, whatever you want to play with," says co-owner Bryan MacKenzie (pictured above), "and one football, and you just alternate back and forth. The game is over when one team's got them all down.

"So, when we would have normal operations, it's 10 bucks to get in and play, and then you can play as long as you want but if you just go find a lane, or find other friends to play with, or some strangers, maybe. Then, if it's completely filled up, then you kinda just get in line and, when a team loses you take their spot." 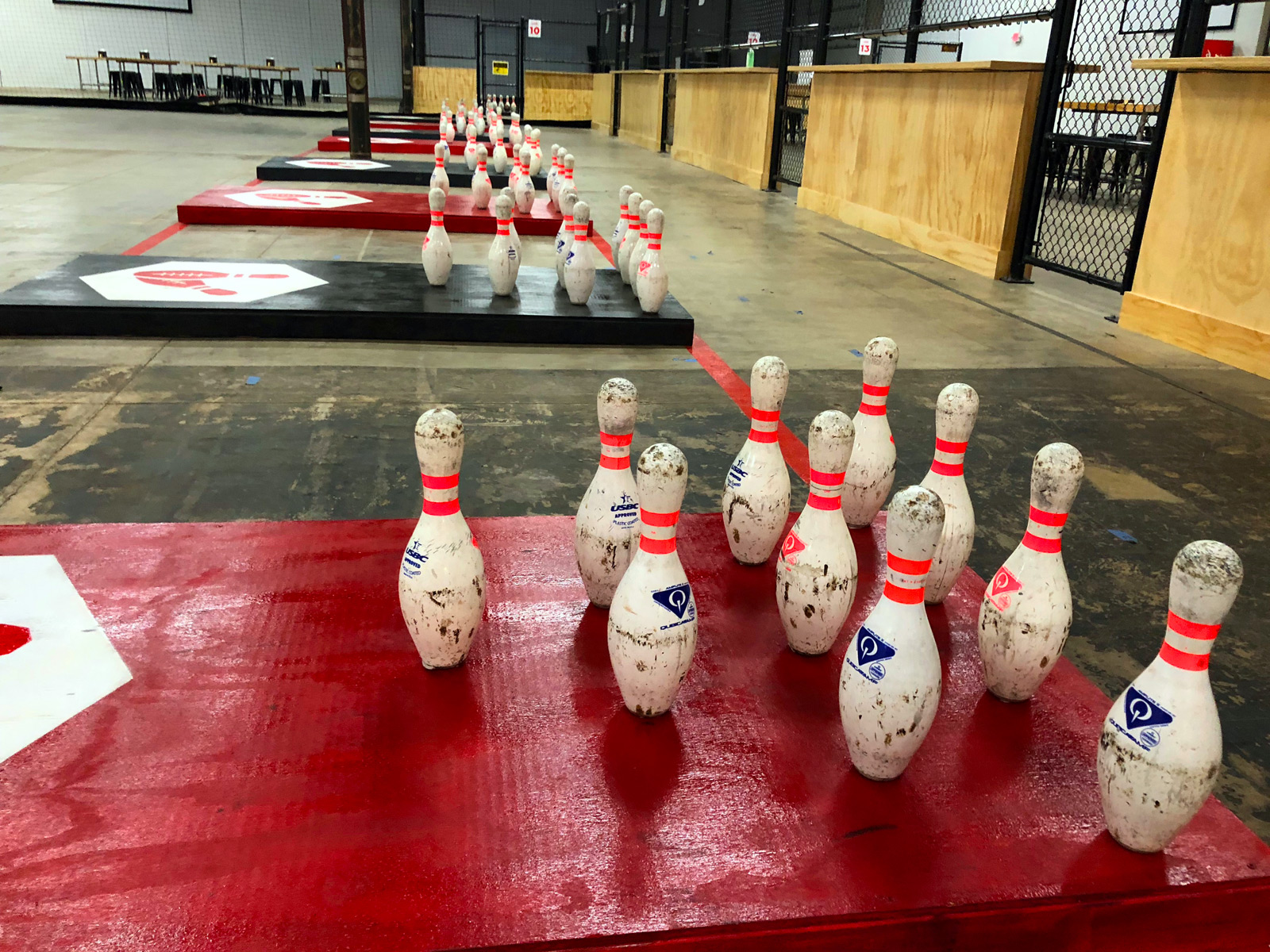 MacKenzie says that if an errant ball from an adjacent lane knocks over pins in your lane, that still counts. 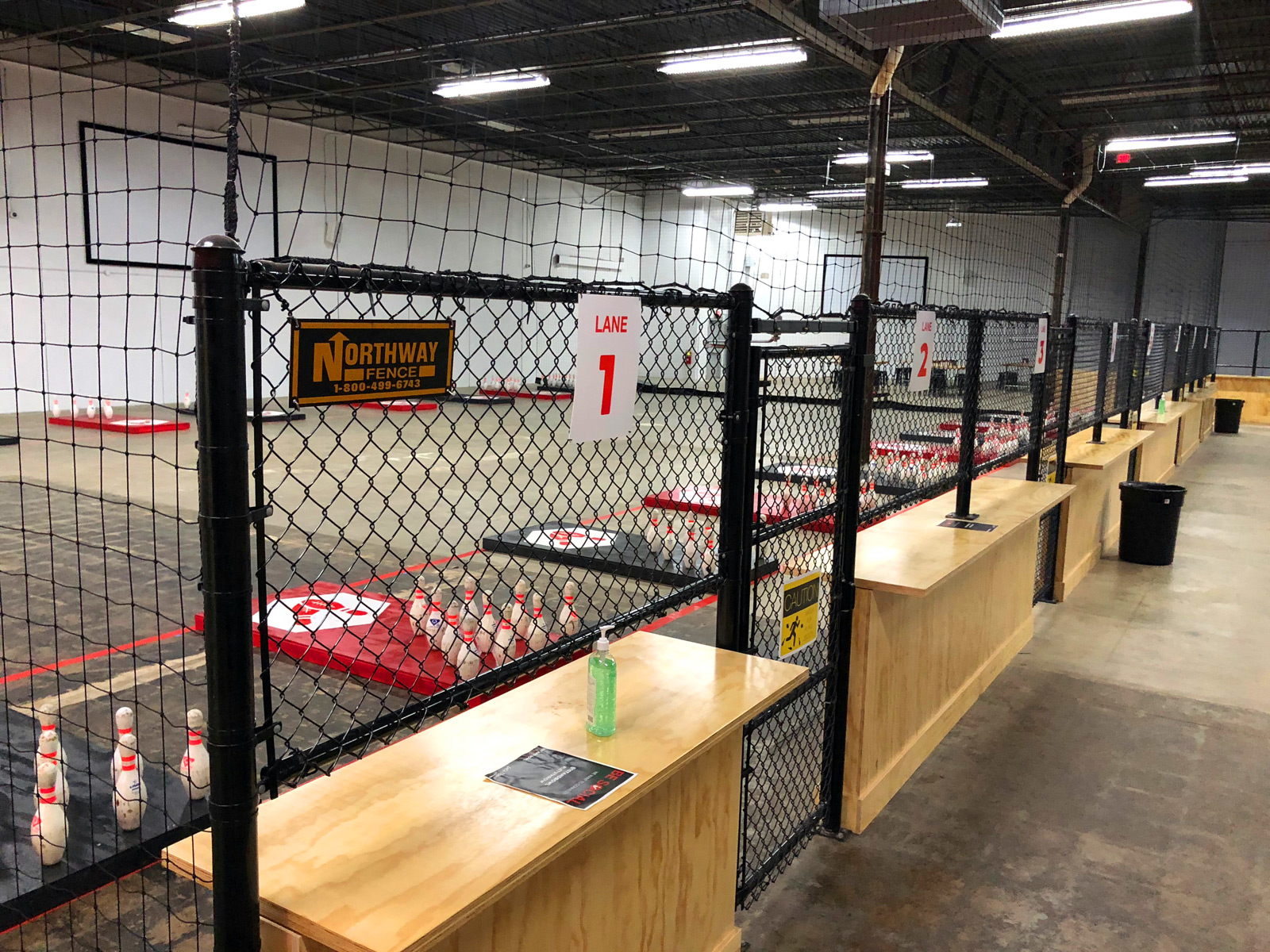 MacKenzie says he discovered the game at a similar business, founded by Chris Hutt – who calls the sport fowling – on a trip back to his native Detroit.

"He created a bar over there and I was home visiting family and we saw it and said that looks like fun, Milwaukee should have a place where."

The businesses, MacKenzie says, are unrelated.

"I reached out to him several times and he told me early on that you can't patent or trademark a sport so the only thing would be the brand and we said we think we can do this a little bit differently. We were confident that we could spin it our way and that's what we've done." 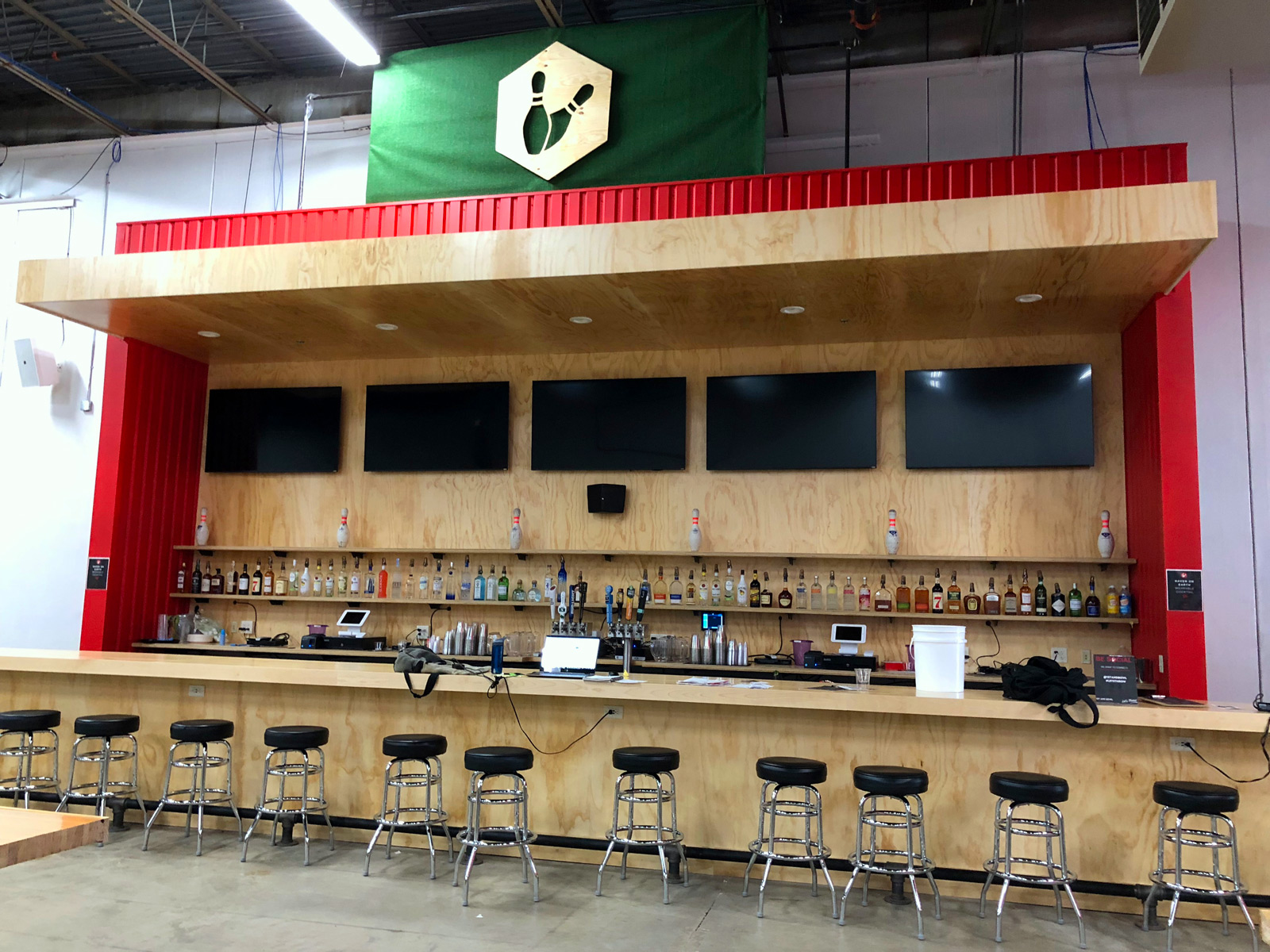 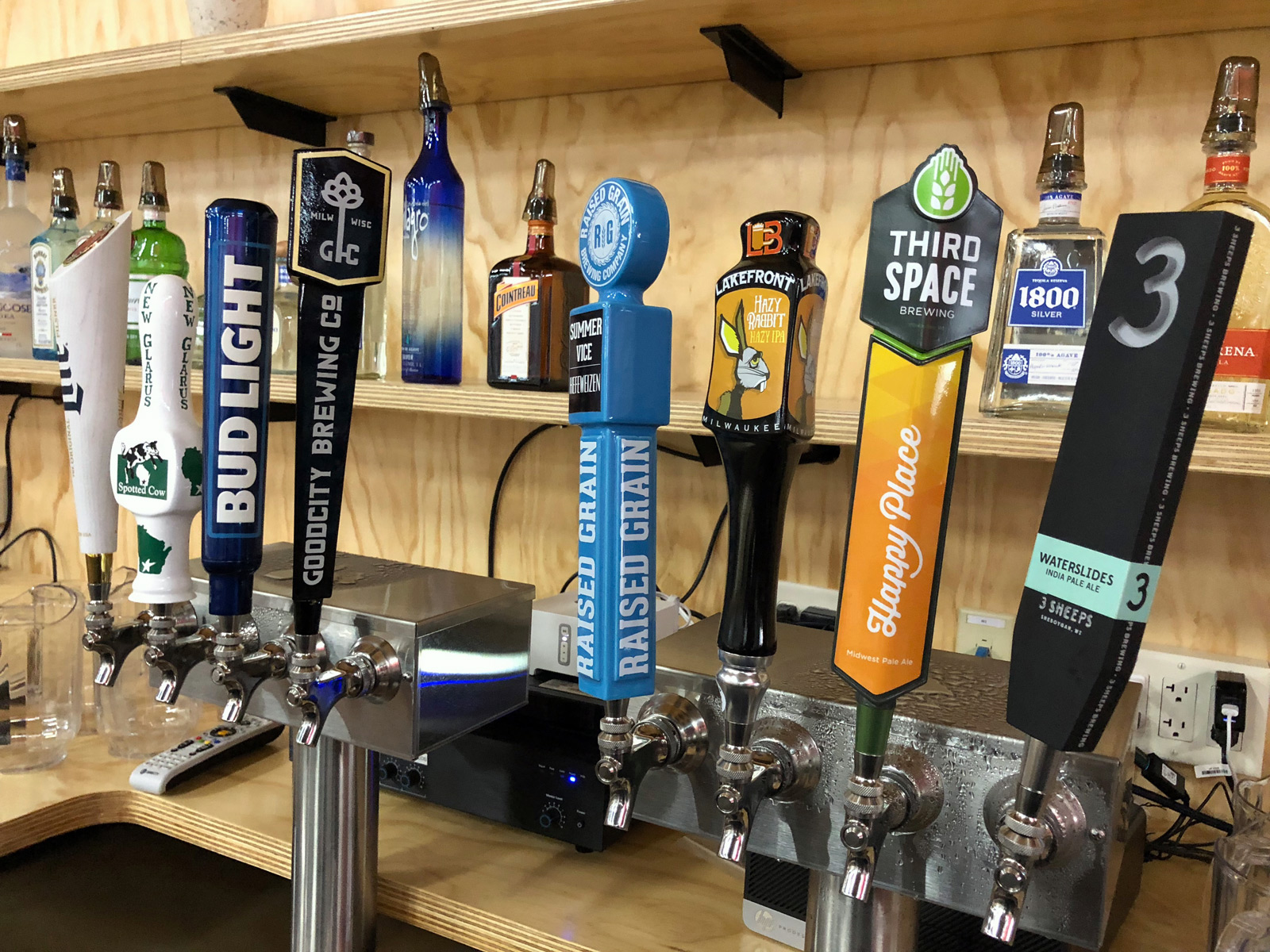 The spin at First and Bowl is a full-service bar, with everything from Miller Like and Hamm's to Hinterland Pils and Toppling Goliath on the beer list – on tap and in cans – ciders, ManCans of wine and, of course, mixers and liquors for cocktails.

There’s also a kitchen behind a service window across from the bar. 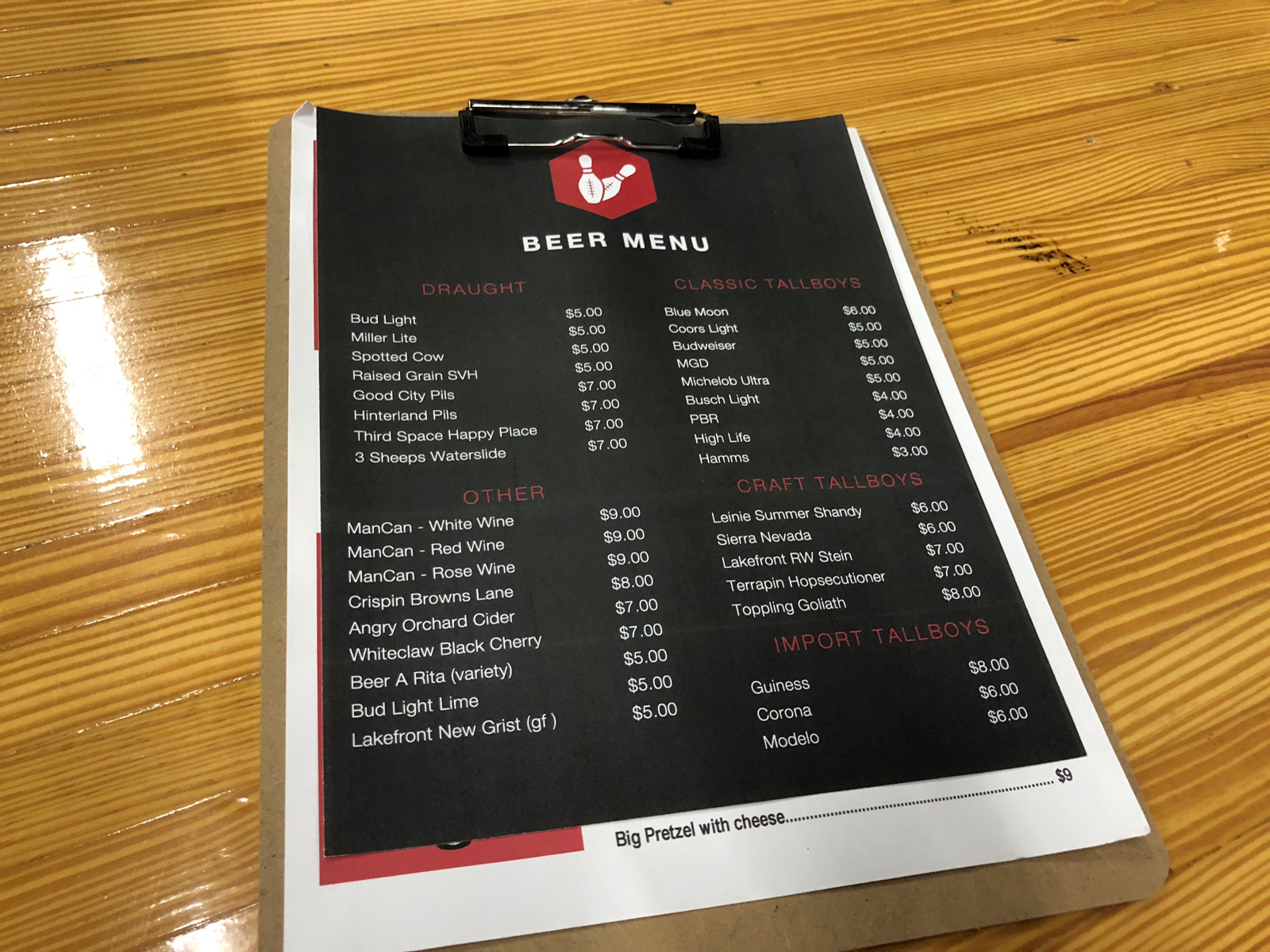 "We're starting with a little bit of a limited menu," says MacKenzie, "but it's kind of bar food: pizzas, wings, sandwiches, that kind of stuff. Then, down the road, when we feel more confident that we're ready to add to that then we're going try and make it a little bit more. Right now it's kind of what you'd expect when you come to a bar."

Community tables in the center of the space were built from lanes salvaged out of a bowling alley. 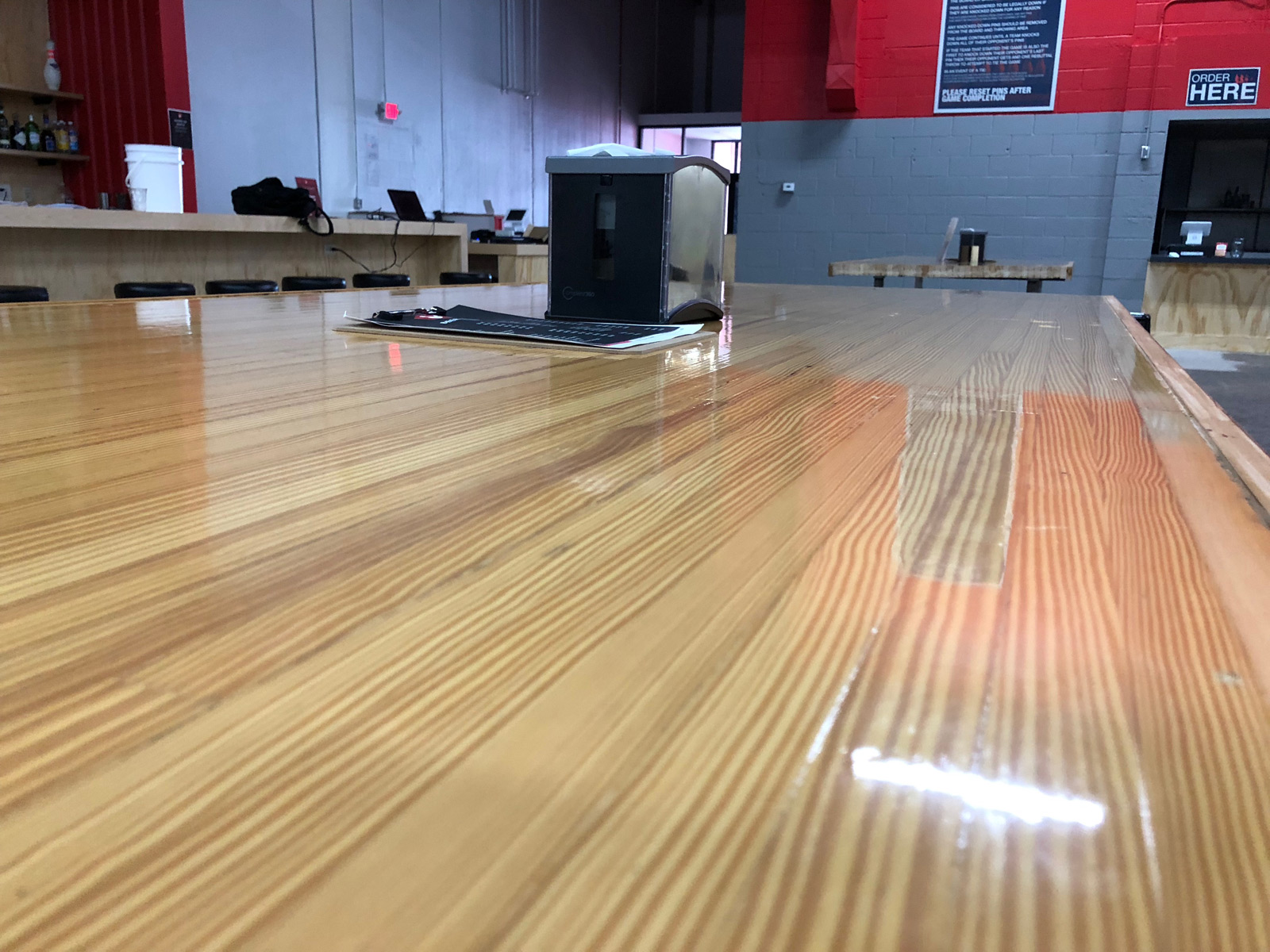 Though the venue is clearly a bar, it also has the vibe of a recreation center, like a batting cages business or something similar and so I asked MacKenzie if families are welcome.

"You have to be over 10 to be able to go in there," he says, pointing to the caged-off football bowling area, "just because of the risk of smaller kids getting hit with something, but they're certainly welcome.

"We’ll have an (age) cut-off but during the day, certainly, they’re welcome, and we've got the screens to watch the game, and we've got a couple sets of bags and things like that that are easier for a set of kids, so if families come in to play with kids there's other things to entertain them."

MacKenzie says that he and his co-owners Tim Johnson and Craig Galarneau – all of whom have kept their day jobs and hired an experienced general manager to run First and Bowl – spent a long time trying to find the right place and news reports from last year went so far as to say the place would open in other parts of town.

This #football #bowling or #fowling maybe isn’t as easy as it looks. @firstandbowlmke Story today @onmilwaukee

There were possible sites in the Menomonee Valley and in Walker’s Point, too.

"We’ve been working on this for a couple of years and the big crux finding a building with high ceilings, open space, that was still reasonable price and wasn't in disrepair. We looked at probably 20-something different buildings and we had a handful that fell through because we couldn't get the zoning, variance from industrial to commercial, or the roof had a massive leak and the landlord didn't want to put any money into it, or landlords didn't believe we were a real business and wouldn't meet with us.

"We found a couple that were awesome, that were like old gyms or they were already ready for us, but then they wanted three times the rent that they want here. It was a fun experience but I'm glad we found this place because this one ended up being the best sort of blend of everything we needed."