Come for the big game, stay for the cocktails: DEER CAMP opens Feb. 28

We told you DEER CAMP was coming, and you can officially see it for yourself when the venue officially open its doors to the public later today. In the meantime, here's a preview of what to expect.

We told you DEER CAMP was coming; but you can officially see it for yourself when the venue officially open its doors to the public at 1023 N. Old World 3rd St. on Friday, Feb. 28 beginning at 2 p.m.

In the meantime, here’s a peek at the massive, yet imminently cozy new venue from Hackbarth Hospitality Group (the owners of The Atrium, Birch, Camp Bar and Sound by Design). 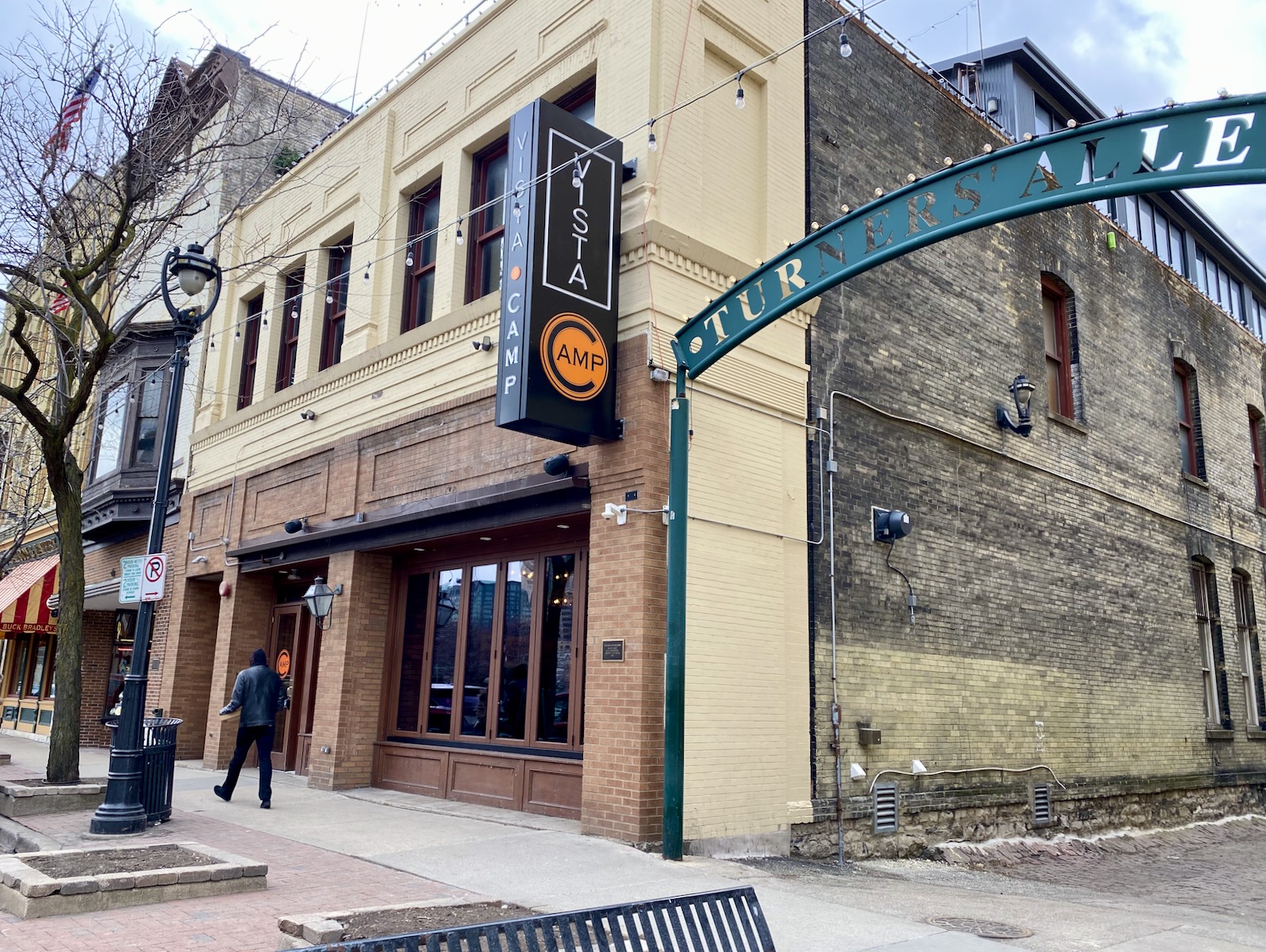 The newly remodeled first floor venue, which formerly housed Trio (and before that, Brass Alley), capitalizes on everything fans love about Camp Bar in a space that’s likely four (or more) times the size. It showcases the largest fireplace of any Camp Bar location, along with over 40 mounted deer (undoubtedly more than you’ll spy anywhere else in the Deer District) and an assorted crew of fish, foxes, racoons, squirrels, moose and elk frolicking amongst countless rustic signs.

Walk into the "Game Room" (that pun should be lost on no one) and you’ll find a cozy retreat, complete with a full bar, high- and low-top tables and a cozy lounge area that seats four or five. The decor showcases exposed cream city brick, hardwood flooring and double-tiered antler chandeliers, along with blaze orange upholstered stools, rustic signs, bear rugs and plenty of taxidermied furry friends. 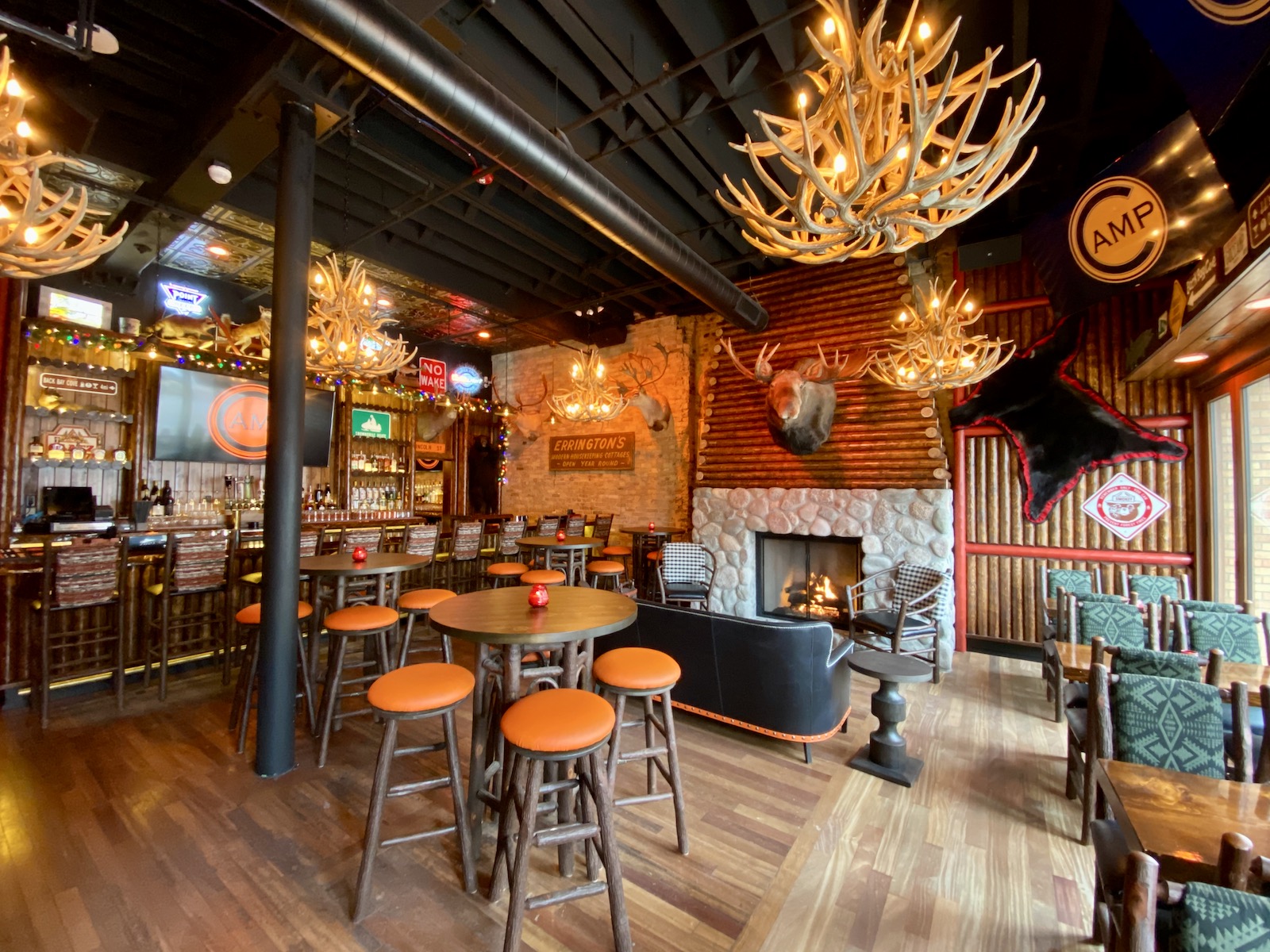 The impressive natural stone gas fireplace comes complete with a leather couch for lounging, along with two rustic chairs sporting a combination of leather and black and white checkered upholstery. 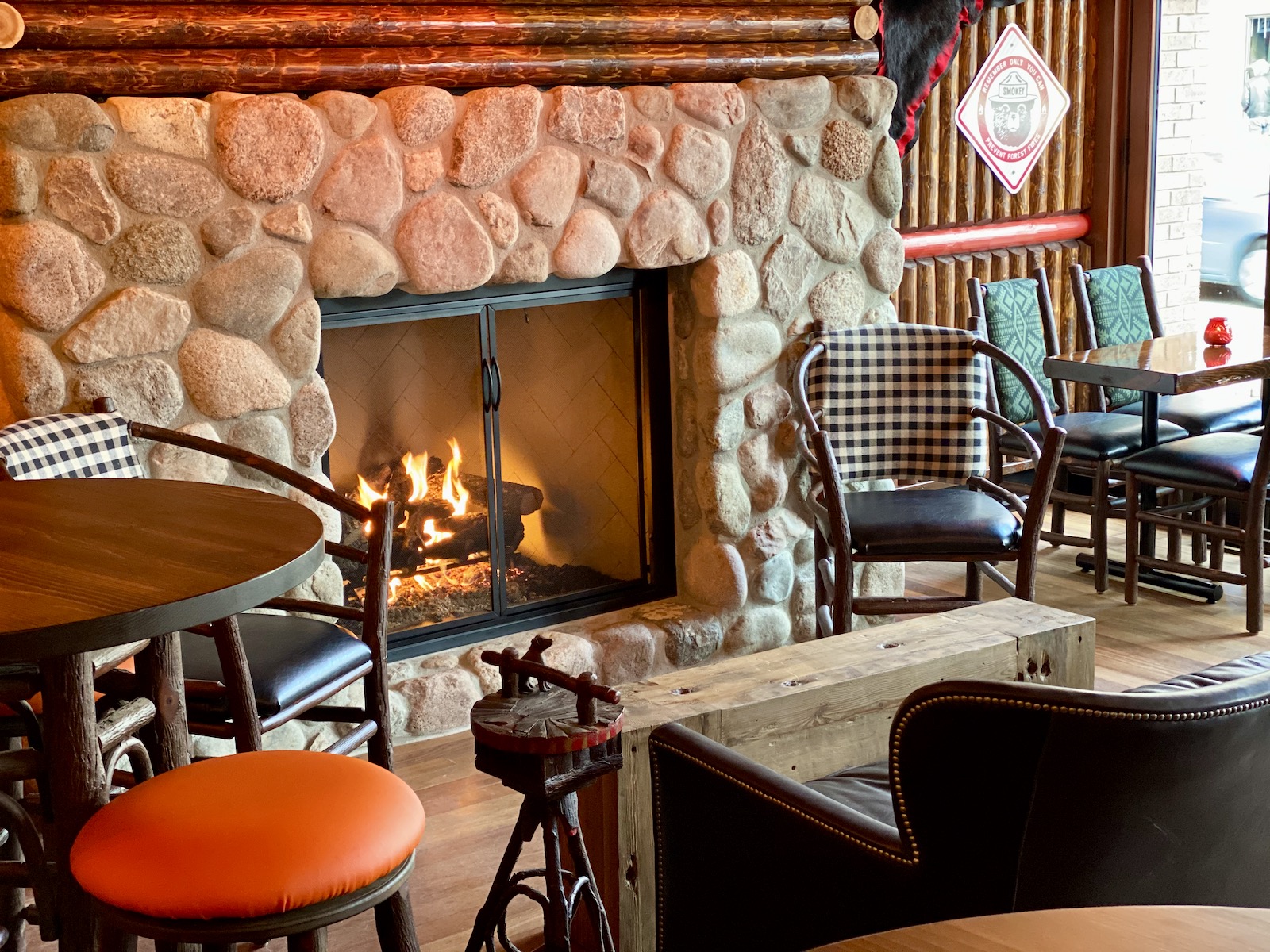 The area is presided over by a stately moose whose rack spans most of the width of the fireplace. 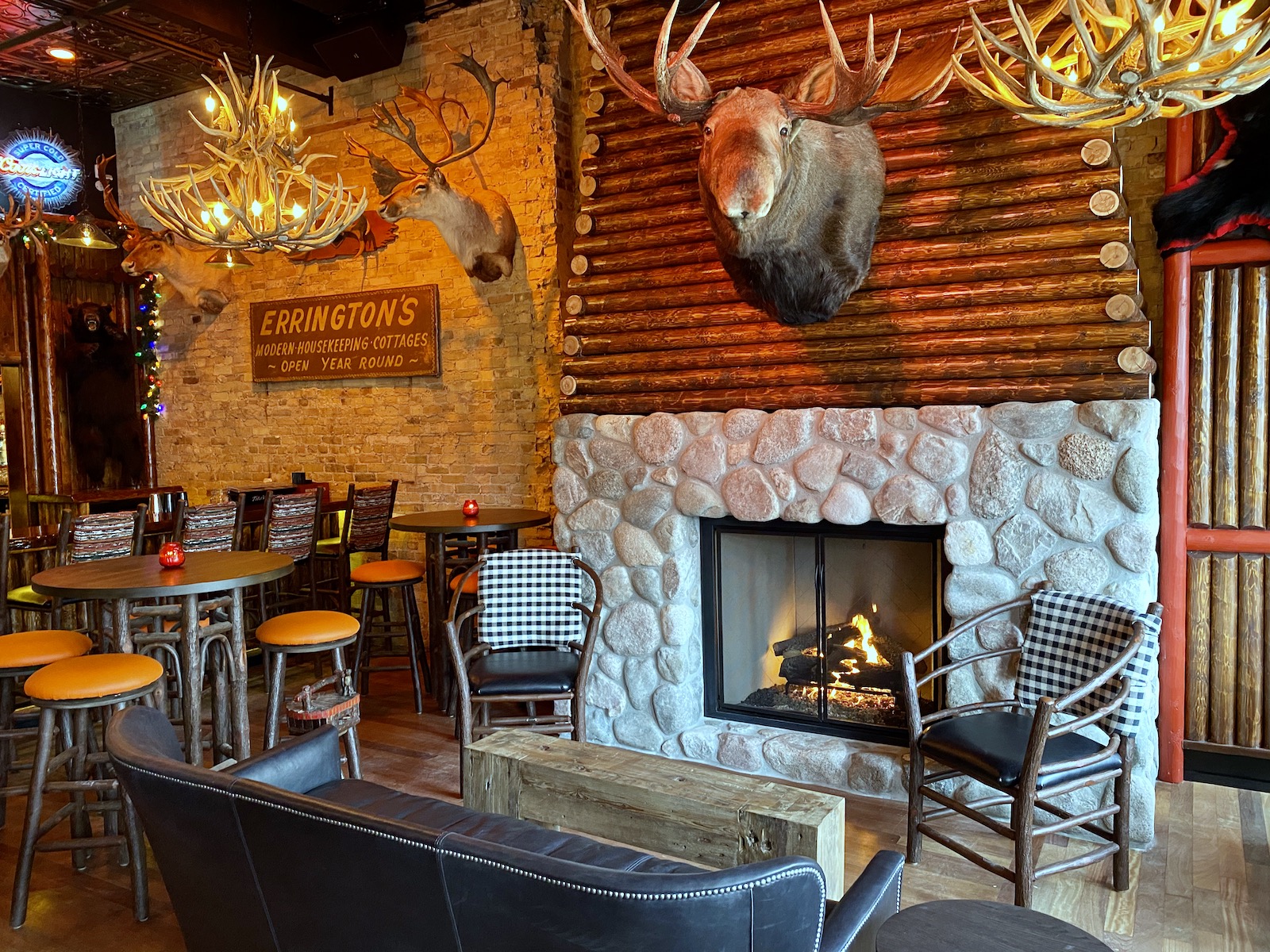 Beyond the fireplace is a well-appointed bar, sporting a raw-edge bar top and rustic wooden back bar inhabited by a bear, a deer, two raccoons, a squirrel and a couple of curious foxes. 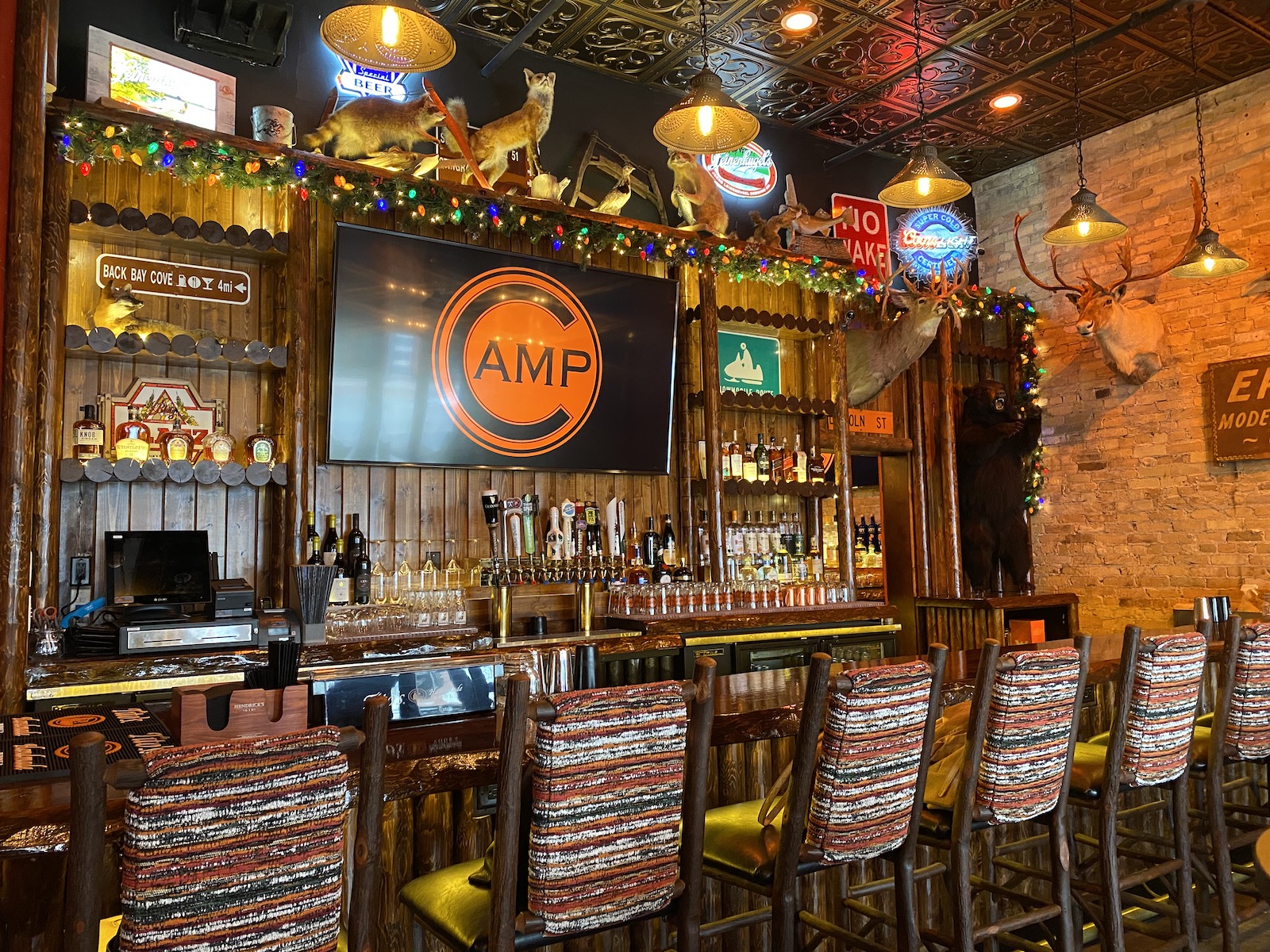 Step into the back bar area and you’ll find another impressive space featuring seating for about 150 at the lengthy bar, high-top tables and communal tables. 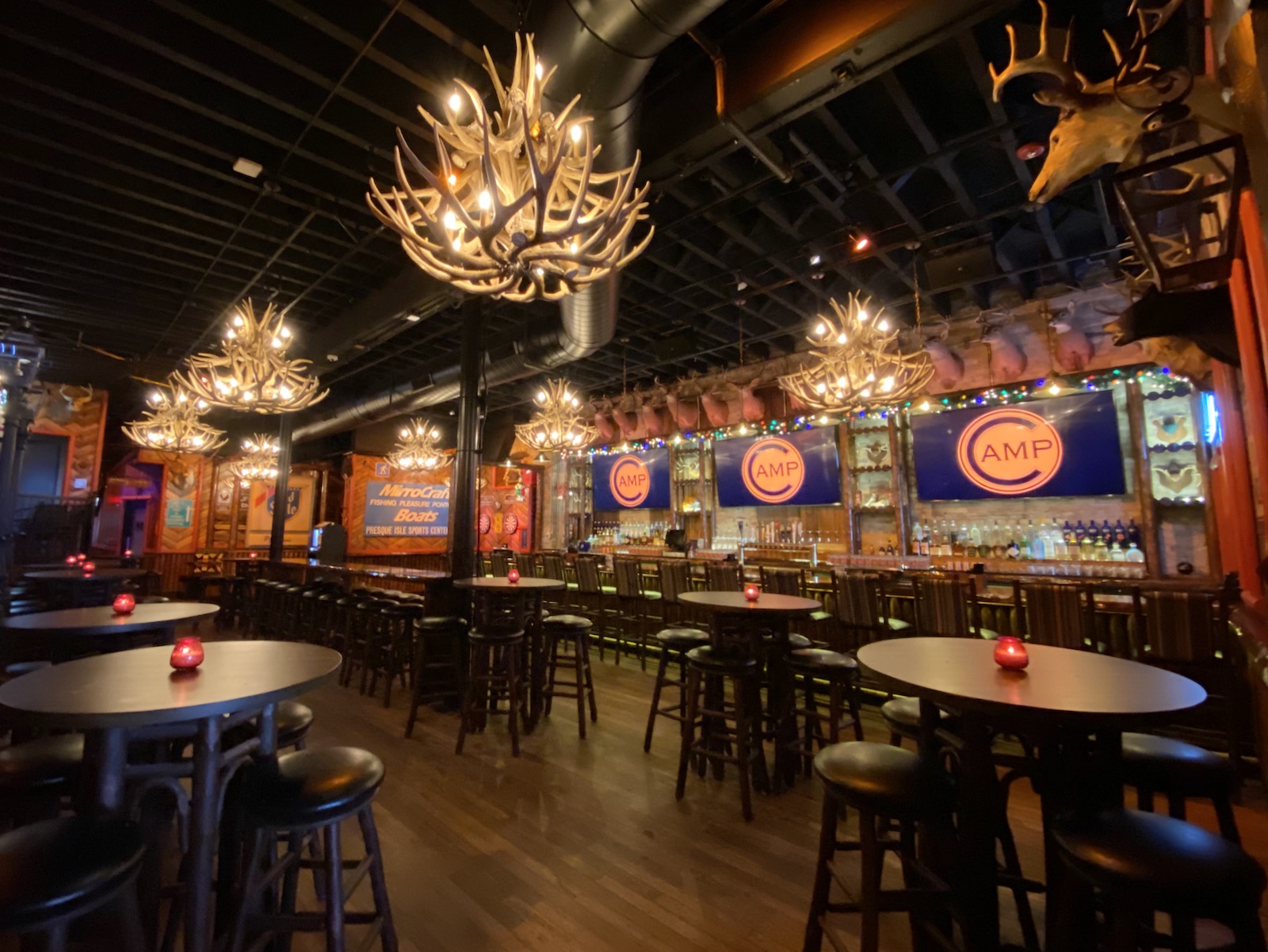 Cozy seating is available along the lofted area on the south side of the room, which is enhanced by exposed cream city brick and details like antique gas street lights, which offer a cozy flicker as well as a nod to Milwaukee’s past. 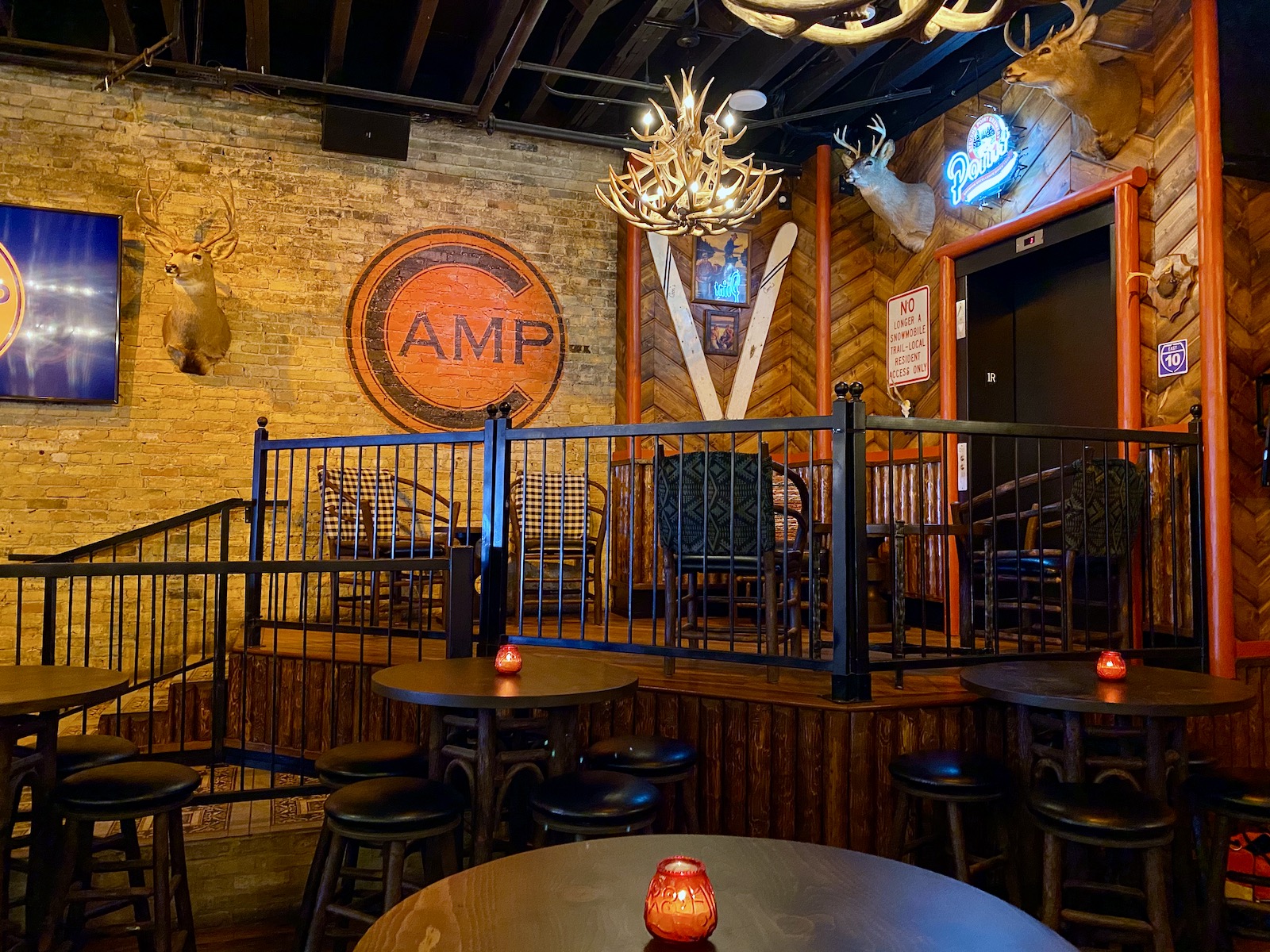 You’ll also find dart boards and seven mounted televisions (and a state of the art sound system), ensuring a good view of any sports game that happens to be featured.

The raw-edged bar features plenty of seating and a back bar overseen by even more deer (14 to be exact). 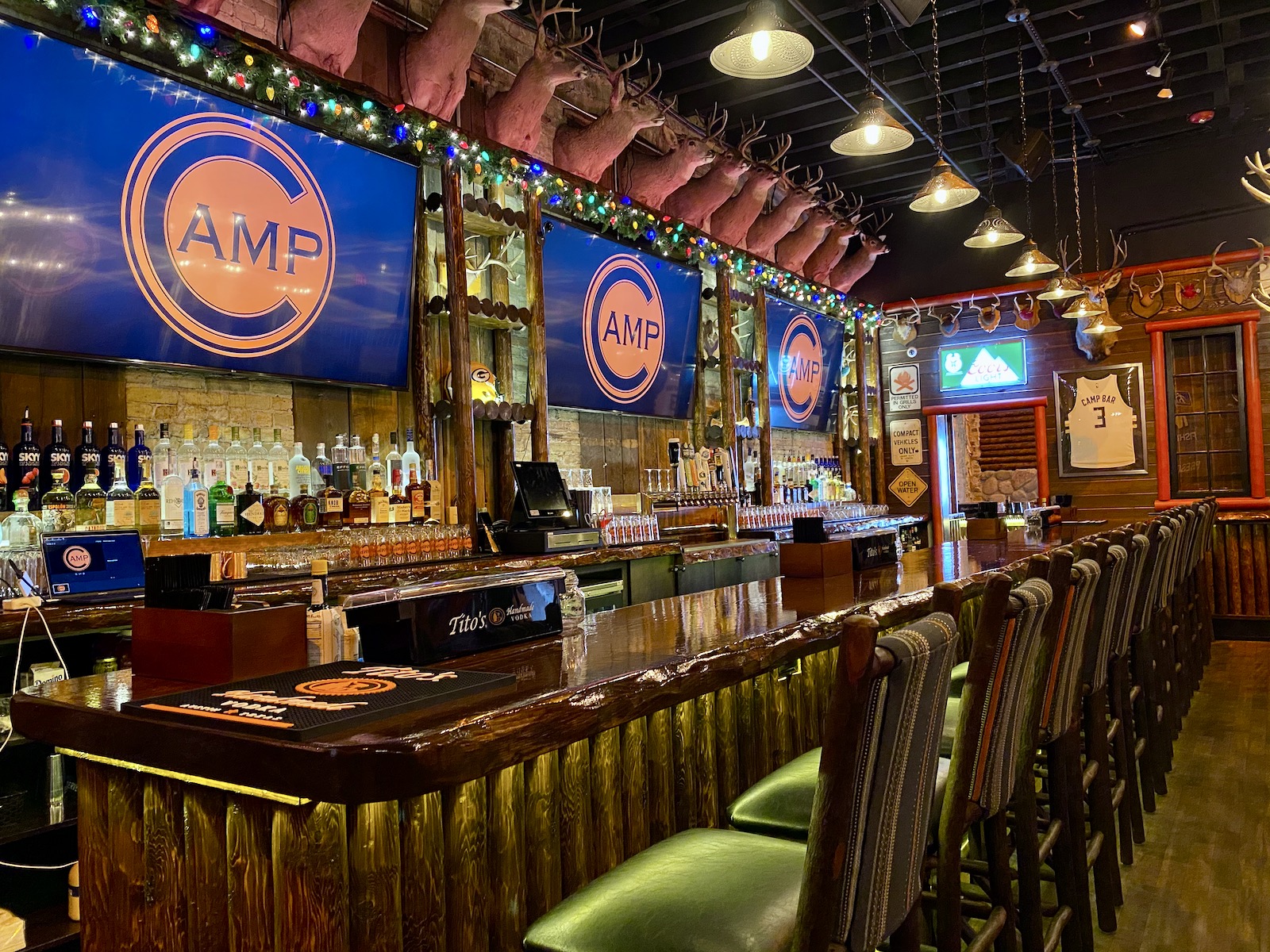 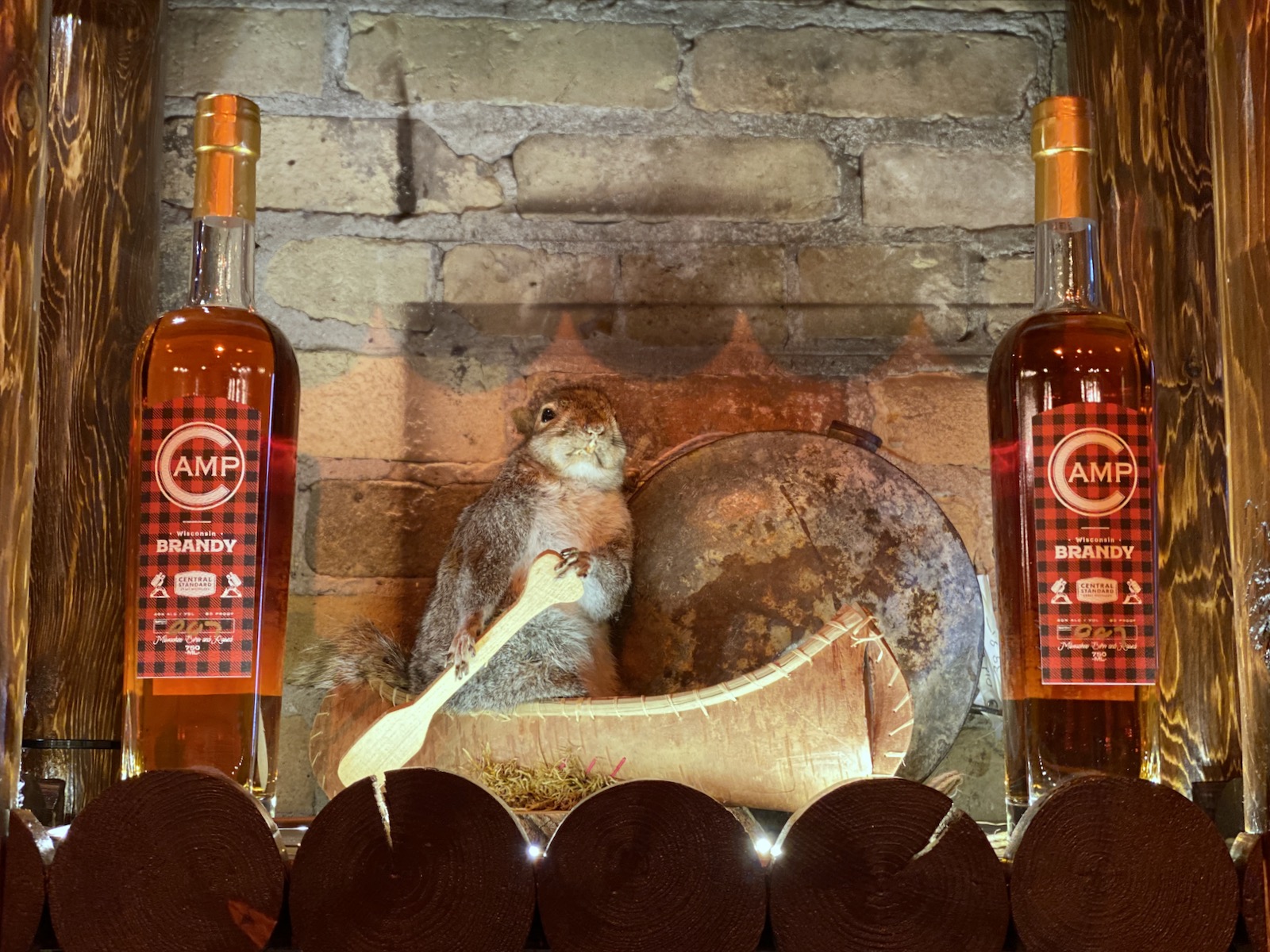 Venture farther back and you’ll find one sole booth tucked back in the corner of the space, providing a semi-private space for couples and small groups. 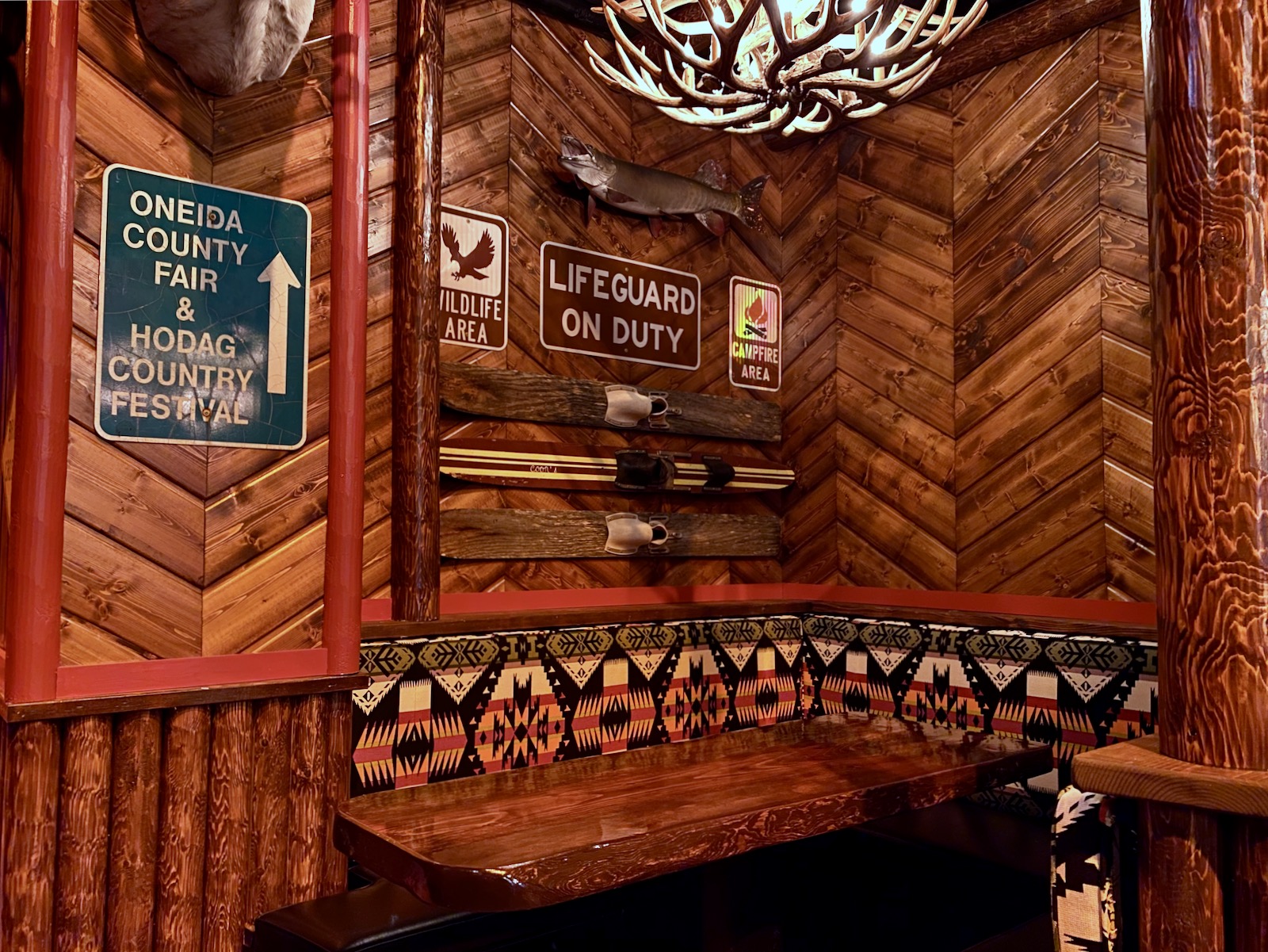 While you’re checking out the decor, you can look for another rarity, the lounging bobcat. His name is Jimmy (or Bobby, depending on who you ask). 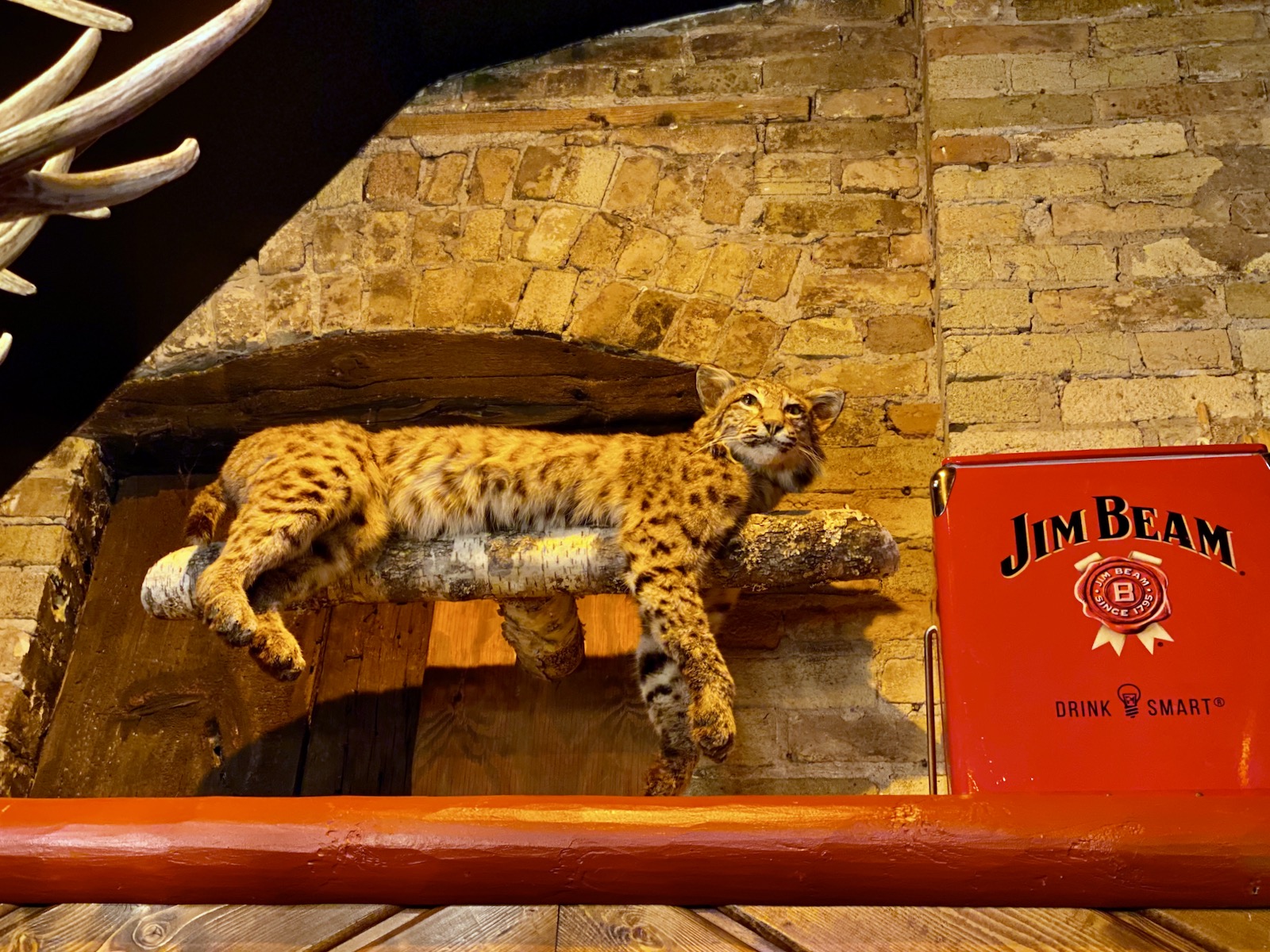 On the drink menu, Camp Bar regulars will find a slew of familiar favorites, along with a number of new offerings. The menu boasts a collection of eight old fashioneds, including new riffs like the Anejo OF with Espolon Anejo Tequila that’s muddled with grapefruit and cherries.

There’s also a selection of tap beers including quaffable domestics, microbrews, seasonal brews and a rotating tap which changes out weekly.

But guests are likely to be most excited about the bar’s wings, which are marinated, grilled and flash fried before being sauced or rubbed. The menu features seven different flavors, from parmesan garlic and Caribbean jerk to dry rub and barbecue, sweet Thai chili and Asian ginger. There’s also the Camp "Fire Wing," a selection derived from co-owner Paul Hackbarth’s signature recipe. The wings are both sauced and dusted with a secret blend of spices.

Order 'em up with a side  of Brew City Waffle fries and dipping sauces including ranch, blue cheese, barbecue, honey mustard, marinara sauce and nacho cheese. 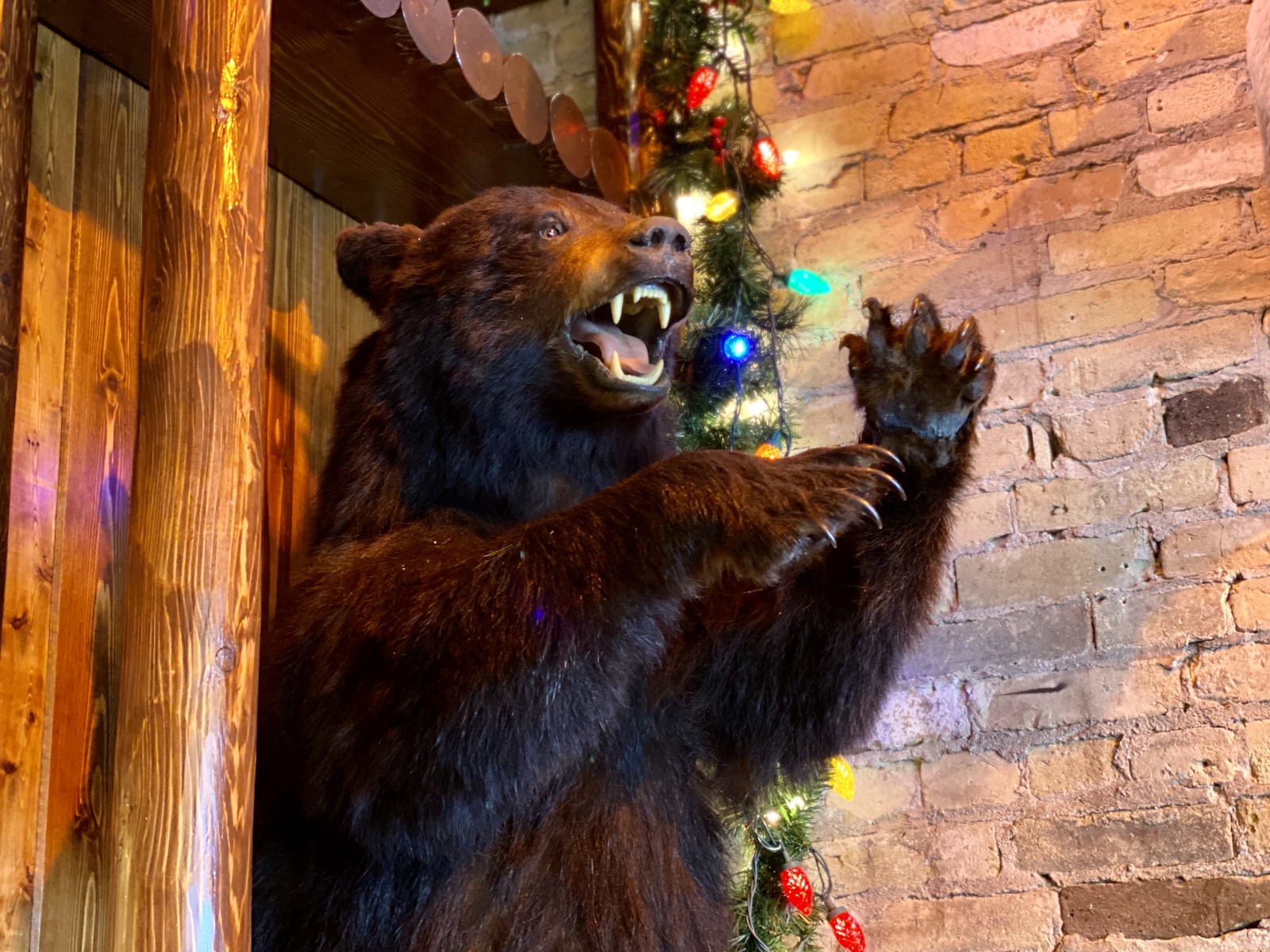 Not now, but soon

DEER CAMP is a stop during the Shamrock Shuffle (Old World Third Street) on March 7, so if you’ve got your tickets, you can experience the bar first hand during one of the city’s biggest bar crawls.

In addition, the 54th annual Shamrock Club of Wisconsin St. Patrick’s Day parade will return on Saturday, March 14, and DEER CAMP guests will have front row seats of the action.

Regular DEER CAMP guests can also look forward to the addition of trivia nights and a dart league beginning in the fall.

Due to the sheer volume of shuttles already running from locations on Old World Third Street, DEER CAMP will not offer a shuttle for Brewers games; but if you’re taking a Bucks shuttle from your local Camp Bar, the drop off point will be at DEER CAMP.