Tag along as we take a closer look at Don's Diner & Cocktails, from the stories behind the decor and inspiration behind their upscale comfort food dishes, to The Naughty Angel, the diner's retro whiskey bar.

Walk into the new Don’s Diner & Cocktails at 1102 S. 1st St. and your ears will be treated to a playlist featuring songs from the 1940s and '50s. Meanwhile, your eyes will fill with a mix of both old and new, from clean subway tile walls and modern bar stools to marble topped tables with bases reminiscent of those found in old soda shops.

"We wanted something that captured the golden era of the diner," notes Aaron Gersonde. "We also knew we wanted to pay a tribute to Milwaukee. So we married the notions of a traditional diner with a current, modern look and feel."

Look around and you’ll also find a space that pays unmistakable homage to the life and times of Gersonde’s grandfather Don, a longtime Milwaukeean whose life is laid out in black and white photographs throughout the space.

"He was young when he moved to Milwaukee with his parents from Iowa," Gersonde says. "And he grew up here. He worked at Schlitz Brewing for a while. And then he joined the Air Force."

During World War II, Don worked as navigator for a plane dubbed Naughty Angel, which made passes through the skies above France and Germany.

"He was always showing me old photos and telling me stories," says Gersonde of his grandfather, who passed away when he was 12 years old.

"One of his favorites was one about getting shot down. In the end, they needed to replace the wing of the plane. There wasn’t any time to paint it, so the plane flew for a period with an unfinished metal wing which shone in the sunlight. The plane, apparently, became known for that, since you could readily identify it in the sky." 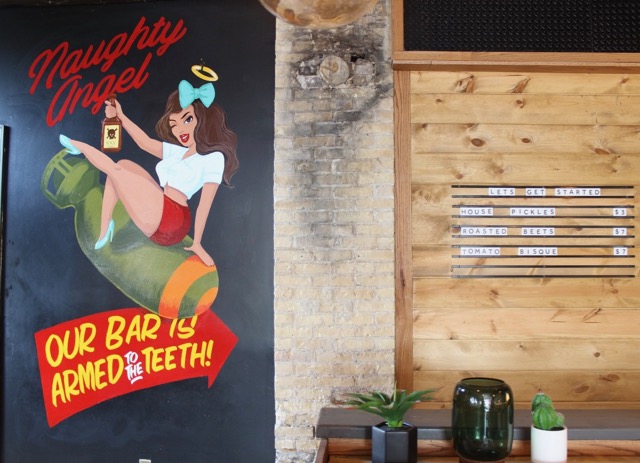 After the war ended, Don came back to Milwaukee and joined the police department, eventually working his way up to captain and heading up the police academy. Gersonde says.

"It’s been really great to revisit his life. I’ve spent hours sorting through boxes and looking at photographs, and I’ve gotten the chance to reacquaint myself with him as an adult, and it’s been really special."

Among the treasures are framed paper dollars from Italy that Don brought back from overseas (copies are framed and hung in the restrooms at the diner) along with a rare photograph of Don and his wife Philomina on the day of their wedding. 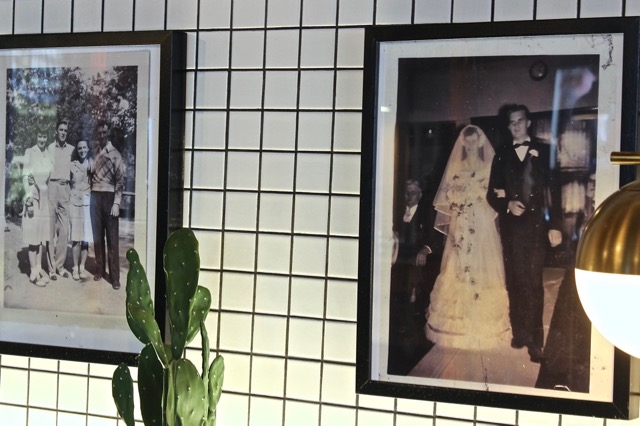 "It’s the only one that exists," says Gersonde. "Apparently the photographer for their wedding left the negatives out in the sun, so the one photo we have of their wedding was one that a friend had taken."

Don’s plane, Naughty Angel, is also the name of Don’s tucked-away back bar, which is open weekdays beginning at 5 p.m. and on Saturday and Sunday at noon (and yes, that’s explicitly to accommodate folks who might want to catch a game on the bar’s flatscreen TV). 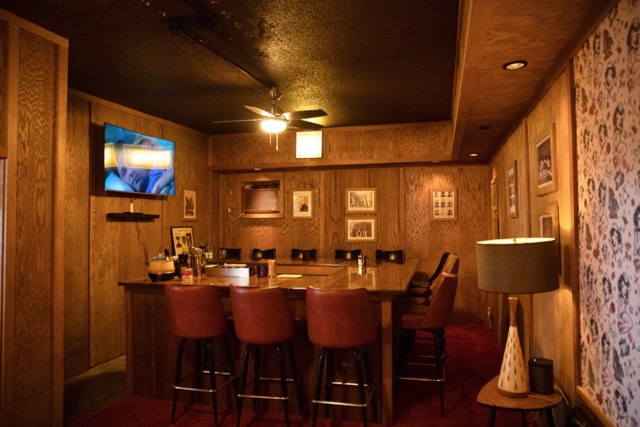 The aesthetic here is far more like your grandparents’ basement bar thank to wood-paneled walls, old school leather bar stools and wallpaper that’s straight out of the 1940s.

At the bar you’ll find a nice collection of higher end whiskeys along with any number of your grandparents’ favorite classic cocktails (the menu rotates and is posted behind the bar). And you can enjoy them while nibbling complimentary treats like little smokies or Swedish meatballs, served up from the bar’s retro Crock-Pot. 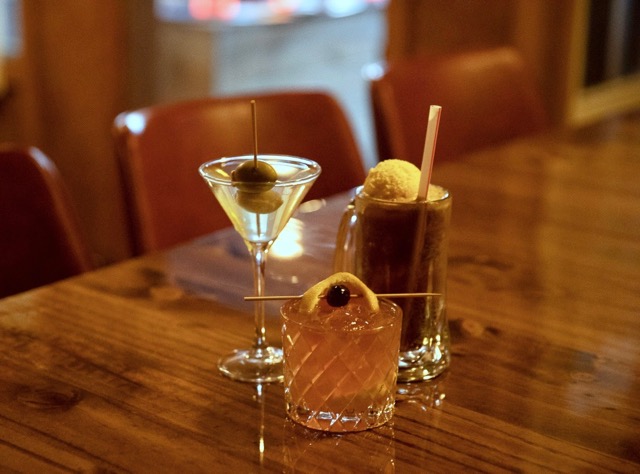 Much like the aesthetic of the space, the menu at Don’s is littered with dishes that breed comfort and familiarity.

The entire vision for this place was about recreating comfort food dishes … and just doing them a little bit better," says Culinary Director Jeff Badders. "So we sat down and talked about things our grandparents ate or things we ate as kids, and we put our own spin on them. It’s about giving people that ‘next level’ sort of a thing."

You’ll find breakfast standards like an omelet with red peppers, Swiss chard, chives, aged cheddar and bacon ($9) and a gravlax Benedict made with house-cured salmon, fennel, cucumber, poached eggs and chili dill hollandaise ($13). There are also indulgences like scrambled eggs made with creme fraiche and topped with black truffles ($12). 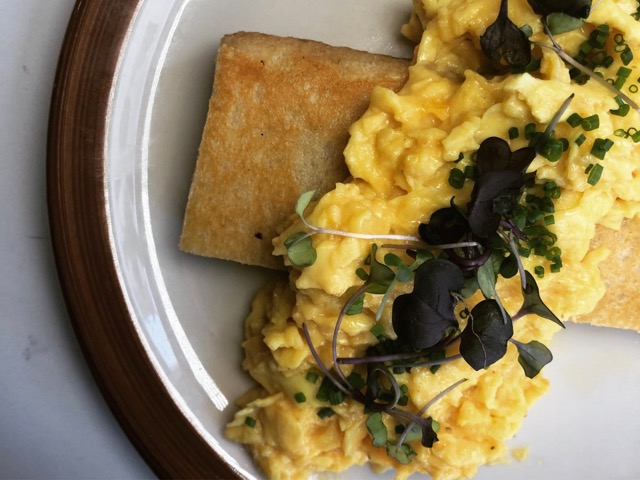 You’ll also find tall stacks of pancakes – made fluffy and tender with a combination of Mexican Sprite and buttermilk – and topped with maple syrup and orange honey butter or fresh berries or … in the case of Piggies in Blankets, filled with cooked bacon and topped with oatmeal streusel and bourbon whipped cream. 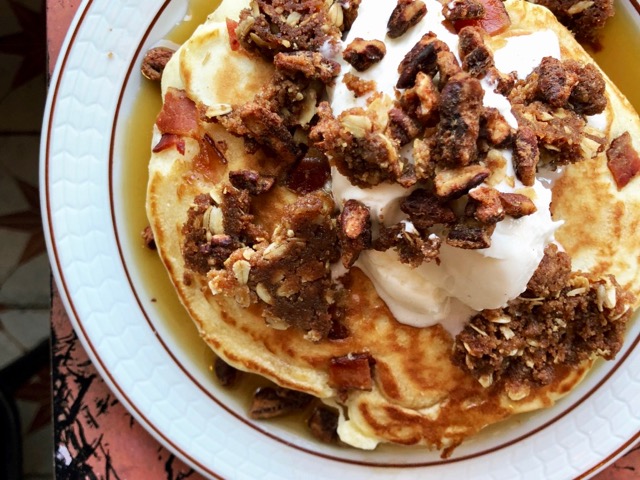 "When I was growing up, my mom always put bacon in the waffle iron, with the batter on top," says Badders. "Later on, I realized that nobody did that. But it’s delicious, and it’s a little crunchy from the bacon and streusel."

On the sandwich front, there’s a Reuben on rye with housemade sauerkraut and gruyere ($14) and a fried bologna sandwich with sundried tomato jam, American cheese, iceberg lettuce, red onions, pickles and mayo ($13). 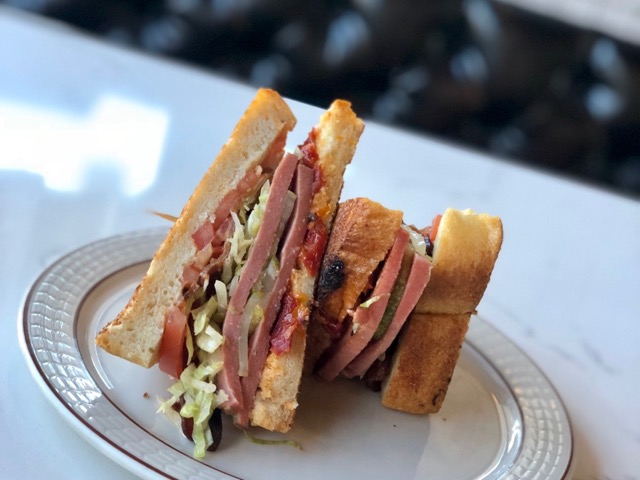 The latter was inspired by a trip to Wilensky’s, a Jewish deli in Montreal.

"It’s like an old Jewish deli with a bar and an old school soda fountain," says Badders. "They literally serve one bologna sandwich. You can get it with or without mustard. And it was unbelievable. They actually charge you extra if you don’t want the cheese."

"On top of the richness of the cheese and caramelized onions, you get a butter patty with black truffle, foie gras and chives," says Badders. "For me, it gets at the heart of the menu, which is about taking these really comforting things and stepping them up a little." 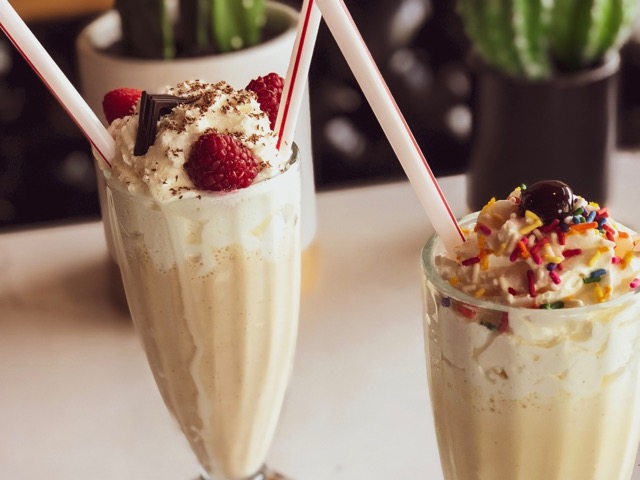 Wash that one down with a beer, wine or cocktail, including a classic Wisconsin-style old fashioned ($7). There are also boozy shakes like the This One’s For Mom featuring Cartron de Framboise, creme de cocao, raspberries and shaved chocolate ($9). There are also $5 chocolate or vanilla shakes for the kids. 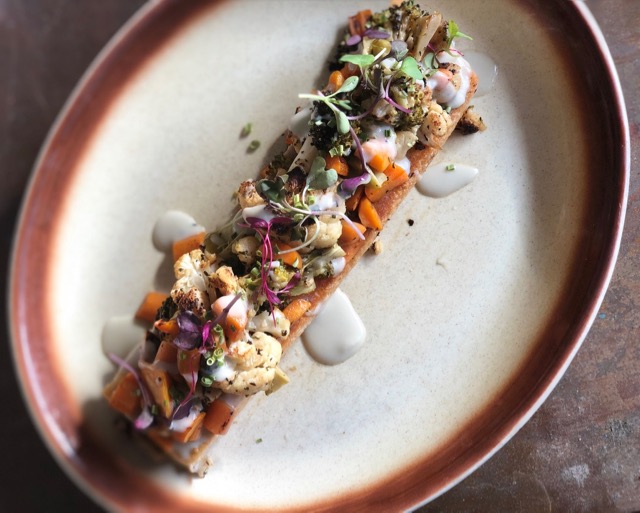 "This is a secret favorite of mine," Badders admits. "It’s a little bit unexpected in terms of the rest of the menu. But ultimately, it’s just this really nice warm open-faced vegetable sandwich."

Larger plates include lamb meatballs bathed in a mushroom truffle demi-glace and served over fresh pasta with cured egg yolk ($23) and chicken "a la pot pie," a take on the classic featuring a filling made with confited deboned chicken that’s been fried in duck fat until crisp. It’s bathed in a rich gravy with homestyle chopped vegetables and topped with crisp puff pastry ($21).

Meanwhile, panzanella curds features cubed, toasted bread that’s tossed with tomato sauce and cheese curds and broiled into a gooey comforting dish that Badders likens to "the pizza you got in middle school" ($15).

"I’m a big fan of diner steaks," says Badders. "For ours, we use a baseball cut sirloin, so it’s a little thicker and wider. That’s paired with cauliflower that’s braised in browned butter and finished with annatto and half of a twice baked potato made with Hook’s Cheddar. It’s all the components of a spud-vegetable-steak dish, but we took it a step further." 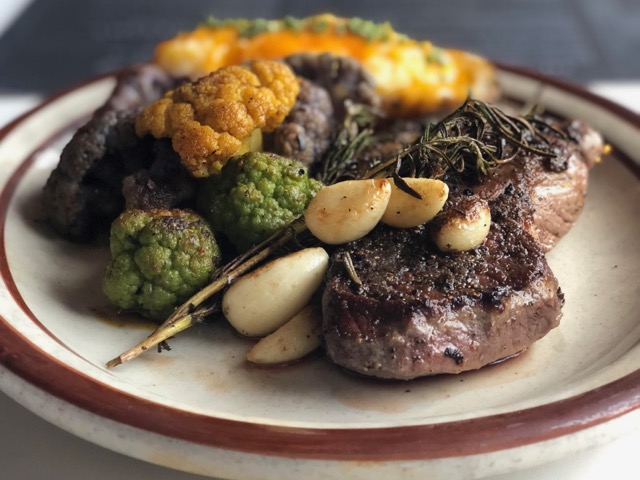 Top it all off with a rotating selection of classic desserts – from double chocolate layer cake to oatmeal cranberry moon pies – made by pastry chef Vonda Brown.