Explore. Taste. Discover. It's a sentiment that adorns the wall opposite the bar at the new Explorium Brewpub at 5300 S.76th St. just inside Southridge Mall. It's a tagline that owner Michael Doble says sums up the idea behind the new bar and restaurant.

It’s the sentiment that adorns the wall opposite the bar at the new Explorium Brewpub at 5300 S. 76th St., just inside Southridge Mall. And it’s a tagline that owner Michael Doble says sums up the idea behind the new bar and restaurant, which opens to the public on Wednesday, Jan. 25. 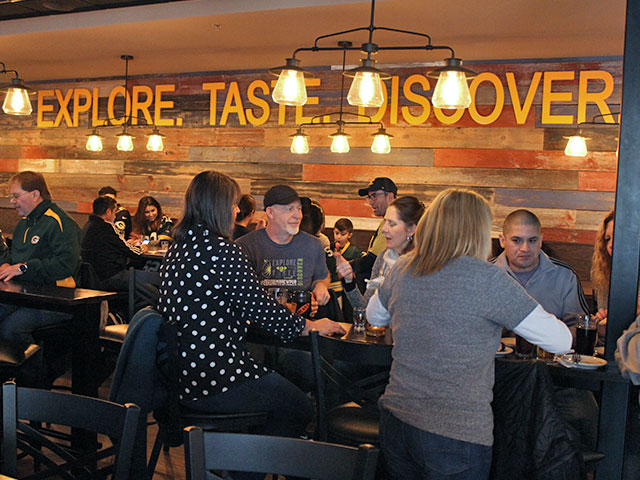 Doble says he originally hoped to open the new brewpub just before Thanksgiving, but after sitting down with contractors, he realized they needed more time.

"We relaxed the schedule to get the bulk of things done before Christmas and prepare for a January opening. It really allowed us to pull things together and be prepared in a more organized fashion."

Doble took the added time to hire an impressive crew, including Bruce Evans, former culinary instructor at MATC, as his general manager. The kitchen is headed up by Chef Nick Scheeler, formerly of the Packing House, who also happens to be an accomplished brewer.

"It makes him perfect for the role," notes Doble, "He brought a great deal to our menu, which focuses on food that pairs exceptionally well with beer."

Like many modern restaurants, Explorium utilizes colorful repurposed barn wood as an accent or the space, which also contains painted quotes and artwork depicting maps and other "explorer-themed" images. 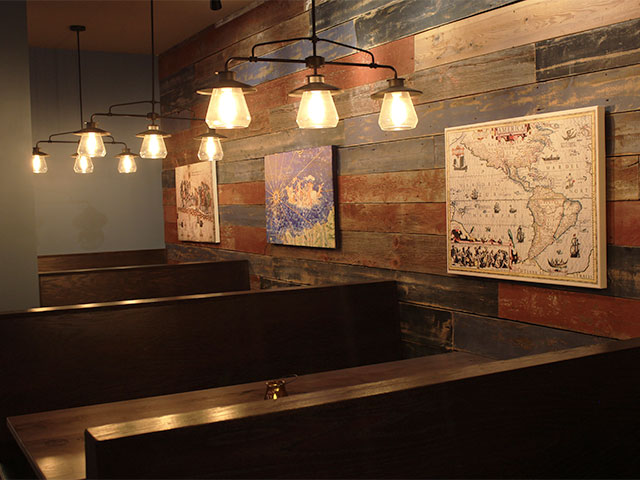 The main dining room, which is dappled with four-top tables and booths, features a bird's eye view of the 10-barrel brewing operation. 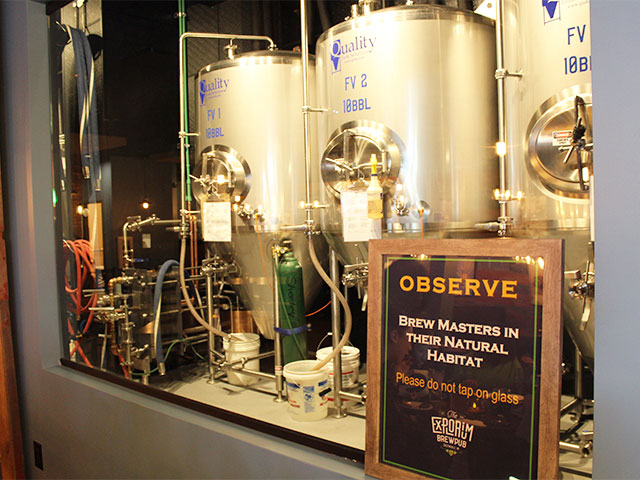 Meanwhile, the bar offers up a variety of seating options including barside stools, "Buddy tables" (drink rails with seating) and high-top banquettes. Bar seating closer to the kitchen offers up a view of restaurant’s Woodstone oven, which will produce a variety of pizzas, hearth bread and freshly baked Milwaukee Pretzel Company pretzels. 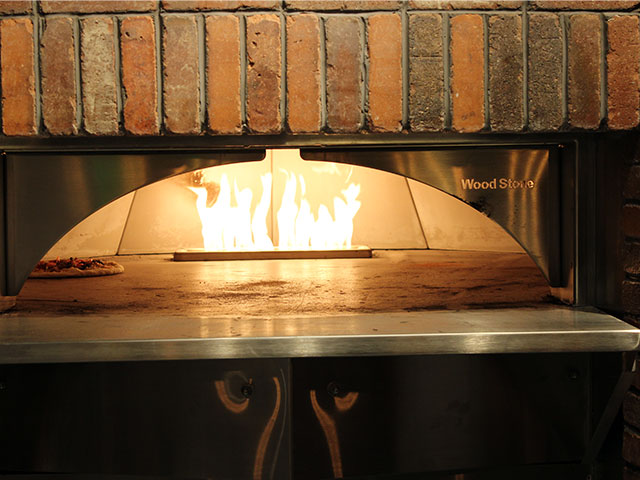 A lounge area to the left of the bar comes complete with a gas fireplace and humidor containing a collection of cigars which can be purchased and smoked out on the Explorium patio. The patio space also features an outdoor bar and fire-pit along with a dining area. 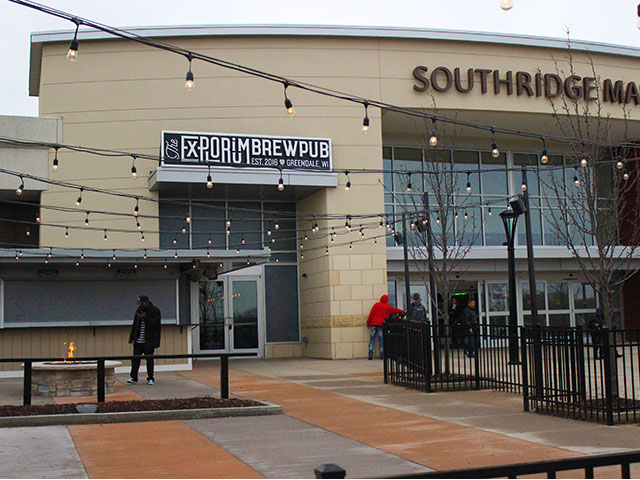 The bar, which sports 24 taps, is slated to feature 16 Explorium brews, along with eight additional selections, primarily from local breweries. But to start, Doble says the pub will begin with four core selections – all named for explorers – including Sutter’s Secret Golden Ale, Doc Rae Scotch Ale, Captain Kid’s Lost IPA and Livingstone’s Porter, along with a nice range of beer from mostly local breweries, including Brenner, Enlightened and Third Space Brewing.

Beer will be available by the glass, as well as for purchase in both 16- and 32-ounce growlers and 32-ounce sealed crowler cans. 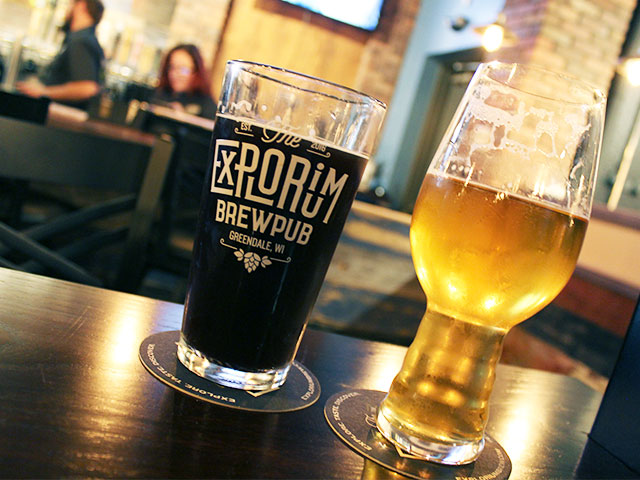 The full bar will also feature a small list of about eight cocktails, four red wines and two whites on tap, along with a nice selection of bourbons and whiskeys.

Highlights among starters include cheese curds that are marinated in hop-infused oil with fresh herbs, lemon zest and pepper ($8) and meatless chicken wings made with Parisian style gnocchi dough that’s fried and tossed with your choice of sauces ($13).

Burgers, which include options made with Black Angus beef, turkey, bison and black beans, also include a unique offering called "The Bomb," featuring a beef patty topped with horseradish sauce, bacon, cheddar, provolone and Livingstone Porter caramelized onions that’s wrapped in pizza dough and baked ($13). Sides include fries, cheddar mashed potatoes or beer chips, along with upgrades including soup, salad and truffled fries ($2/3). 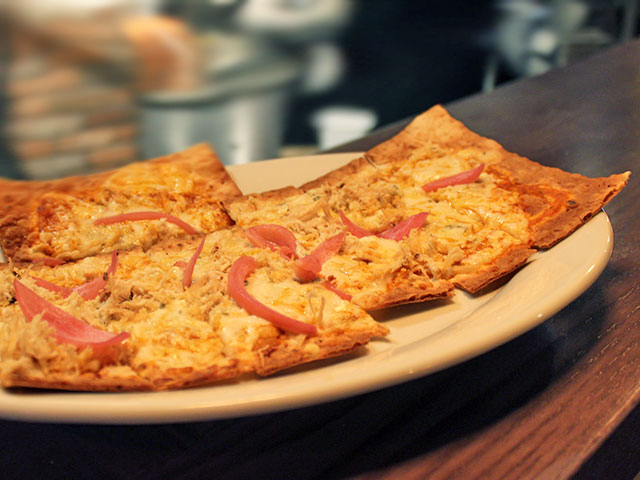 Explorium’s Friday night fish fry will feature a fresh, seasonal Great Lakes procured fish like trout, walleye, perch or Northern pike. The fish will be fried in Sutter’s Golden Ale batter and served with apple slaw, tartar sauce, rye bread and a choice of fries or potato pancakes for $14.

Doble says all of his front-end staff come to the table with a good understanding of craft beer, as well as the food menu. They’ve also been trained to make recommendations based on diners’ dietary restrictions and allergies. The chefs are also in the process of developing a reduced gluten and dairy free menu to better accommodate diners with dietary restrictions.

After all, according to Doble, Explorium is about creating a unique space that draws people back, time and time again.

"We make our own beer. We have a broad range American style menu which features everything from burgers to chops and steaks. Our hope is that people appreciate that we do things from scratch. And we’d love it if they came back time and time again."