Before it calls "action!" this weekend, however, we got to tour around the eight-screen cineplex and see what makes Movie Tavern by Marcus in Brookfield Square Mall new.

When we took an early peek in September around the new Movie Tavern by Marcus opening inside Brookfield Square Mall, it was mostly a blank slate, still well under construction and requiring a lot of imagination. Just over a month later, the new theater and dining concept is now a fully finished reality and the only blank slates are the movie screens themselves, ready to roll film on the cinema's opening day on Friday, Oct. 11.

Before it calls "action!" this weekend, however, we got to tour around the eight-screen cineplex and see what makes Movie Tavern new. 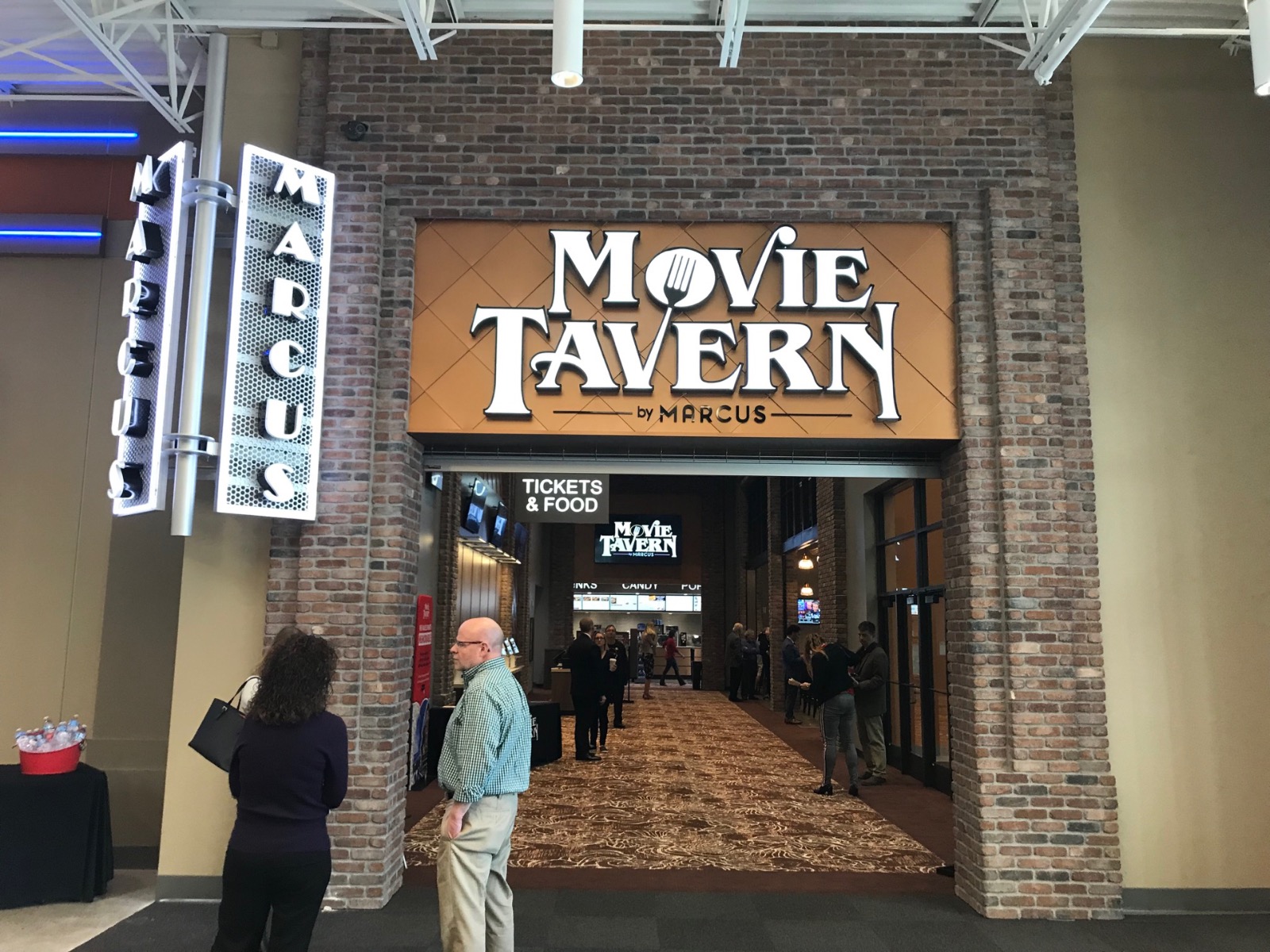 The new Brookfield Square movie theater, found at 175 S. Moorland Rd. on the south end of the mall right next to the recently opened WhirlyBall, marks the first Wisconsin location – and the first in the entire Midwest – for Movie Tavern, the cinema eatery brand recently acquired by the Marcus Corporation in February this year.

The key difference between Movie Tavern and Marcus Theatres' fleet of other dining options – including the BistroPlex dinner theater and Big Screen Bistro concepts found inside several of its locations throughout the area – is the style of food service.

Unlike some of the more rigid and separated models Marcus employs  elsewhere, the Movie Tavern offers multiple ways for customers to order food – whether it's simply classic movie concessions like popcorn and soda or something more sophisticated like a burger and a beer – ranging from placing one's order at one of the ticket kiosks in the front hallway, the Tavern bar space, the food and drink center against the northern wall of the theater, or via an app on a customer's phone.

The food is then delivered to customers, whether they're sitting at the bar waiting for their movie (or simply watching a game or relaxing after a hard day shopping) or they're sitting in one of the actual movie auditoriums. Food, and ease of access to it, is the key feature at Movie Tavern. 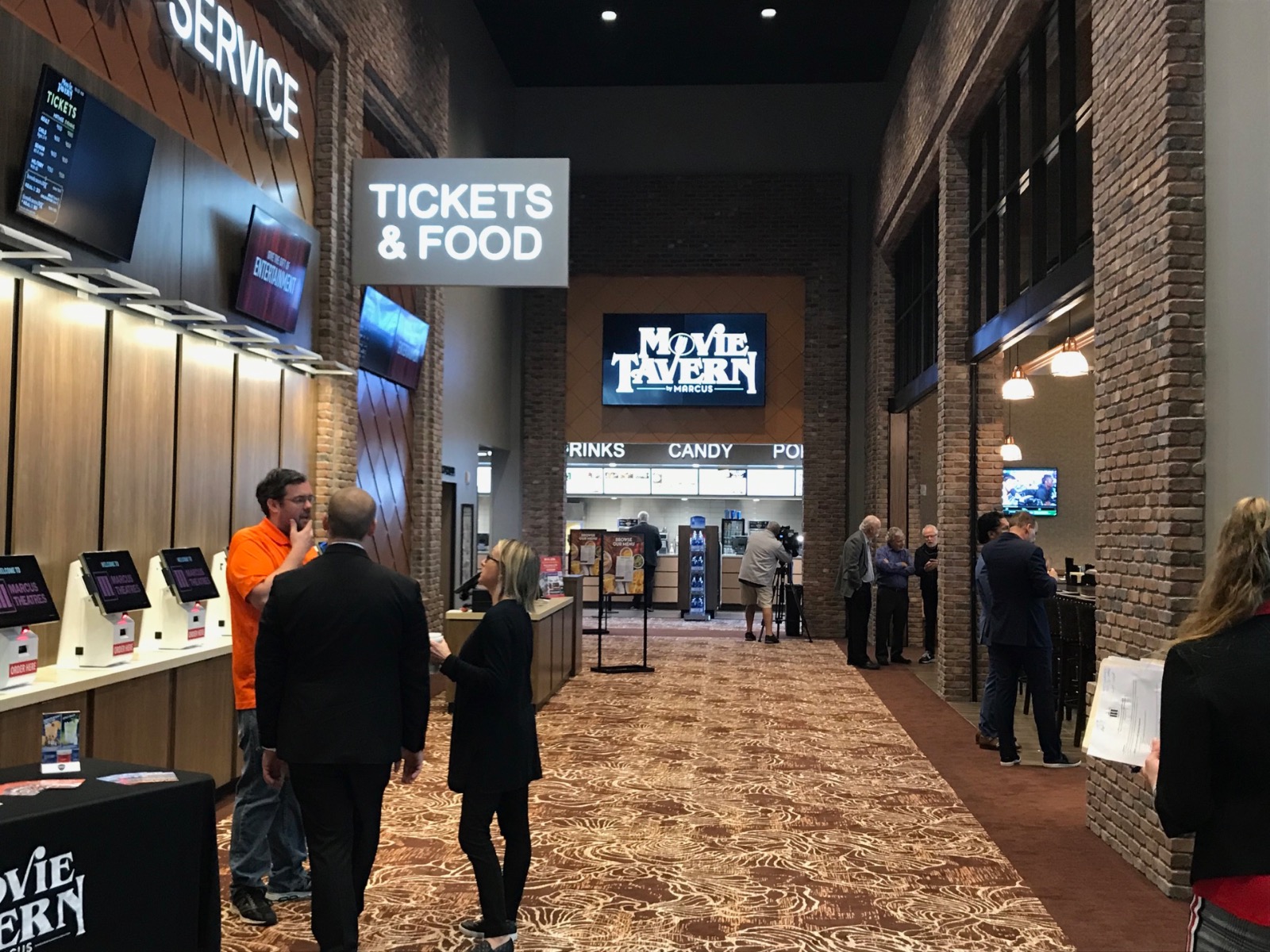 However, there are obviously aesthetic differences between Marcus' other theaters and this new Movie Tavern. Warm wood tones and brick accents make up much of the design in the new theater, creating a more rustic vibe inside the space. The lobby area is small but very open as well, namely between the ticket kiosk area and the tavern part of the Movie Tavern location. 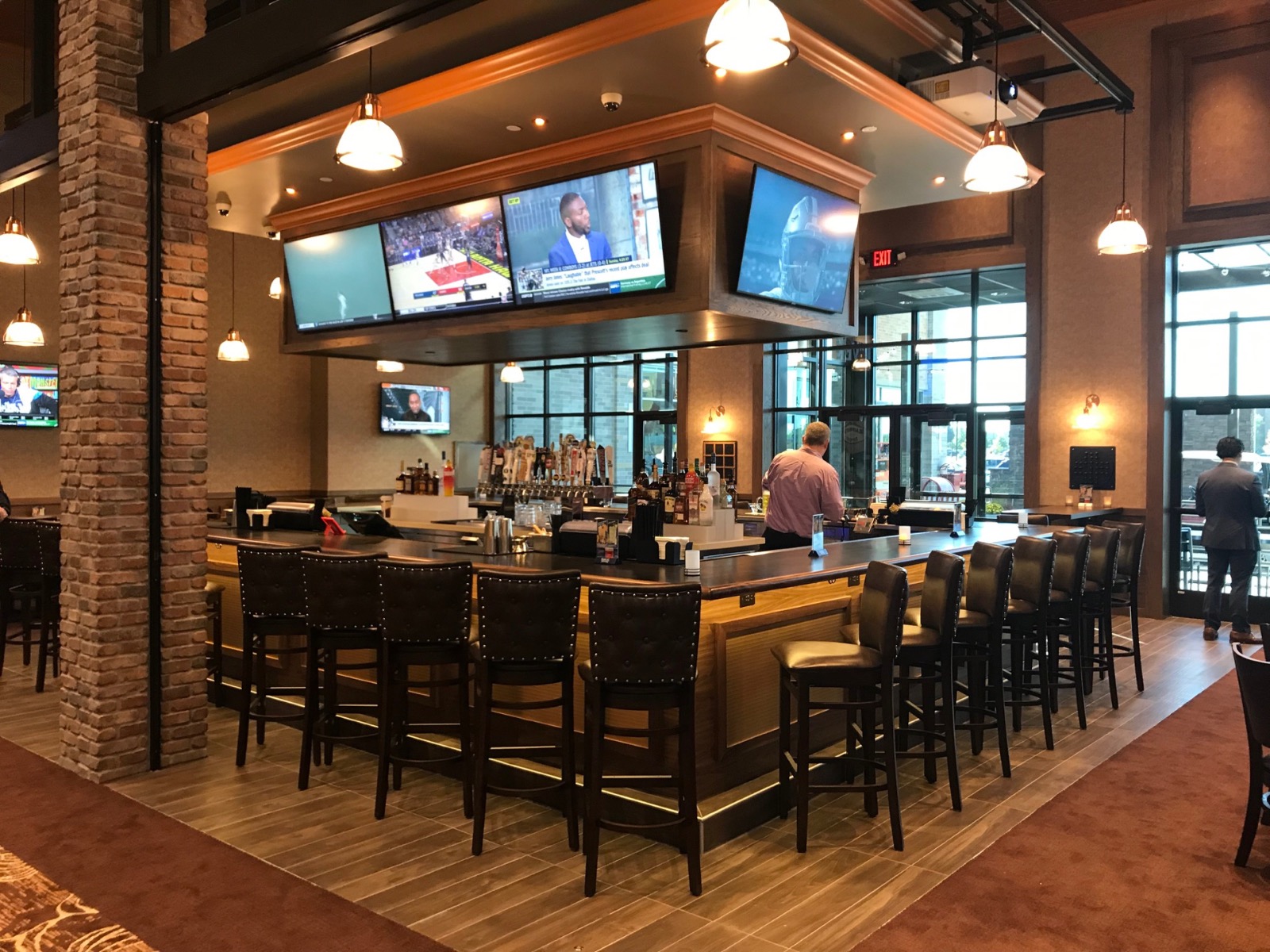 The Tavern portion of the theater is open to anyone, whether they are seeing a movie or not, and features an island bar with ample seating and numerous TVs – including a 16-foot projection screen – scattered around the space for watching the day's big sporting events. For those who prefer their own games, however, mounted on the walls by the tables off to the side of the island bar in The Tavern are some fun and easy bar activities to play, including a Tic-Tac-Toe set, peg solitaire and a jumbo-sized Scrabble board. There's also a small outdoor deck area for relaxing and dining during Wisconsin's warmer days. 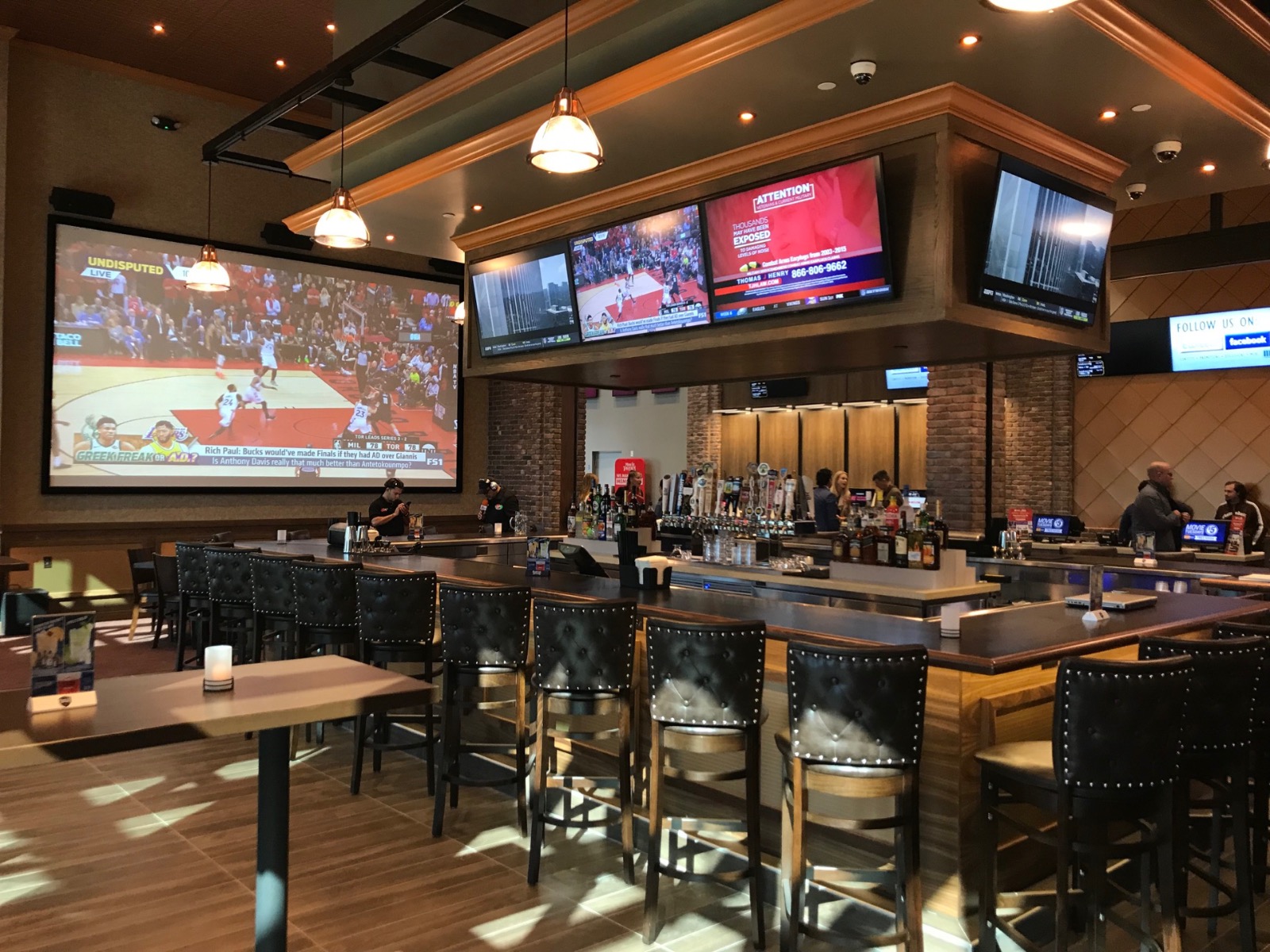 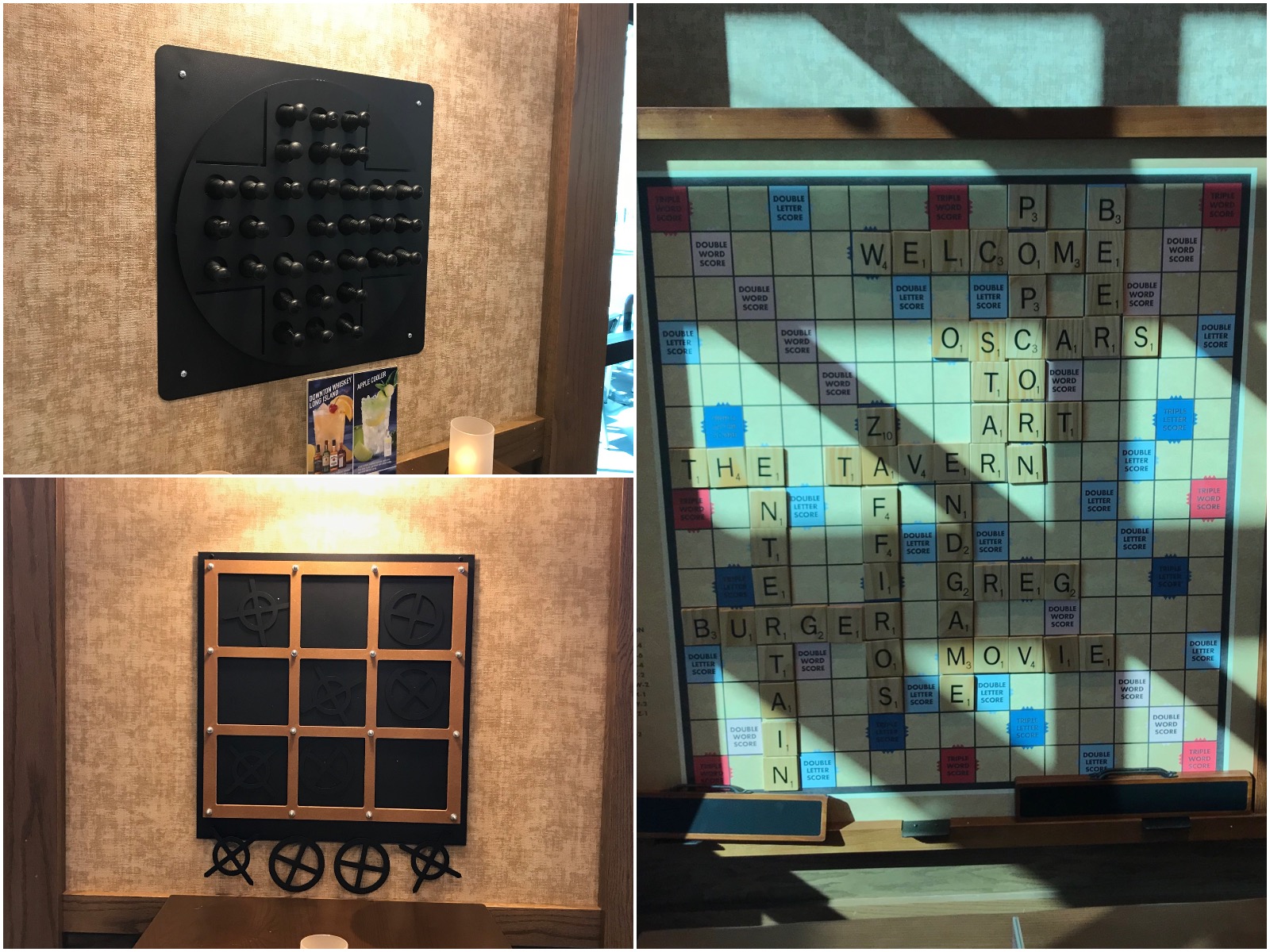 The Tavern will feature the theater's complete food and drink menu, the latter including some of alcoholic canned seltzers, Marcus Theatres' popular featured cocktails – often based around the latest big blockbuster – as well as several brews in cans as well as on tap, including domestic macros like Miller Lite and Bud Light along with craft options like Spotted Cow, Lakefront Brewery, Milwaukee Brewing Company and more. 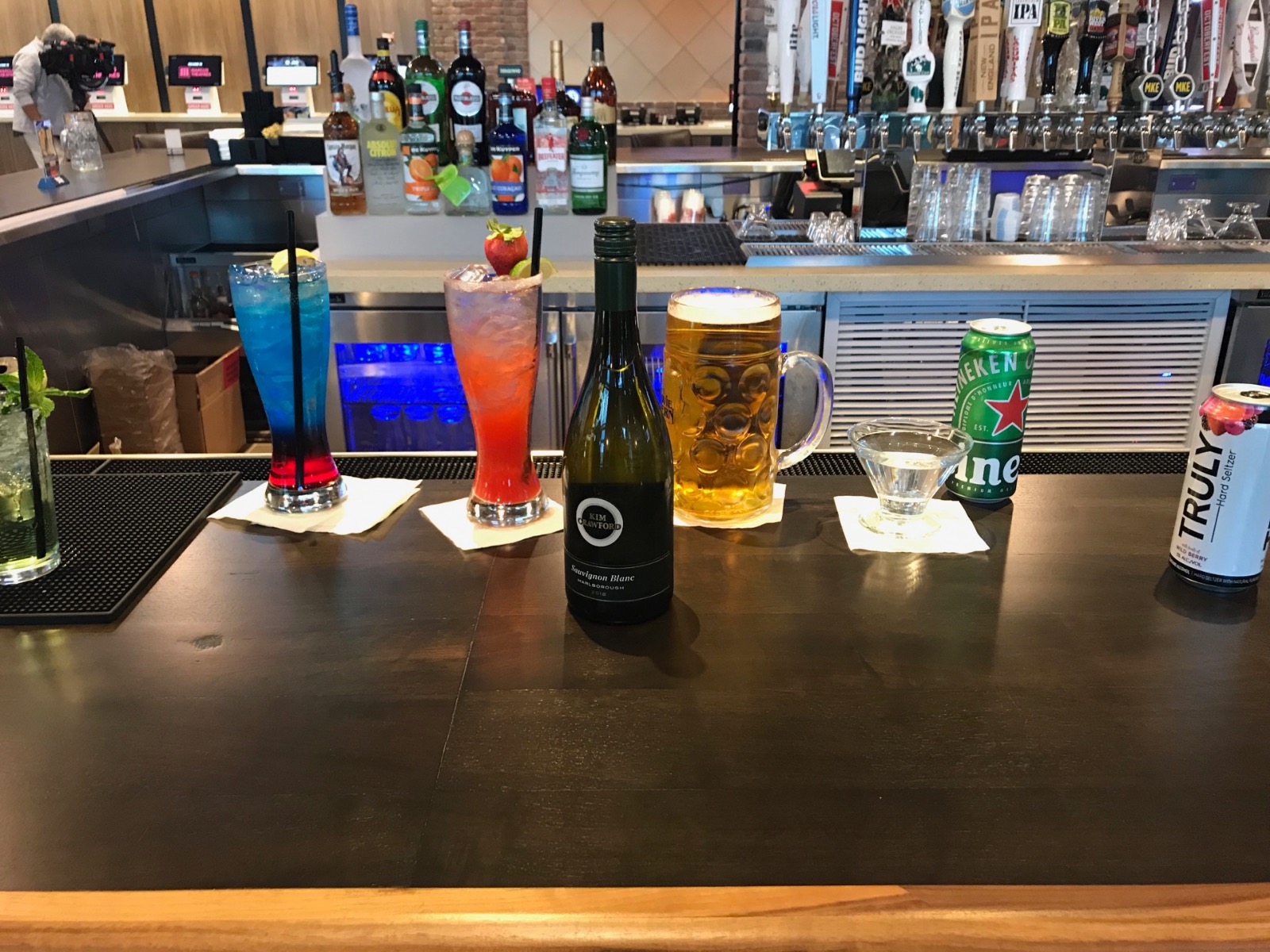 The Tavern itself also features one of the new concepts brought to the table by the Movie Tavern brand: the tankard program. Essentially a mug club at the movie theater, customers can buy a 42-ounce glass mug of a tap beer of their choosing, take it home and then bring it back to the theater for discounted refills. The first tankard purchase is $25, while refills in future visits cost between $12-14. 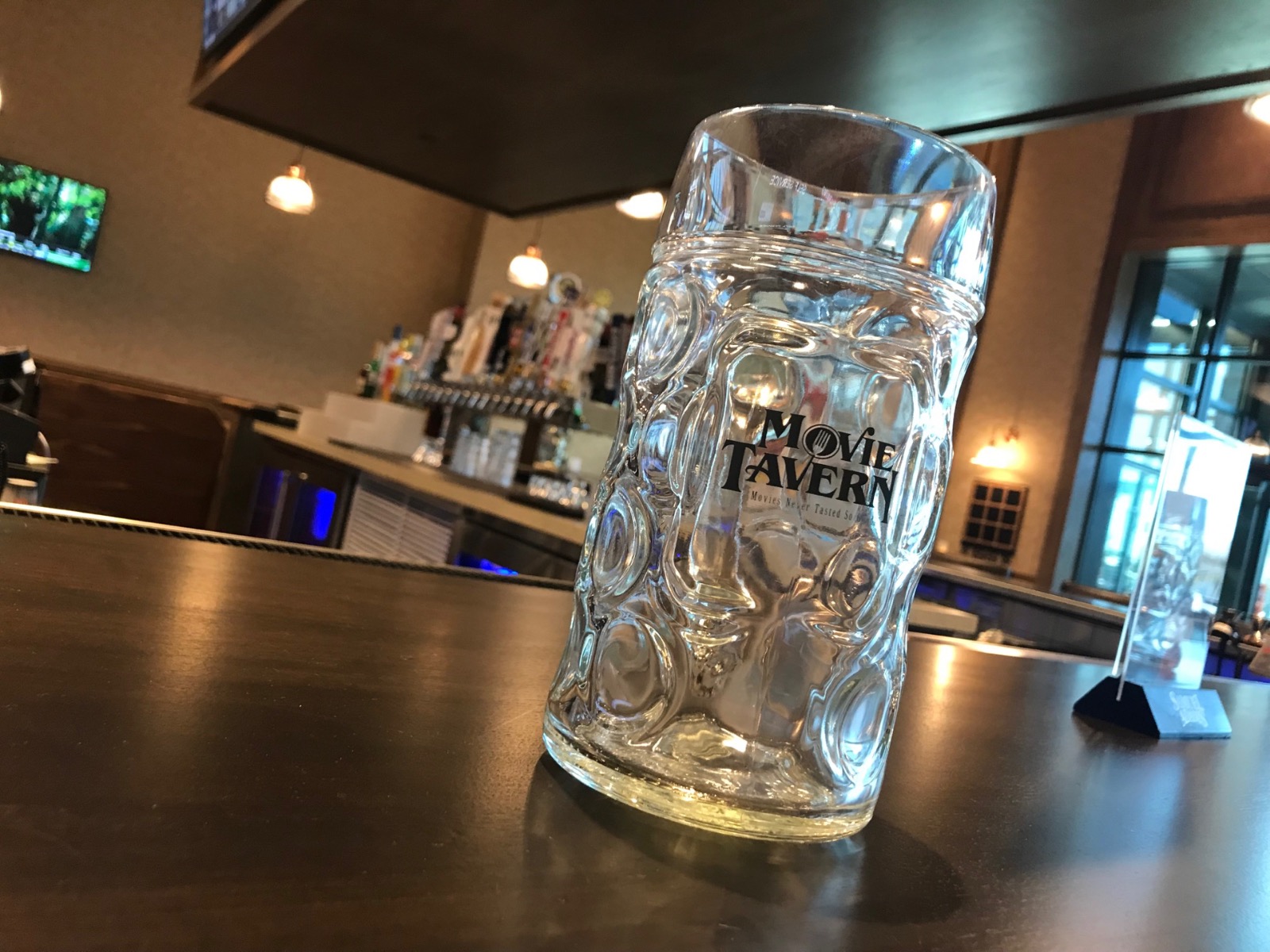 For those wanting to enjoy Movie Tavern's menu but want to skip the lounge and claim their seats in the auditorium before the opening credits roll, the new theater also features a food and drink center, a more traditional vending stand that includes a self-serve soda fountain area and all of the more traditional movie theater snacks while at the same time offering the full food menu and canned alcoholic beverages that can be delivered to your seat inside the auditorium. So one can eat at the Tavern lounge, or one can order from one of the locale's many interaction points – the kiosk, the concession stand, the Tavern or via the phone app – and have their dishes delivered to their seat. 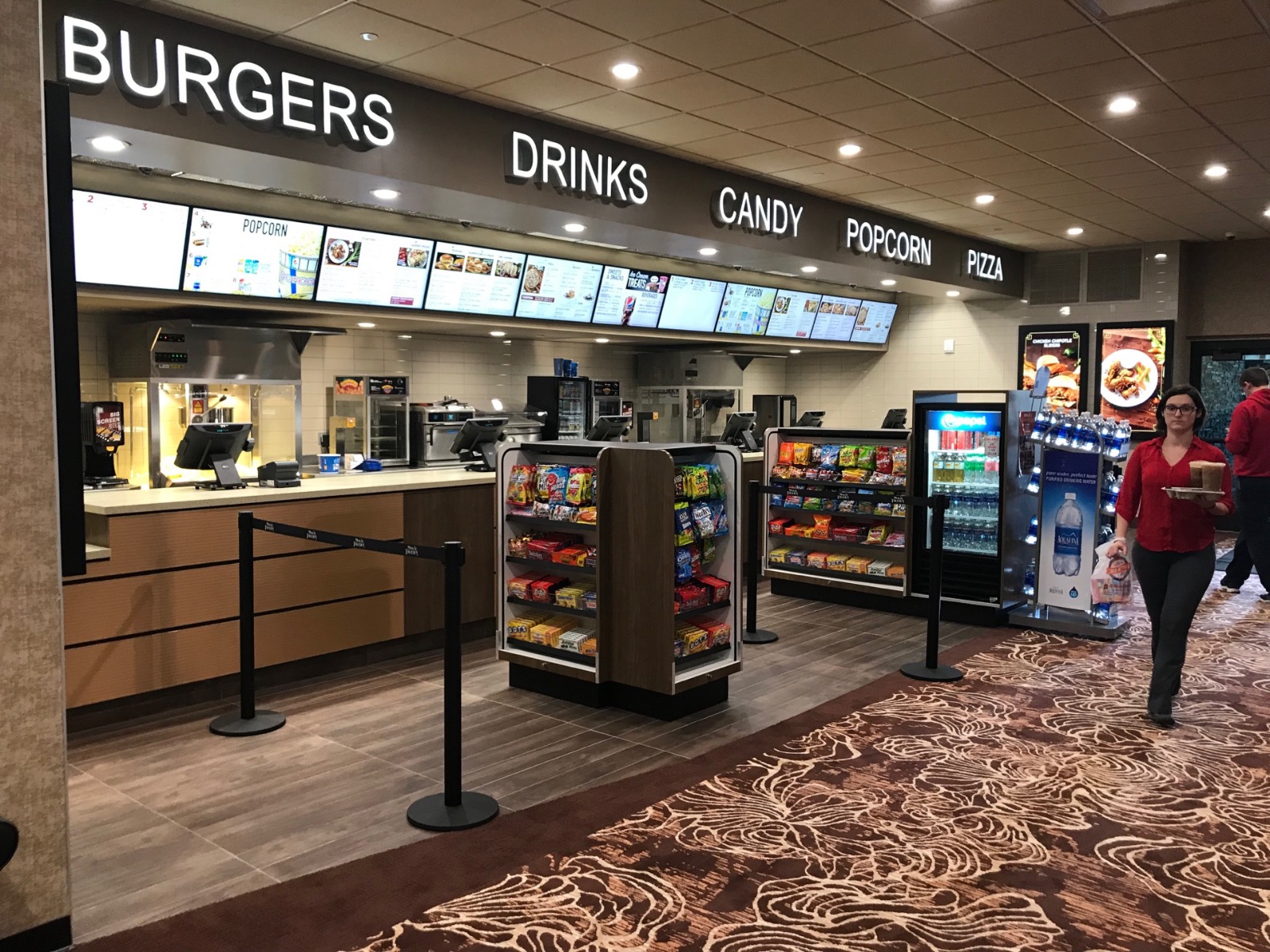 As for the food itself, the menu includes a combination of Movie Tavern and Marcus Theaters options, ranging from appetizers like chicken wings, General Tso's cauliflower bites and Movie Tavern's popular game day platter which features a bar-approved trio of three mini-cheeseburgers, chicken wings and seasoned fries with cheese sauce and bacon. The menu also includes a familiar lineup of Marcus' popular smash burgers, sandwiches, wraps and Zaffiro's pizza along with a selection of chef-inspired entrees – like an Asian beef rice bowl or Teriyaki steak and shrimp – an all-day breakfast menu and garden picks, like the roasted salmon super salad, for those eyeing something a little lighter or health-conscious for supper. 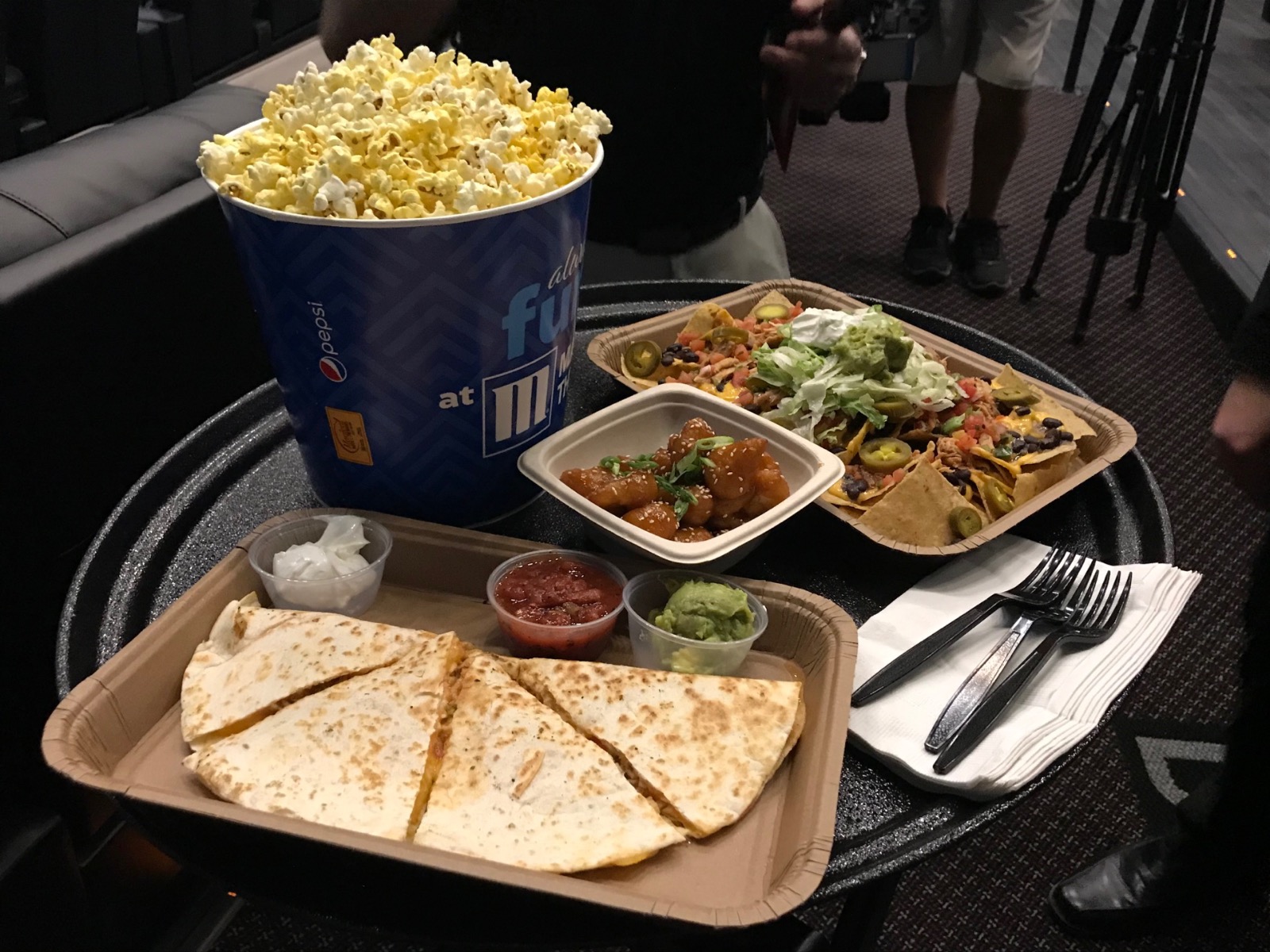 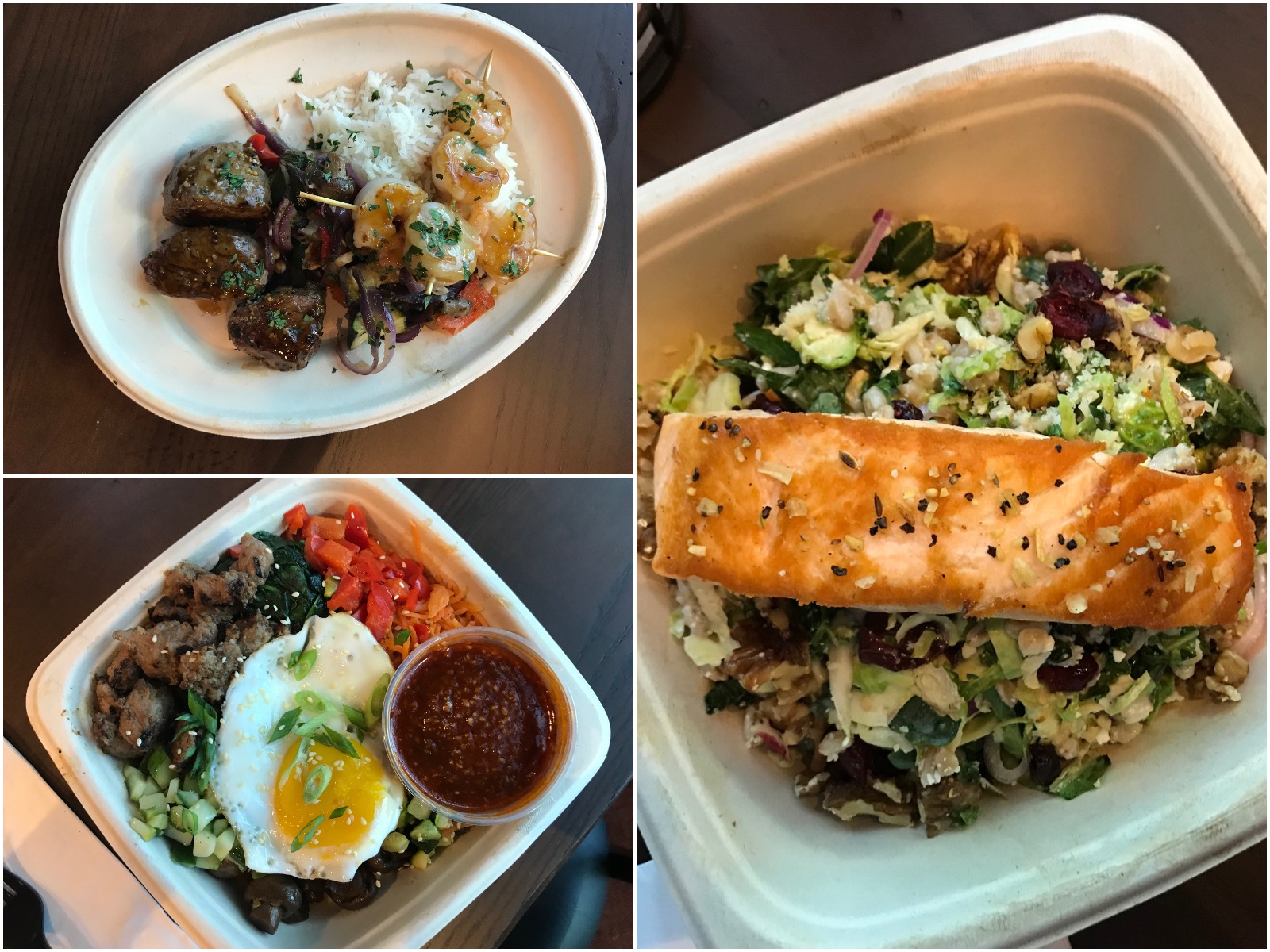 Then, of course, there's the feature presentation: the eight movie auditoriums themselves, all of which will show your film with laser projection – the first Marcus Theatre to include laser projection on all of its screens. The Movie Tavern will have one SuperScreen DLX, which features a large screen, Dolby Atmos sound quality and design, USB ports to charge one's phone and reserved heated recliner seats. The other seven screens still feature Marcus' reserved DreamLounger reclined seating as well as the laser projection. 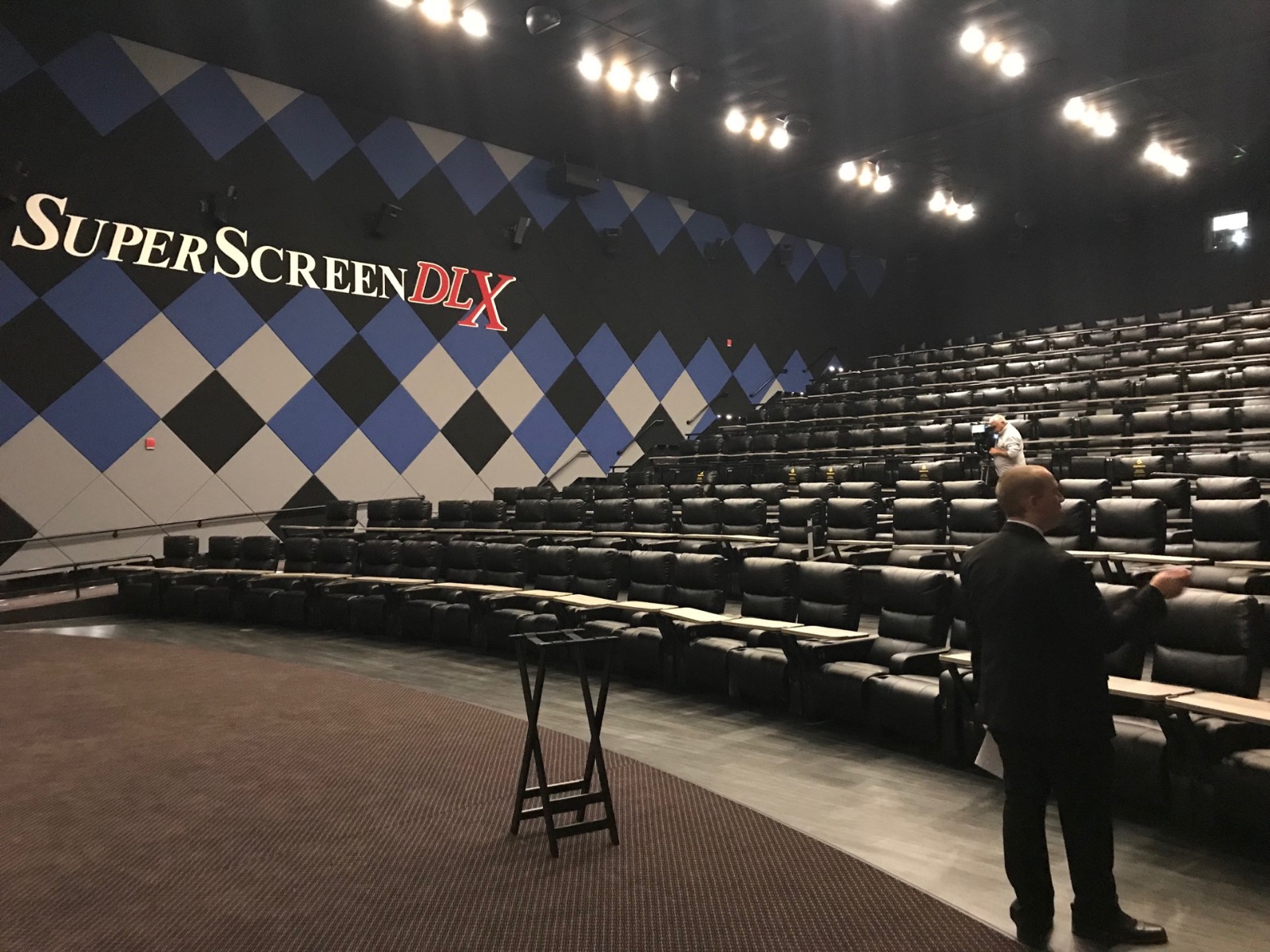 As for the Movie Tavern's opening slate of films for this weekend, the new cinema will show some of the latest blockbusters ("Joker," "Abominable," "Jexi," "The Addams Family" and "Gemini Man" – including in high-frame rate 3-D) as well as a Milwaukee exclusive screen of the new Natalie Portman astronaut drama "Lucy in the Sky" from the creator of FX's "Fargo" and "Legion."

Like many movie theaters, though, screenings will extend beyond just new releases into retrospective themed selections (for instance, this opening weekend at Movie Tavern will include a slate of showtimes for the original "Friday the 13th" as a part of its Halloween programming), special sporting events, unique live-broadcast events like theatrical performances and concerts, and more.

For more information on showtimes or on the venue's entire menu, visit Movie Tavern's website. And now on with the show!