When Milwaukee Public Library announced it would open a new near South Side branch library to replace the 1960s-era Forest Home branch, we were the first inside to show you the space and talk about the history of the new location.

Now, the library – which is part of a mixed-use development at the former Hills Building, 906 W. Historic Mitchell St. – will celebrate its grand opening from 10 a.m. until 5 p.m. on Saturday, Oct. 7, and we once again got the first look. 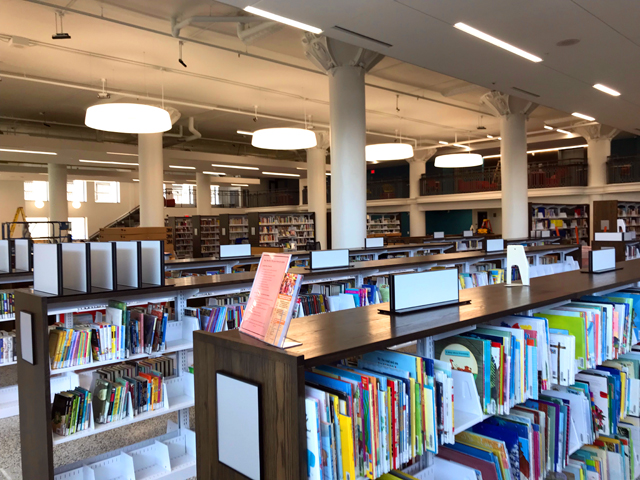 The grand opening event will include a 10 a.m. ceremony, with a ribbon-cutting, crafts and other activities, refreshments and, at 2 p.m., a celebration and drumming workshop with Julio Pabon of De La Buena.

In preparation for the move, the final day of service at Forest Home Library, 1432 W. Forest Home Ave., was Saturday, Sept. 16. 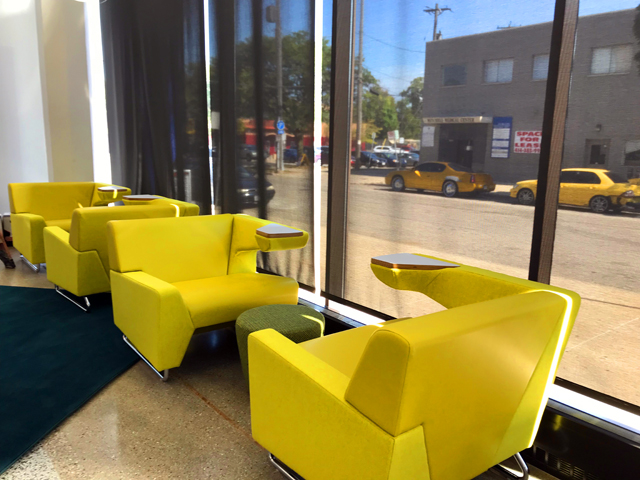 The new branch – designed by HGA Architects – is located on the ground floor of a five-story building on a prominent corner. There is also a makerspace on the lower level of the building and the main floor's original mezzanine has been restored and utilized, too.

In all, the library has nearly 23,000 square feet of space – illuminated with bright natural light through floor-to-ceiling windows – including flexible spaces, computer and technology areas, a community room (pictured below) and more. 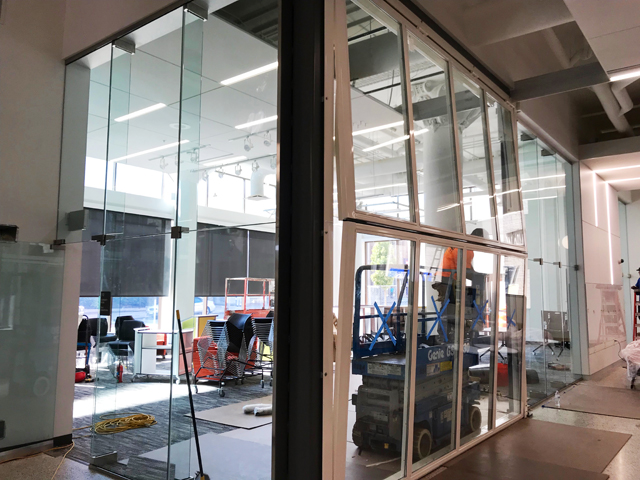 There's a "social stair" leading up to the mezzanine – which will have tiered, cushioned seating with outlets for laptops (pictured below before the cushions were installed) – and cozy reading areas, including one with a fireplace. There's also a community room with a flip-open door that can be closed when the room is reserved for a special event. 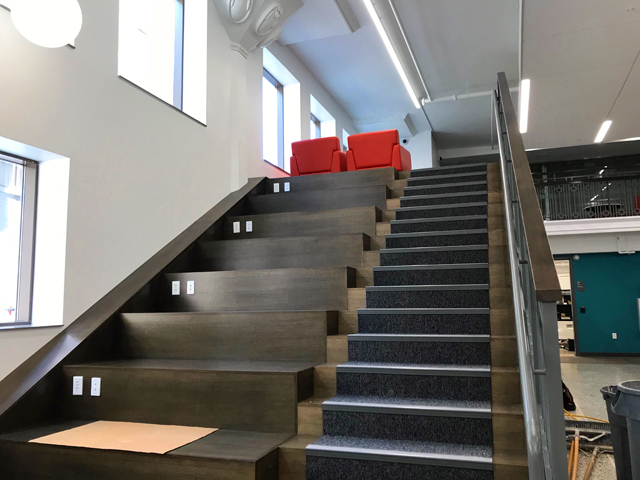 The windows have shades to reduce glare and heat on sunny days. New windows were cut into the west side of the building where there had been none. Now, there's even more light and the windows afford views of the alley, which the library is working to make into a traffic-free event space.

Upstairs on the mezzanine – the railing of which had been removed and stored in the basement and is now back in its original place, to stunning effect – there's a meeting room and some smaller study rooms, as well as seating with views down over the main floor. 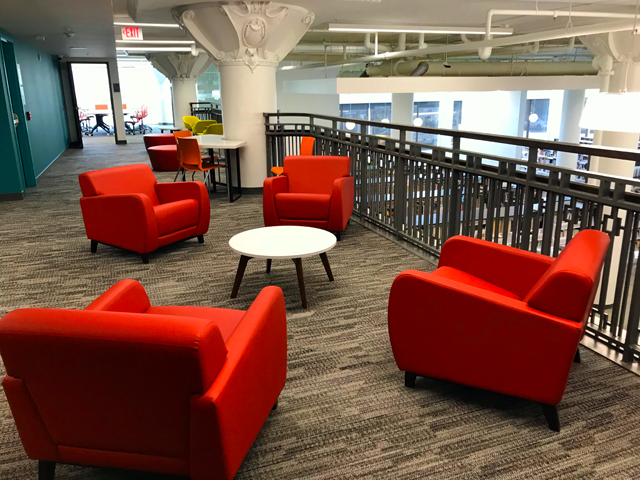 Up here you're close enough to the tops of the sturdy support columns to touch the decorative capitals.

The book collection has been refreshed, with up to 19 bins of new books joining the existing collection on the shelves.

The original staircase to the lower level remains and leads down into a 5,000-square foot lower level that includes 3,000 square feet of back of house resources, like a staff break room, a sorting room and other necessities. 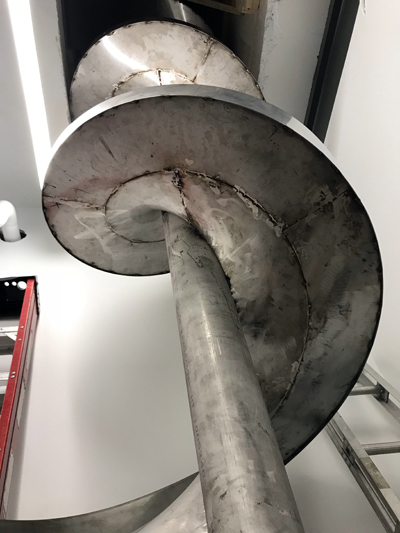 In what looks like a closet, there's the terminus of a cyclone slide that carries books down from the book return slot to the adjacent sorting room.

According the MPL spokesman Sam McGovern-Rowen, these spaces were originally planned for the main floor until the developer of the residential portion of the building offered use of this area.

"All of this would have been upstairs," McGovern-Rowen said. "Because we could move it all down here, all that space (on the main floor) is now used for patron areas."

About 2,000 square feet of the lower level is dedicated to the makerspace with a full kitchen (pictured below) that can be used for cooking classes and events with chefs, as well as desks with ethernet and power connections for computer users. 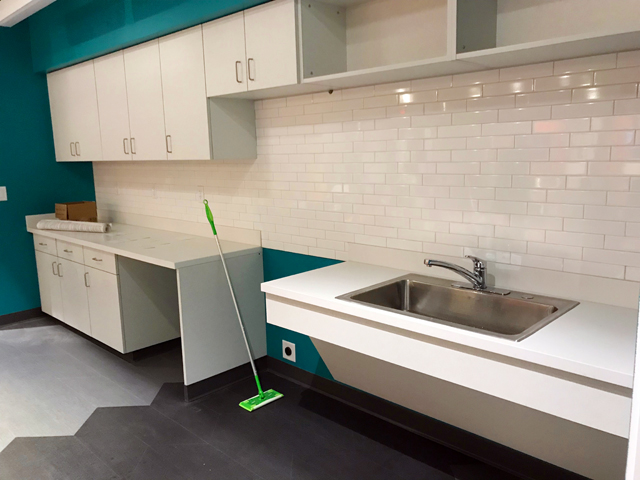 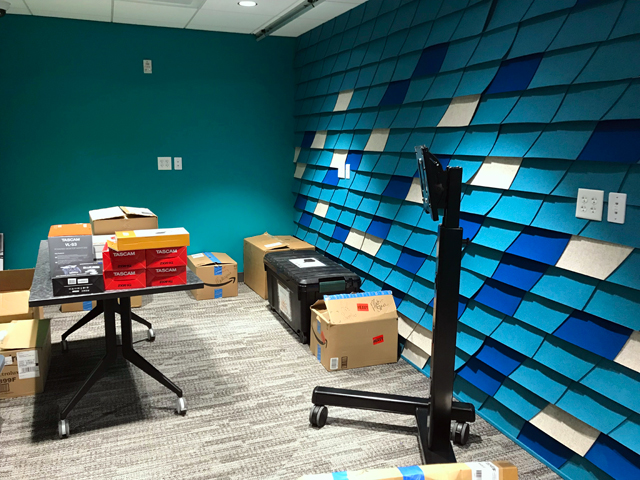 There's also a recording studio (in the photo above) and stations for video editing, music editing and graphic design.

"Imagine you're in the music studio making your mix tape,"says McGovern-Rowen. "You'll want to edit it, so you come out here to the editing station, then you can make your video over here and design the cover at the graphic design workstation."

McGovern-Rowen said the makerspace will be operated in tandem with community partners.

"Because we were working with an existing building, the construction costs were lower (than on other built-from-the-ground-up projects)," says MPL's Eileen Force-Cahill. "That has allowed us to do some different things (like the makerspace)."

"Mixed-use developments like this are the only way we can really build new branch libraries these days due to the funding challenges."

The Mitchell Street branch is now the largest in the MPL system, taking that title from the Washington Park Library. 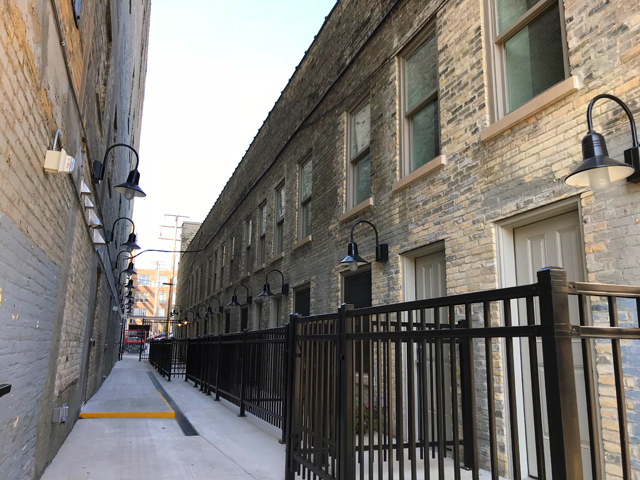 Above, there are 52 apartments, of which seven are rooftop "garden" apartments, with patios that don't have much for views because of a parapet wall, but are extremely private (there's a photo below).

Out back in a low building separated by a small, now gated, alley, is a building with eight "townhouse" apartments. 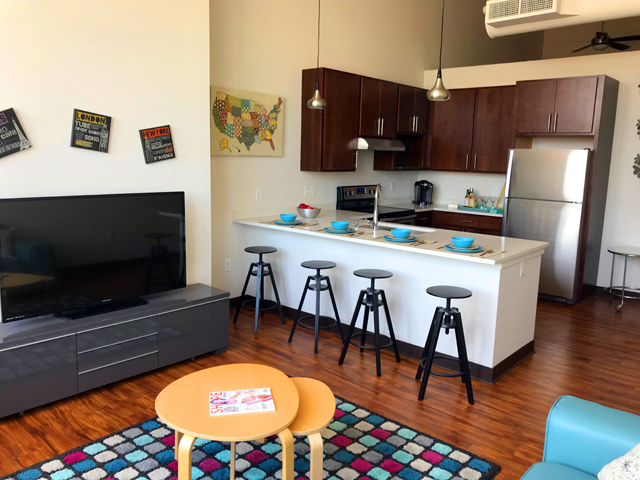 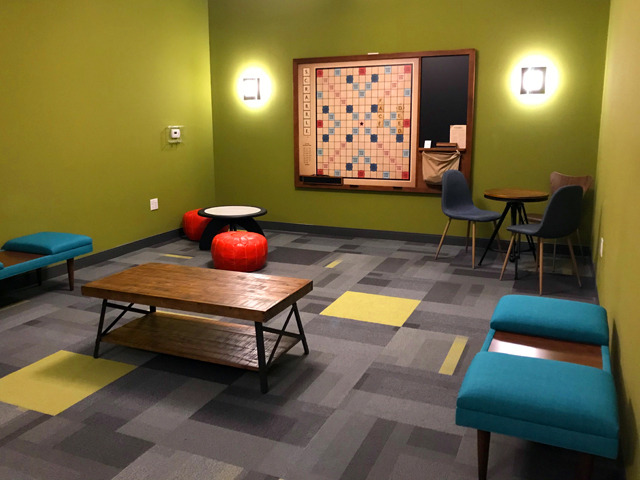 Eighteen of the 60 total units – all of which feel spacious regardless of their size, and some of which offer nice views of Downtown off in the distance – have been rented and occupants began moving in around mid-August. 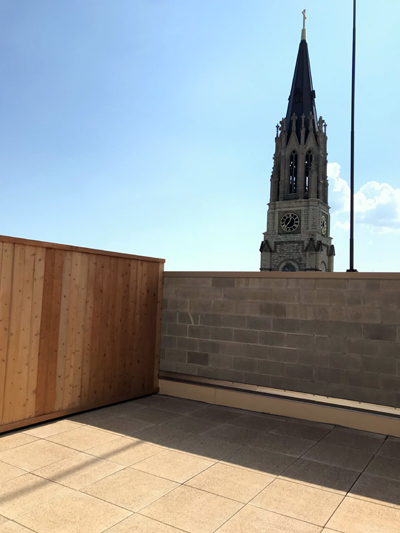 The residential floors – called The Alexander apartments – also have community rooms. One is enclosed for use as a party room and another has a game room theme, with oversized magnetic Scrabble and checkers boards mounted to the walls.

Parking for the library and for the residents is behind the building.

A replacement for the Mill Road branch is currently in the community input and design phase. Tax credits were approved in May and groundbreaking is tentatively planned for around March 2018, with a spring 2019 opening expected.

Young Development, the developer selected to build a new King library on King and Locust, is currently working on financing for the project.

Locations are currently being scouting for a replacement for the Capitol Drive branch. No RFP has yet been issued for that project.