The Original officially opens its doors to the public at 2498 N. Bartlett Ave. on Thursday, Sept. 21 at 4 p.m. In the meantime, we've got a first look at what you can expect from the casual upscale eatery that has moved into the space that formerly housed Red Dot.

The Original officially opens its doors to the public at 2498 N. Bartlett Ave. on Thursday, Sept. 21 at 4 p.m. In the meantime, we’ve got a first look at what you can expect from the casual upscale eatery that has moved into the space that formerly housed Red Dot.

Diners who pay a visit to The Original will find a comfortable, casually elegant space with a modern, yet timeless feel. On our visit during the restaurant’s soft opening, the restaurant was filled with eager diners, chatting sociably and awaiting their first taste of Chef Vinny Cornils’ menu, which contains options for a variety of diners including vegetarian and gluten-free guests.

To start off our meal we sampled two vegetarian plates off the "Table Shares" section of the menu: Nashville hot tofu and cauliflower ($7) and summer corn ($10).

Despite its name, the Nashville hot tofu and cauliflower delivered just a hint of spice; but it was crisp and flavorful, with both the honey and blue cheese dipping sauce offering up complementary flavors. The dish was good as-is; however, if you want it to more closely resemble the inflammatory Nashville-style dish, you can request to have it made extra spicy. You can also forego the honey, if you’d prefer a more straight-up heat. 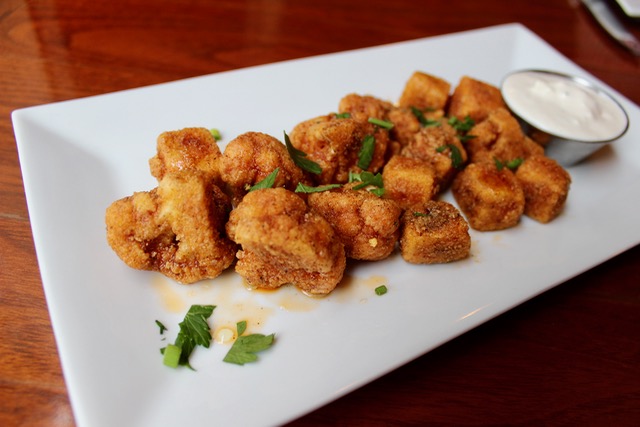 Meanwhile, the summer corn was a feast of seasonal flavors and textures. Well-seasoned pieces of grilled sweet corn flanked the plate, which also contained a generous helping of sweet corn custard surrounded by shaved aged cheddar, lime zest and a whorl of chili oil. 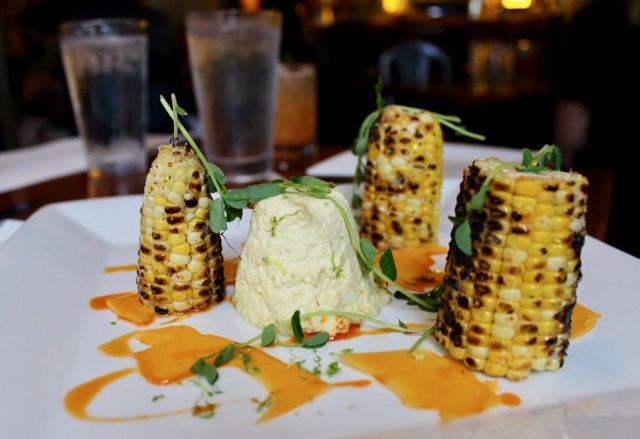 Butter lettuce salad featured heirloom tomatoes that were roasted to bring out their sweetness, along with marinated cucumbers, onions and a blue cheese vinaigrette. To underscore the blue cheese flavor, a buttery crostini with blue cheese was served alongside ($8). 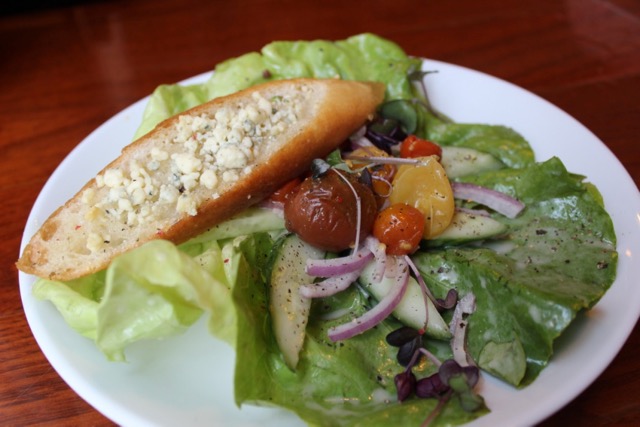 One interesting thing about the menu at The Original is that each entree has suggested beverage pairings. Most have options for wine, beer or a house-crafted cocktail (each of which can also be ordered independently). 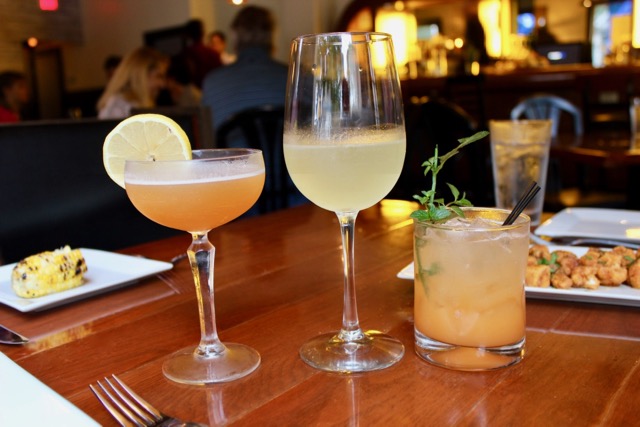 Our entrees included at least one dish that paid homage to Milwaukee’s German heritage: meltingly tender beer braised pork cheek topped with mustard creme fraiche and served with spaetzle on a bed of red onion jam ($20). 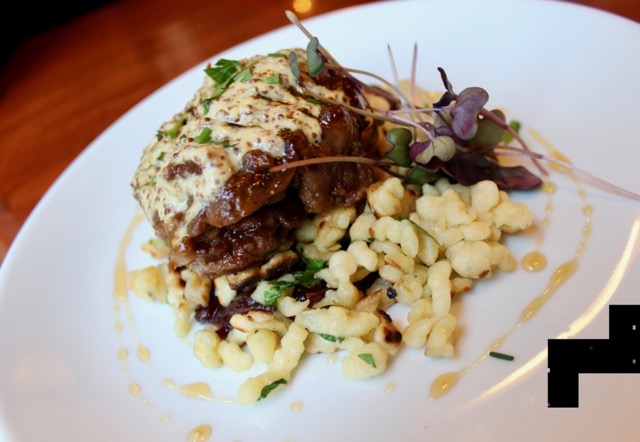 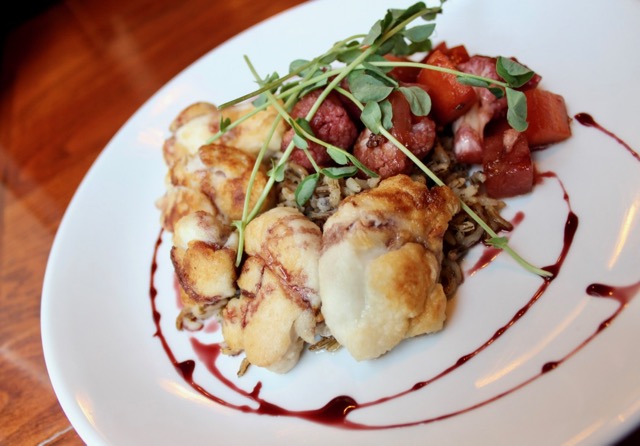 Meanwhile, a hefty 10-ounce portion of flat iron steak came perfectly cooked and topped with a flavorful smoked tomato compound butter made from tomatoes gleaned from the gardens of students in the Learn Earn Grow program. The sliced steak was served atop marble potatoes cooked in duck fat and green beans and drizzled with a red wine syrup ($32). 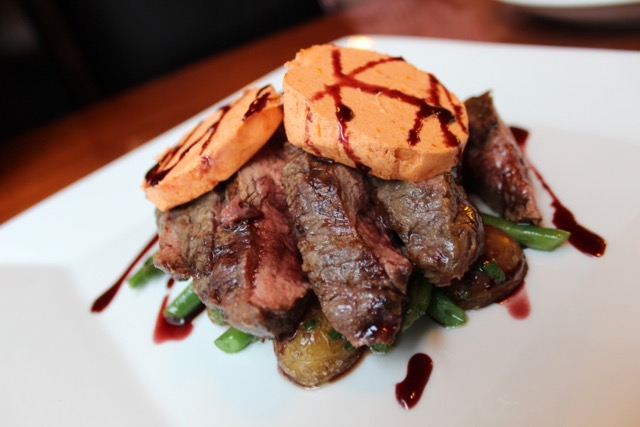 On the sweet side, we tried two desserts (each $7). The first – a dish that combined both sweet and savory – was baked bread cheese topped with smoked almonds and walnuts with a blackberry brandy fruit compote. 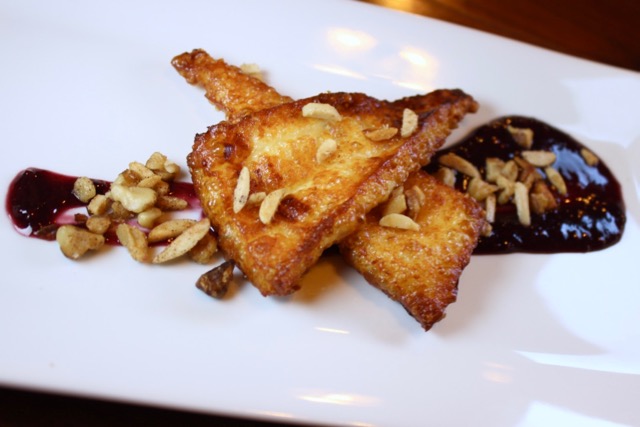 The second was an indulgent chocolate cheesecake featuring deeply flavored cheesecake, chocolate ganache and a hint of espresso. The richness was cut with a bit of berry sauce. 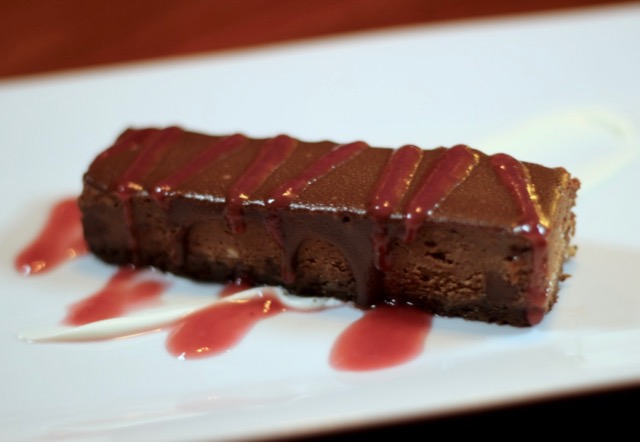 In addition to dinner service, The Original also serves brunch on both Saturday and Sundays. Read a bit more about the brunch menu here.

The Original will be open for dinner seven days a week, from 4 to 10 p.m. The bar will remain open from 10 to midnight. Brunch will be served on Saturday and Sunday, from 10 a.m. to 3 p.m.