Carnevor's new digs prove a great match for its food

We knew that the Carnevor remodel, implemented by Flux Design, would be impressive. But, it wasn't until visiting the restaurant for ourselves that we understood exactly how ingenious it really was.

It’s been nearly three weeks since Carnevor reopened in its new location at 718 N. Milwaukee St., and the buzz surrounding their new space has been palpable.

We knew that the remodel, implemented by Flux Design, would be impressive. But, it wasn’t until visiting the restaurant for ourselves that we understood exactly how ingenious it really was.

The Carnevor experience begins the moment you walk through the front door and navigate through a tunnel-esque hallway made from hand-carved wooden spires.

Larger, more pronounced "ribs," a trademark Carnevor element, are suspended above the front dining room, creating a uniquely intimate and artistic atmosphere. Meanwhile, from any seat in the dining room, you’re flooded with textures – from wavy wooden paneling to cagelike metal structures, from jagged stone to smooth reflective panels that resemble honeycomb or some sort of reptilian scales. 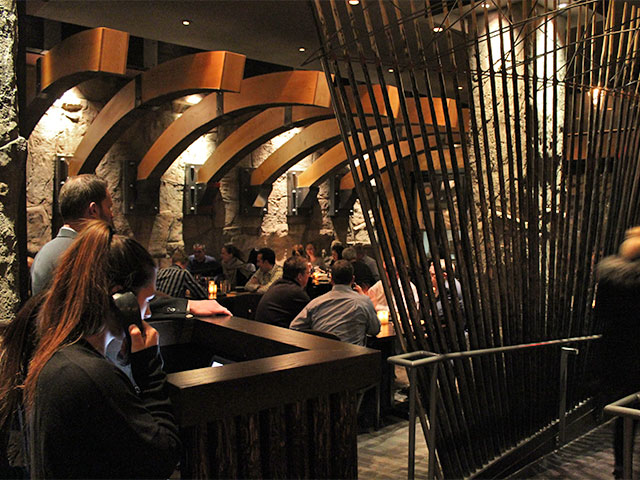 But, it wasn’t just the atmosphere that impressed. Armed with the knowledge that there were some new items on the menu at Milwaukee’s most renowned steakhouse, we approached our dinner with open minds, looking forward to the potential of experiencing a meal that went beyond steak and potatoes.

We began our meal with an appetizer of Carnevor's Hidden Creek Farm Mangalitsa ravioli ($13) – fresh pasta stuffed with pork confit and pork belly and served with a smoked onion pork jus – which was hearty enough to share with the table. 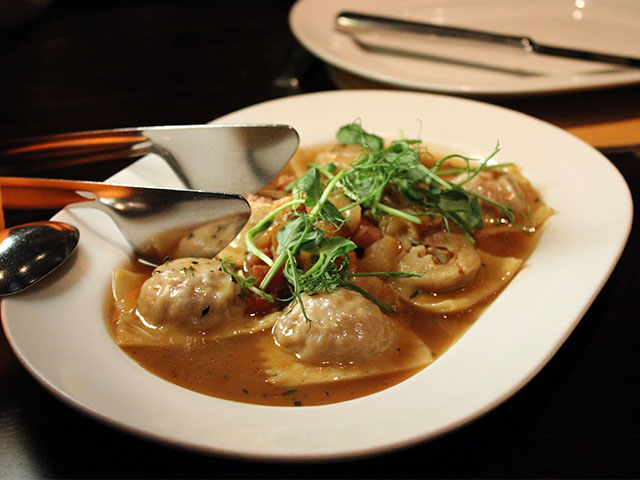 When we moved on to soup and salad, the classic wedge salad was fresh, crisp and perfectly dressed. Even the tomato was flavorful – not a small feat in the midst of Wisconsin winter. 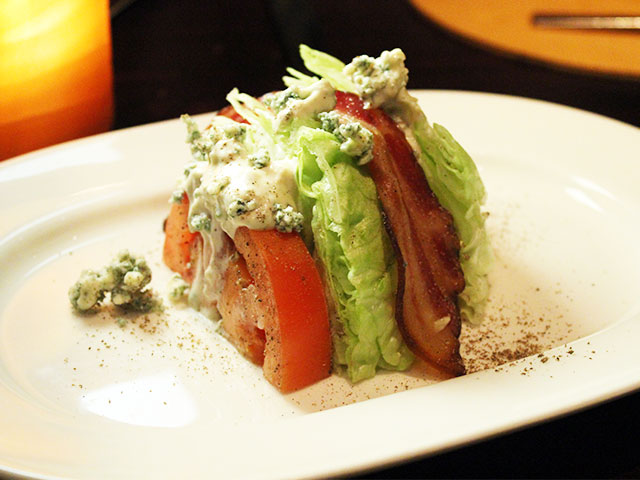 I should add that, throughout the meal, our service was spot on. When our table mentioned that we’d like to share a number of items off the menu, our waiter was immediately responsive, offering first to divide our wedge salad into three portions, and then – throughout the meal – providing plenty of tasting plates and utensils to make our experience as convenient as possible.

The soup of the day was potato leek. Despite the fact that not a drop of cream was added, the soup was ultra creamy and flavorful thanks to the addition of bacon, white wine and garlic. A topping of crisp bacon, fried leeks, chives and diced baby potatoes added an additional layer of flavor and welcome texture. 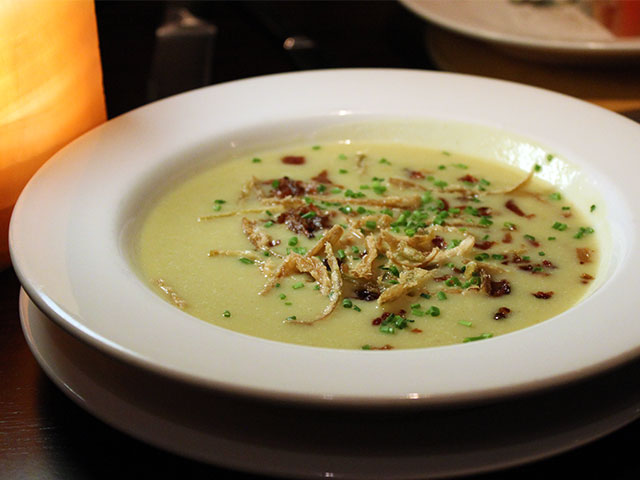 For our entrees, we opted for two specials, something Carnevor is doing more of in its new location – one fish and one Hidden Creek Farm specialty – along with a steak, since it’s simply not prudent to leave a steakhouse without trying at least one. 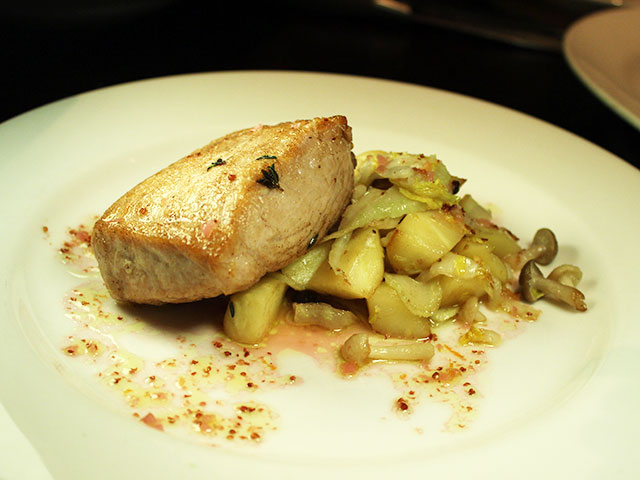 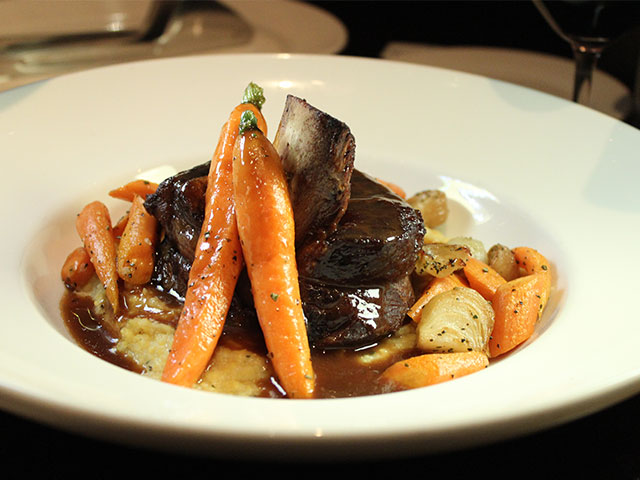 We didn’t go too fancy on our steak choice, opting for the wet-aged bone-in ribeye ($52) au poivre. It came perfectly medium rare with a delightfully crunch exterior packed with pepper flavor. 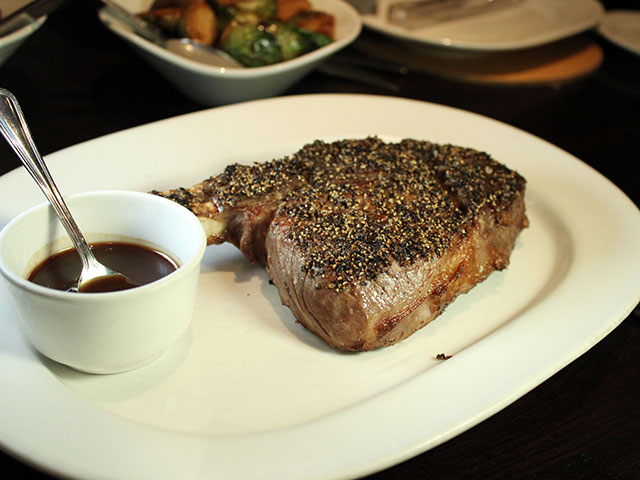 But, since the steak comes a la carte, we did order three sides to share – the macaroni & cheese (to which we added lobster, $19), sauteed exotic mushrooms ($10) and caramelized brussels sprouts. Each was a solid choice – though the one miss of the evening may have been with the addition of lobster to our macaroni and cheese. The dish came out to the table piping hot, which was great; but, the lobster didn’t hold up well. Rather than being tender and sweet, it ended up overcooked and, as a result, a bit tough. 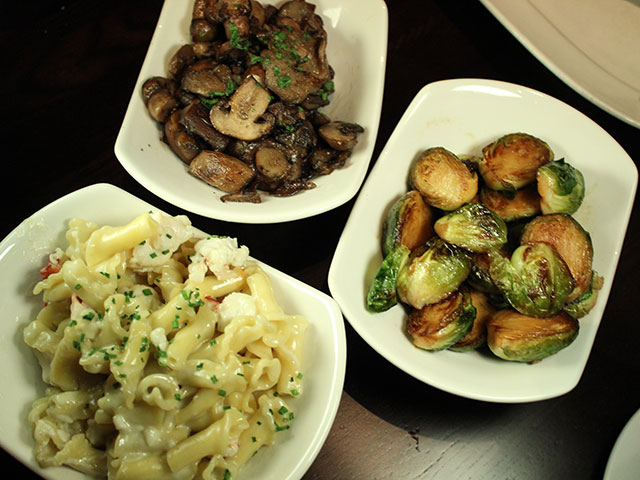 We skipped over the creme brulee, ricotta cheesecake and turtle desserts and headed for the shareable section of the menu where we found two we couldn’t pass up. The dessert doughnuts ($8) just barely resembled doughnuts; rather, they were light and crisp like deep fried pate choux with rich eggy centers. They were accompanied by three dipping sauces: a rich vanilla anglais, blueberry preserves and a deep chocolate ganache which was really gilding the lily. 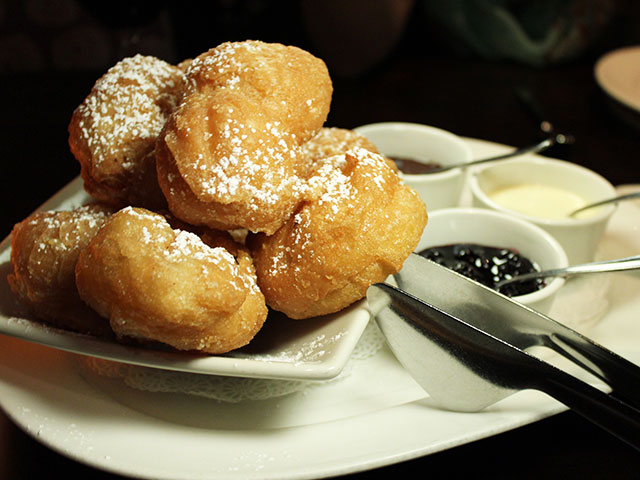 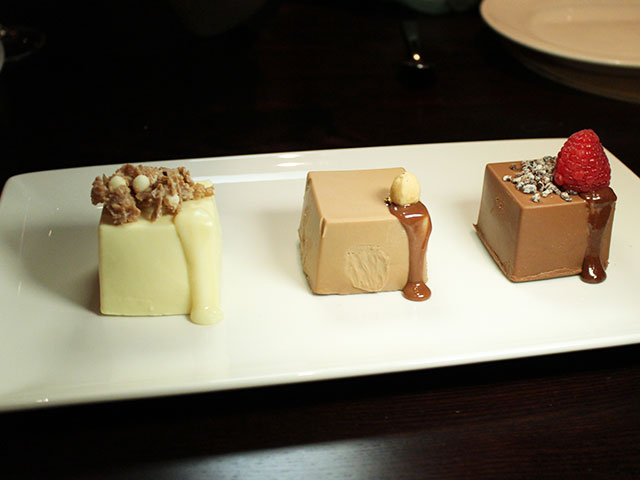