Nostalgia meets Asian inspiration at dandan, which opens next week

The wait for dandan, the new restaurant from chefs Dan Van Rite and Dan Jacobs - and one of the most anticipated openings of 2016 - is nearly over. And we have a first look at the space, menu and experience that awaits Milwaukeeans in the Third Ward.

The wait for dandan, the new restaurant from chefs Dan Van Rite and Dan Jacobs (and one of the most anticipated openings of 2016), is nearly over.

The restaurant, located at 117 N. Jefferson St. in the building which formerly housed Tulip, will open to the public beginning Friday, July 29.

The concept, which was conceived by the chefs during a walk into the Third Ward (and fittingly past the destined location) after Festa Italiana, is built heavily upon memories – primarily those the chefs have of eating and cooking Asian cuisine.

"When I was a kid, Chinese food was exotic," notes Dan Jacobs. "The flavors, the smells, the rooms … there were dragons and weird light fixtures and bird cages … and I always thought the food was super exotic. We’d make my parents order tiki drinks so we could keep the cups."

The building which houses dandan has a long history in the Third Ward. Built in 1885, it was one of only a few buildings to survive the Great Fire of 1892. You’ll see nods to its history in exposed Cream City brick. But you’ll also find modern urban-inspired elements intertwined with more traditional Asian design. 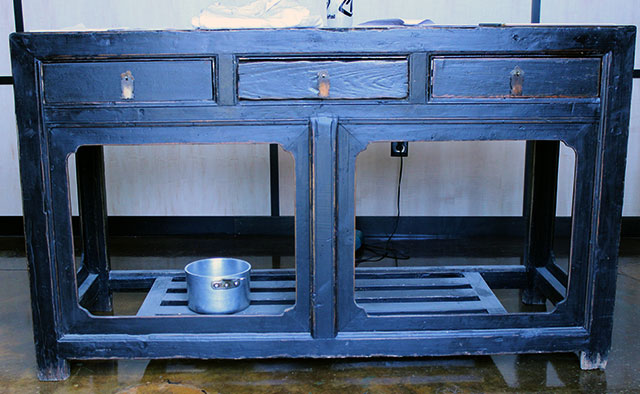 A mural by Scott Starr of RevPop provides a focal point for the space, incorporating the Chinese characters for "dandan" along with traditional images like the Chinese dragon, a symbol of power, strength and good luck. 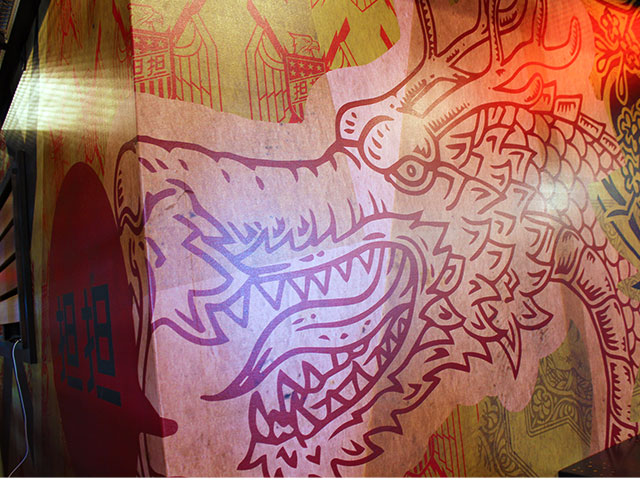 A hall reminiscent of a Chinese alleyway connects the central portion of the restaurant and bar to a semi-private dining area, which mimics the look of a dining pergola with wooden slats partially obscuring the view of the dining space itself. 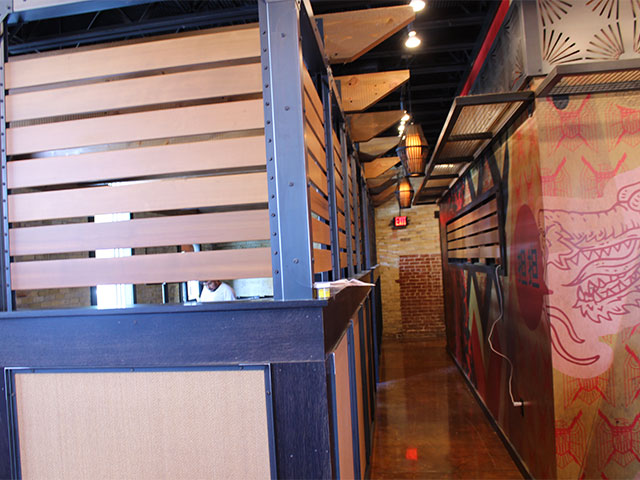 The main dining room offers up large booths that accommodate up to six diners along with four-top tables. White oak tables bear brass accents, while maple tabletops are emblazoned with stenciled art. 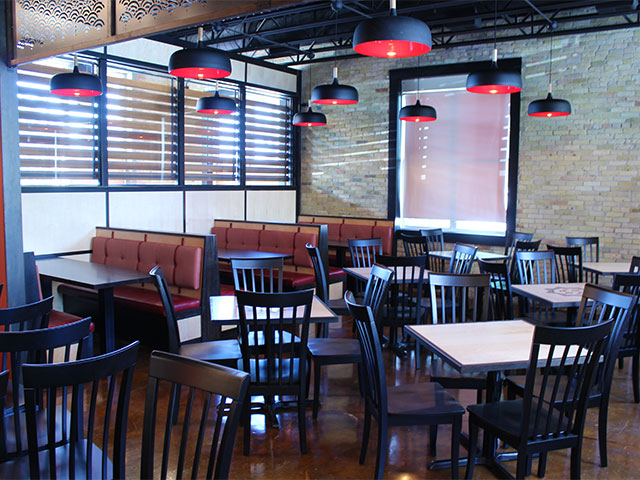 Meanwhile EsterEv, a private dining space named after both Jacob’s and Van Rite’s grandmothers, will form the basis for dandan’s "restaurant within a restaurant," a tasting menu concept which will launch this fall featuring an ever-changing menu of globally-inspired fare.

For those who wish to enjoy dinner or a cocktail out of doors, dandan also offers up al fresco dining on their front patio.

"We completely achieved what we wanted," says Jacobs of the finished space, "It’s a look that emulates the Chinese restaurants we went to as kids as well as a street feel that’s very fun." 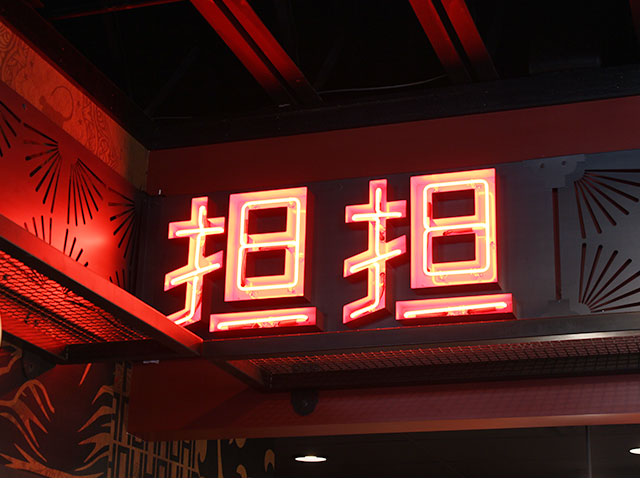 The menu at dandan, which was inspired by countless visits to Chinese restaurants over the course of two lifetimes, pays homage to those memories of childhood and a beloved cuisine with which both chefs fell in love. There’s also a hefty dose of creative license thrown into the mix, meaning you’ll find both modern interpretations of classic dishes as well as globally influenced offerings inspired by Chinese-American fare.

The menu is divided into sections including dim sum, dumplings, pancakes and entrees. There are recognizable appetizers like egg rolls and crab rangoon. But there is also charred sour sausage, Chinese-style crepes with ham, mung bean kimchee, fried chicken and okonomyaki (a Japanese-style pancake featuring a variety of ingredients). Singapore and dandan noodles will be featured alongside dishes like twice-cooked pork belly and Peking duck, which is glazed with honey to produce a deeply golden exterior. Menu pricing will range from $6 to $40+ (the latter for items like whole Peking Duck) with most dishes in the $12-20 range. 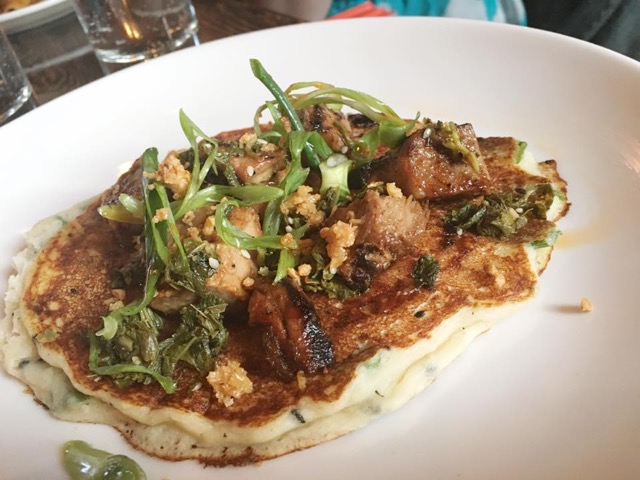 Jacobs says he’s excited about everything on the menu, but there are a few items he noted as particular favorites.

"I really love our salt and pepper squid," he says. "Our egg roll is also something we worked really hard to master. And one of the things that totally reminds me of eating Chinese food as a kid is the fried shrimp toast with spicy mustard. It’s ridiculously simple, but one of those things from childhood that has just stuck with me."

Each dish on the menu also seems to carry with it a story. Take for example the schmaltz fried rice, which was inspired by one of the chefs’ visits to New York during which they happened upon a Jewish deli which sat alongside a Chinese restaurant. "It’s a tie to my Jewish heritage," notes Jacobs.

Van Rite, who describes himself as "more of a noodle and barbeque guy," says the menu incorporates an Asian influence that he’s practiced in his cooking for over a decade.

"I look at it as a challenge to really broaden my knowledge and cook a new cuisine," he says.

Van Rite was at the helm of a variety of recipes, including the dough for the restaurant’s dumplings, which saw much experimentation with different types of flour, until they created a recipe with just the right amount of "chewiness."

Van Rite says one of his favorite dishes is the cumin lamb noodles. 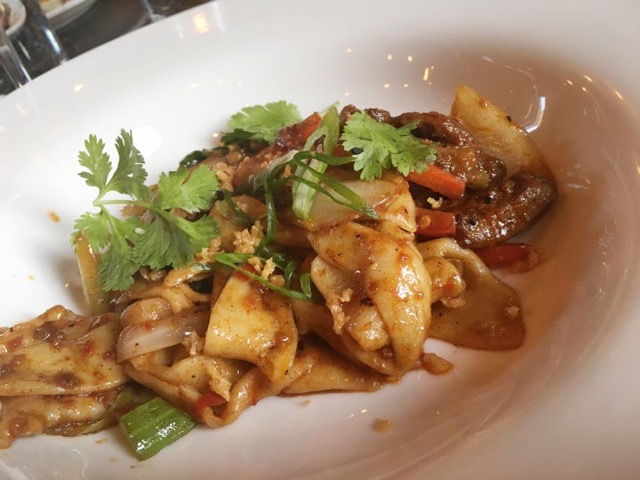 "It was inspired by a dish at Xian Famous Foods in New York that had hand pulled noodles with really spicy oily lamb," he says. "We made ours less oily. Along the way, we came up with our own chile oil called Bongo Sauce, named for saucier Micah Buck. It’s like nothing I’ve ever had. We like it so much that it’s incorporated in a lot of our dishes."

On the sweeter side, diners will discover inspired desserts – including a variation on moon cake, a bubble tea waffle "banana split" and Chinese take-out doughnuts – created by pastry chef Jaceleen Latin-Monagle, formerly of the SURG Restaurant Group.

At the bar, Jordan Burich has curated a wine selection to accompany the Asian-inspired cuisine which includes about twenty selections by the glass, as well as 30 options by the bottle.

Beer will be available both bottled and on draught, with eight taps that include rare finds like Finch’s Western Exposure, a witbier with flavors of lemongrass and citrus. 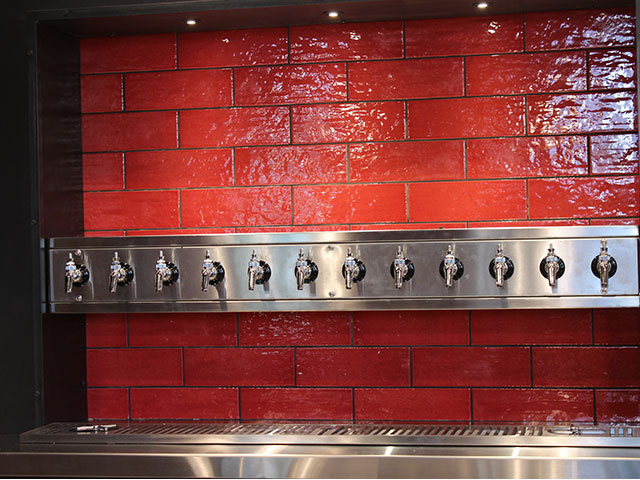 Culinary inspired cocktails are playfully constructed from locally produced spirits and modifiers from Twisted Path Distillery and Top Note Tonics. Selections include tiki-inspired cocktails like the dandan Mai Tai Variation #420 and the Fire Comin’ Outta the Monkey’s Head along with a Brandy Alexander masquerading as bubble tea. The house tap cocktail called "Moon Lake Mule" is an ode to Ningbo, Milwaukee’s sister city in China.

Beginning July 29, dandan will be open Tuesday through Saturday from 5 to 10 p.m., with lunch, carryout and delivery services coming soon. Parking is available in the private parking lot adjacent to the restaurant on Erie Street after 5 p.m.