In any city, there are a handful of culinary landmarks that have remained consistent across the decades and have become iconic symbols of the local culture. In Milwaukee, one of those places has long been the Five O'Clock Steakhouse.

In Milwaukee, when you think of steak, you can't help but think of Five O’Clock Steakhouse.

The near west side has long been beloved for its top-notch food and evocative, retro supper club atmosphere.

This winning combination has not only made Five O’Clock Steakhouse one of the city’s top – if not THE city’s top – special occasions venue, it has won countless accolades here and beyond for the place, now run by Managing Partner Stelio Kalkounos.

But it's also well-known beyond MIlwaukee as the many photographs of celebrities visiting Milwaukee and dining at the restaurant, which you can see on the Five O'Clock social media, will attest. 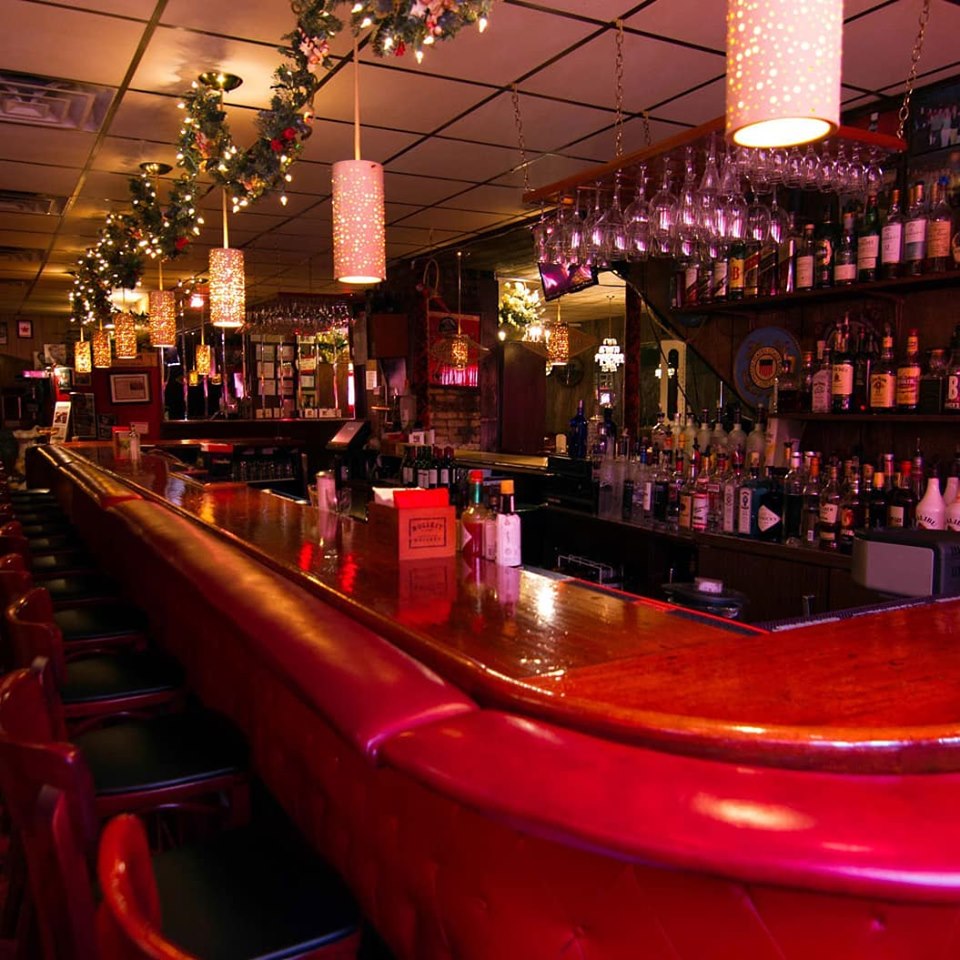 Two of the main draws at the Five O'Clock: the bar and the steak. (PHOTOS: Facebook) 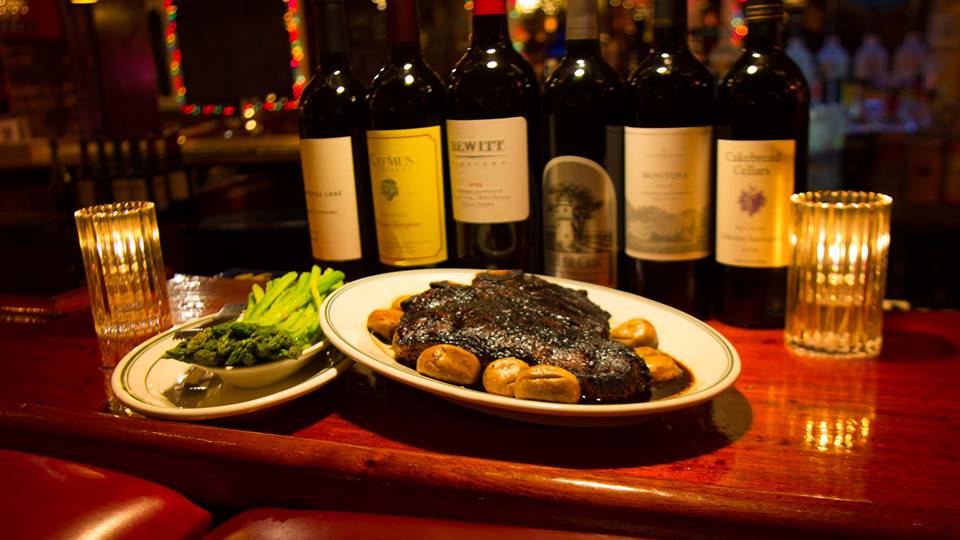 While the restaurant and lounge has long occupied its home at 2416 W. State St., that building is not the original home of the Five O’Clock Club, which began life as a bar.

The Five O’Clock Club's current home was erected in 1909 by real estate developer August Dietrich (aka Diederich), who tore down two houses on the site to make way.

Dietrich was born in New York City in 1858, and came to Milwaukee as a child. In the 1890s, Dietrich moved into the real estate, fire insurance and loan business. Active in politics, he was elected as an alderman in two districts.

Dietrich invested in the construction of commercial buildings which could be rented to tenants – both residential and commercial – and sold at a profit, and this building was one of them.

Dietrich, who lived near the site on, on 28th Street, tapped architect Charles Tharinger to design the structure.

Tharinger – who also designed this residence and this distinctive commercial building, among others – designed a building faced in red brick structure with two stores with apartments above.

It's a simple, but attractive retail building with a cornice delineating the upper edge of the storefronts. Above, are two window bays, each with an arched central window.

The building was constructed by mason R. Hoeppner and carpenter William Strack. 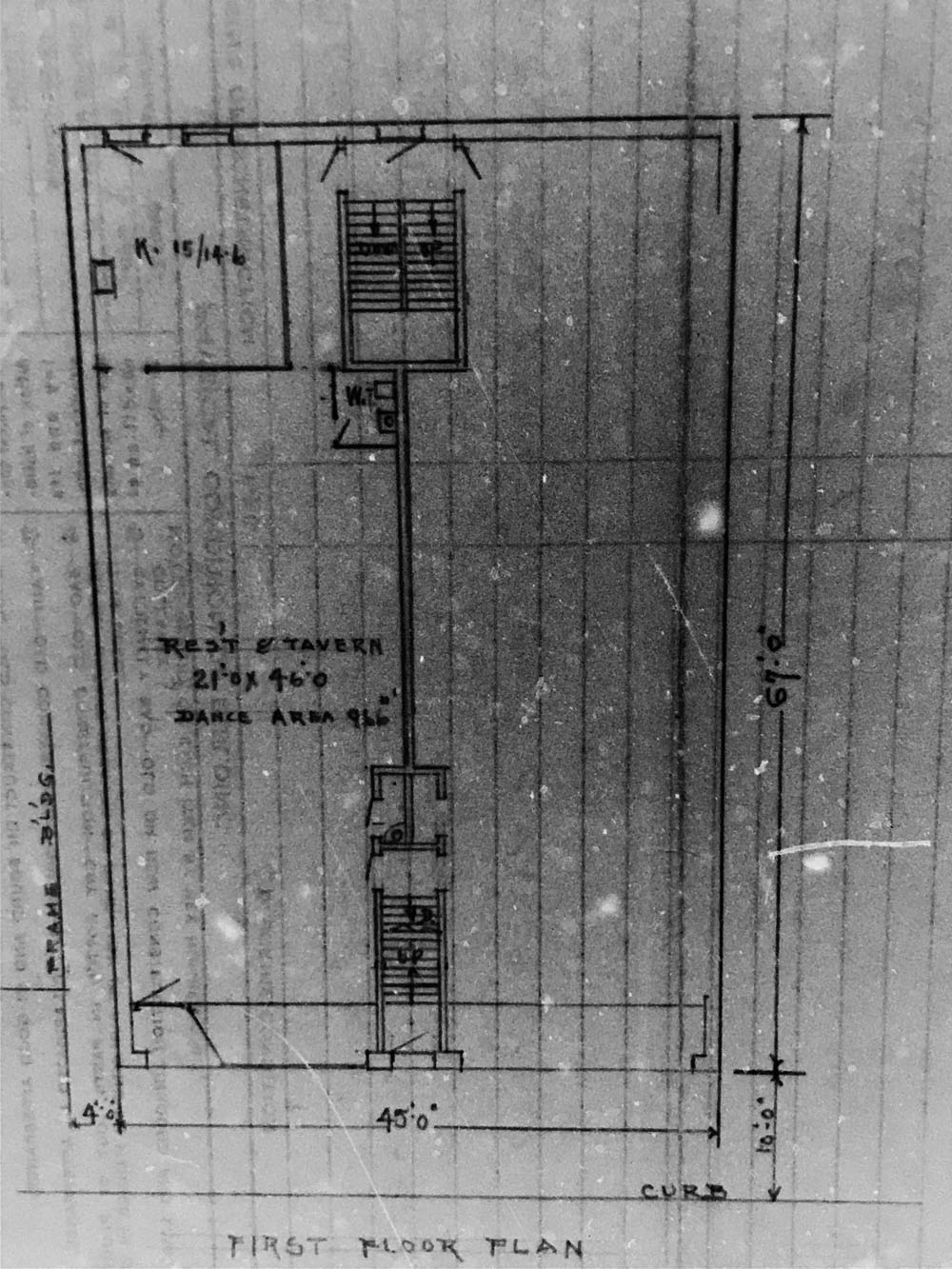 One of the retail spaces was to house a bakery and in 1910, a machinist named Carl Birschel opened a delicatessen, which operated nearly a decade.

By 1920, William Schneider opened a pharmacy, that by the late 1920s was operated by Ben Porath, who lived in one of the apartments above with his family and who renamed the business Ben's Drug Store.

The following year, a "Mr. Turner" opened a restaurant in the former drug store, but he soon gave way to Alma Lapsley, who ran it as Mother’s Restaurant.

But Lapsley didn't last there long, either and in 1933, JoAnn Clark opened a restaurant and then added a bakery.

In the storefront on the east end of the building a Mrs. Drenka has a store called "Mrs. Drenka’s Products," thought it's unclear what she sold.

When Prohibition was repealed in 1933, Frank Murray moved his eponymous bar into the again empty restaurant space and ran for a couple years, and then Frank Kelly renamed it Kelly’s Tavern in 1938.

When Murray was finished, Adrian Traas took over and the era of the Five O’Clock Club begins on 24th and State.

The birthplace of the Five O’Clock Club was a long-gone tavern building at 1217 W. Galena St., now a barren lot overlooking the I-43 freeway and Leinenkugel’s 10th Street Brewery across the busy interstate.

When Prohibition ended in 1933, Fellner’s Tavern operated here but by 1936 Bertha Mack and her husband had taken it over and renamed it the Five O’Clock Club.

"Your drink is on the house every afternoon at five, with Mack’s compliments," read one newspaper ad. "Come in soon, come in often. A delicious full course dinner, complete from soup to dessert, offering delicious chicken and steak."

The cost of that meal? Sixty-five cents. 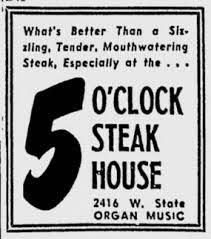 By 1938, Adrian and Sue Traas were behind the bar at the Five O’Clock Club, and when they relocated to 2416 W. State St. later that year they kept the name.

Traas would remain until 1943, when John W. Cregar, who was no stranger to newspapermen, took over the bar. 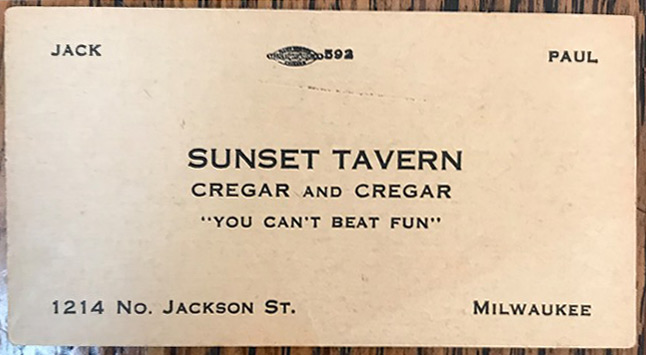 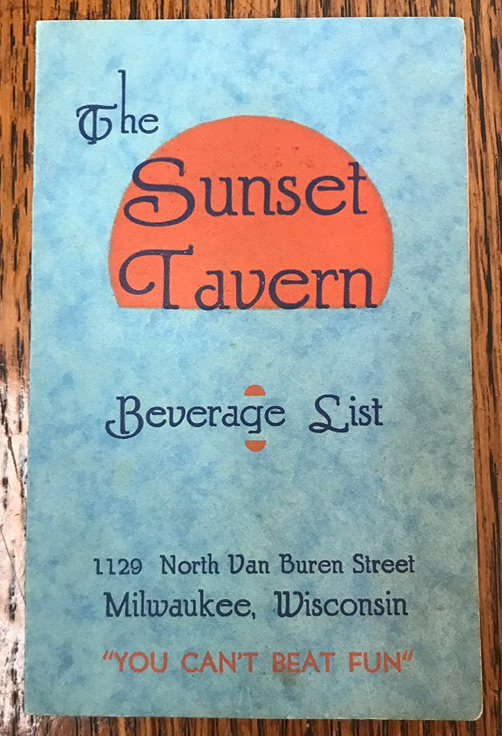 In 1934, Cregar paid his $200 fee, but was then denied a license by the Common Council after neighbors’ complaints about the bar. His application for a refund was denied. Cregar’s suit was being used as a test case and more than 200 similar cases were waiting to see how the judge would rule before filing their own suits. 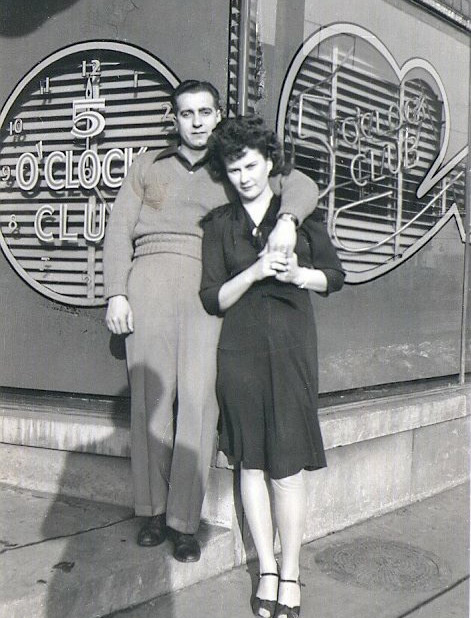 The suit was dismissed, with the judge ruling that, "Even though Cregar was qualified to operate a tavern, the council ruled that under the statues, he was not entitled to a license. A license to sell intoxicating liquor is a privilege to be enjoyed with the conditions are complied with. Society has a right to protect itself and help sobriety, peace, comfort and happiness of the community, and to demand reasonable regulations, and such right is tantamount to the private rights of the individual."

The Cregars were the last owners before Wilmer "Bill" Coerper took over in 1948 and, for the next half-century, his name would become synonymous with the Five O'Clock Club.

Coerper expanded into a former motor belt store next door, adding the dining room, in 1950 and the upper-level Alley Cat Lounge soon after.

During Coerper’s tenure, the restaurant became among the best loved in Milwaukee, as much for its dark supper club vibe as for its relish trays and steaks.

It’s a place that has, in more recent years, won accolades from Saveur magazine, the Travel Channel, Thrillist and others.

Before his death in 1991, Coerper was, himself, also one of the big draws. 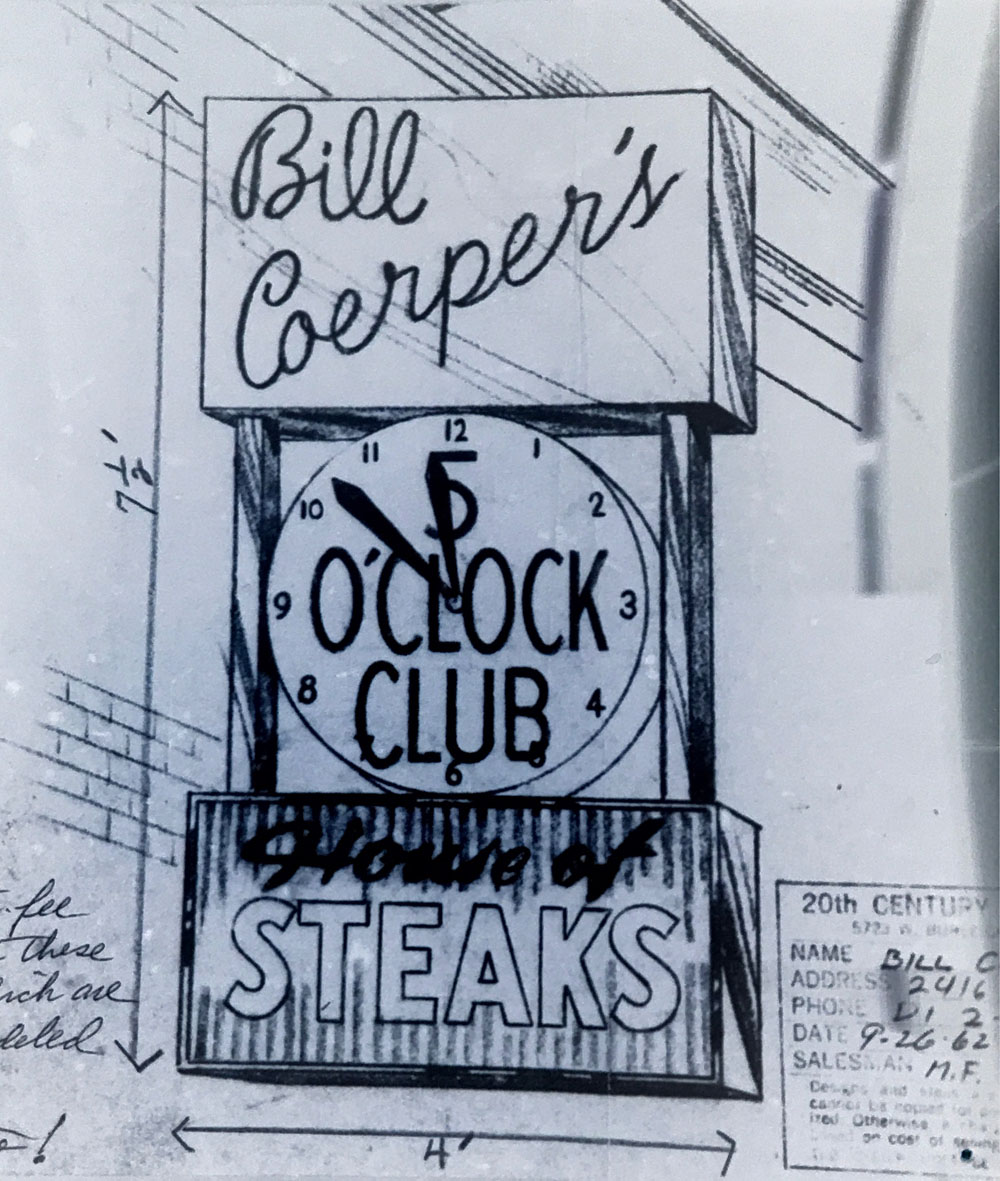 A pair of early 1960s renderings for exterior signage. 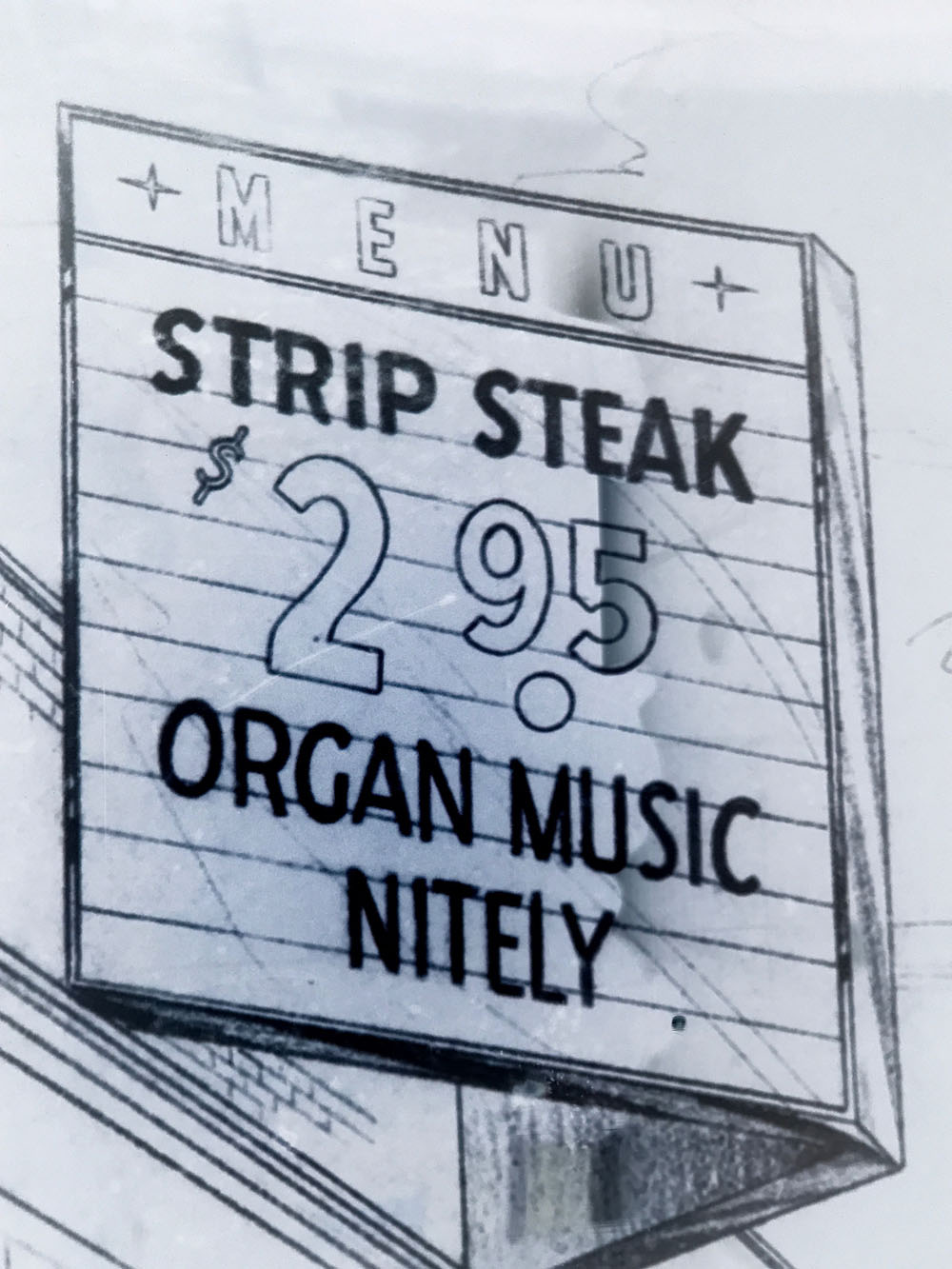 According to long-time customer Karin Gundrum, "Old man Coerper would stand guard at the hostess' spot keeping track of the comings and goings of everyone in his restaurant. For those of you who have never had the chance to meet Mr. Coerper, he was a man of small stature, gruff, with a full head of snow-white hair. 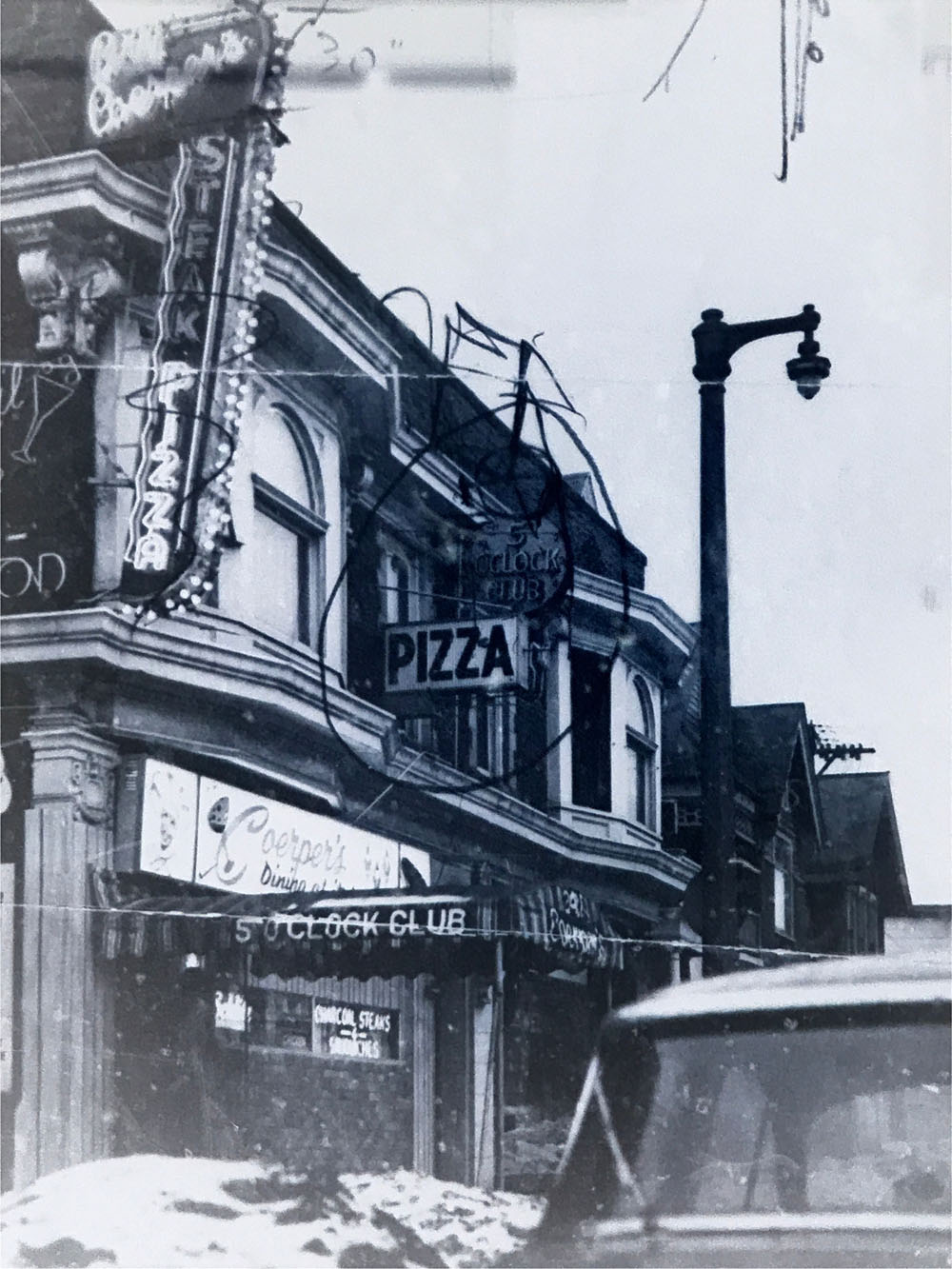 "Even with his petite frame," she wrote in a memory she submitted as part of a contest, "he would boss around those waitresses like there was no tomorrow. It was funny to watch the constant herding of his waitstaff."

Later, Coerper's son Ted would take over the family restaurant.

In 2004 the Kalkounos family, which owns some steakhouses in suburban Chicagoland, bought the place.

George Kalkounos was born into a farming family in Pyrgiotika Nafplion in southeastern Greece, says his son, Stelio.

The family came to America in 1966, stopping first in Brooklyn. George, says his Kalkounos, later arrived in Wisconsin to work in cheese and restaurants, but then moved to Chicago in 1975, where he honed his restaurant skills, opening a number of restaurants and event halls.

"Quite an achievement for someone with a third grade education," says Kalkounos.

"In 2002, my father’s cousin Sam, heard a rumor in the restaurant community that Ted Coerper was thinking of selling," says the younger Kalkounos.

"He pushed my father to begin discussions with the Coerper’s. My father immediately began pursuing the opportunity. Many other entrepreneurs were interested, but Ted (Coerper) preferred to sell it to another family business."

Kalkounos says that Ted Coerper remained a fixture at the restaurant even after he'd sold it.

"Over the last few years of Ted's life, he was a regular and loved seeing the place busy and growing."

A few years ago, Kalkounos – who is passionate about the history of the Five O’Clock and of restoring as much of it as possible – asked customers for their memories, and garnered an impressive response, including photographs from a 97-year-old customer who had held her wedding there decades and decades ago.

"It is amazing to see how Five O'Clock Steakhouse has been ingrained in customers' lives for generations," Kalkounos told OnMilwaukee. "We received stories of birthdays, proposals, weddings, acts of kindness and even one story of college roommates stealing leftovers."

Around the same time, an old mural, signed by painter H.J. Scharwick, was uncovered in the bar area. 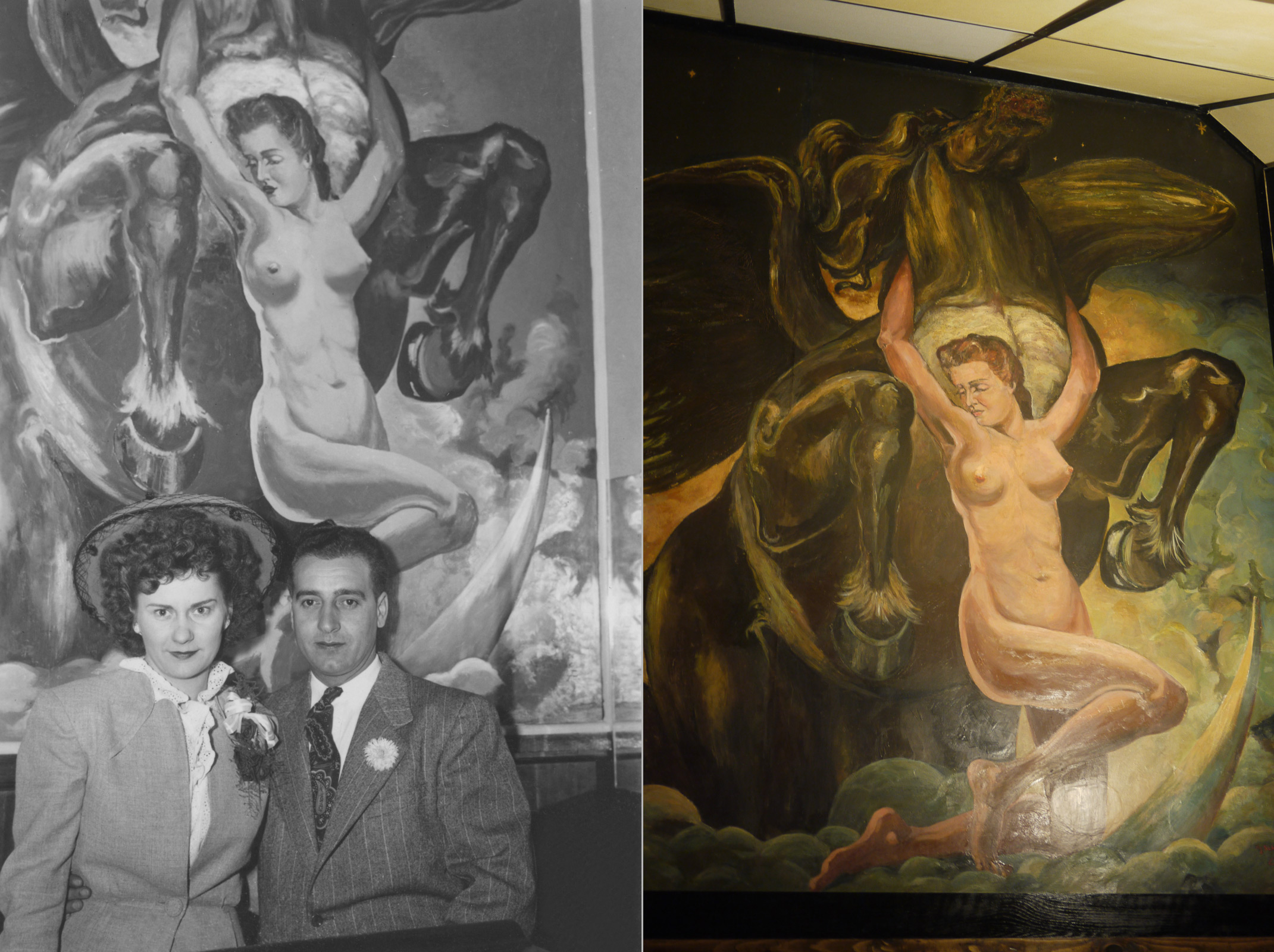 The mural (seen in then and now side-by-side images above), which shows a nude female figure with its arms around the neck of a black winged horse – both rising up from a cloud – had long been rumored to be hidden behind the mirrors on the walls of Five O'Clock bar. 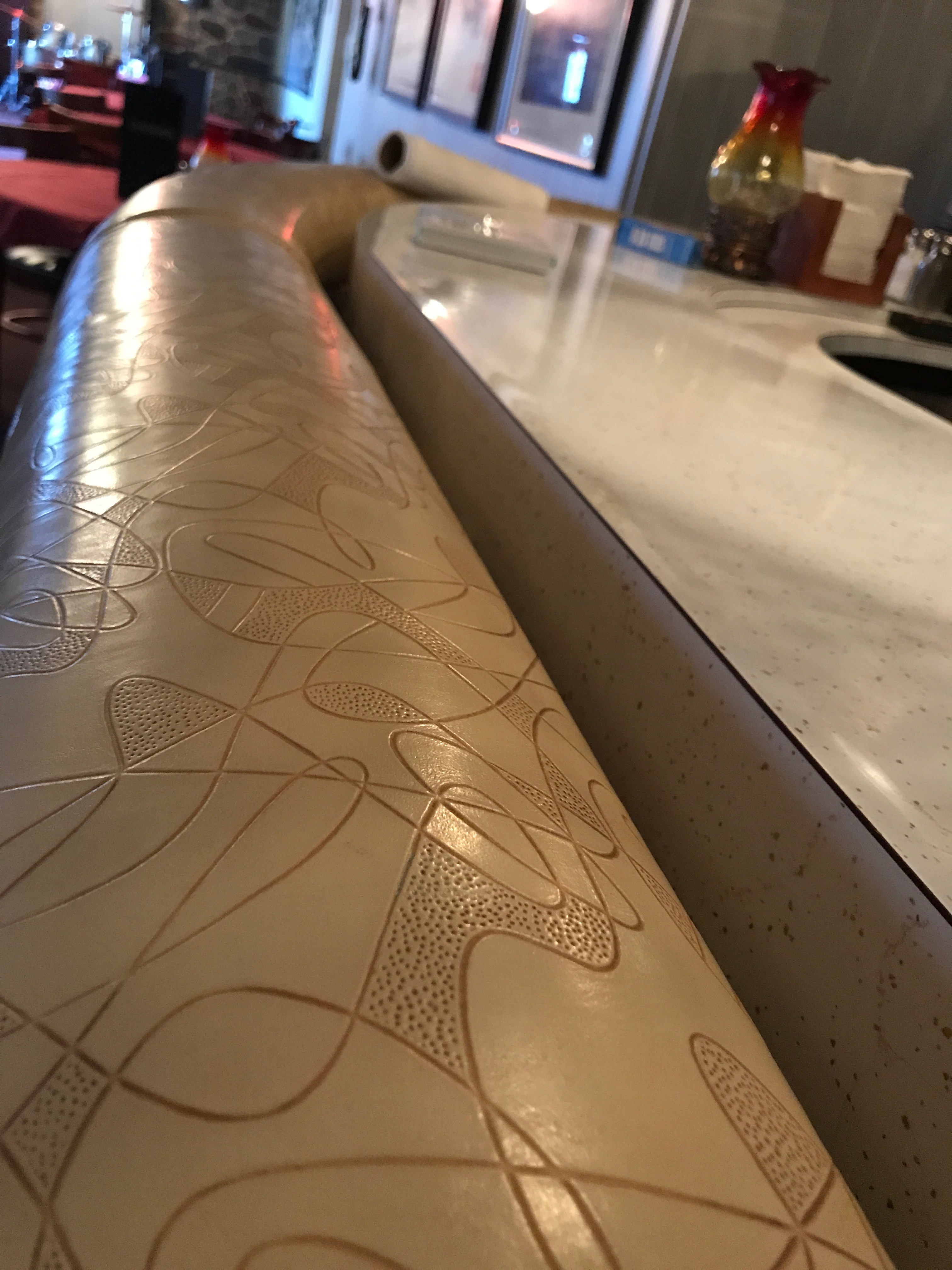 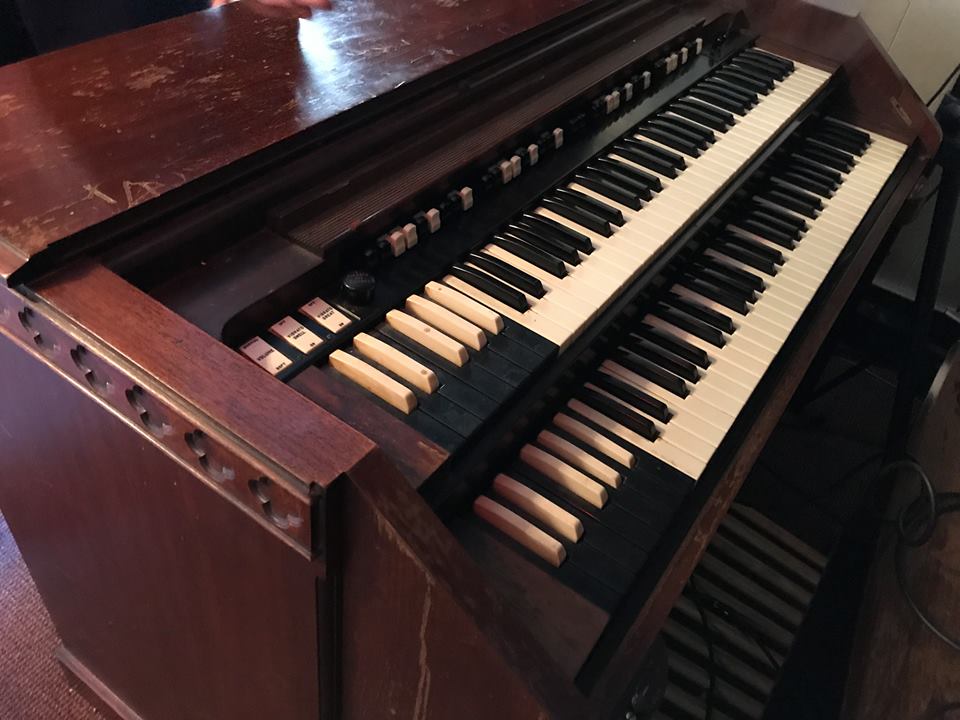 A few years earlier, Kalkounos – who is also a musician – reopened the Alley Cat Lounge, initially launched in the as a VIP room – where local organ star Chubby Neiland could often be heard, among others – bringing live music back to the space, which had closed in 1970.

Still the pinnacle of supper club steakhouses in Milwaukee, the Five O’Clock Steakhouse is also packed full of delectable history.

"My family took over this legendary business 15 years ago and have since passed it down to me, so there’s pressure to maintain the standards, and manage its growth," says Kalkounos.

"I feel it’s my duty to protect this Milwaukee landmark and help guide it through the next 30 years. The amazing thing is that we are experiencing record increases in covers and sales without compromising who we are. It is an honor to be the current steward of a thriving business that’s over 70 years old in the same location here in Milwaukee."