By the end of the Flaming Lips' flamboyant Friday night Summerfest set, frontman Wayne Coyne and company proved they don't need Carmex yet as these Lips aren't all dried up.

By Tedd Lookatch Special to OnMilwaukee Published Jul 07, 2018 at 1:46 AM Photography: Ty Helbach

Backstage at the Harley-Davidson Roadhouse, fearless Flaming Lips leader Wayne Coyne – in full stage wardrobe, purple fuzzy cuffs and all – appears. "I think I wanna go over and I think I want to meet Blake," he whimsically stated about the country star playing over at the Amphitheater. Small problem: Shelton was already on stage. It was not to be – at least this night.

Luckily for the fans, Coyne didn’t let it ruin his night – which he repeatedly called a perfect night to play. Not too hot, which is a good thing when your staging puts you in a plastic ball and hot lights. 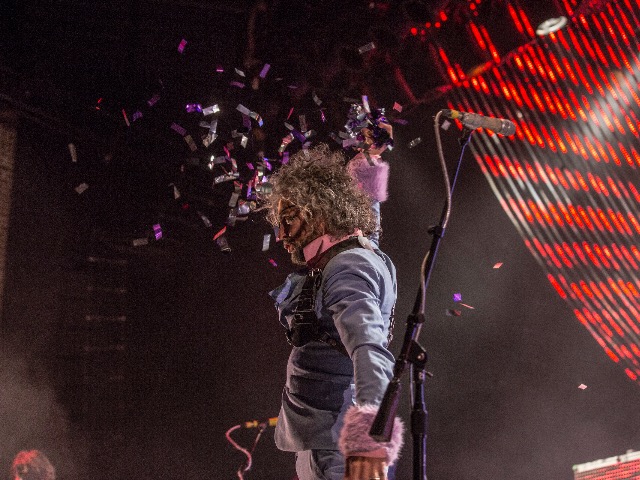 Reporting to stage promptly at 10 p.m., the show went on with a self-fulfilling version of Richard Strauss’ "Also sprach Zarathustra, Op. 30." The band exploded confetti bombs and unleashed a plethora of oversized balloons that strangely appeared to regenerate at points through the night. It was clear from the get-go that this was an orchestrated approach that would continue through the evening.

The crowd didn’t seem to care, drinking in the visual explosion of eye candy and lights Coyne’s road show has been tweaking for years. They followed that up with a giant "F*ck Yeah Summerfest" balloon, summoning an enthusiastic uproar from the crowd that almost seemed to dismiss the song "Race for the Prize" as something playing in the background. The amount of staging was extreme for a side stage. 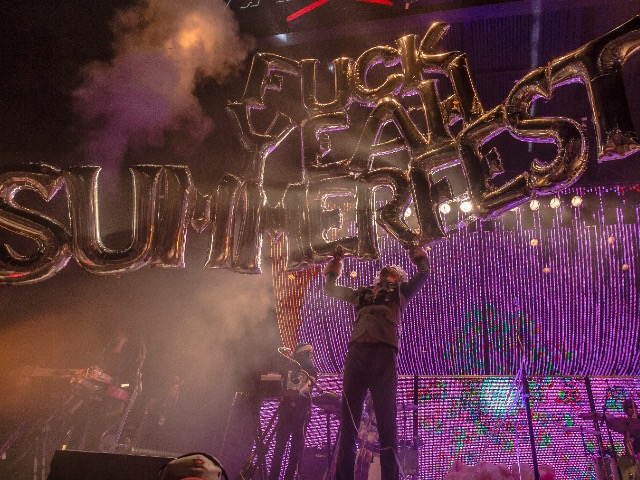 Not to be outdone, the giant robot on "Yoshimi Battles the Pink Robots Pt. 1" that dwarfed Coyne almost appeared surreal. He stopped the song and made audience participation mandatory. "This is the night you can all do a karate chop," Coyne commanded. "This song is about a cartoon science fiction doing the impossible, so I know you can do it."

The energy and pace only slowed when playing the cuts for their latest release 2017's "Oczy Mlody." During the intro to "The Castle," he apologized about the sad song coming – though it was a strong song, as was "How??," also from the album.

However, the crowd was more juiced up hearing the distorted take on "Star Spangled Banner," during which Coyne clapped oversized goofy hands. They also soaked up the Bowie classic "Space Oddity," with Coyne performing the chorus from his signature plastic hamster ball wheeled out on top of the audience. The band was a strong seven-piece, featuring two full drum sets and a balanced sound. And Coyne proved throughout the evening he could still hit the high notes. 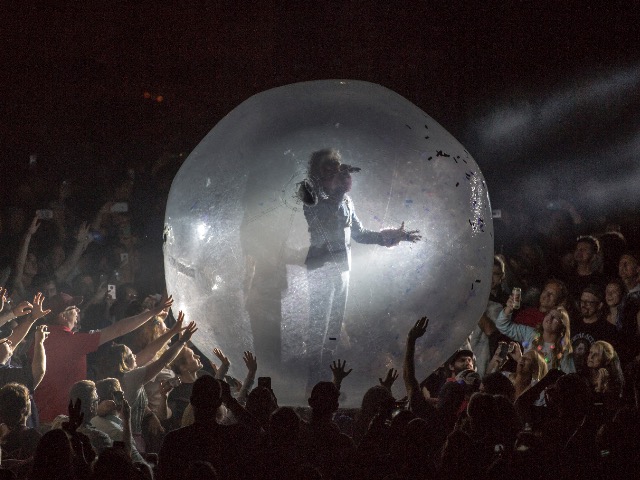 Coyne’s thirst for the unique and surreal ruled the performance. Waving his hand like a mad sorcerer among an eerie fog over the audience during "The Yeah Yeah Yeah Song" worked. Giant eye balls for "Are You a Hypnotist" and yet even more confetti on ‘The W.A.ND." kept the fans loud. Coyne would explain his incentive need for screaming: "I’m persistent about the screaming because I want a joyful audience. I know some of you out there are experiencing sadness. You may be changing the perspective of the person next to you by screaming." Certainly a unique way to view the world.

The sadness I experienced was from the band not playing "She Don’t Use Jelly," easily my favorite from its large catalog of hits. They did come out for an encore with another crowd favorite, playing behind a giant rainbow for "Do You Realize??" It was a slightly altered version that played well musically and for the fans.

At the end of the night, Coyne proved he doesn’t need Carmex yet as these Lips are far from dried up.