I'd compare Australian DJ Flume's rain-soaked Summerfest set to a wild water-chute log ride, but frankly, a water slide would be seem like the Sahara compared to the monsoon that struck the Miller Lite Oasis Stage Wednesday night.

I'd compare Flume's rain-soaked Summerfest set to a wild water-chute log ride, but frankly, a water slide would be seem like the Sahara compared to the monsoon that struck the Miller Lite Oasis Stage Wednesday night.

The storms struck throughout the entire day, but the true deluge – complete with a gross grey sky that you half expected some dementors from "Harry Potter" to start floating around – didn't begin until a little after 7 p.m. And it poured. And poured. And, just when you thought maybe the end was near, it poured some more. It was a parody of a rain storm.

Heaven's tap finally began to slow to merely a solid shower by showtime, but by then, the damage was done. You didn't bother to wring out your clothes after a while – that was a lost cause – so you made fists and wrung your hands out like sponges instead. Merely tapping one's foot to the beat was a struggle since your clothes had suddenly gained 50 pounds of water weight in an hour – and if you tried going down a layer, well, a frosty breeze was there to greet you. Looking around the young summer-prepped crowd, I was surrounded by future hypothermia cases.

So that's what the Flume – making his Milwaukee debut – was up against. But even with Mother Nature's thunderous theatrics threatening to steal the spotlight, the DJ – and his youthful, energetic crowd – was up to the task.

Briefly opening with the vocal-free "Helix," a giant flag of one of his clean, multi-colored flower designs dramatically dropped away to reveal the Australian EDM hitmaker at neon-lit, geometrical table, with a eye-tricking display of glowing cube outlines hanging above his station and a video wall backlighting his set with images of trippy carnations, artsy colorful weapons and, by the end, a couple sharing a passionate kiss. It may have been a gray day, but at least Flume brought some brightness. 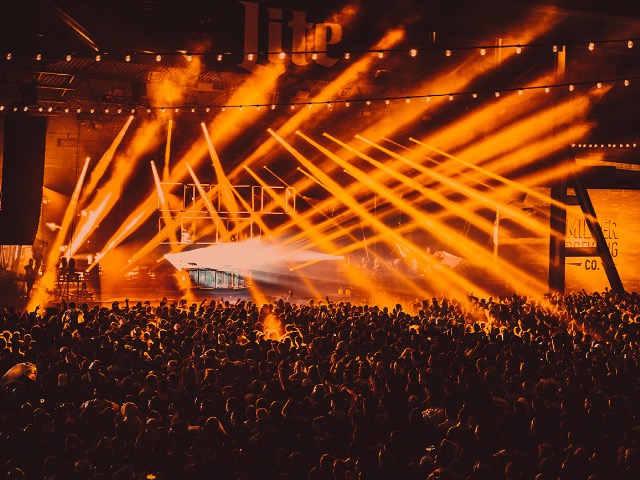 While a solid light show spectacle should be no surprise from an EDM performance – you'd walk out if it didn't have at least 15 crazy strobe lights interludes – Flume's music is more of a curveball than the predictable builds, usual wobbling bass drops and familiar formulas of some of the industry's bigger names. Instead, the Aussie is willing to throw a relatively chill sonic jam party, building unique and natural sounds that don't bludgeon the audience but sure get the head bobbing up and down – for instance, with the smooth bass and "In The Air Tonight" drum riff of his cover of Major Lazer's "Get Free," the early grooving combo of "Hyperreal" and "Heater," or the soulful poppiness of his major hit, "Never Be Like You."

It took a while for Flume to really start churning out with some traditional bangers, stuff that got the soaked crowd thrashing arms and heads. In fact, it wasn't until around the 50-minute mark – around the time the setlist reached "Smoke and Retribution," "Slasher" and "Core" – that it really seemed like he brought the kind of unapologetic crazy crowd-pleasers some might've expected. And yet the dripping fans also never seemed bored or disinterested, instead always willing to follow down whatever sonic path his remixes chose (though it helped to have his hits, "Never Be Like You" and "Say It," nicely scattered throughout).

While some EDM shows (*coughs* DJ P Hilty *unconvincingly coughs*) threaten to become just homogenous walls of sound, with Flume Wednesday night, there was something new in each track – the almost industrial energy of "Wall F*ck," the neon brightening of his remix of Lorde's "Tennis Court" (fittingly accompanied by a royal crown on the video screen), the bleep bloops of "Smoke and Retribution" – to keep one interested in the music beyond just dancing around in the damp dark.

And though he might not have been the chattiest MC – little more than the typical, "How are you doing, Milwaukee?", "Are we having fun, Milwaukee?", maybe saying Summerfest to mix it up – Flume kept the crowd engaged with his stage presence and clear actual performance. This wasn't just a "press play and pump fist" show, as the Aussie was clearly mixing and working with the material on the stage, as well as pummeling on some drum pads for "Get Free" and especially the finale, "Free."

For some, the 70-minute set might've felt a little short – especially considering the typhoon endured while waiting for the show – but overall, Flume made it easy for the audience to forgive that their clothes won't be dry until probably August.