Fond du Lac - or should I say "Fond DOO Loch" - was the center of a "Saturday Night Live" skit this past weekend. And I don't know if you guys have heard this before, but did you know our accent can sound kinda goofy?

"Saturday Night Live" may have scored some laughs with their fake Donald Trump ad that basically straight-up called the candidate's supporters Nazi racists (nice try, "SNL"; we haven't forgotten that you let him play big shot a few months back). However, the general consensus from Saturday night's Jonah Hill-hosted episode was that it sucked. A part of that suckage: this "Fond du Lac News" skit.

Looks like somebody in the "SNL" writers room finally finished watching "Making a Murderer"! 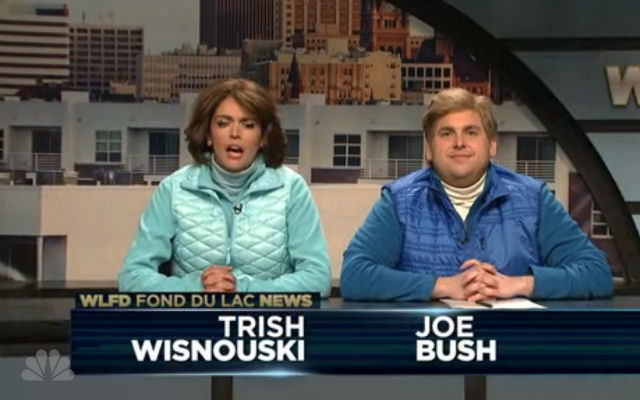 Indeed, our accents are pretty goofy – and most of the cast does a passable job recreating them, "Fond DOO Loch" pronunciation not withstanding – but I'm pretty sure "Fargo" generally covered that ground pretty well almost two decades ago, not to mention the "Making a Murderer" spoofs two months ago. At least Jonah Hill seems to be having a good time – plus, he survived that black hole of deathly silence that was Cecily Strong's drowning neighbor gag.

Maybe I'm being a little harsh on "SNL" and this bit; this past weekend was a bit of a hiccup after all, as they've actually been pretty funny recently (I mean, that Beyonce skit from a few weeks back? On point). But this was weaker than the thawing ice on Lake Michigan right now. Our accents may have been the joke, but only their own mispronunciation was worth much of a laugh.