Headlining the Miller Lite Oasis the day before the Fourth of July, Foster the People delivered the kind of experience that makes me love concerts: a sense of discovery, coming into a show maybe only knowing a few songs and walking out craving to hear more.

On Tuesday night, alt rockers Foster the People played my favorite set of Summerfest so far.

It wasn't the flashiest performance, nor the one with the most hits or the longest set. It wasn’t intimate or even remarkably personable. But headlining the Miller Lite Oasis the day before the Fourth of July, the Los Angeles-based rockers delivered the kind of experience that makes me love going to concerts: a sense of discovery, coming into a show having a certain set of expectations from a band (or maybe only knowing a few songs) and walking out immediately craving to hear more, turning a casual listener into a straight-up fan.

I’ll admit it: Going into Tuesday night, my frame of reference – and likely the one for most of the hearty gathering at the Oasis – for Foster the People was the band’s two major radio hits: 2010’s "Pumped Up Kicks" and its current airtime favorite, "Sit Next to Me." Considering those tracks, you’d maybe expect a night of poppy tunes and bouncy hits.

Foster the People instead brightly blew up those expectations like the Fourth of July fireworks lighting up the sky over Lake Michigan as the band took the stage. Playing an unpredictable collection of catchy songs veering all over the world of rock – from slick synthy rock to funky grooves to classic Americana rock to punk and psychedelic rock and even a little disco inferno – Foster the People played the kind of set that earns unballyhooed songs new ears and wins a band new fans. Or at least certainly one new fan right here. 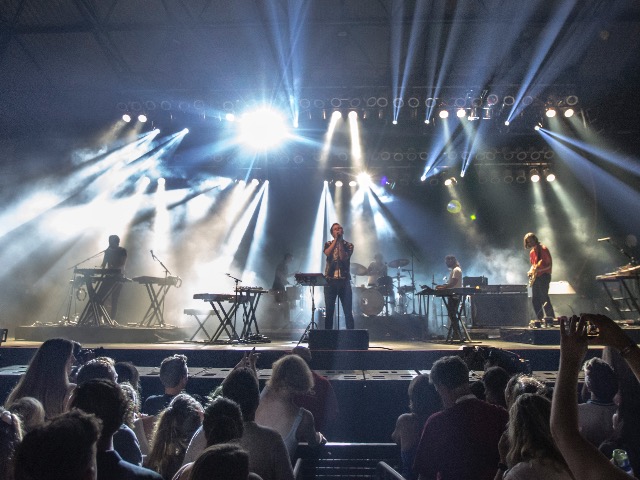 Emerging from a cloud of smoky fog, lead singer Mark Foster and company began the night with the poppy "Houdini" – an all-too-fitting opener considering the title magician’s Wisconsin roots – and the cascading electronic rhythms and building synths of "Are You What You Want To Be?" and "Pay The Man." The band was battling the exploding fireworks in the background for attention for the first few songs, but it wasn’t much of a fight.

Thanks to the catchy tunes and Foster’s slick and smooth dance moves across the stage – call him Thanksgiving because he was serving up the Mashed Potato all night – most of the festival goers in attendance seemed to forget there was an awe-inspiring, gunpowder-fueled light show going on behind them in favor of the musical showcase taking place.

After the funky groove of "Helena Beat," the band departed from the perfectly mixed, MGMT-esque synth-happy sound expected from the hits and began moving deeper into rock territory. "Coming of Age" almost sounded like a lost Petty track, putting its soaring riffs and strutty rock guitar sound forward, while the next selection, "Waste," cooled things down a bit.

The chill didn’t last long, however, as Foster the People burst into its punk-inspired portion of the evening quickly after with "Don’t Stop (Color on the Walls) – an easy contender for a song you’ve definitely heard before but didn’t realize came courtesy of this band – and the growling, in some cases even howling "Lotus Eater." The band continued its energetic descent into harder rock with the psychedelic "Pseudologia Fantastica," bursting to life with a calvacade of bright colorful stage lights that turned the song into an ominous Dario Argento-esque nightmare.

The band continued to rock through "A Beginner’s Guide to Destroying the Moon" and "Doing It For the Money" before brightening things up quickly with the poppy, stompy almost hip-hop-inspired "Loyal Like Sid & Nancy" – complete with a little spoken word bit for one of the verses.

Speaking of, well, speaking, Foster spent most of the night pretty low-key behind the mic as far as interactions went. Save for a brief note about how this was the band’s first Summerfest and the occasional "Let me see your hands!", the music did most of the talking. Thankfully Foster’s smooth dance moves (a dead ringer for recent Oscar winner and dance fiend Sam Rockwell), stage-roaming energy and general rock star swagger kept things personable.

Not every band can bust out "Blitzkrieg Bop" and come out alive on the other side, but thanks to Foster’s low-key confident charisma, they didn’t insult the Ramones too badly (though my punk-loving compatriot for the show harrumphed that the order of the song wasn’t correct, so burn it all down, I guess). 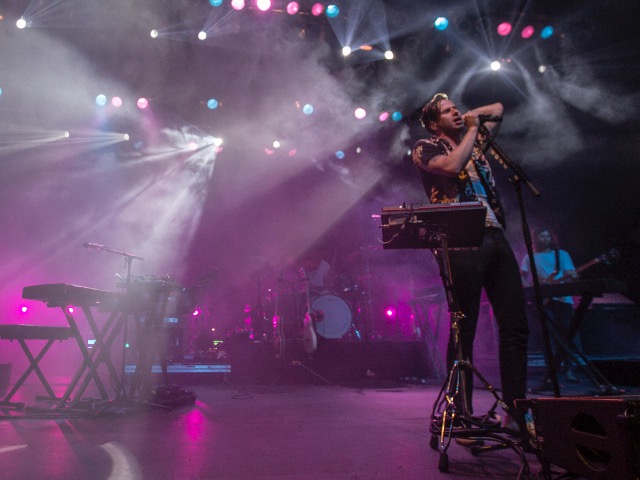 After a night of minimal conversation, however, headed into the final song of the evening, Foster dove into a soliloquy, thanking the loud crowd and then those serving the country, from veterans to teachers and first responders, before railing into the U.S.'s current immigration debate, noting we're all immigrants and "some people think they hit a triple but actually just got walked to third base."

It was a strong sermon, scoring cheers from the young crowd – though by the time he reached a well-intended but confused final statement about he, as a privileged straight white male, being various persecuted minorities, a return to the music was about due.

And what a return it was, ending the regular set with the disco funk groove of the band’s current radio hit, "Sit Next to Me." A fine ending – though the crowd chanted demanding a return, in particular "Pumped Up Kicks," the band’s first major hit. And after a brief pause, an on-stage vape from Foster and a bonus tune in "I Love My Friends," Foster the People obliged the crowd with a rendition of the peppiest song ever made about a school shooting.

For some acts, it’s a slog as a casual fan to get to the hits, realizing there’s a reason why The Powers That Be selected one song above all others to become notable. Foster the People’s 80-minute Summerfest set was the opposite, providing electric evidence that there’s more to hear in this band than just its biggest hits – and providing ample encouragement to head home immediately afterward to listen to those new discoveries again. And again.

"Houdini"
"Are You What You Want To Be?"
"Pay The Man"
"Helena Beat"
"Coming of Age"
"Waste"
"Don't Stop (Color on the Walls)"
"Lotus Eater"
"Blitzkrieg Bop" (Ramones cover)
"Pseudologia Fantastica"
"A Beginner's Guide to Destroying the Moon"
"Doing It For the Money"
"Loyal Like Sid & Nancy"
"Sit Next to Me"

Encore
"I Love My Friends"
"Pumped Up Kicks"