Part of an ambitious project to redevelop a chunk of industrial land on Mequon Road includes construction of the Foxtown Brewing Co., 6411 W. Mequon Rd., in one of the oldest surviving brewery buildings in southeastern Wisconsin.

Part of an ambitious project to redevelop a chunk of industrial land on Mequon Road includes construction of the Foxtown Brewing Co., 6411 W. Mequon Rd., in one of the oldest surviving brewery buildings in southeastern Wisconsin.

Foxtown – slated to open to the public on Nov. 6 – will also include a nearly 7,000-square foot beer hall and restaurant, and will form part of a 17-acre "town center" with residential units, office space and retail. 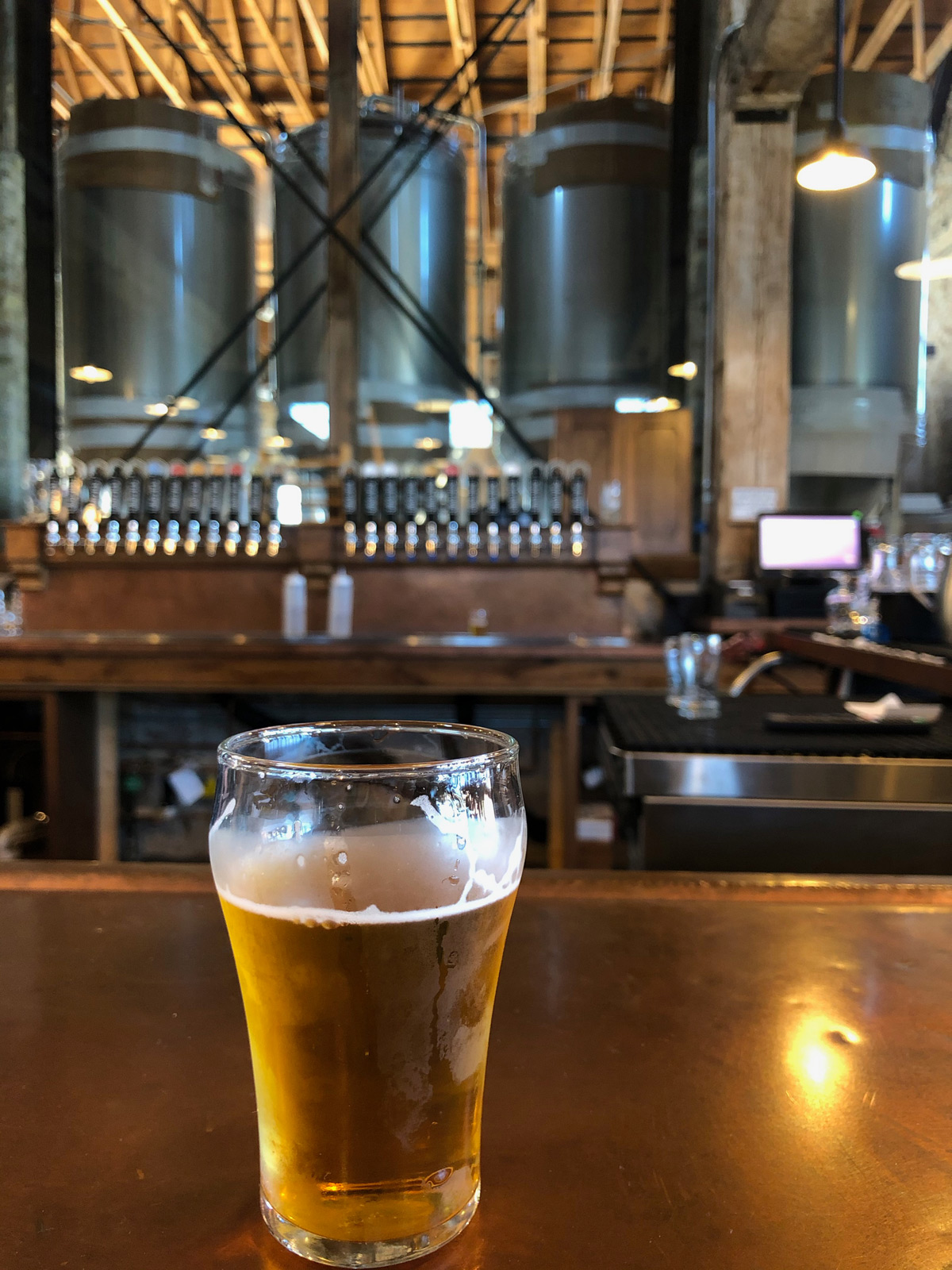 Like a number of Milwaukee-area brewers, Foxtown got an early boost from the Barley to Barrel incubator program, starting out as a group of homebrewers working on a small pilot system where the brewery is still doing research and development.

Those brews are then scaled up by head brewer Nate Bahr, who had been brewmaster at The Bavarian Bierhaus, at Foxtown’s seven-barrel system in Germantown. The brewery is prepped to allow for expansion to a 30-barrel system and will serve as Foxtown’s production facility. 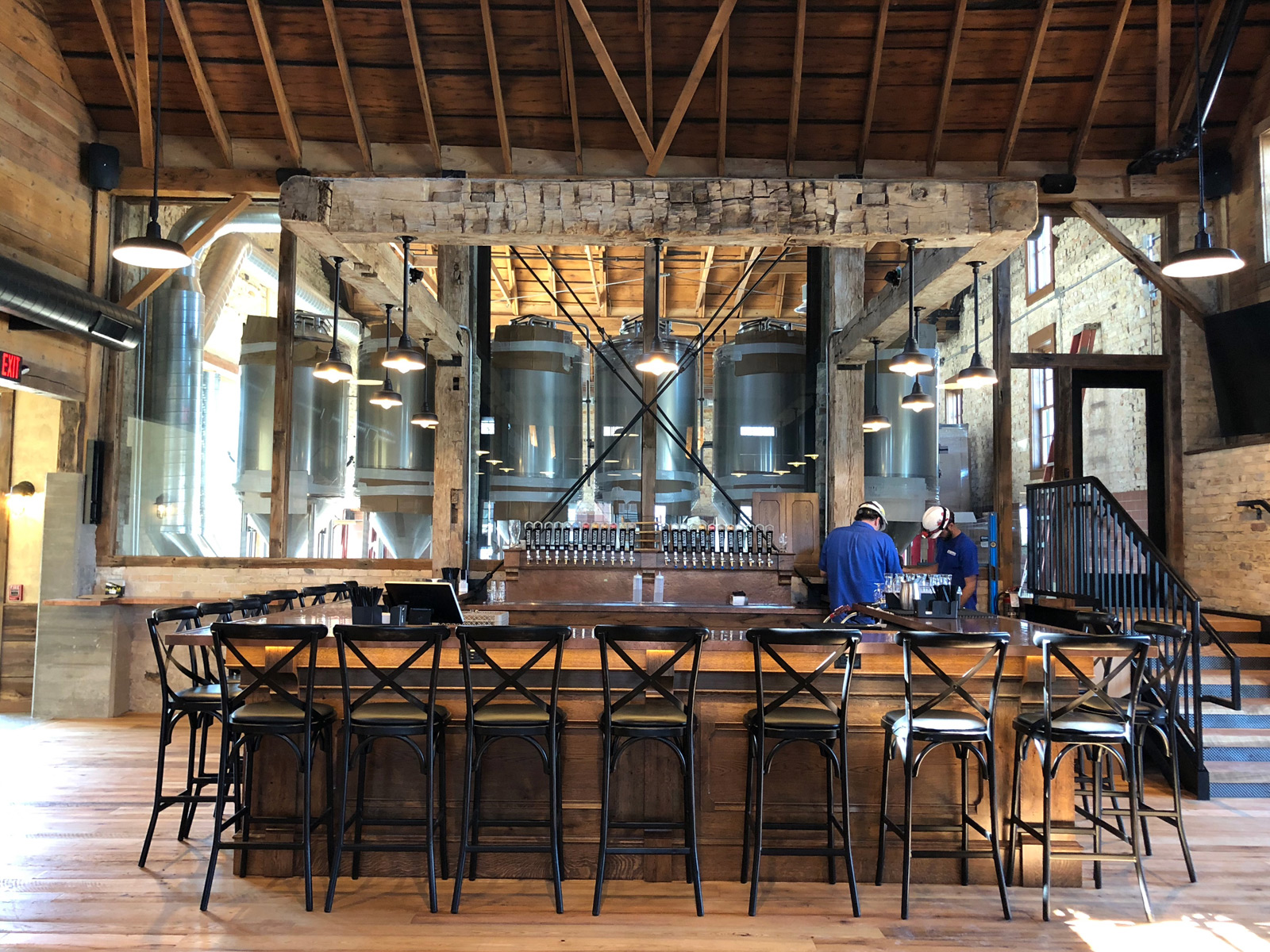 A canning line is already installed there.

An on-site brewery, expected to be up and running in about six months, will bring another seven-barrel system online. 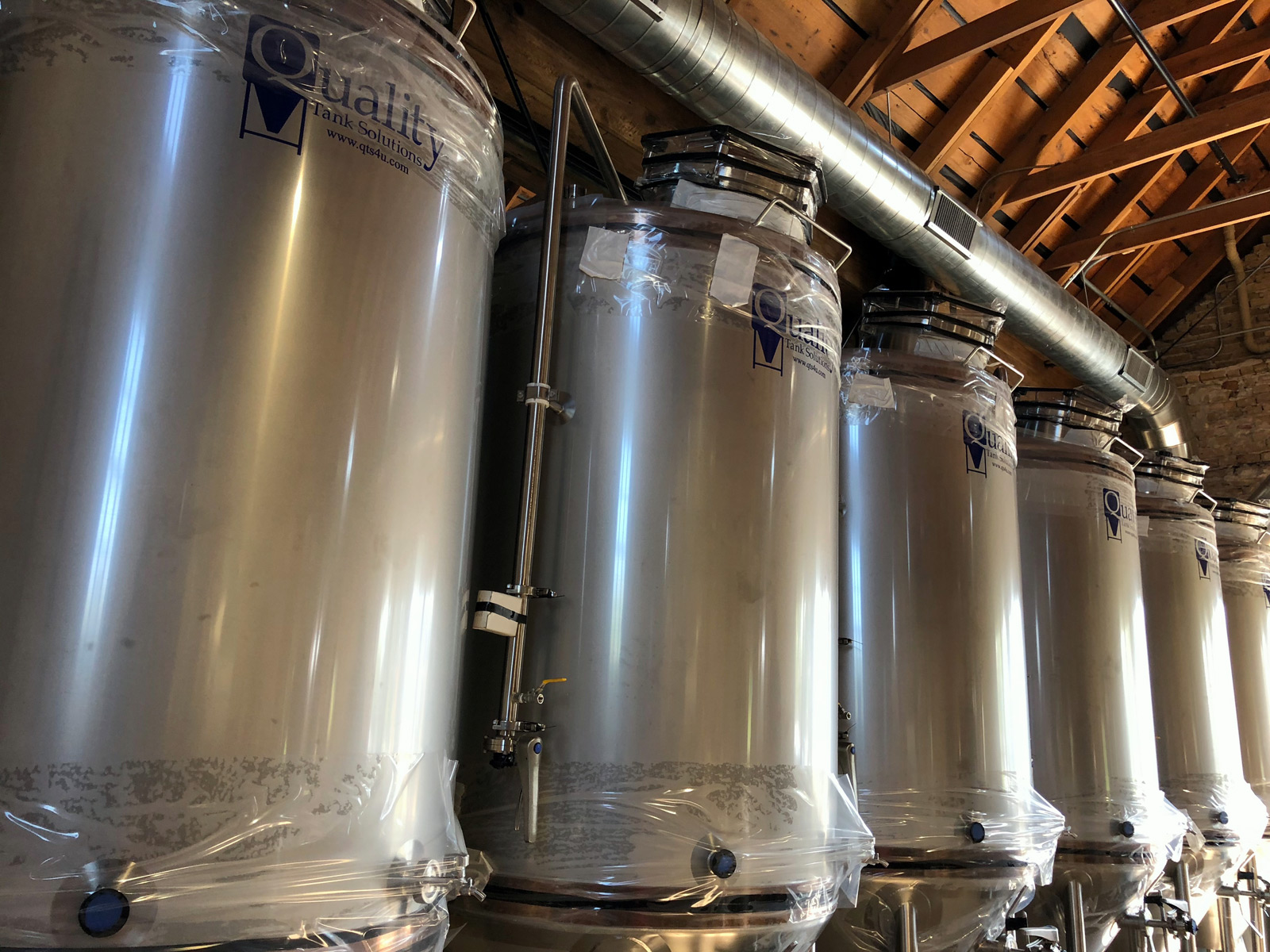 In an early online post, Foxtown said it was, "focused on creating high quality ales and lagers," and that is reflected in the first eight beers represented on the 24 lines at the new bar. There’s an American pils with a nice bite, and a pale ale that has bright citra and mosaic hoppiness, but a drinkable 5.5 percent ABV. 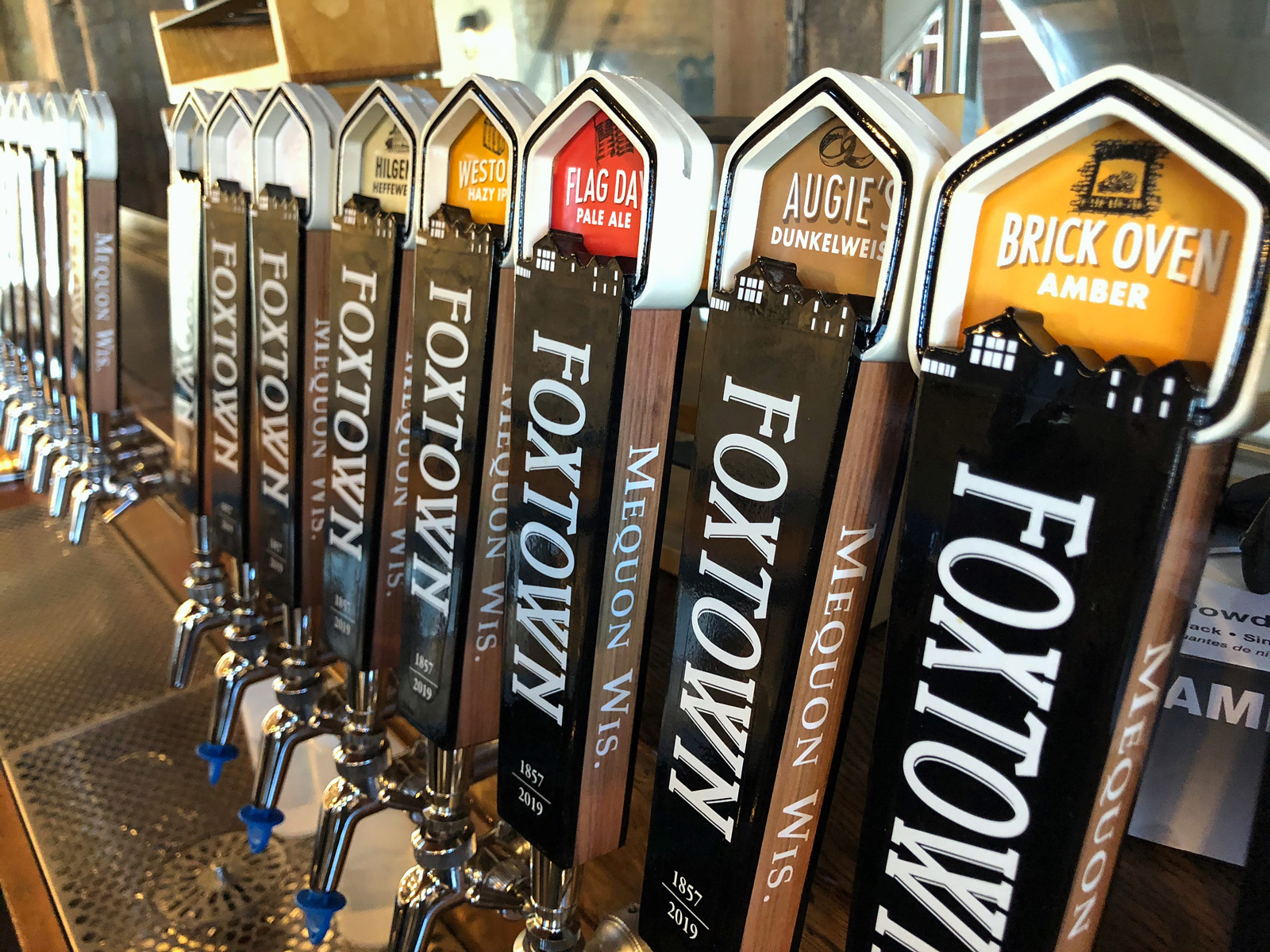 The brewery, taproom and restaurant occupy a series of connecting buildings that date to 1857, 1868, 1869 and 1870 and are quite stunning, with exposed hand-hewn structural beams, cream city brick and, in the 1857 building, rafters made from tree trunks that still have some of their bark! 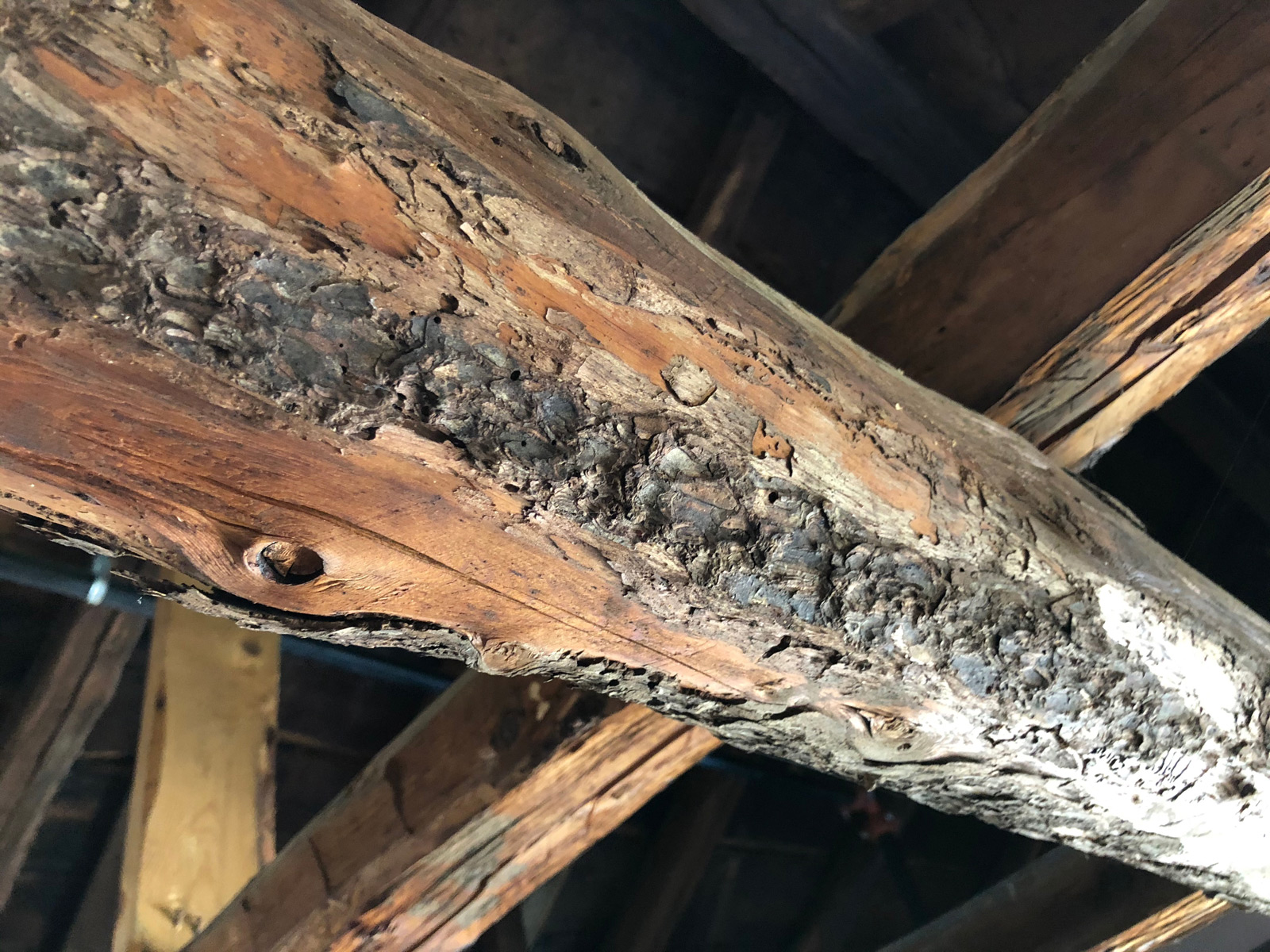 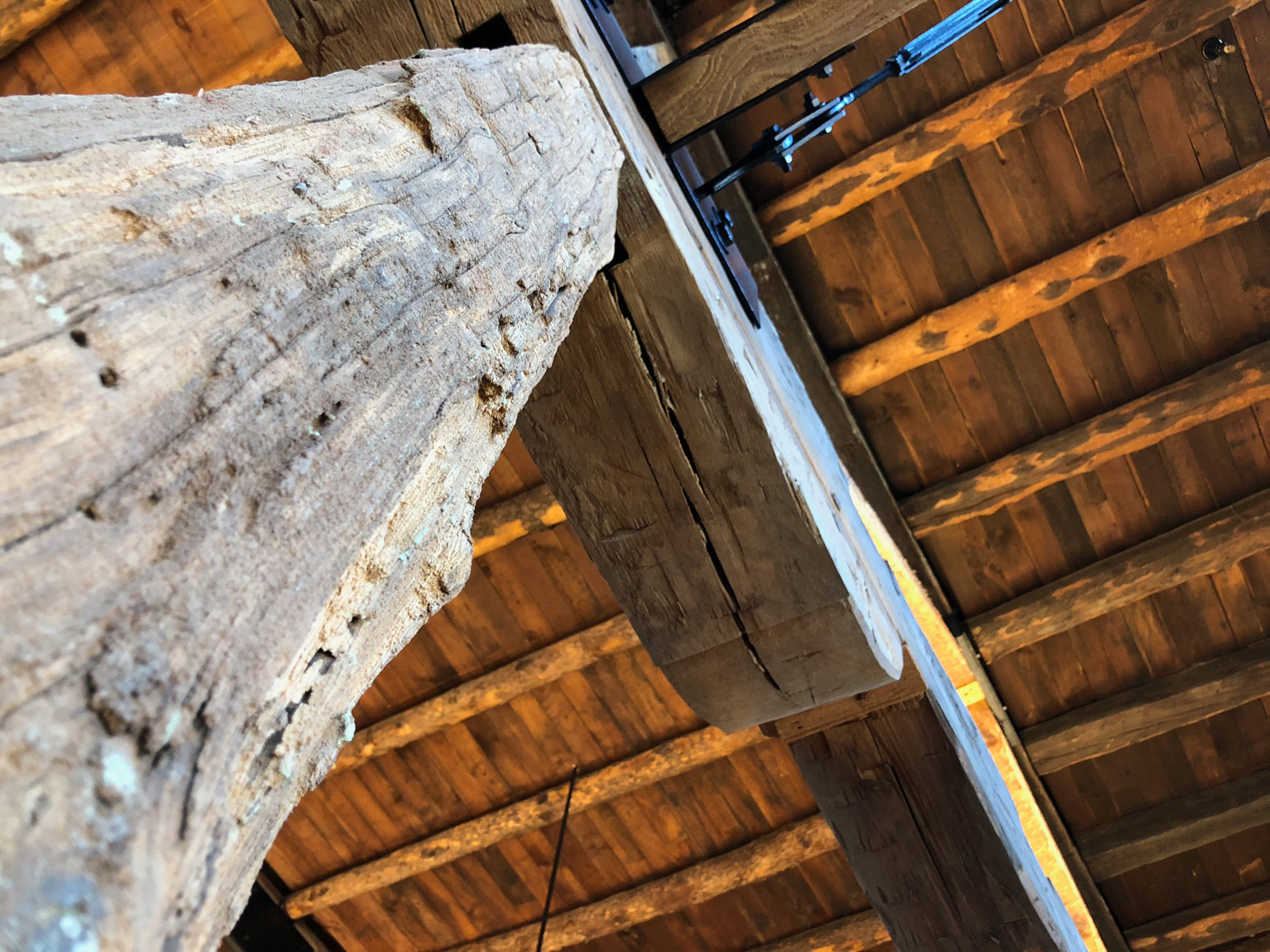 "The bark's still on the beams from 1857, so it's really neat," says Smith. "Obviously, we added some structure, but the majority of the larger stuff is all original because that was some pretty dense, heavy, green wood back then. It wasn't really going anywhere.

"It's really fascinating to see all of this is still here after so long. (Owner) Tom (Nieman) did a good job restoring it. ‘Remodel’ is not the word we like to use. Restoring means you bring it back to what it needed to be. All this was covered up."

As Foxtown uncovered the fascinating original structures, it also dug up some great area brewing history. 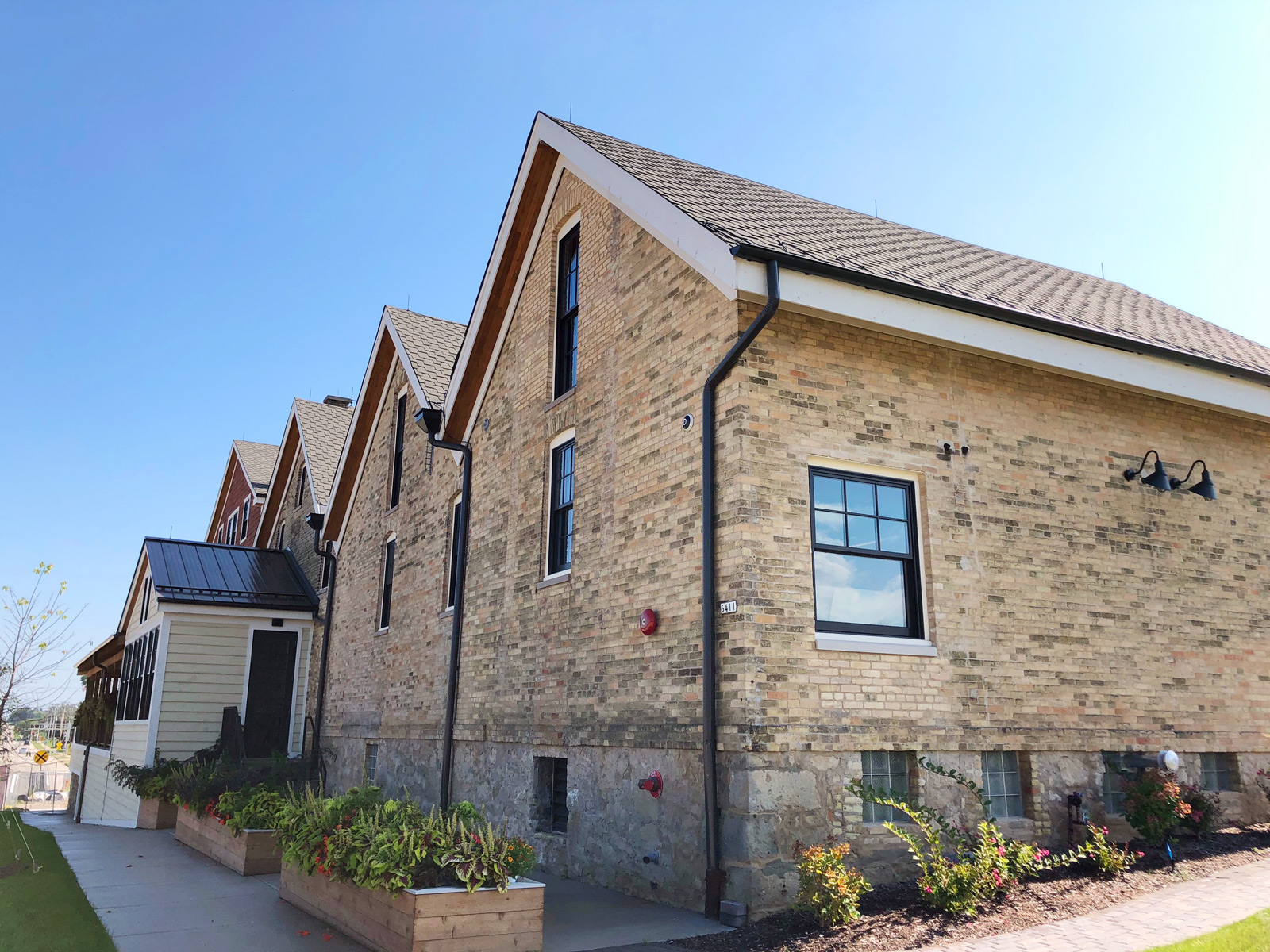 Carl Wilbert’s "History of the Town of Mequon" noted that the area boasted a trio of breweries back in the day.

In addition to the Adolph Zimmerman and Opitz Brewery, Leonard Bodendorler had a brewery on near Swan and Mequon Roads and the Engels Brewery was located in Thiensville.

Born in Germany in 1812, Adolphus Zimmermann immigrated to the Milwaukee area in 1839, where two days after he arrived, he maried Frederick Opitz, who arrived with her family on the same ship as her new husband.

Within a week, the entire clan was living in Mequon, where Zimmermann bought 160 acres of land – his in-laws snatched up 160 more acres nearby – and worked as a farmer for 16 years before moving into town. 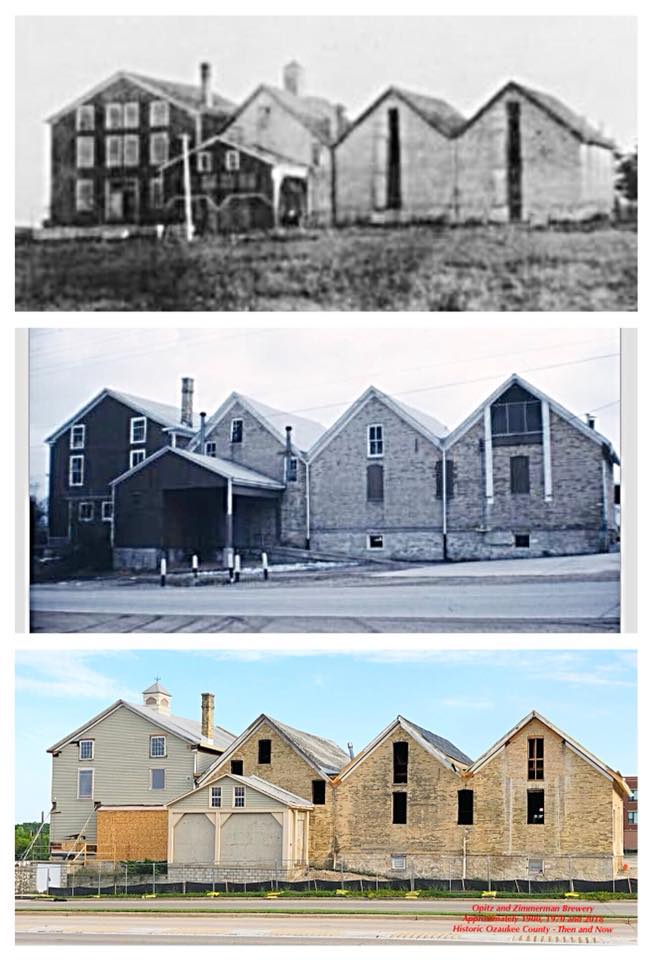 The buildings through the years. (PHOTO: Courtesy of Historic Ozaukee County/Facebook)

In 1857, Zimmermann and his brother-in-law William Opitz opened the brewery in newly constructed buildings – some of which are being converted into Foxtown.

Both successful businessmen on the frontier, Zimmermann and Opitz became involved in politics. Both men served in the State Assembly and in various more local positions of power. 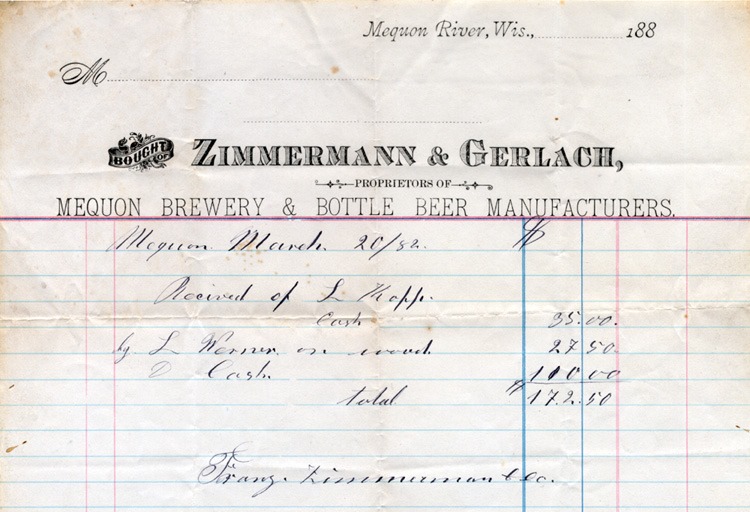 In 1858, Opitz left the brewing business and Zimmermann continued on his own until 1876, when he leased the facility to his son Franz and Mequon-born August Gerlach, who had married Zimmermann’s daughter Emma. 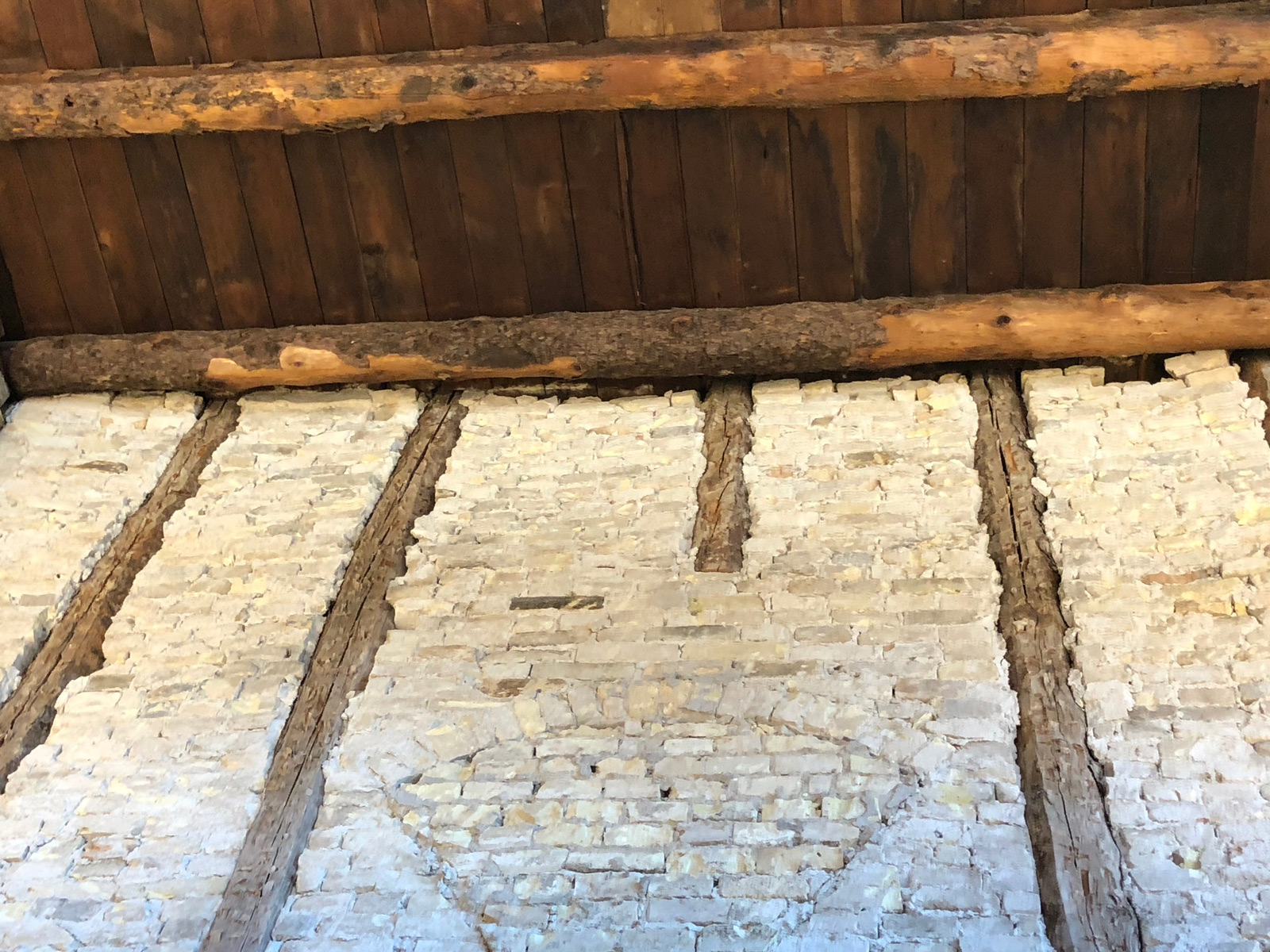 You can see evidence of this production in the buildings today. An upper floor, now removed, from the 1857 building was a malting area and an opening in the wall allowing the malt to be sent straight down into the mash tuns is still visible.

The two western-most parts of the complex were built as ice houses, in 1868 and 1869. A structure – where the bar is now located – was added in 1870 to connect the ice houses to the brewery.

Gerlach took over the business in 1884 – renaming it Mequon Brewery – and operated it until 1902, when his son Frank took control. Gerlach’s sons later became distributors for Blatz in Waukesha County.

According to Doug Hoverson's "The Drink That Made Wisconsin Famous," Wing’s Directories show that there was a bottling operation by 1884 and a malthouse by 1887.

Opitz died at home in Grafton, where he had moved in 1866 after purchasing a 200-acre farm, in 1882 and Zimmermann passed away nine years later.

For a time, Jung Brewing used the buildings as a distribution center, says Smith. Nieman believes that was immediately following Gerlach’s tenure.

But brewing didn’t end with Gerlach’s departure, it seems.

In July 1926, federal "dry agents," enforcing Prohibition laws, raided the "wildcat" brewery, which, according to the Milwaukee Sentinel, "had the appearance of a roadhouse" but was, in fact, "facilities for brewing 4,000 gallons of beer," including barrels, filters and, "a cleverly hidden loading platform that made possible loading of trucks while motorists traveled the road."

The buildings have since been used by the Kelch plastics products, which is a branch of Bemis Manufacturing, and by a variety of other businesses, too.

More than a century later, brewing is coming back to the old Zimmermann and Opitz site. 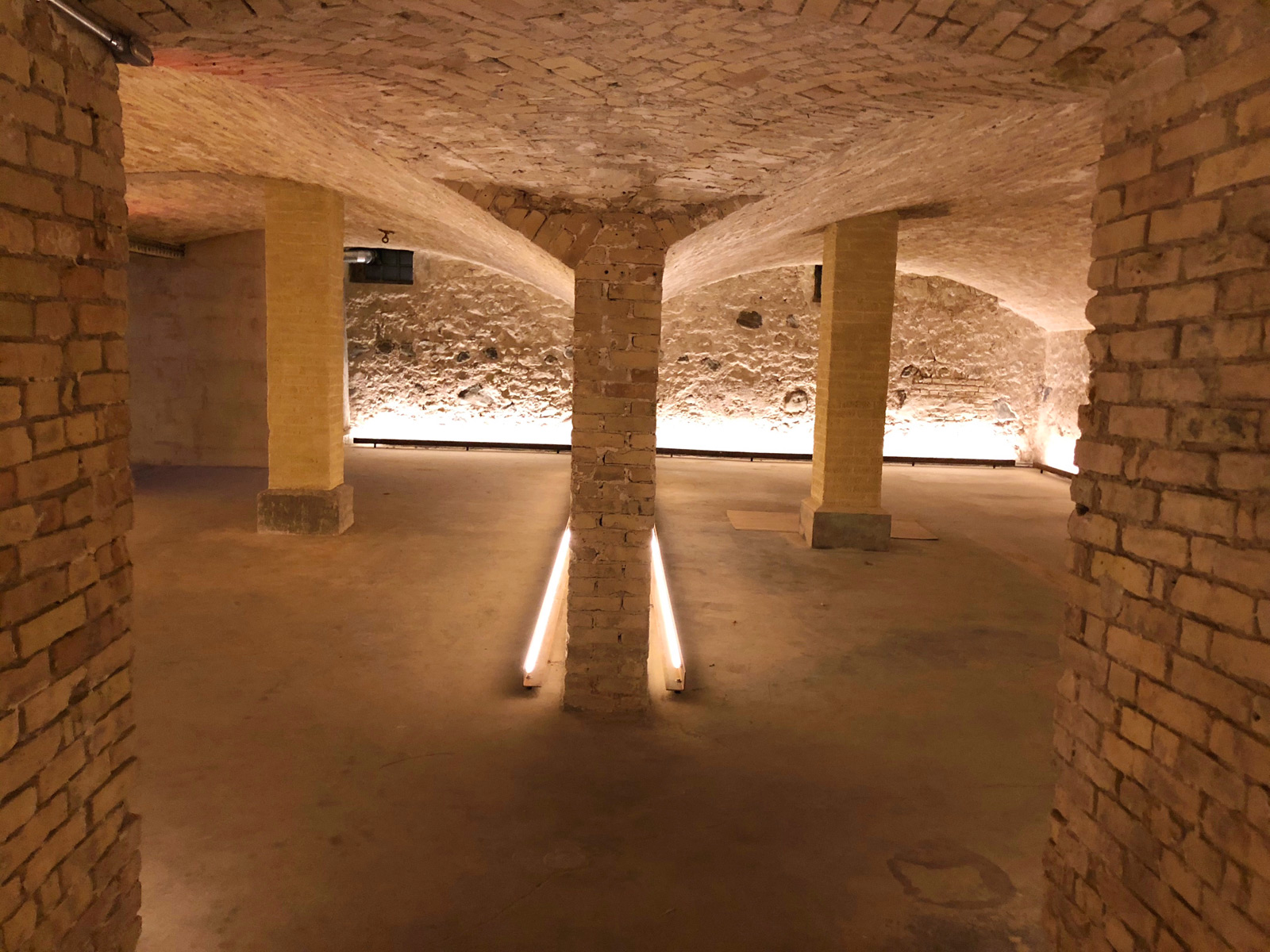 Most exciting are the two levels of barrel-vaulted, cream city brick lagering caves that not only still exist underneath the brewery buildings, but that Nieman has also restored, removing a layer of green paint, adding evocative uplighting and building a staircase between the two levels, which each has an exterior entrance.

There's also a well for water and an old brick oven down there (both pictured below). 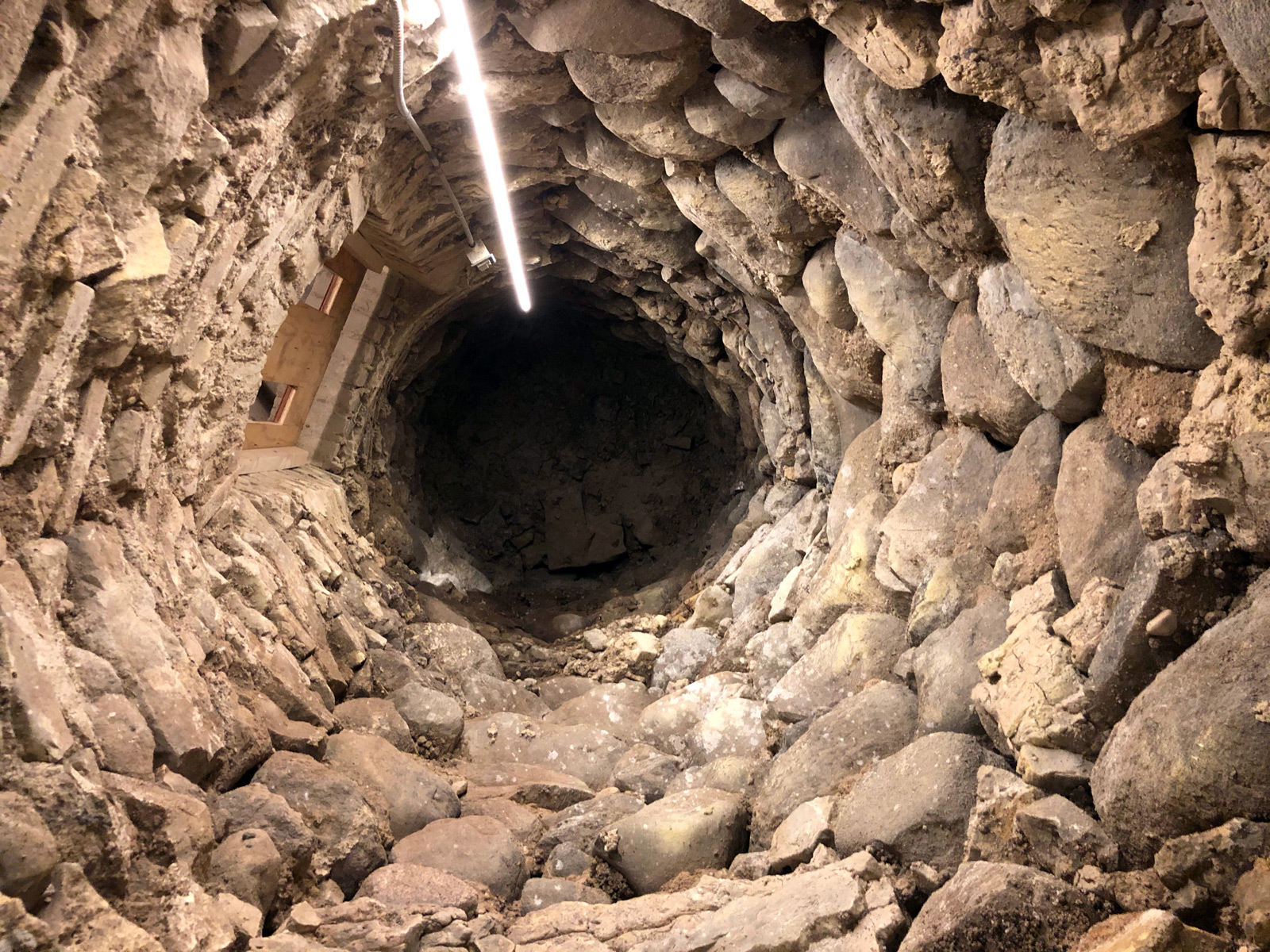 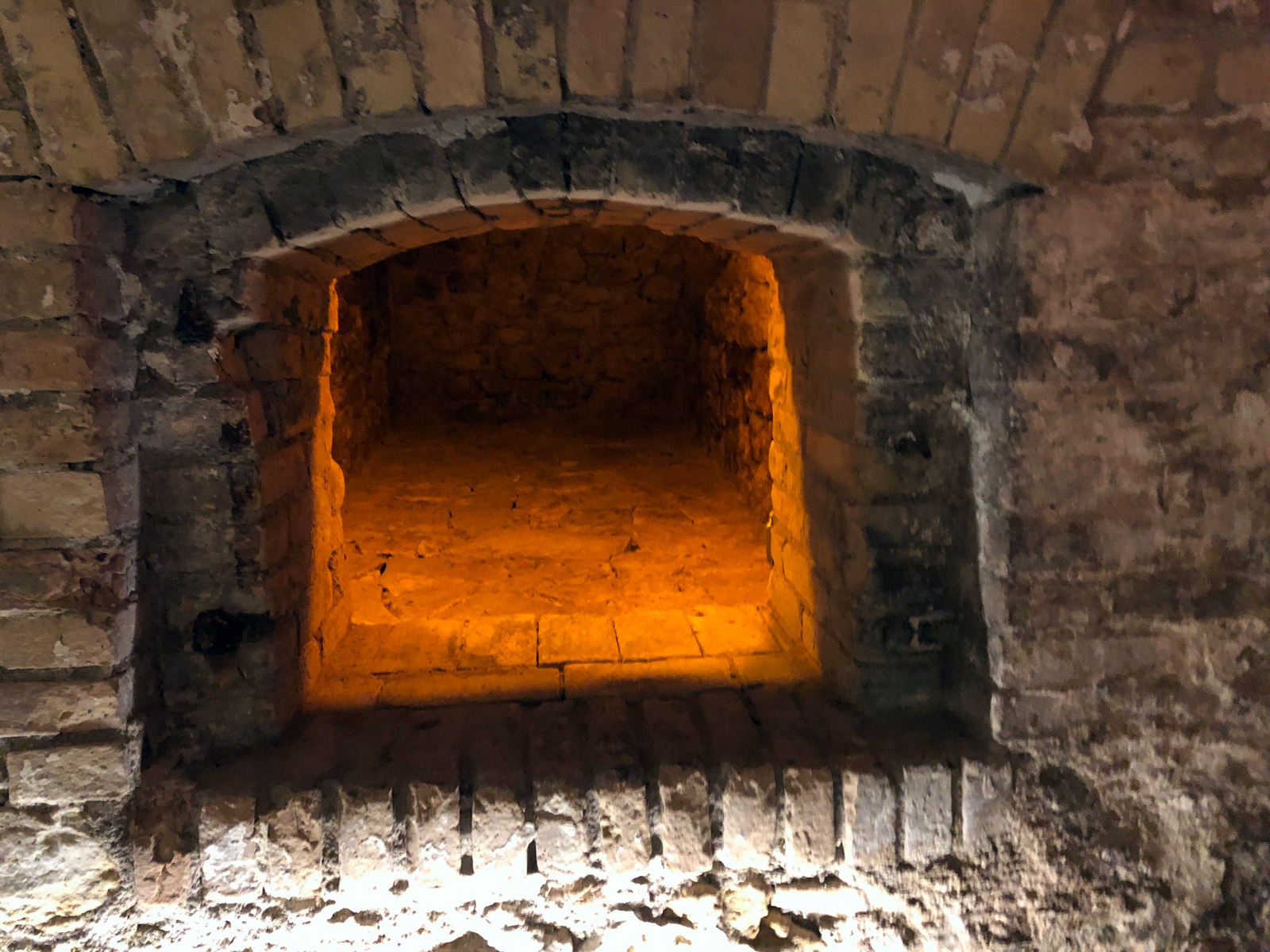 The former Gettelman Brewery building that survives on State Street in Milwaukee dates to 1856 and its lagering caves were recently demolished.

Lagering caves – the earliest of which were built in 1850 – still exist at Miller Brewing, across the street and to the east, as well as at the dilapidated former Falk Brewery on South 29th Street. Some of the Falk caves still exist. 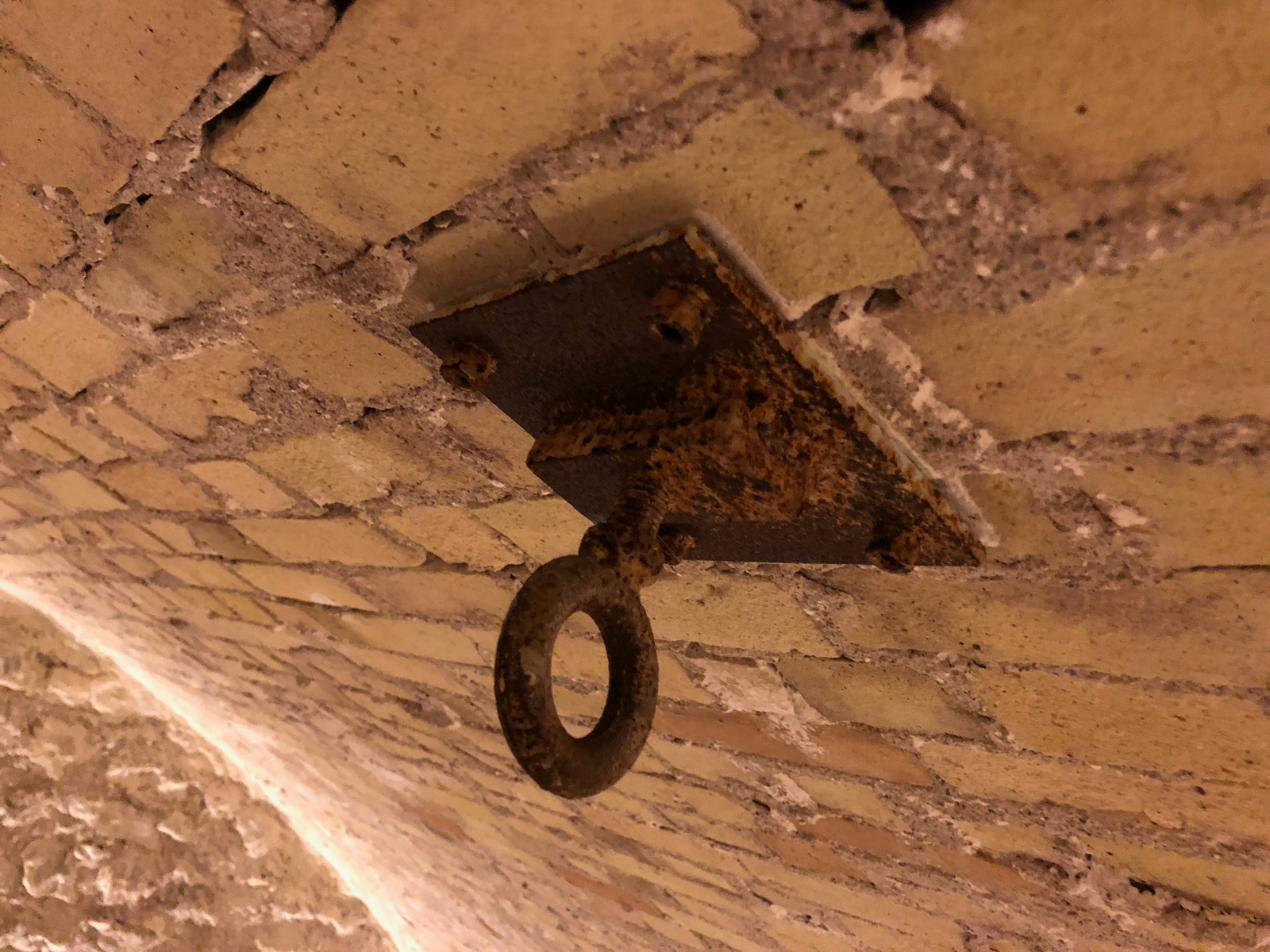 "This treasure was just sitting here," says Nieman, who is part of two deep-rooted Mequon families – the Niemans and the Fromms. "I knew I had to preserve it."

You’ll be able to enjoy it all beginning Nov. 6, when the brewery and restaurant open to the public. 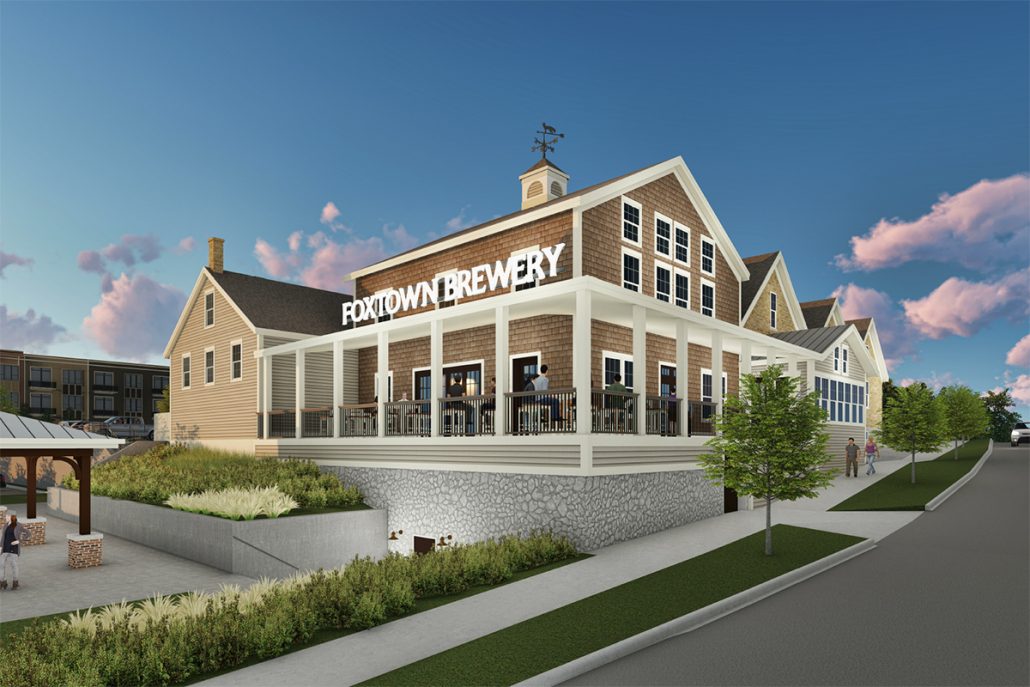 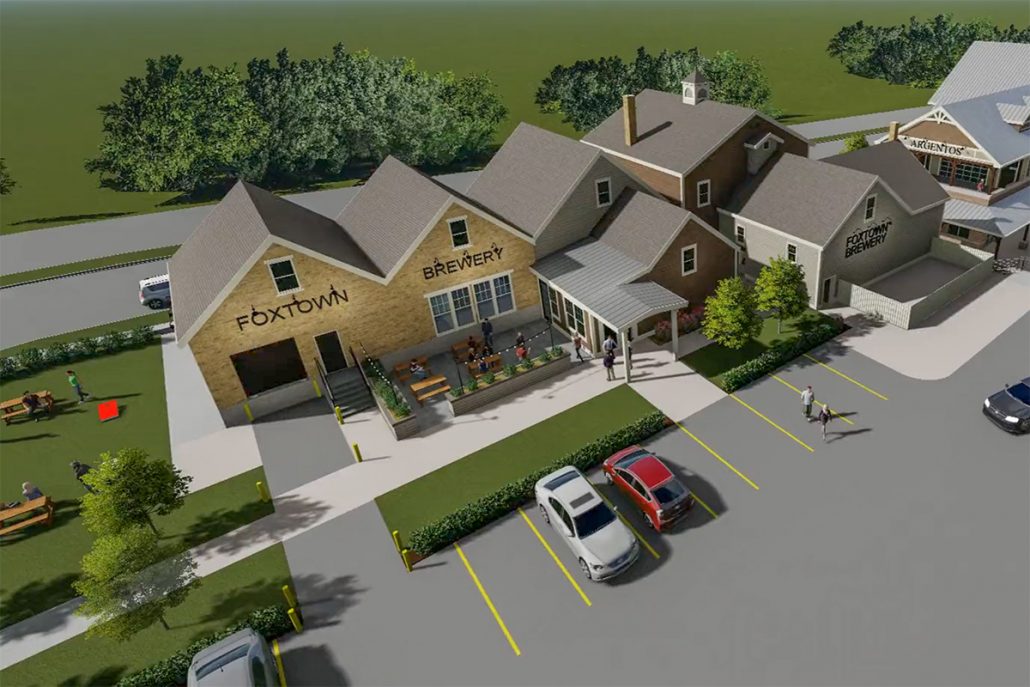 There will be 119 seats inside and slightly more outside, for when the weather cooperates. 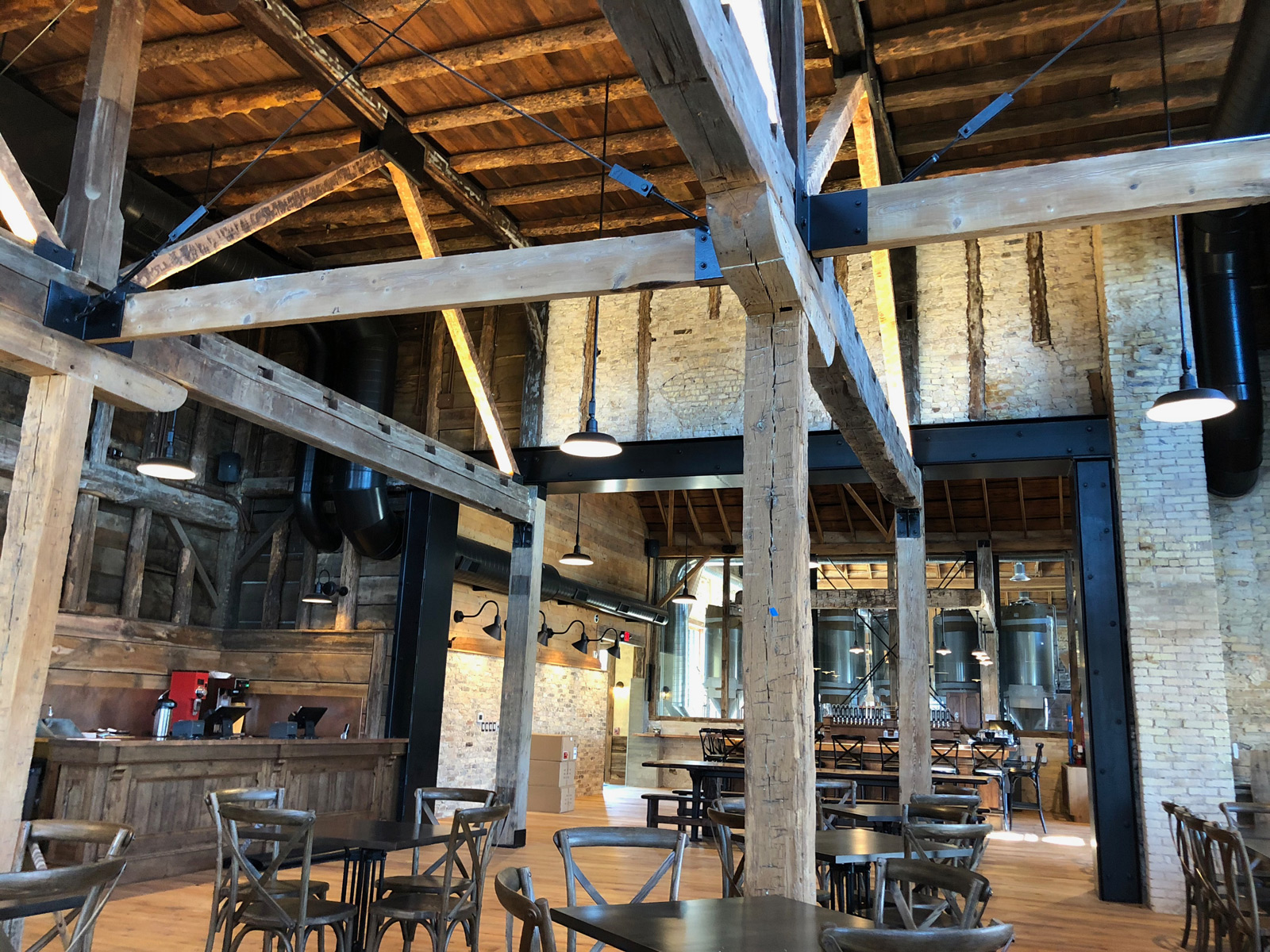 A building next door – with a beer retail spot, a 42-seat breakfast and lunch bistro, a banquet space and more – is expected to come online later.

Once brewing tours begin, the public will be allowed to see the lagering caves, too.