Local nurse embraces past and present with Free Hug Day

As a way to heal after the break-up of an 11-year relationshsip, Monica Lee started Free Hug Day in 2013. On June 20, she will host the event for the third time.

Monica Lee is a hugger.

"Hugging comes naturally to me," she says. "I try to be very empathetic and positive because I know how it feels to have sadness in your heart."

Two years ago, after an 11-year relationship with her high school sweetheart ended, Lee found herself soul searching.

"The break up was very devastating for me and it made me question everything, like who I was, where my life was heading and what I valued," says Lee.

During this time, Lee lost contact with friends and family and says she also lost her sense of self.

"I never really reached out and it made me think about how a lot of people go through tough times alone because they are so afraid to let people in," she says.

As a way to reconnect with others – and herself – Lee organized her first Free Hug Day in 2013. Her third annual Free Hug Day will take place on Saturday, June 20 at 11 a.m. The group will meet at Lulu, 2265 S. Howell Ave., and proceed from there. To view the Facebook invite, go here. 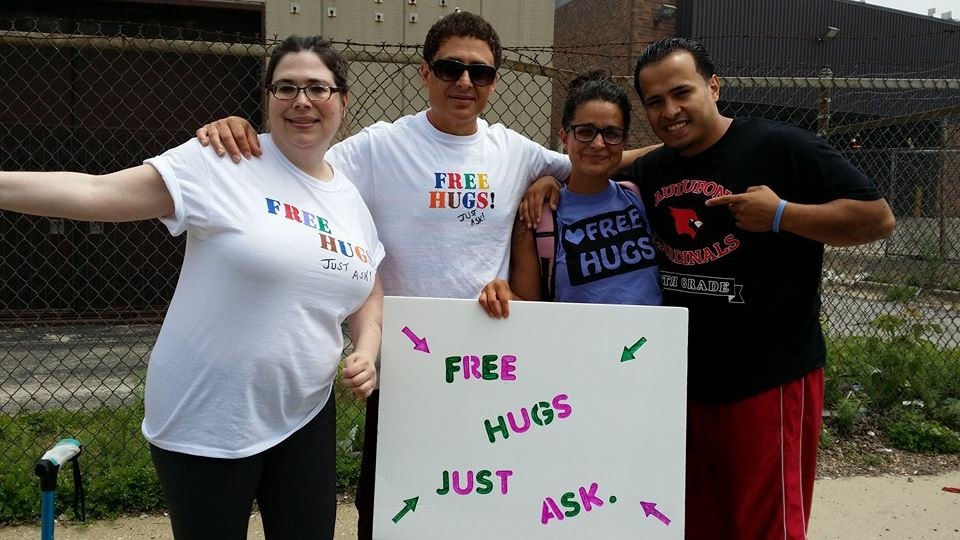 The huggers walk together holding "free hug" signs and / or wearing hug-offering T-shirts. The group ranges in age and physical abilities. Last year, Lee's friend Josie Rupnick – who walks with a cane after suffering from a stroke –  joined the group.

"A lot of passersby approach us for hugs, sometimes we will offer them ourselves," says Lee. "Occasionally a car or two will pull up to us to get one. Last year a guy stopped and asked my group to hug his newborn twins."

In the past, huggers in the group have been a combination of people Lee already knew as well as new friends.

"As I’ve gotten to know myself better I have found and nurtured relationships with individuals who believe in my same core beliefs of unity, love, respect and honoring people. And encouraging them through their life struggles. So I feel I have a good tribe of individuals who will support me," she says.

Lee says hugging strangers was tough for her to overcome at first, but people generally respond in a positive manner which makes it easier. Many people like to take photos with the group.

Once in a while, of course, they receive a negative response.

"Sometimes people are not responsive or rude and say things like ‘I have my own family to hug’ or ‘you probably stink!’ to which I politely say to have a nice day and carry on my way," she says. "There is a reason why I’m out there, but not everyone is going to be receptive to it."

Born and raised in Milwaukee, Lee is a pediatric nurse who worked in the ICU at Children’s Hospital of Wisconsin for seven years. Currently, she serves as the clinical nurse manager for Universal Pediatrics in Brookfield where she works with special needs kids in their homes and trains other nurses to care for them. Lee is also the mother of a 6-year-old boy and an active community volunteer with Habitat for Humanity, the YMCA, Victory Garden Initiative and Newaukee.

Recently, Lee – with the help of friends – created her own organization called Women Encouraging Women (WEW), an urban group dedicated to connecting, encouraging and empowering diverse groups of women through volunteer work and social activities.

In 2013, local artist Ingrid Eubanks set out to give away 1,000 hugs at Locust Street Festival. Wendy Friedrich and her daughter gave away free hugs at Summerfest last year after being inspired by a friend's hug fest in Canada.

"In my personal experience, when I was at my worst, human touch always helped me through it," says Lee. "Hugging is such a simple, kind gesture with such a huge impact. Sometimes people don’t have the words to say, but hugging is a universal way to show you care – when welcomed of course."