Milwaukee has been buzzing about artist Tom Fruin's multicolored "water tower" sculpture that Coakley Brothers announced a couple weeks ago would be installed in the moving, storage and business interiors company's Walker's Point headquarters. This morning it was installed.

All of Milwaukee, it seems, has been buzzing about Brooklyn-based artist Tom Fruin's multicolored "water tower" sculpture that Coakley Brothers announced a couple weeks ago would be installed in the moving, storage and business interiors company's Walker's Point headquarters, 400 S. 5th St.

This morning, the artwork was hoisted onto the roof by a crane and installed atop the steel platform upon which the building's original wooden water tower once sat.

This, after Fruin has been keeping Milwaukee – and the world – updated on the work's progress this past week via his Instagram account, which has about 9,000 followers.

You can read more about the work, about Fruin and about how Coakley Brothers' owner Peggy Coakley discovered and fell in love with the artist's work here.

The translucent and kaleidoscopic water tower was fabricated from steel and plastic by Fruin in his Brooklyn studio and each panel was wrapped in plastic for protection during shipping.

"They're staggered like bricks," he says of the pieces. "They bolt together left to right and up and down. There's a structural cube inside that bolts to the I-beam that's part of the foundational structure. We're about to hoist the whole thing up to the roof. Then it gets field welded right in place." 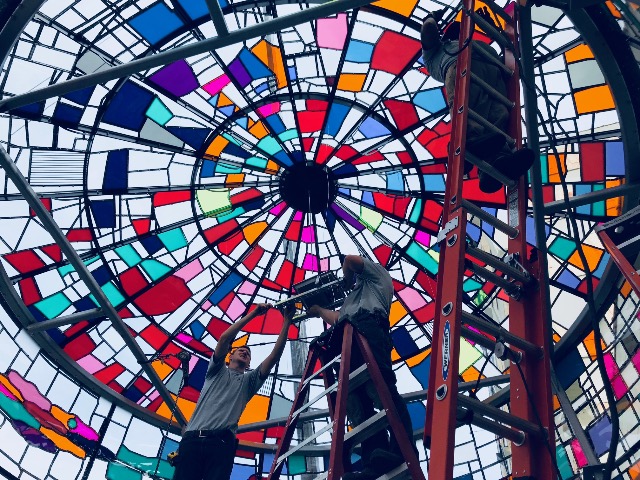 Though he worked to make sure the bolt holes lined up back in his DUMBO studio, Fruin didn't do a test-run assembly in Brooklyn.

"It was really like Christmas Day here (when he arrived Monday) when we unwrapped the panels and saw how they were lining up. There's a very specific order in which they all go together. They lined up perfectly. These guys have big bags of tools and they really know what they're doing."

Fruin has created a pair of similar works that have been installed in Brooklyn Bridge Park and the DUMBO neighborhood in Brooklyn. But those are smaller than this one

"This thing is huge; it's shocking," the artist said. "It's bigger than anything I've ever done. I used to think I worked large-scale. Now I know I do." 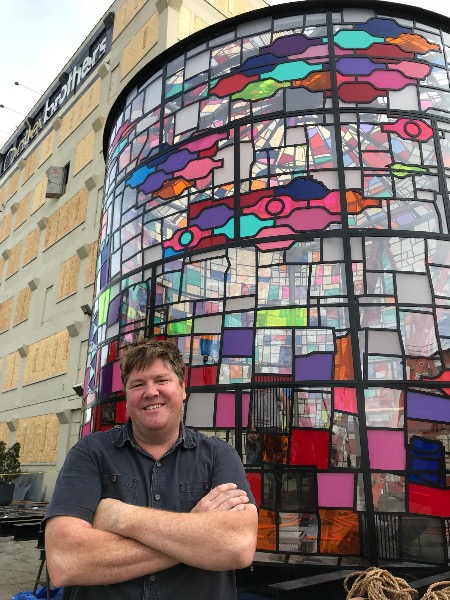 The water tower seems to have captured Milwaukee's imagination in a way that no publicly visible artwork has (unless you consider Santiago Calatrava's Milwaukee Art Museum building public art – I know I do) in recent memory.

Unlike Mark di Suvero's "The Calling" or the Dennis Oppenheim's ill-fated "Blue Shirt" at the airport – and the variety of opinions on the many works in this year's Sculpture MKE – every comment I've seen or heard about Fruin's work has been unwaveringly positive. 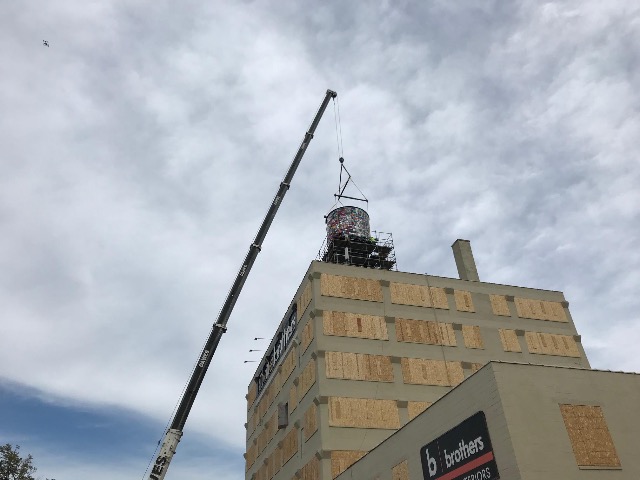 I can't disagree. Once it's lit, I think it's going to be something Milwaukee talks about for years to come. Based on the response so far, it could ultimately become the kind of iconic hometown image all Milwaukeeans embrace.

"We had some tractor trailers hemming us in before so you couldn't see (the water tower) from the street but now every car that passes by slows down, the iPhones come out, taking photos," Fruin says. "Some trucker came by with something unrepeatable shouted out the window in support.

"It's been a slog, three 10-hour days, but there's been great support (from Milwaukee). It's just such an exciting project." 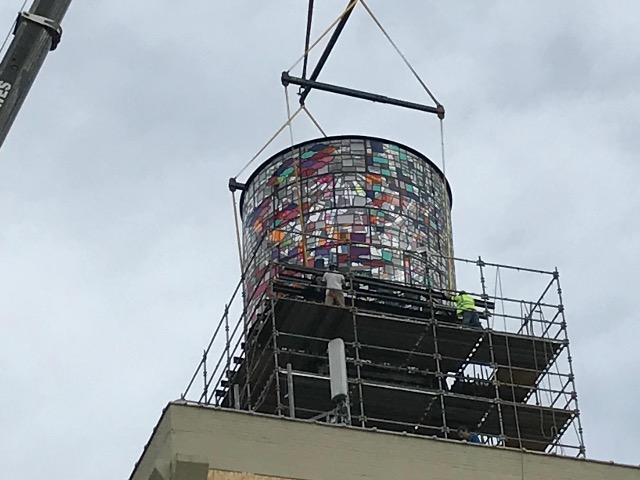 An official lighting ceremony for this new artistic beacon of light on the city's skyline is set for Tuesday, Sept. 26 at 7:30 p.m. Coakley will offer remarks at 7:15.