George Vomberg is the 84-year-old owner of George's Pub, 224 E. Washington St., in the Harbor View neighborhood. Listening to Vomberg is like being presented with a living history book.

By Royal Brevvaxling Special to OnMilwaukee.com Published Oct 13, 2017 at 3:32 PM

George Vomberg is the 84-year-old owner of George's Pub, 224 E. Washington St., in the Harbor View neighborhood. Vomberg was on the verge of selling the business, but lately it's been revitalized as a regular stop for the Pedal Tavern.

Listening to Vomberg is like being presented with a living history book.

Vomberg grew up in Milwaukee and graduated from Pius High School (now Pius XI). He later served in the military police in Korea.

"I worked the pipeline with a Thompson (submachine gun), which I kept in my Jeep," he says.

Vomberg says he dismantled his Thompson and packed it, wrapping its many pieces in his clothes, when he was about to ship home. "But they found it in my gear at the base and confiscated it," he says.

Vomberg gestures to a photo his kids had blown up of him in his uniform that now hangs on a wall in the bar. "That picture was taken just after they found the Thompson. I was pissed."

When Vomberg returned from Korea, he worked at Metropolitan Cadillac, then on Jefferson Street Downtown. One day, he went on a service call with the dealer's wrecker driver, who brought him to a bar at the current location of George's Pub. 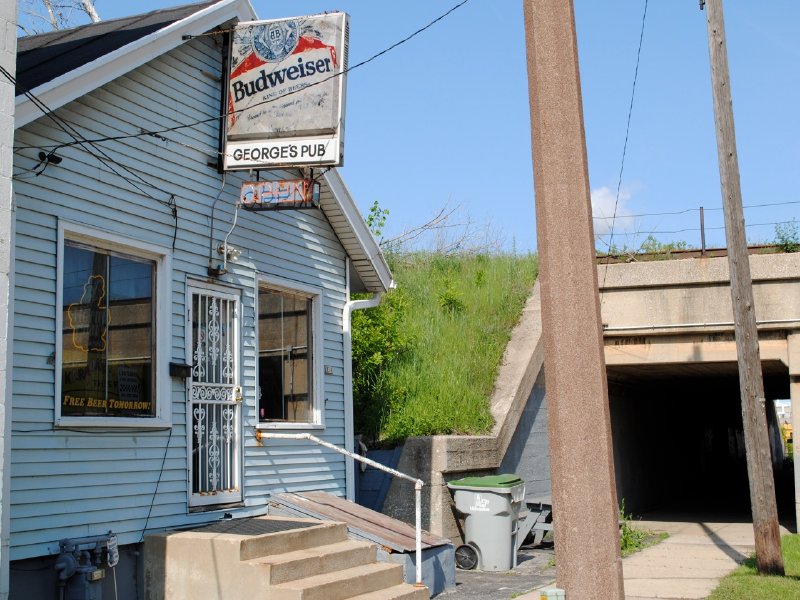 "That's just what you did back then," Vomberg says, referring to the practice of stopping in at your favorite watering hole for a quick beer. A lot of workers stopped at this little bar nestled against the railroad line where it crosses Washington Street.

"There was a lot of industry in the neighborhood at the time, Transpak Corporation was next door," he says. "Drinking here that day, I never thought I'd end up owning the place years later."

Vomberg says he has owned George's Pub for "about 33 years." In the 1960s, he owned Country Corner, a bar in the middle of a block on Kinnickinnic Avenue, and he also owned a biker bar on South 2nd Street called Secrets.

Thinking back to those days, Vomberg says, "Never have a pool table in a bar. You're just furnishing people with clubs."

One wall of George's Pub is lined with a case of mementos. A lot of these items are photographs from Vomberg's and the bar's past, and others came from workers as they cleaned up the city, as well as from when Vomberg worked for a demolition company tearing down buildings for the interstate construction.

George's Pub was an active participant in many historic Milwaukee happenings, including the U.S. Snow Sculpture Competitions which invited snow sculptors from around the world. Gene Kempfer, who Vomberg says was a Milwaukee County court reporter in his spare time, organized these events during the 1980s and '90s.

George's Pub held parties, making food for all the team members, who were in Milwaukee for a week every year for the competition. A team from Wales made the bar its official home away from home. Vomberg is proud of a Welsh flag he has, adorned with the signatures of the visiting ice sculptors. The Italian team one year made a snow sculpture of Vomberg to honor his contributions.

Old Style also sponsored the event and made different mugs commemorating each year. Vomberg organized the food and the music, getting regional acts like Red Deacon and the Cadillac Kids to donate an hour of music. His band, the Nashville Rejects, would close.

Vomberg is proud of these contributions. "I did 12 or 14 years of the benefit. All the money stayed in Wisconsin for cystic fibrosis research."

Vomberg's family has always been in show business. He was in numerous bands, his son is a musician and his parents owned Badger State Shows, a carnival that operated for many years through the mid-20th century. The National Foundation for Carnival Heritage in Kinsley, Kansas, has an archived photo of the Vomberg family carnival.

George's Pub is a bit of a museum for Vomberg's popular country band, the Nashville Rejects, which have been playing bars, weddings and the state fair for, as Vomberg says, "about 100 years." Actually, they played the Pine Hut at the Wisconsin State Fair for 20 years. Vomberg still occasionally plays, but less frequently than in the past.

The Nashville Rejects have opened for country luminaries such as Garth Brooks, Charlie Daniels and the Bellamy Brothers. Typically a four-piece, with three long-term members, the Rejects "go through drummers like most guys go through women," according to Vomberg.

Although the Rejects recorded a few of their own songs, they specialized in country covers, especially Johnny Cash covers. Vomberg's voice can be a dead ringer for Cash's. And like Cash, Vomberg and the Rejects have lived the hard-drinking musician's life. 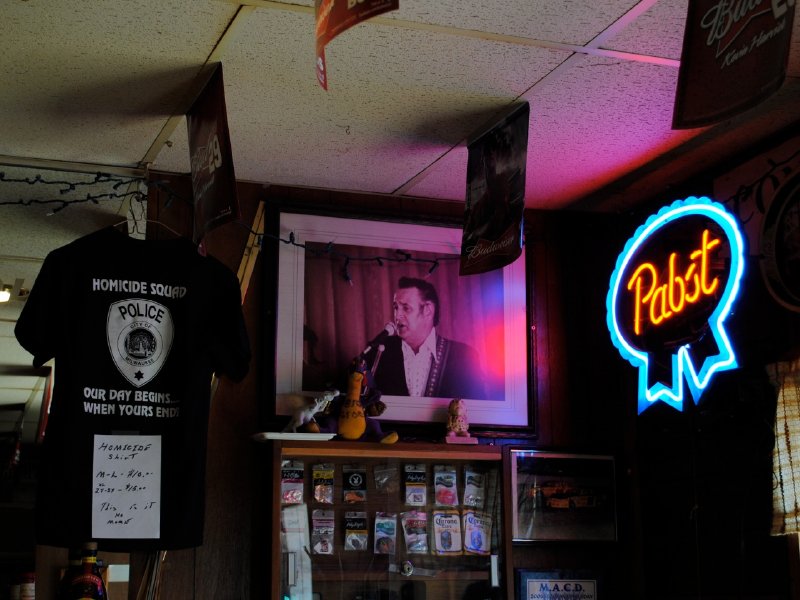 "We used to require a quart of peppermint schnapps on the stage or we wouldn't show up," Vomberg says.

George's Pub is a piece of Milwaukee history, but Vomberg figures that it's soon "time for new blood to come in here."

Vomberg will joke that anyone who buys the bar would get him and his dog thrown in. But, "if someone came in, gave me two percent, made a corporation, they'd have themselves a really good deal. It's all set up (for someone to take over)," Vomberg says.

George's Pub is open randomly, but often from noon to "close." And by close Vomberg and his bartender of 25 years, Steve Jaszkowski, mean if no one's there, they'll close up for the night, sometimes as early as 6 p.m.

Oh and if you go, have a "Yak Juice," one of Vomberg's specialty shots. It's butterscotchy and delicious.