Nod your head yes to this awesome limited-edition Giannis bobblehead

Game 4 left a lot of Bucks fans shaking their heads - so let's talk about something doing so in a positive way.

By Matt Mueller Culture Editor Published May 22, 2019 at 6:46 AM Photography: Bobby Tanzilo

Game 4 left a lot of Bucks fans shaking their heads – so let's talk about something doing so in a positive way.

Produced by FOCO for the National Bobblehead Hall of Fame and Museum, the collectible features the soon-to-be MVP rocking a green road Bucks jersey, draped with an eye-catching and searingly blue Greek flag as a nod to the country of his birth. And best of all, the bobblehead actually looks like Giannis unlike some collectibles that look like a melted Madame Tussauds statue of who they're supposed to look like. 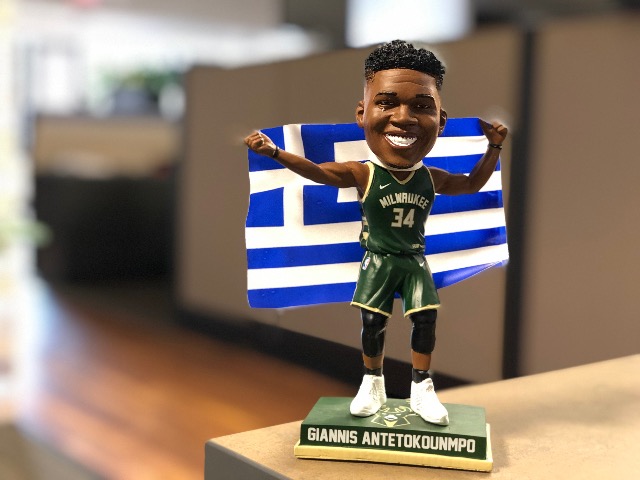 The bobblehead is currently available to purchase in person at the National Bobblehead Hall of Fame and Museum, found in Walker's Point at 170 S. 1st St., or  online at the HoF's official site as well as at BobblesGalore.com.

The collectible costs $50, with an $8 shipping charge. If you want one to add to your man cave or Bucks shrine, however, you'll have to act fast, as there's only 360 individually numbered bobbleheads in stock. And we imagine that, like the Pistons, the Celtics and eventually the Raptors, they'll be gone soon.

Now the only question left: What's Giannis think of the bobblehead? We imagine something like this ...