Patricia Van Alyea owns the yellow giraffe that's visible from Lincoln Memorial Drive. Recently, she shared its story with OnMilwaukee and, it turns out, the giraffe once shared the yard with live goats.

A version of this story originally ran in 2016.

Last weekend, after years of driving by the giraffe on Lincoln Memorial Drive, I also noticed a sign hung from the chain-link fence enclosing the yard. The sign reads, "Free the Giraffe."

Intrigued, I stopped by the house on East Back Bay Street, rang the door bell and eventually left a note, asking if the owner would call me to share the story of the bright, yellow structure. Three days later, Patricia Van Alyea, who co-owns the house – and the giraffe – gave me a call.

Patricia and her late husband, Thomas Van Alyea, bought the giraffe in 1969 or 1970 on a whim. They were driving on I-94 west of the city and saw it outside a business selling playground equipment. The couple had two small children at the time, who are now 49 and 52, and spontaneously pulled off the road to buy the long-necked climber.

"We fell in love with the giraffe immediately," says Patricia. "It’s funny, because it’s not like we had a thing for giraffes before, we just loved this one as soon as we saw it."

Patricia and her husband were married in 1962 and moved to the house which was, at the time, owned by Thomas’ grandmother. Thomas passed away a few years ago and Patricia remains the sole owner, along with other properties in the neighborhood.

Thomas was the son of architect Thomas Van Alyea, Sr., who designed hundreds of homes on the North Shore and Milwaukee's East Side. His mother, Margaret Fitch Van Alyea, wrote a column for the now-defunct Milwaukee Sentinel.

The Van Alyeas moved the giraffe into their massive yard where their children played on it for a decade. At the time, the yard was filled with trees – one had a tree house perched in it – a sandbox and a few pets goats who lived in a structure.

Thomas, an avid recycler and environmentalist, also had a large compost pile in the yard – long before most people understood the benefits. Consequently, it was often mistaken for a pile of "garbage" by neighbors and passersby.

According to Patricia, it was also misunderstood by "famous" year-round sunbather and Milwaukee icon, the late Dick Bacon, who once complained during a press interview that the Van Alyeas’ goats were mistreated and fed garbage and cigarette butts. Although this was not true, the Van Alyeas decided it was time to re-home the goats.

"After (Dick Bacon) got on his soapbox, we donated the goats to a home for delinquent boys," says Patricia. "Not long after, one of the boys from the home stopped by one day, rang the bell, and told me one of the goats had choked on an apple and died."

When the children got older and moved away, the Van Alyeas stopped manicuring the yard. Today, Patricia says there are still orchids in the yard planted by Thomas' grandmother.

But, for the most part, it’s the "giraffe’s jungle now," says Patricia.

It was during the recent Milwaukee Lion "scare" that someone hung the "free the giraffe" sign. Patricia has no idea who painted or hung it.

"I find it adorable," she says. "I thought about taking it inside and hanging it in my house, but it’s so much fun where it is, I have to leave it."

At one point, Patricia tried to donate the giraffe to Back Bay Park, which is across the street from her front door, but the gift was not accepted because it did not meet code as a safe-play structure for children.

Currently, the giraffe is inaccessible because the stairs leading to the yard are in disrepair. However, Patricia has grandchildren to whom she would like to introduce the giraffe someday, so there’s a chance the colorful creature will have company again. And, hopefully, look less lonely from the street. 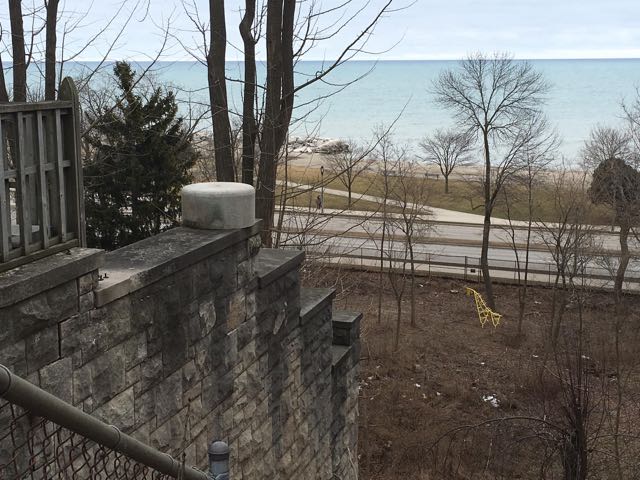