Pay a visit to Blue Bat Kitchen, 249 N. Water St., and you’ll find plenty of tequila. But you’ll also find a menu of creatively conceived globally inspired menu items that are begging to be tasted.

We were curious about the inspiration behind the restaurant’s signature bowls, tacos and salads. So we talked with Chef Alex Sazama of Hospitality Democracy about the work that went into creating the Blue Bat Kitchen menu.

"We knew what we wanted when we began," says Sazama, who created the menu with the help of Chef de Cuisine Patrick Murphy. "It needed to be fun, shareable and really match the energy that’s wrapped into the concept. This was by far the most fun menu that I’ve worked on. We didn’t pay attention to any rules; it was just about creating really delicious globally inspired dishes."

And it all began with research.

"It really all started with me sitting on my couch," notes Sazama. "I spent a lot of time doing research on what the popular dishes were in certain regions of the world, and then thought about ways to put a really fun spin on them."

The creole bowl is a good example. 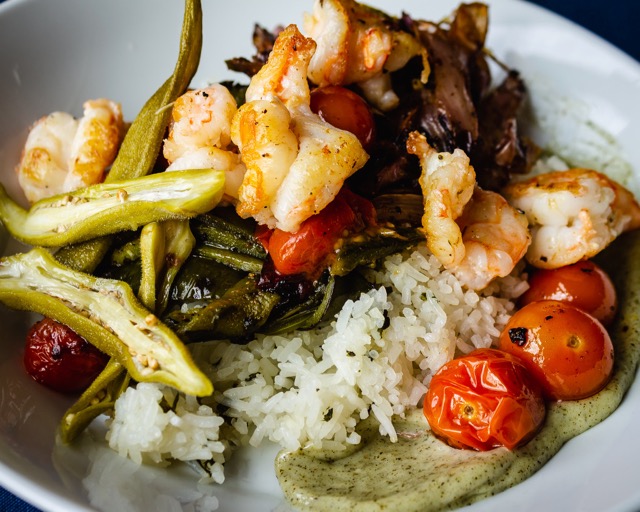 "It’s really our take on gumbo," he says. "It started off as a taco, but as we worked with the recipe, it really came out better as a bowl."

Most items will seem at least somewhat familiar. But, when you look closer, you’ll spy the thought that went into them. 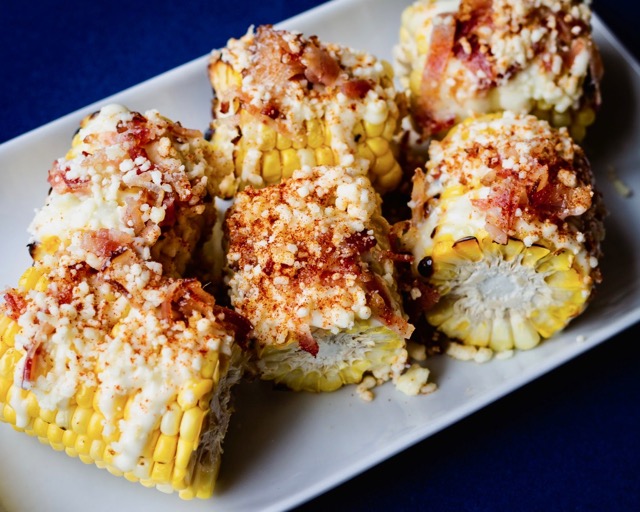 "The street corn is one of the dishes where I feel like we just nailed it," Sazama says. "It’s a traditional street food, but we really made it with a uniquely Wisconsin approach. We top it with Pabst aioli and Nueske’s bacon with the more traditional cotija cheese and a bit of paprika."

Among the most popular items on the menu, to date, are the mezcal agave steak tacos served with red chimichurri, rajas, queso fresco and cilantro. Interestingly, it’s also one of the items that’s infused with the restaurant’s beverage of choice: mezcal. 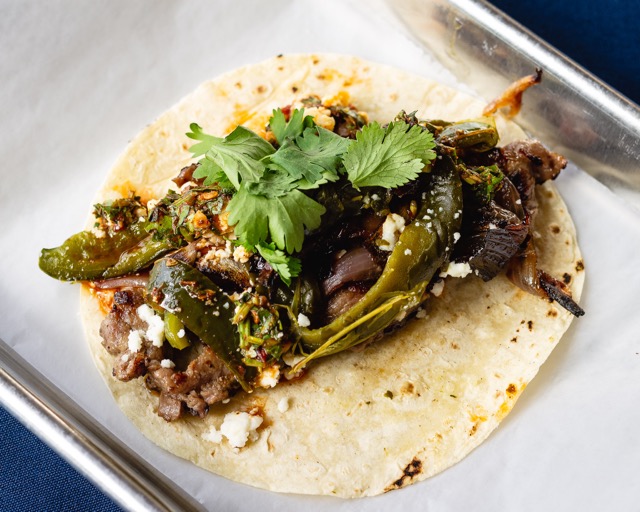 "Because there’s such an emphasis on the beverage, it was also really important to us to find as many uses for tequila and mezcal as we could," he says. "So we really looked at ways to use it as a marinade, as is the case with the steak tacos. In other cases, we incorporate it into a vinaigrette. In the watermelon salad, the mezcal really provides a nice counterpoint to the sweetness of the fruit and the corn."

Sazama says that that part of what makes the menu what it is was the diversity of input from a variety of people.

"It was also fun because there’s a little bit of everybody on the menu. Joe and Angie [Sorge] put forward the fried green tomato tacos. And the sweet corn hushpuppies and blistered shishito peppers are Patrick’s [Murphy]. And they’re all really good." 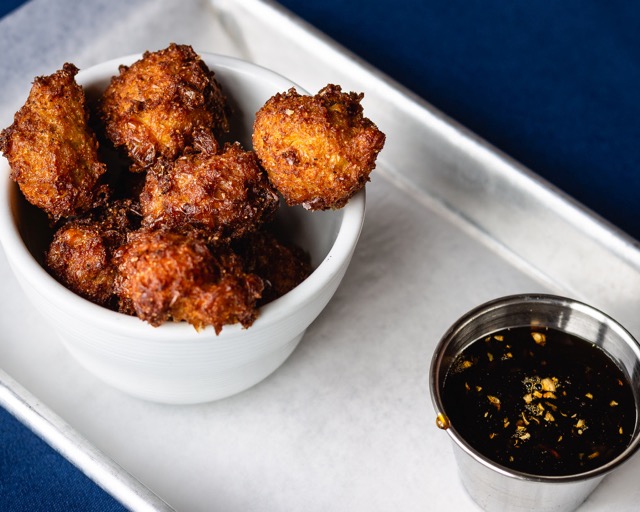 Among the things that make the Blue Bat Kitchen menu unique is the fact that a fairly wide variety of items are customizable.

"There’s quite a bit of flexibility in terms of how people can eat," says Sazama. "Every taco can be made into a bowl. People can also double the amount of protein in their tacos – essentially creating these amazing overloaded tacos."

The menu was also created to be accommodating to vegetarian and gluten-free diners.

"Those items also allow flexibility for people who eat meat," he says. "Chicken or shrimp can be added to a number of items that are vegetarian on their own."

There are also Blue Bat’s signature hot sauces, each of which is created to add dimension to a guest’s meal. And they were created to accommodate a variety of palates. 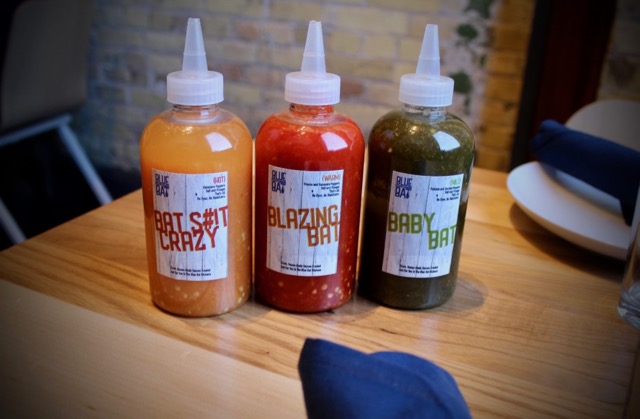 Baby Bat is made with both mild poblano peppers and bright serranos, providing just a bit of punch. Meanwhile, Blazing Bat offers up mid-range heat with its combination of fruity and spicy fresno and habanero peppers. Meanwhile, Bat Sh#t Crazy was created for those who like it spicy, offering the lingering heat of pure habanero peppers.

Sazama says they also created the menu in a way that would prevent regular guests from getting bored.

"Seasonality is important because the menu is pretty small," he says. "So when we have ramps, we’ll use them. When peaches are in season, you bet we’ll use them. And the goal will be to really surprise people with some new things."

There’s a similar philosophy applied to desserts, which change daily and include items like churros, crema cheesecake with apricot agave glaze or custom Purple Door ice cream flavors like orange mezcal, smoked chocolate and horchata, each of which can be ordered by the dish or as a flight.

Sazama says they also have a number of tricks up their sleeves when it comes to dessert ideas. "It’s going to be really fun," he says.

Speaking of fun, Blue Bat Kitchen also offers something a bit unique in their lower level bar: an all day happy hour. What's that?

Well, it means you can get a great view of the river along with buckets of beer (five to a bucket, priced $15-25) or pitchers of beer or margaritas to share. And because you should never drink without a bit of food on hand, there's also an abbreviated bar menu with a few tacos and snackable items like tuna poke nachos, blistered shishito peppers and sweet corn hush puppies.