For those riding North along Lake Michigan, Whitefish Bay is a perfect spot to stop, take a breather and grab lunch or dinner from spots like MOXIE Food + Drink. And if you visit on Thursday, Aug. 30, you also have the opportunity to meet Gloria Struck.

Motorcyclists and motorcycle enthusiasts from across the globe have already begun to descend on the streets of Milwaukee in celebration of Harley-Davidson’s 115th Anniversary, which takes place Aug. 29 through Sept. 2.

There’s no lack of places to visit and things to see across the city during the five days of festivities. Among them is MOXIE Food + Drink, 501 E. Silver Spring Dr. in Whitefish Bay.

MOXIE owners Anne Marie Arroyo and Tamela Greene are no strangers to the world of motorcycling. Both were long-time employees of Harley-Davidson before branching out to open their first restaurant in 2016. And their respect for the pastime is evident in the restaurant’s decor, which includes an homage to one of the nation’s most iconic female riders, Gloria Struck.

Arroyo, who met Struck at the Sturgis Motorcycle Rally in 2014, describes her as "both an inspiration and a dynamo." And, in honor of both her legendary story and her "moxie," the two owners included a painted portrait of Struck in the restaurant, deeming the table beneath "The Gloria Table." 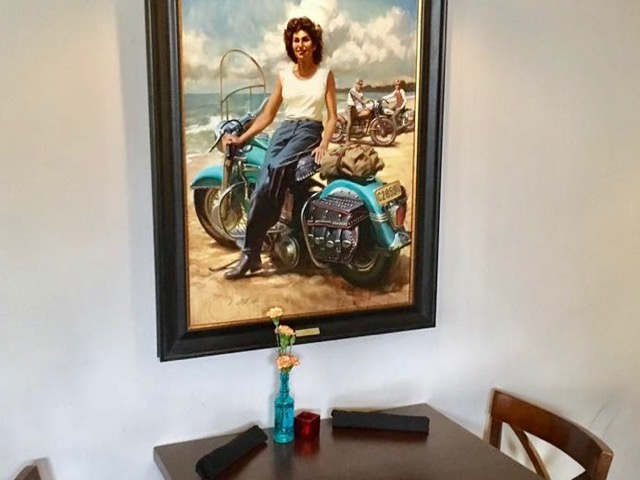 Struck will visit the Whitefish Bay restaurant in person for the very first time on Thursday, Aug. 30 from 2 to 3 p.m. During her visit, she’ll promote and sign copies of her new book, "Gloria - A Lifetime Motorcyclist: 75 Years on Two Wheels and Still Riding"

Struck, now 93, began cycling at the age of 16. She was a true trailblazer. After all, when she took her first ride it was 1941, and women simply didn’t ride motorcycles. Nonetheless, this courageous act sparked a true passion, and throughout her lifetime Struck logged well over 500,000 miles in her travels across the continental U.S. and Europe. In fact, at the age of 74, she tackled a bucket list challenge as she and her son Glenn motorcycled throughout Europe, successfully conquering passes including the Passo Stelvio, the most challenging ride in the Alps.

Over the years, Struck’s story has gleaned both national and international attention, garnering her appearances on television, live radio and in countless magazines and newspaper articles. Struck has been inducted into both the Sturgis Hall of Fame and the AMA Motorcycle Hall of Fame and she remains one of the longest standing members of the Motor Maids, an organization she joined at the age of 21.

Of course, Struck isn’t the only rider Arroyo and Greene hope to host during the Harley-Davidson’s 115th Anniversary celebration. In fact, the pair are rolling out the proverbial red carpet for Harley riders visiting Milwaukee from around the world.

"During our years on the road working for Harley, we met and worked with passionate motorcycle enthusiasts on a daily basis," says Arroyo. "We are thrilled at the prospect of seeing old friends again and hosting them in our restaurant. A lot has changed since we saw them last!"

Get your tickets for Mac & Cheese Fest at Wisconsin Brewing Co. Park on Sept. 24

Lori Fredrich Aug 16 Dining
Do This

5+ great reasons to get your tickets now for Indulge Milwaukee, Aug. 20-21

Lori Fredrich Aug 15 Dining
Do This