The Goldmann's Department Store sign is back in Milwaukee after spending the last three years in a North Dakota museum. But the process of getting it here wasn't easy.

Metaphorically speaking, Adam Levin’s quest to bring the Goldmann’s Department Store sign back to Milwaukee has been as on-again-off-again as a motel’s blinking "vacancy" sign, but it looks like the eventual return of the iconic sign to Historic Mitchell Street is definitely "on."

It wasn’t an easy process, though.

Last November, Levin reported through his popular Facebook group, Old Milwaukee, that he tracked down the massive sign that was sold in 2015 to the National Save the Neon Signs Museum in Minot, N.D.

Levin contacted the new owner of the sign who agreed to sell it for $2,000. Within a week, Levin crowdsourced the money, primarily from members of the Old Milwaukee group.

Levin hired an Atlanta-based trucking company to pick up the sign and deliver it back to Milwaukee. He then contacted numerous organizations and individuals to find a new home for it, but quickly realized it was more difficult than he anticipated. It wasn’t that people weren’t interested, but because the sign – at 800 pounds and 24 feet long – was so incredibly large, it literally wasn’t a fit. 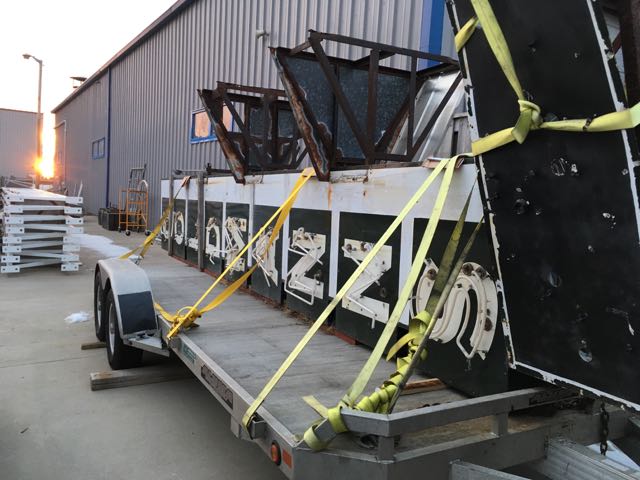 Upon the recommendation of a member of the Old Milwaukee group, Levin contacted Jim Witkowiak, who was part of the Historic Mitchell Street Business Improvement District (BID) and a former alderperson. Witkowiak was very interested and offered storage space in his Waukesha warehouse.

Suddenly, Levin thought all of the proverbial ducks were in a row and the sign would soon return to the city on the shore of Lake Michigan. However, Levin received a call from the trucking company retracting their agreement to move the sign because they decided it wasn’t worth their time.

Levin was unable to find another company to transport the sign so he thought it wasn't going to happen and started to refund contributors’ money.

"PayPal wouldn’t let me just hit a button and refund everyone’s money at once. I had to do it one person at a time," says Levin. "Because more than 90 people contributed, refunding them was a time-intensive process and one that would have taken me about a week to complete. But in the end, I’m glad it happened this way."

When Levin had refunded about $400 of the $2,000, he was contacted by Ron Giguere, also from the Mitchell Street BID, who said he wanted to help him find a way to get the sign back to Milwaukee.

"At that point I was pretty discouraged. I felt like I’d tried everything and didn’t know what else to do, but he encouraged me to contact Jim (Witkowiak) again and at least stop refunding for now," says Levin.

After realizing the sign’s return was in jeopardy, Witkowiak offered to not only store the sign, but to pick it up with his truck and repair it as well.

Last Friday, Witkowiak drove to North Dakota to retrieve the sign. He returned with it to his warehouse on Monday and plans to slowly restore the sign – which is in need of new paint and neon. Eventually, he will mount the sign next to a Mitchell Street building that he owns – just a couple of blocks east of where it originally hung. 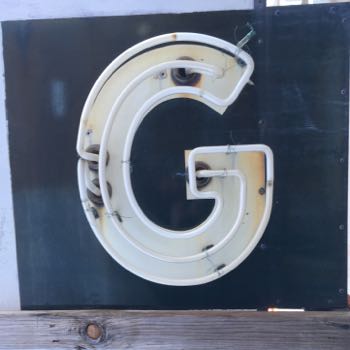 "I couldn’t let myself believe it was really going to happen until I saw the sign in front of me," says Levin. "I’m very persistent about things I am passionate about and I’m passionate about this because it is a part of Milwaukee history and from a place everyone was fond of. No one ever says, ‘Goldmann’s? I hated Goldmann’s.’"

Levin grew up going to Goldmann’s with his grandparents and remembers eating at the lunch counter inside the department store. As an adult, Levin developed an interest in vintage signs and often pulls his car over to photograph and post them to social media.

Levin says he isn’t sure how long it will take to refurbish the sign because Witkowiak is taking it on as a side project and also needs assistance with neon restoration.

But Levin doesn’t care how much time it takes.