One guy said he likes Donald Trump on "Shark Tank." Another was excited because the Republican debate here was the biggest national story about the city since "Jeffrey Dahmer." And they said the circus was inside?

One guy said he likes Donald Trump on "Shark Tank" (wrong show, buddy). Another guy said he was excited because the Republican debate coming to Milwaukee was the biggest national story about the city since "Jeffrey Dahmer."

And they said the circus was inside?

Trump, Trump, Trump. That’s all anyone was talking about, though, as people – no-name Republican activists, top legislative leaders and former legislators, a smattering of protesters, a few gawkers, and gaggles of media – gathered at Milwaukee Theatre for the GOP presidential debate.

Inside the massive media center on the court in the UWM Panther Arena, where rows of reporters, national and state, clustered in front of massive TV screens, waiting for the underdog debate to start, the media were instructed by the RNC to use the WiFi password "StopHillary."

The media don’t get access to "debate hall," and are instead tucked away inside the Panther arena, although some were granted passes to the "spin room" (including this reporter for OnMilwaukee) where operatives and sometimes candidates show up to, well, spin, starting a half hour before the end of each debate and continuing for a short time after it. At least they’re honest about the fact they’re spinning.

Supposedly Trump shows up in the spin room sometimes. One reporter said that’s where the real media action is.

At least the WiFi password wasn’t "MSMsucks." It might as well have been, though, judging from the protester who carried around a sign reading "don’t believe the liberal media" and the scowls on some of the Republican folks streaming into the debate hall. The conservative distrust for the media is very real, and very strong. It’s part of what’s fueling the rise of the non-establishment types.

Cubicles were set up in the back of the Panther Arena for various reportorial live shots as the locals like Mike Gousha and Charles Benson mingled with national reporters from every outlet under the sun (no big celebs like Anderson Cooper were spotted yet, though. They must get their own room). Some Republican legislators headed into Major Goolsbys before the debate started; inside Goolsbys, the waitress could hardly contain her excitement about all of the somewhat famous types and really famous types descending on the city.

If selling pins is basically an informal poll, there is a continuing swell of Trump support or at least fascination.

"It’s 5-1 Trump," revealed Lori Levi, of her pin sales. Levi had journeyed to Milwaukee from Michigan to sell political buttons on the corner of Kilbourn Avenue and 4th Street. 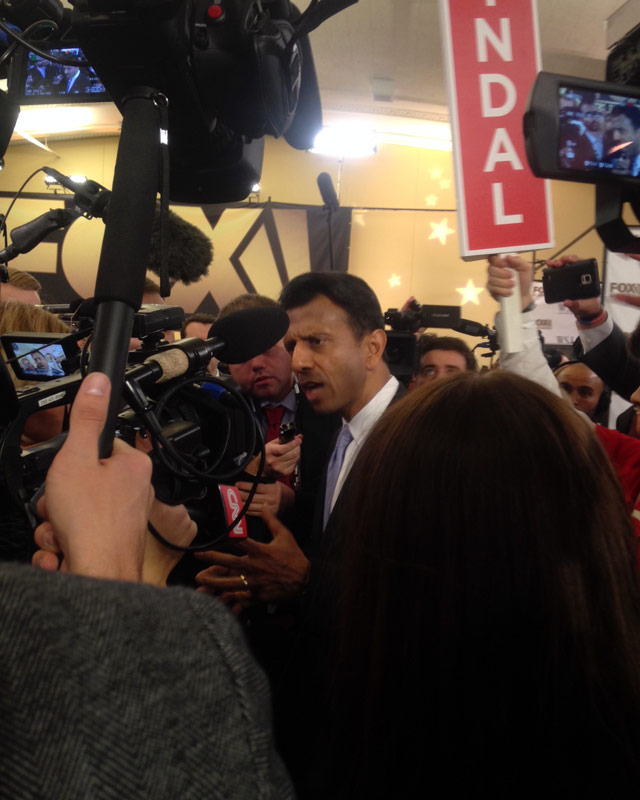 "They are sick and tired of political correctness," she said. (As noted, they’re also sick of the mainstream media. Of course, the protester protesting the "liberal media" was the talk of the media).

Whose pin was going second? "Carson and Cruz, an even match."

The "Stop the Invasion" immigration pin was also being snatched up like hotcakes, she revealed. Levi sells the pins around the country and puts a lot of the money from the sales into her daughter’s college fund.

Sightings of candidates were few and far between before the debate, although a security guy said Chris Christie was spotted swanning around Kilbourn Avenue around noon, and last seen headed east.

Inside, the chatter among the political class was about whether Jeb Bush’s media consultant would make him look like an overly caffeinated guy doing what a media consultant told him to do (and if he’d bring up baby Hitler again); about Al Gore now saying he would not endorse Hillary; about whether Ben Carson stabbing someone would come up (earlier in the day, Trump retweeted "Look when you try to kill your mom, that's it for me, no walking on water"); about whether these debate moderators would act sane; and about whether Trump would land his helicopter on the roof of the Hyatt.

The last part was a joke from a reporter ensconced in the media center, the screen inside which announced "Fox business Republican Presidential Debate Truck Feed."

"Maybe he will rappel down," the reporter said.

A few of the protests outside turned serious, although there were far more reporters than politicians or protesters. One protester held a sign that read "Wisconsin civil authorities do not fear the feds. Fear God. Defend the preborn."

The father of Corey Stingley (a local teen who died after being restrained) at one point joined a protester who wouldn’t give his name to the media. The protester with him was seen at one point stepping on an American flag as he dragged it on the ground next to him.

"No justice, no spending. Boycott Christmas" said the protester, who was the loudest at the scene. "A country built on prejudice and hate will never be great!" shouted the man for hours through a megaphone as cops stood nearby organizing security. "How to get away with murder in Milwaukee, when the DA is covering things up," he declared.

A guy named Josh who was soliciting dollars for skateboard tricks across the street announced that it was "private" whom he was voting for. He said he came down to "see what all the hype is about." He was hoping Donald Trump would come down the sidewalk so he could ask him for money. He theorized that Trump might just give him a few bucks because it would be a good media moment if he did.

"Do you like any of the people in there?" he was asked, with a gesture toward the Milwaukee Theatre down the sidewalk, where the debate was about to take place.

"No," he revealed, taking a puff on a cigarette as he clutched his skateboard under one arm, then clarified, "I like Donald Trump. I like his TV shows. You’re Fired. Shark Tank." But he doesn’t think he will vote for him.

Um, isn’t that Mark Cuban? (And The Apprentice…)

Tony Gragg, of Milwaukee, had time to come hang around the scene because he is unemployed.

"I was just curious. I’m a proud Milwaukeean. There’s racism, but it’s home." (The pride theme was echoed by people streaming into the debate hall too; one elegantly dressed woman from Milwaukee said she was proud and thought the debate was great for the city, but then her husband squired her quickly away before she could give her name to a reporter).

Gragg said he’s happy the debate came to Milwaukee. He’s the guy who said it was the biggest thing since Dahmer. "Summerfest is big but that’s not so regional," he said. "I think it brings more press attention to the city."

Gragg said he’s a Democrat. "I’m not a Republican," he announced. But then he confided "I’m starting to like Mr. Trump."

He said he doesn’t like Trump’s stance on immigration, though, but he is starting to like other things about Trump.

"He’s honest and straightforward," he said.

Gragg thinks the debate attention on Milwaukee is good because he wants a job. He thinks maybe the attention will bring some jobs to Milwaukee.

"I’m looking for work," he said. "A lot of good people are overlooked in the city. It’s so segregated, and a lot of the talented people aren’t getting jobs."

Maybe it’s not so funny after all. The candidates were about to take the stage for the underdog debate. It was about to get serious.