Grant Park's Seven Bridges Trail - there are more than seven! - is one of the best to be had in the County Parks. We take a walk on the trail but also through its history.

Typically, the roughly two miles of ravine trails in South Milwaukee’s lakeside Grant Park are an oasis of calm in the city, offering a peaceful respite amid the chirping of birds, the sound of Lake Michigan lapping at the beach and the rustle of the trees in the breeze.

While they were less so on a recent visit during the pandemic shutdown, when Milwaukeeans were out in force enjoying (as they should) the area’s green necklace of parks, the Grant Park trails – called the Seven Bridges Trail, despite the fact that there are more than seven – are among the best to be had in the County Parks.

Heavily wooded, the trail – the main loop of which is just a half-mile – has a stream running down the ravine to the lake, lovely stone walls and benches, as well as the numerous wooden bridges – including the elaborate entrance bridge at the trail head. 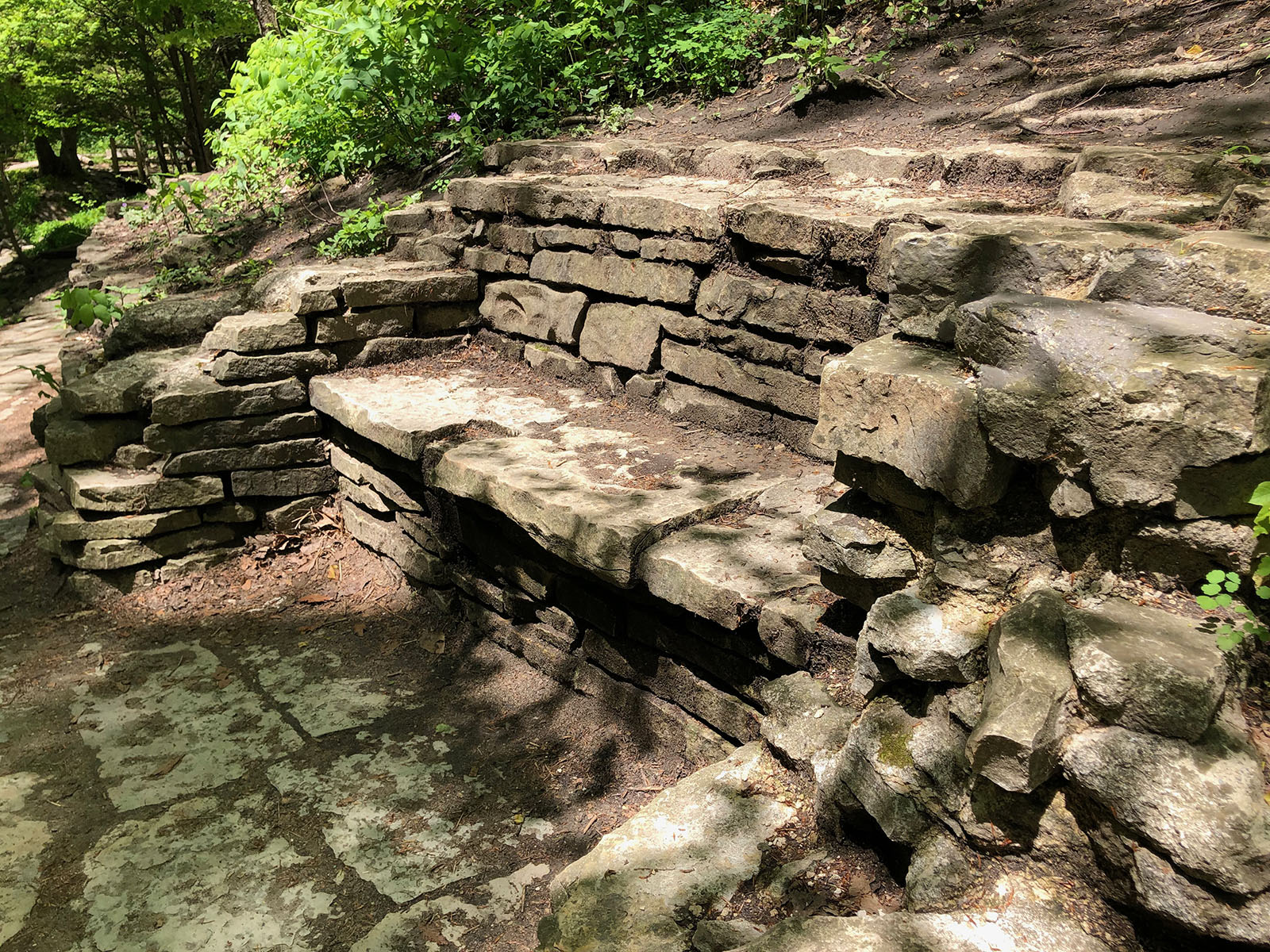 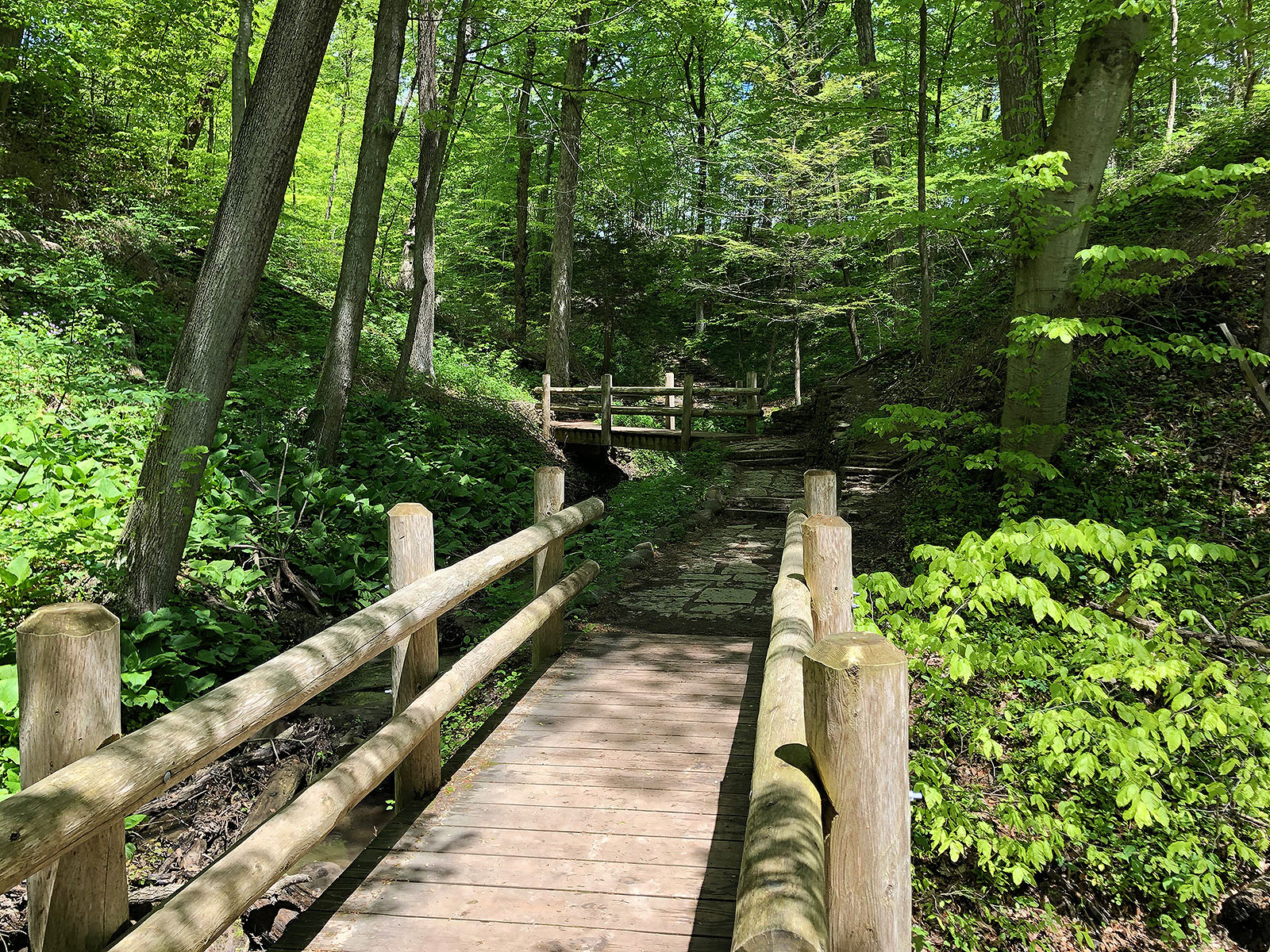 The trail, which can be accessed from a small roadside parking area on Grant Park Drive which runs through the park, which, at 380 acres, is the second-largest in the system (after the much larger Whitnall).

Though it was the work of hundreds of people, and surely hundreds more have contributed to its restoration and upkeep over the years, the initial credit for Seven Bridges Trail leads right to the door of Frederick C. Wulff. 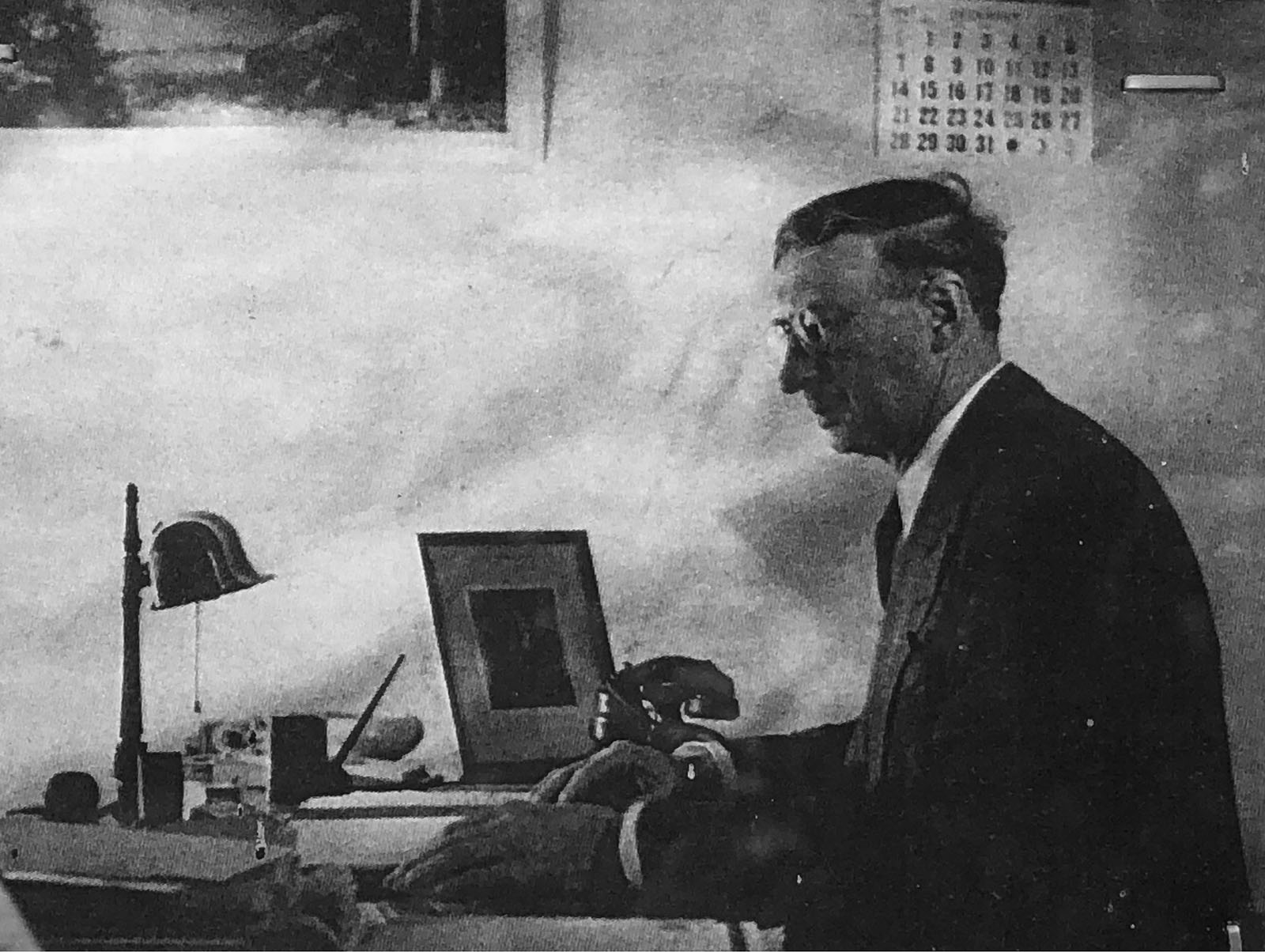 And that door can literally be found just off the trail, as Wulff’s home survives as a rentable overnight facility.

Born in Schleswig, in northeast Germany, in 1887 to a Danish father and a German mother, Wulff studied botany and forestry. He came to America in 1910, a year before Grant Park was established. 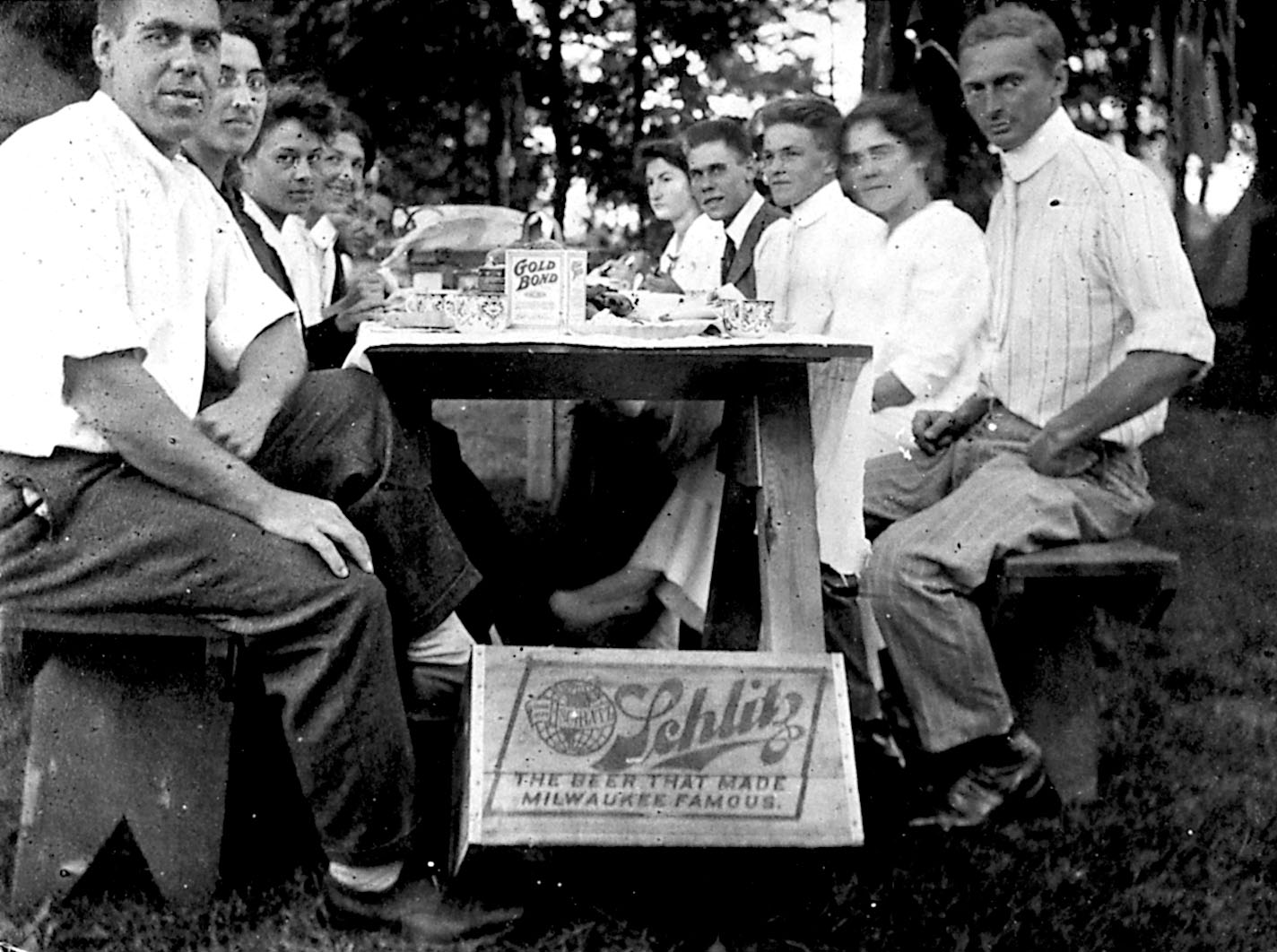 Wulff, far right, above, next to his wife Dorothy, at a 1923 family picnic. Below, a 1921 image of the Wulff Lodge. Reprinted from "South Milwaukee," by Nels J. Monson and Dean Marlowe Jr.
(Arcadia Publishing, 2004). 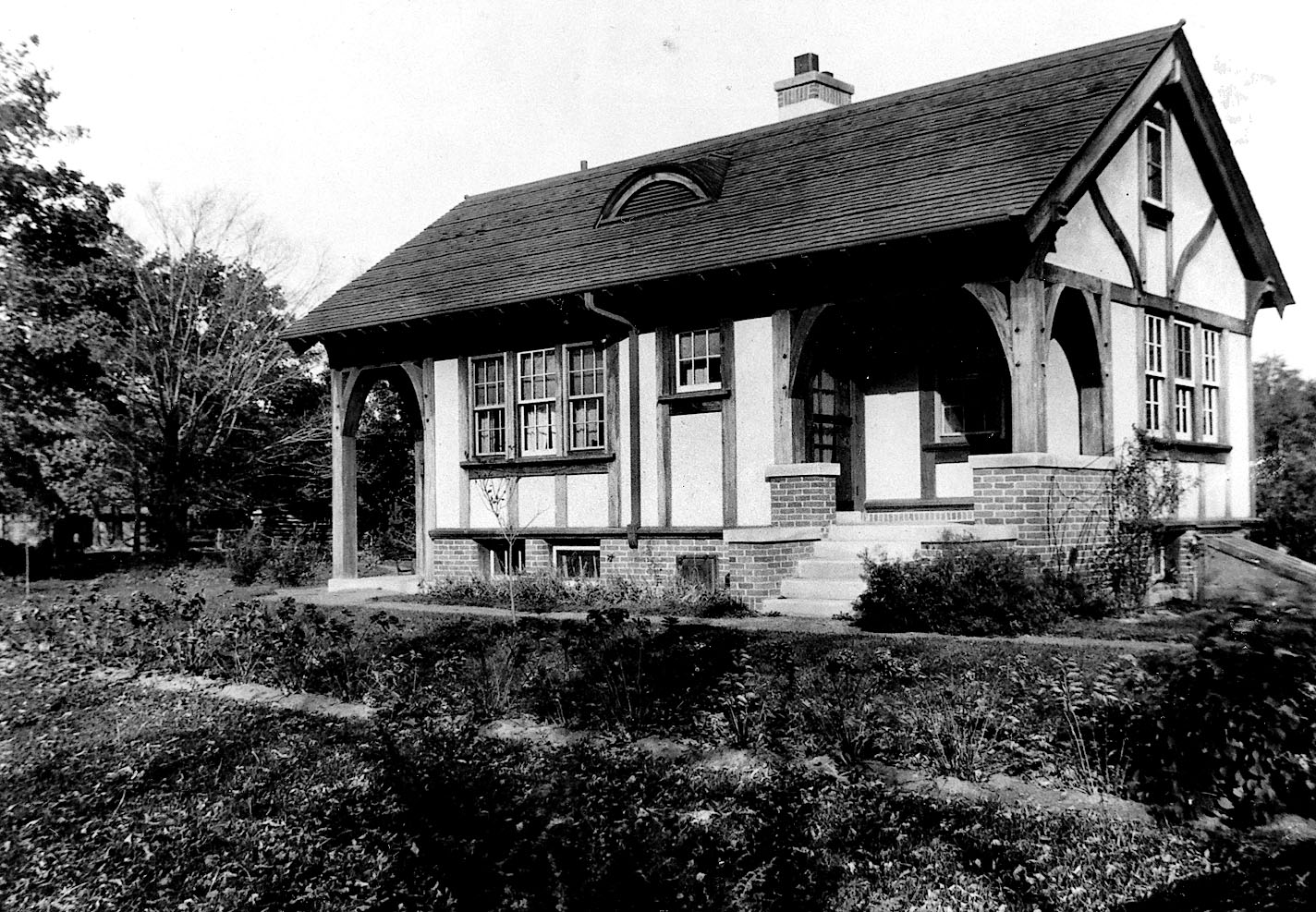 In 1914, the Milwaukee County Park System tapped Wulff to become its first-ever Superintendent of Horticulture, which meant he was expected to set up – in Grant Park’s Wil-O-Way area – an orchard with apple and pear trees, a nursery with a greenhouse and a game farm where he would raise ducks, geese, peacocks and other fauna for the parks.

In 1917, the commissioners built Wulff and his wife Dorothy the Tudor Revival house that is now the Wulff Lodge, just north of the trail. By 1930, five Wulff children had been born and were living there, too.

Two years later, Wulff became a U.S. citizen, a process witnessed by Charles Whitnall. Despite this Wulff's background made him some local enemies, according to historian and author Nels Monson.

"There are stories (that) because of his German heritage he was publicly harassed during World War I," says Monson, who co-wrote a book about South Milwaukee, called "Images of America: South Milwaukee."

"One incident had him being chased from downtown South Milwaukee back to his refuge in the park. There was a group who actually petitioned the Milwaukee County Board of Commissioners to have him fired due to his suspected – though never documented – 'German sympathies'."

Despite this in the following decade, Wulff began work on the trails and bridges that were the foundation of Seven Bridges Trail.

Work would continue throughout the 1920s and ‘30s, expanding the trails and building the stone walls, benches and bridges. 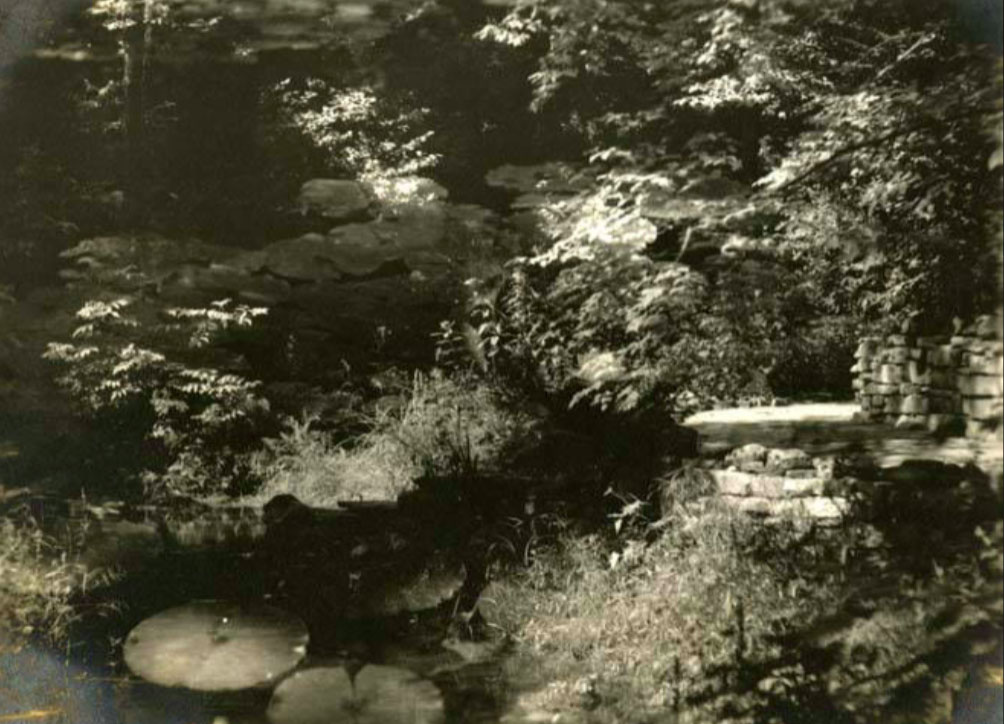 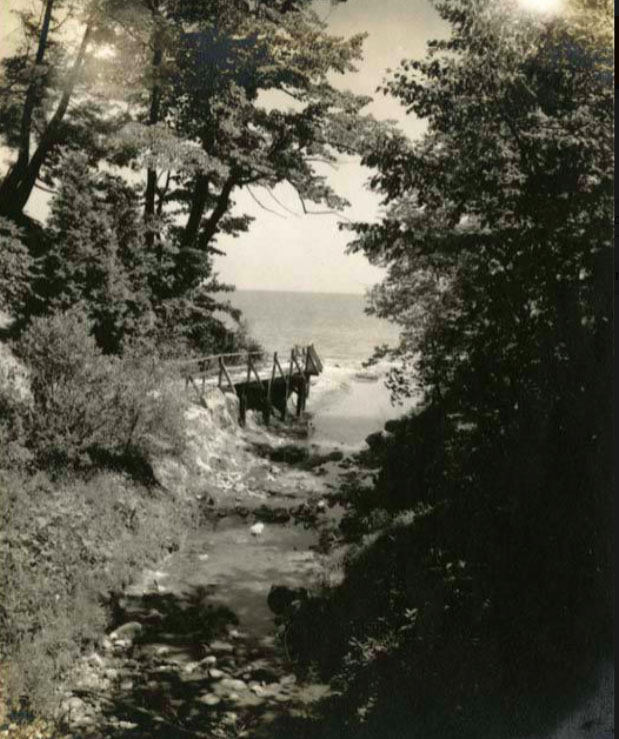 In 1929, the commissioners approved $5,000 to add lighting, via lamp posts, along the park’s main roads.

At the same time, according to the Milwaukee Sentinel that March, "Beautification of the north ravine will be continued under the director of Fred Wulff, caretaker, and Alfred L. Boerner, county landscape architect, with an appropriation of $2,500. Plans are under way to beautify the south ravine, if land owned by South Milwaukee can be secured by the county."

During the Depression, more than 200 workers lent a hand via the Works Progress Administration (WPA) and Civilian Conservation Corps (CCC) – a voluntary work relief program for young men – and with funding from the county. 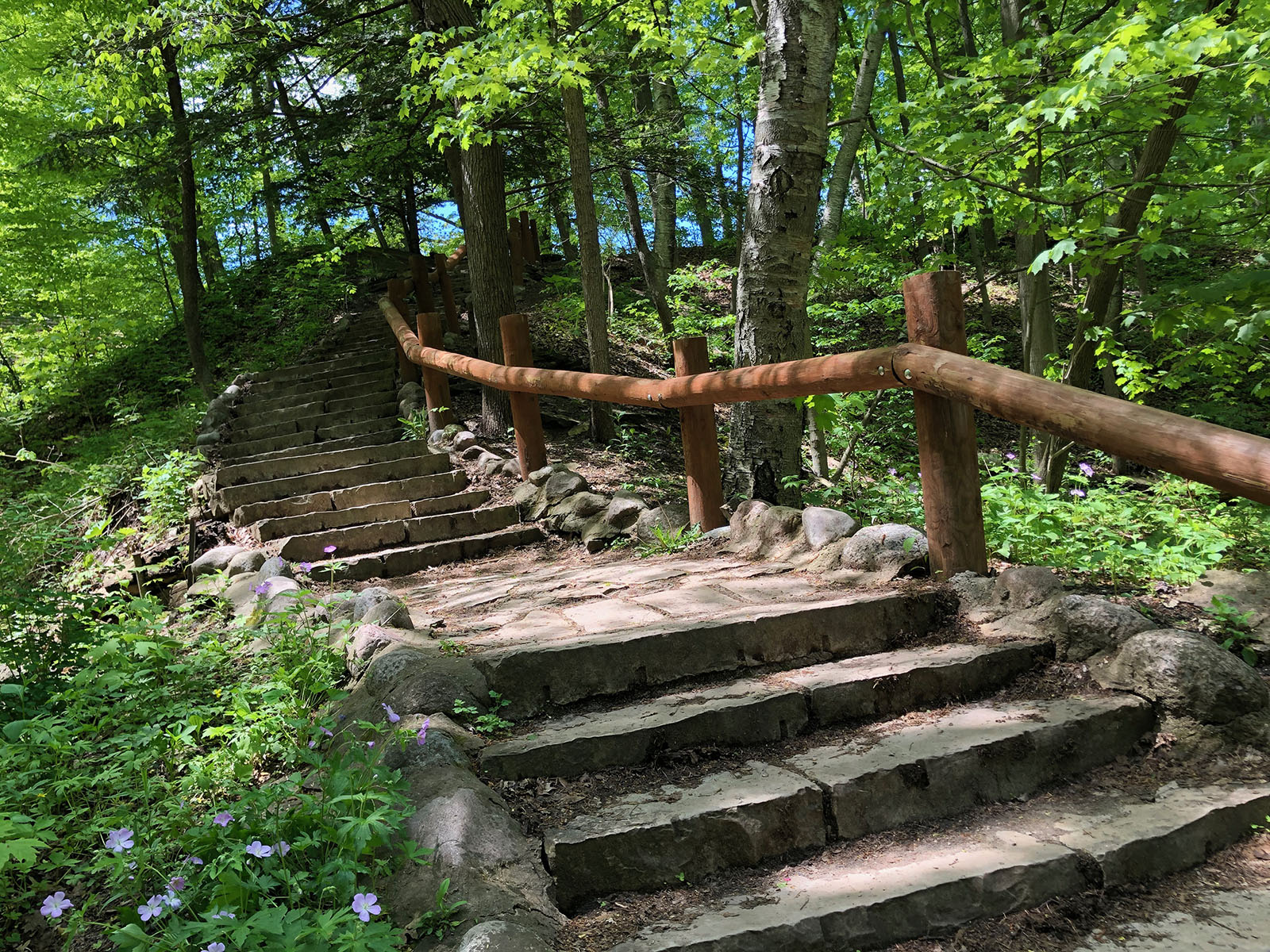 For example, in August 1935, $198,431 was allocated to Grant Park development as part of a package that included money for nine parks projects. Further funding was provided later that year, too.

This is the era during which the Bavarian-influenced entrance bridge was constructed, along with dams, ponds, stone staircases, a waterfall, rock walls, plantings and other features.

It’s amazing to think that for Wulff and his family, Grant Park was a front and backyard, too.

During Wulff’s era, in 1920, the park became home to the county’s first 18-hole golf course, with an 1892 farmhouse serving as clubhouse. 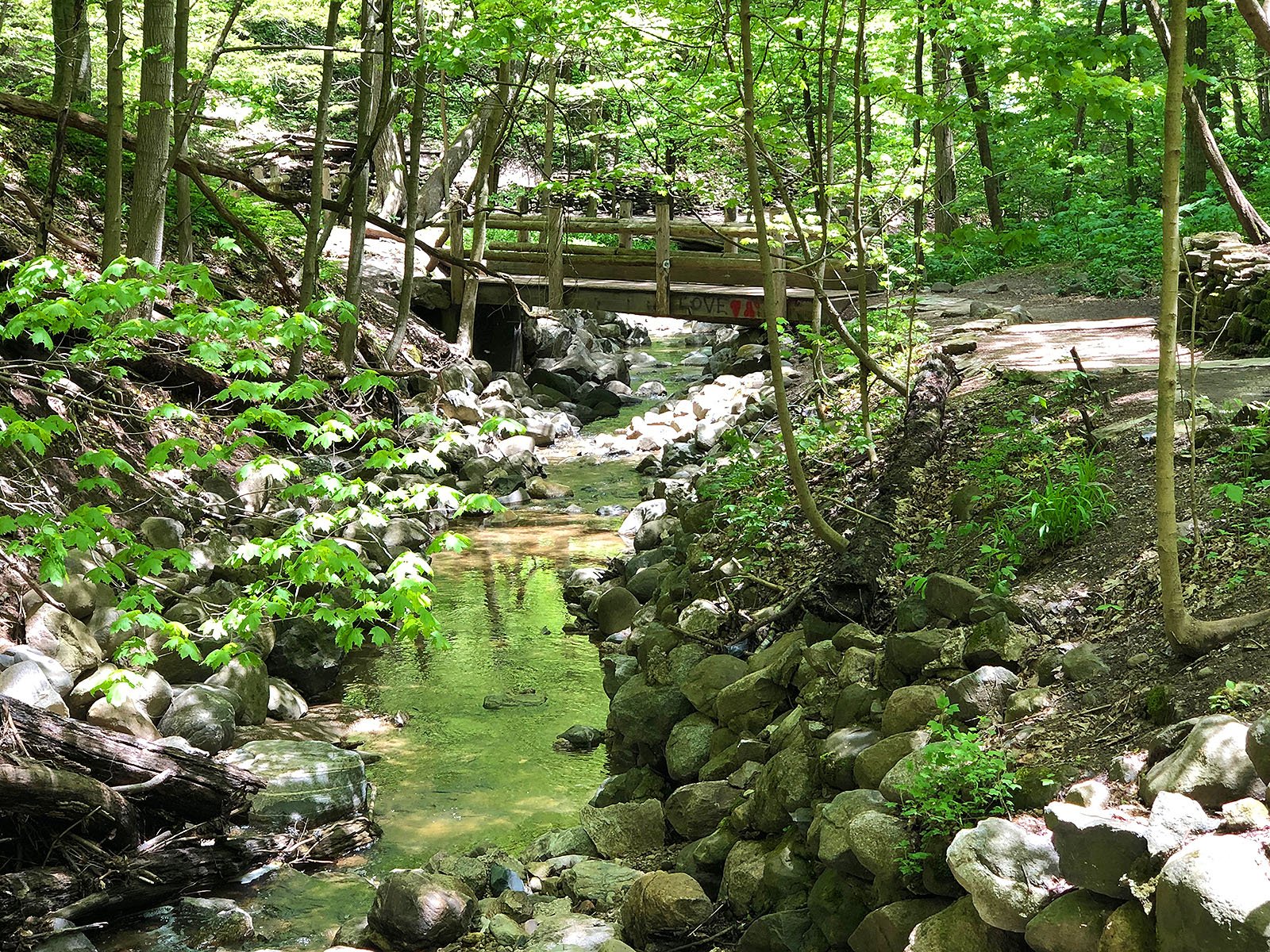 According to a brief history outside the lodge, "In addition to his horticultural duties, Wulff also served as the superintendent of the Grant Park Tourist Camp (like a campground), located on a bluff just northeast of (his home). Created at the behest of the Wisconsin Highway Commission in 1921, the tourist camp was a popular resting point for those traveling the Yellowstone Trail highway in the early days of cross-country automobile travel. Attendance at the tourist camp peaked in 1929 with 2,502 registered guests but gradually dwindled during the Depression until the camp finally closed around 1947."

The following year, Wulff retired his post and moved to Douglas, Oregon, where he died 20 years later. 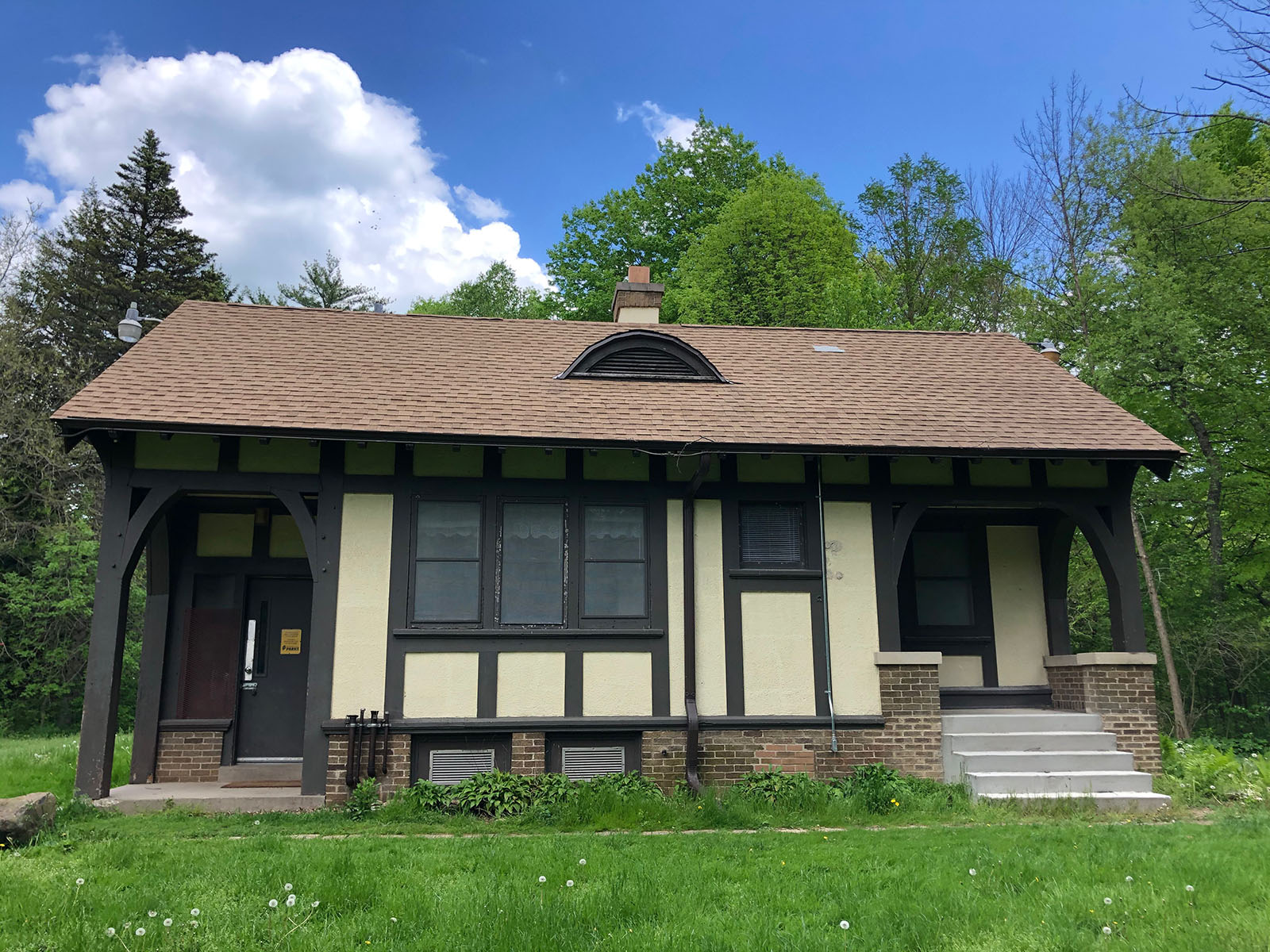 According to the history, Wulff’s family was replaced in the home by that of Barney Sparkowski, who became park superintendent. They remained until 1959 and then, after sitting vacant for a period of years, the house was converted into an overnight lodge made available to youth groups.

It got an overhaul, with new fixtures, windows and floors in 1995.

If that doesn’t sound like much, consider that the three men and two women of the Wisconsin Conservation Corps who did the work earned $4.25 an hour. The same crew refreshed the lodge. 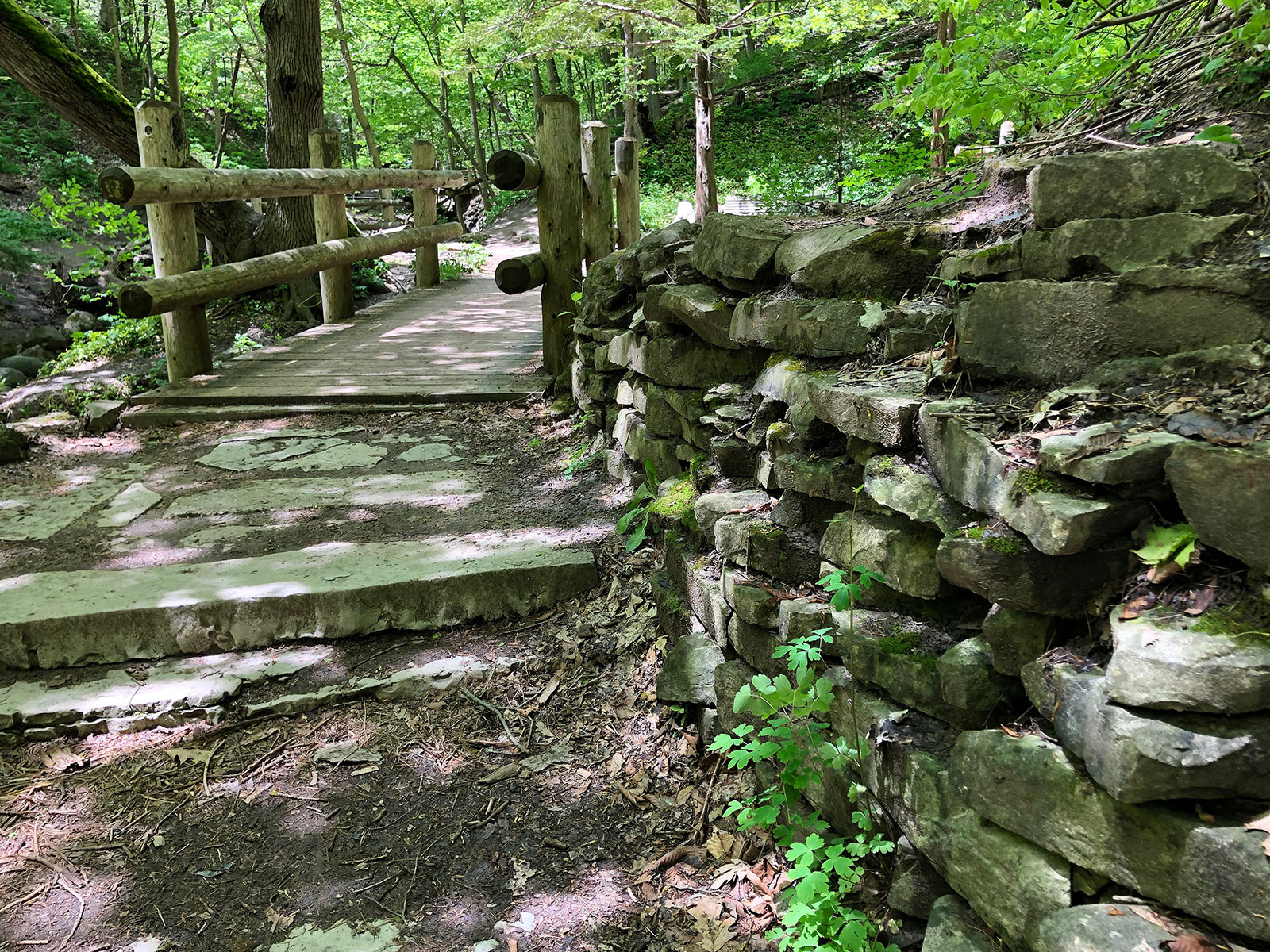 To help facilitate the work, the five installed a toboggan slide in the ravine.

The park’s own staff – which trained the Wisconsin Conservation Corps workers – renovated the covered bridge, which is adorned with a phrase to read upon entering – "Enter this wild wood and view the haunts of nature," a line from poet William Cullen Bryant’s "Inscription for the Entrance to a Wood" – and another to consider upon leaving: "May the God given peace of this leafy solitude rest upon and abide with thee." 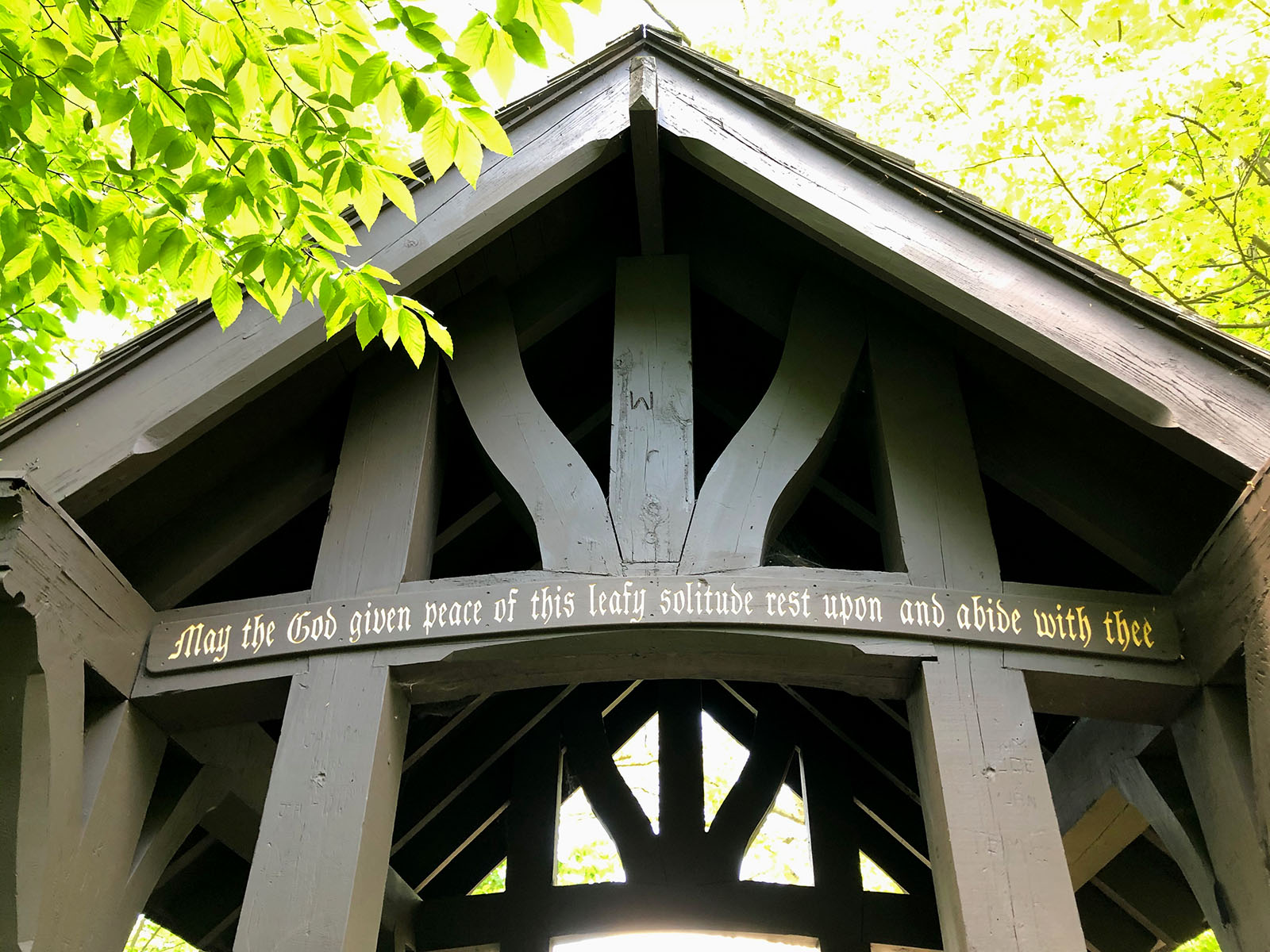 Though I’ve never experienced anything beyond the expected natural transcendence of nature on the trail, some say that it is haunted, apparently in part because Bryant used the word "haunts."

I’ll let Molly Snyder tell you about that.

For me, it’s the lannon stone and wood structures – the almost Olmsted-ian man-made nature – and the contemplative solitude of the path, and the way that tranquility ultimately opens onto the beach and the open vista of Lake Michigan that make the Seven Bridges Trail so alluring. 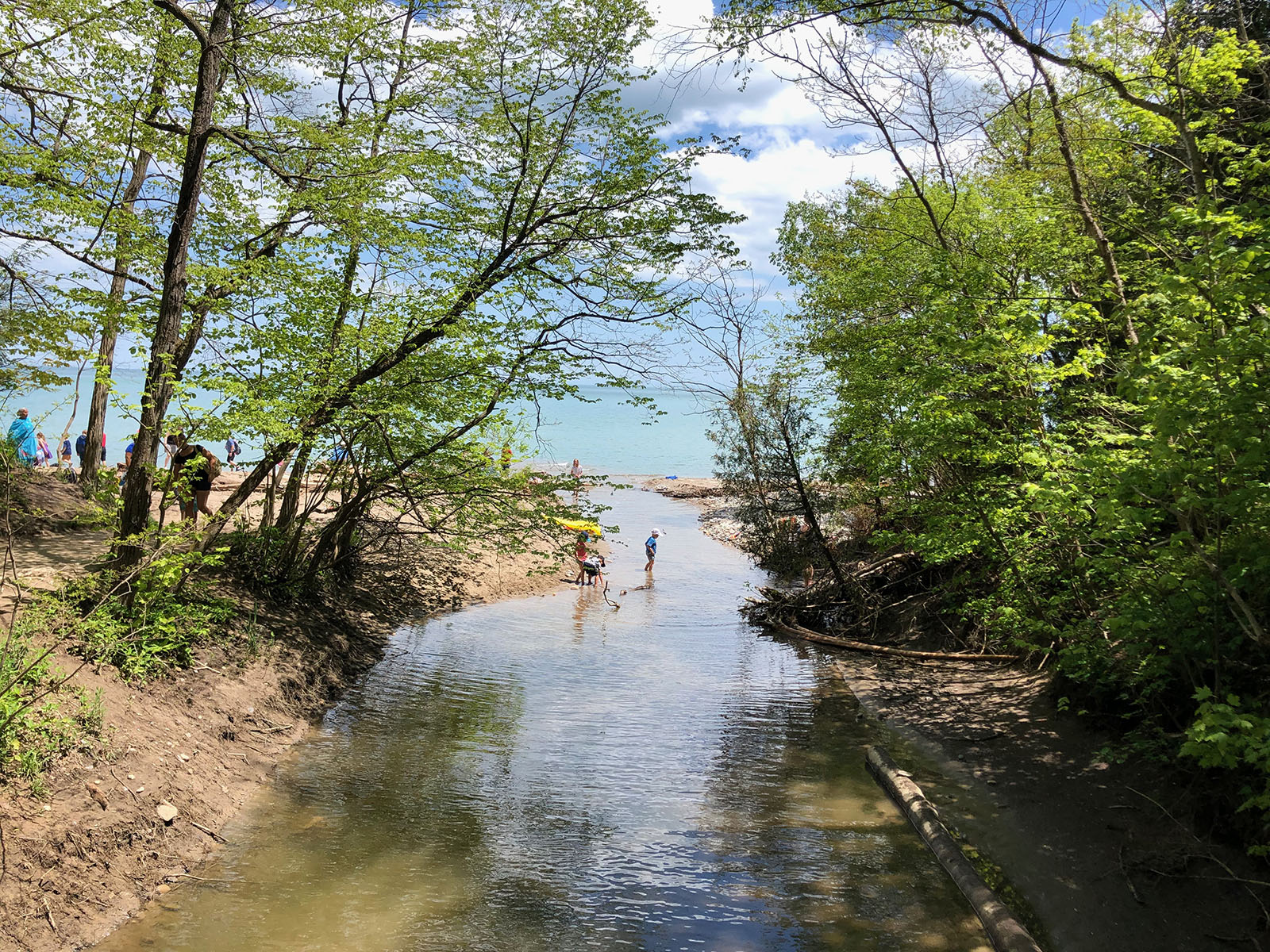 I’ll leave you with this fine description, from the website of the National Recreation Trails Program:

"Great care was taken to blend the man-made structures in with the natural elements of the ravines, creating a dramatic, yet serene environment around the trail. 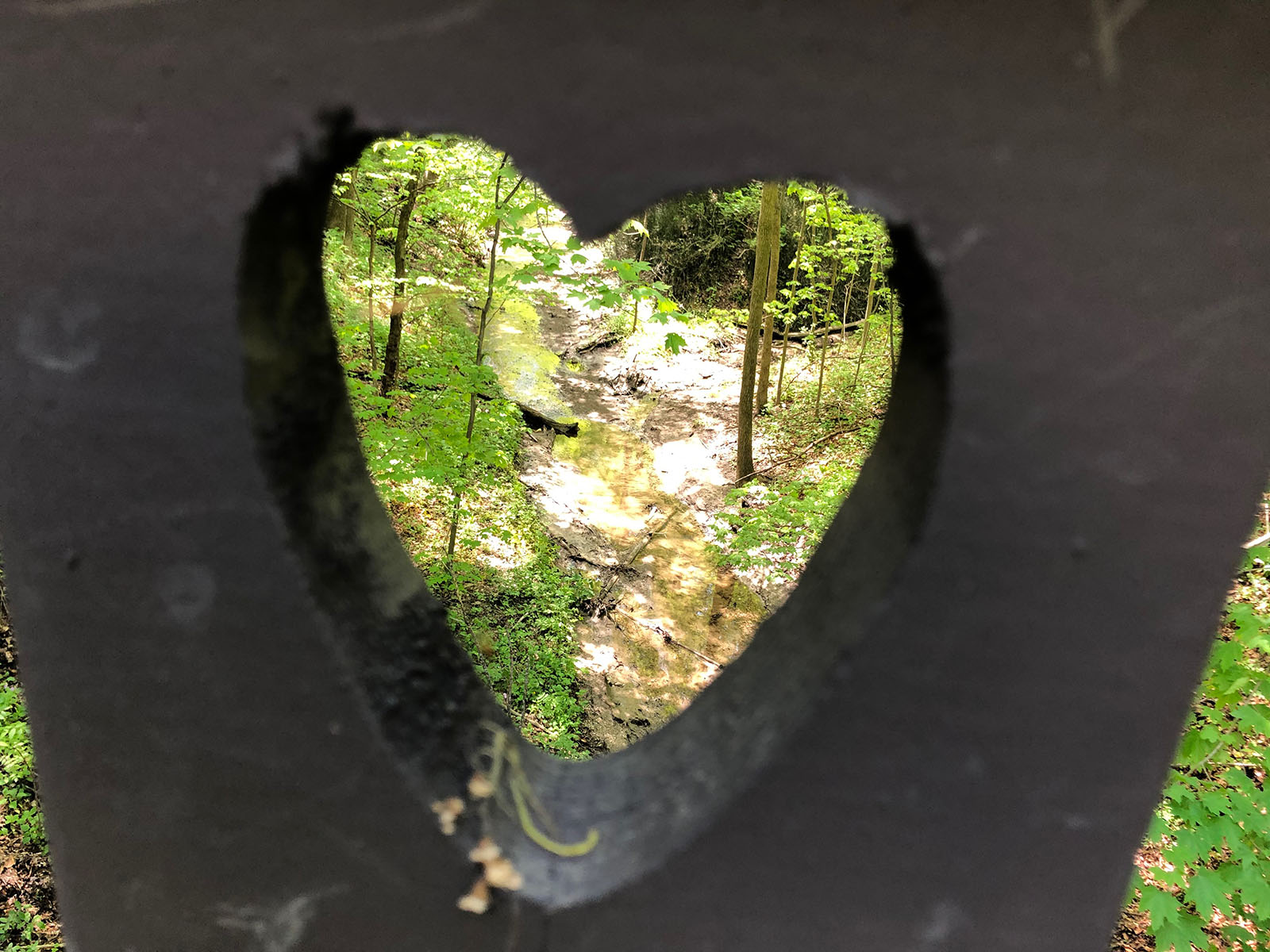 "Today the Seven Bridges Trail is a focal point of Grant Park, drawing thousands of visitors of a broad and diverse population from the Milwaukee area and beyond. Many urban school groups visit the trail for nature study and overnight stays at the Wulff Lodge. The trail offers wonderful opportunities for birding, photography, wildlife observation, silent strolling and access to Lake Michigan.

"The Seven Bridges Trail allows access to many outstanding natural resources found within Grant Park. The ravines are heavily wooded with very old stands of American Beech, Maple, White Ash and Yellow Birch trees. On the forest floor there is an abundance of spring ephemerals, trout lilies, jack-in-the-pulpits, May apples, trilliums and many other native flora. along the bluffs adjacent to the trail, there is a wet fen (meadow), which supports a population of plants rare to the area. As a prime migratory route along Lake Michigan, the area is host to many migrating birds."