A new fast casual restaurant specializing in mac and cheese is coming to Menomonee Falls later this summer. Grate Mac & Cheese will be located in the new Whitestone Station mixed-use development just off of Highways 41/45.

A new fast casual restaurant specializing in macaroni and cheese is coming to Menomonee Falls later this summer.

Grate Mac & Cheese will be located in the new Whitestone Station mixed-use development just off of Highways 41/45 at N92W16125 Falls Parkway. The development currently includes Costco Wholesale Club, Froedtert Health and the Wisconsin Athletic Club along with 318 apartment units and multiple additional retailers.

The restaurant will feature over 10 gourmet mac and cheese entrees in flavors like buffalo chicken, chicken bacon jalapeno ranch and green chile pepperjack. In-house recipes will be executed using all Wisconsin milk, butter and cheese.

Grate Mac & Cheese will be operated by Milwaukee-based Roaring Fork Restaurant Group, owners of the Qdoba Mexican Eats franchise. It’s an idea that’s began percolating last year, as Roaring Fork began work on developing a brand new concept that they could truly own in the Milwaukee market.

"It’s been a long journey," notes Abby Hansen, director of marketing at Roaring Fork. "We wanted to diversify and develop our own concept, and we have had great success in the fast-casual space. We also knew mac and cheese here in Wisconsin is something we could hang our hats on. We believe in genuine, uncomplicated goodness in the purest form, and for us, that’s mac and cheese." 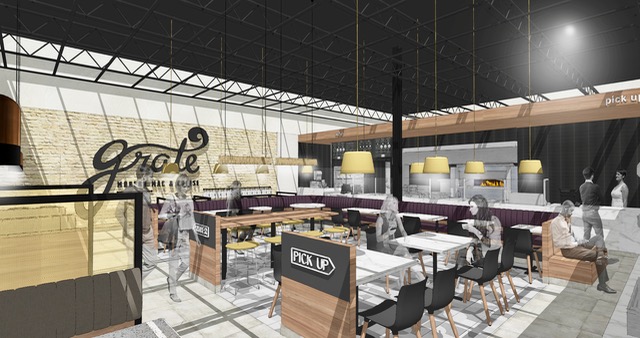 As part of the guest experience, diners will part of the action as their macaroni and cheese entrees are prepared before them using freshly grated cheese and then cooked in a cast-iron dish in the restaurant’s large Woodstone oven, a feature unique to the Grate concept.

Cheese for the restaurant will be provided through a partnership with the award-winning, third-generation Master Cheesemakers at Renard’s Cheese in Door County. Roaring Fork has also partnered with the Wisconsin Milk Marketing Board, who assisted with research and the development of more than 40 potential recipes for the menu.

"The cheese is really the hero in our concept," says Hansen. "We’ve been captivated by the emerging segment of mac and cheese restaurant concepts. We love the product, and we’re all connected to the nostalgia of mac and cheese as comfort food. When we decided to diversify our restaurant offerings, we knew mac and cheese was something we could own. We’re rooted right here in Wisconsin, so what better place to do this?"