Each year, the Soo Locks are scheduled to close between Jan. 15 and March 25. Ice typically makes the passage impassable and the Corps of Engineers needs time to perform annual maintenance. For the most part, this brings an end to the shipping season and transportation companies must find a place to park their boats.

The group – headquarted at Milwaukee Public Library, which I featured in this story a few years back – is very active in terms of collecting and archiving documents and photos and objects and also hosts numerous events each year.

I especially enjoyed this one because I once got the chance to tour one of the vessels mentioned: the Ostrander. You can read that story here. Here is today's story from the Wisconsin Marine Historical Society:

Each year, the Soo Locks are scheduled to close between Jan. 15 and March 25. Ice typically makes the passage impassable and the Corps of Engineers needs time to perform annual maintenance. For the most part, this brings an end to the shipping season and transportation companies must find a place to park their boats.

This year, the Locks closed as scheduled at midnight on Jan. 15. Last boat through was the Burns Harbor, which was headed for winter lay-up in Superior. During the next two months, contractors will inspect, repair, and install upgrades at both the Poe and MacArthur Locks. This work is vital. More than 4,500 vessels lock through at the Sault annually. These carry nearly 80 million tons of cargo. 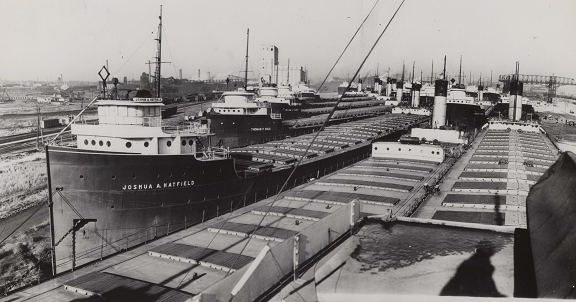 During this period, a multitude of engineers, welders, pipe fitters, mechanics, and electricians around the Great Lakes will also be working to ensure the boats are ready to sail in 2020. It is estimated that U.S. flag carriers will invest nearly $97 million in maintenance and modernization on their fleets. Much of this work will be done in Wisconsin. Two of the four major shipyards on the Great Lakes are in the state: Fraser (Superior) and Fincantieri (Sturgeon Bay).

Some work will be performed in Milwaukee.

In 1931, Milwaukee contracted with the Edward E. Gillen Company to dredge a marshy area west of Jones Island that connected with the Kinnickinnic River. Initial plans called for a mooring basin wide enough to handle 10 vessels. It was later enlarged. Milwaukee's mooring basin became the winter home for several boats of U.S. Steel’s Pittsburgh Steamship Company, which operated the largest fleet on the Lakes. These were referred to as "tin stackers" because of their distinctive silver smokestacks.

The winter of 1938-39 was a record year for Milwaukee’s mooring basin. It hosted 27 boats, 22 of which were "tin stackers." Rental fees netted the city about $30 per month for each vessel. And since each boat spent an average of $5,000 making repairs and purchasing supplies for next season, Milwaukee merchants collected about $135,000. In 2019 dollars, that equates to almost $60,000 for the city and $2.45 million for local merchants.

This year the Cort and the Ostrander/Integrity are back. To see them, stop by Harbor View Plaza at the east end of Greenfield Avenue near the UWM School of Freshwater Sciences. And to see more images of the mooring basin filled with tin stackers, check out Milwaukee Waterways, a digital collection of the Milwaukee Public Library. Just click the following link: Milwaukee Waterways.

The Canoemobile and Water Commons' annual festival return to the lakefront

That sound you heard last night? It was a foghorn, but from where?