Though it's already been serving customers for more than a week now, the first Grimaldi's Pizzeria in Wisconsin officially opens at The Corners of Brookfield on Friday, Nov. 10. We stopped in for a peek on Wednesday and here's what we found.

Though it's already been serving customers for more than a week now, the first Grimaldi's Pizzeria in Wisconsin officially opens at The Corners of Brookfield, 20019 Lord St., on Friday, Nov. 10. We stopped in for a peek on Wednesday.

Located in the new Brookfield mall, Grimaldi's is set on a corner in a recreated "town square" (think Bayshore), with a covered outdoor seating area that will be inviting once the warm weather returns. 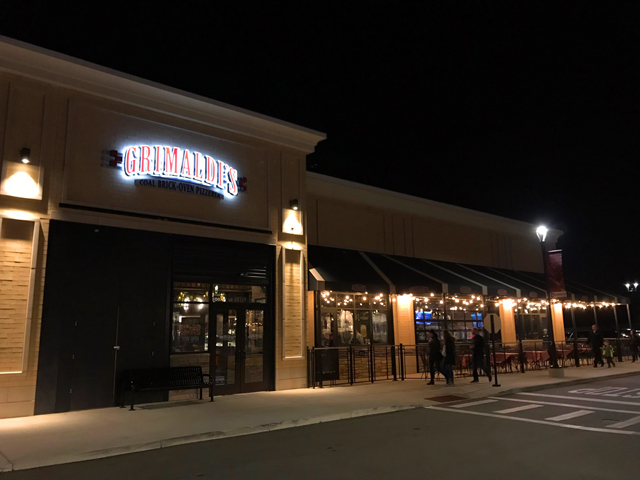 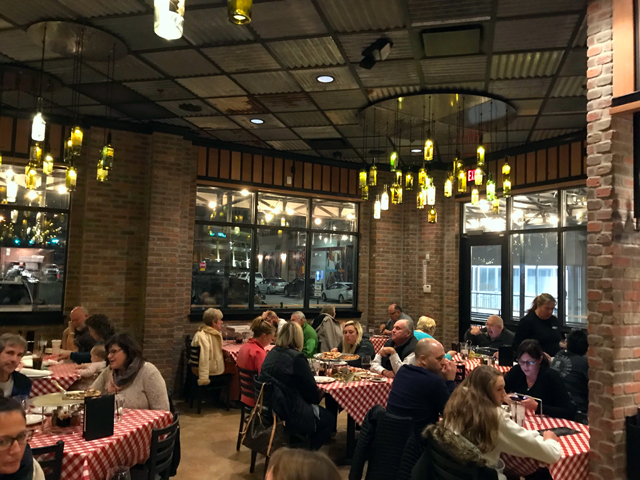 Inside, the exposed brick interior, which covers nearly 5,000 square feet, is filled with red and white checkered tablecloths, an open kitchen and a full bar. The walls are adorned with framed photographs of New York City, where the first Grimaldi's opened nearly 30 years ago.

It's warm and inviting, if a little loud at times.

The first Grimaldi's was opened in Brooklyn's DUMBO neighborhood in 1990 by Patsy Grimaldi. When he retired not long after, he sold to Frank Ciolli, whose son runs the chain based out of Scottsdale, Arizona, with 54 locations in 16 states. The Brooklyn location, practically right under the Brooklyn Bridge, is still open.

The staff at the new place was extremely friendly and doted especially on the kids, bringing them small pizza pans with lumps of dough to keep their hands and minds occupied. 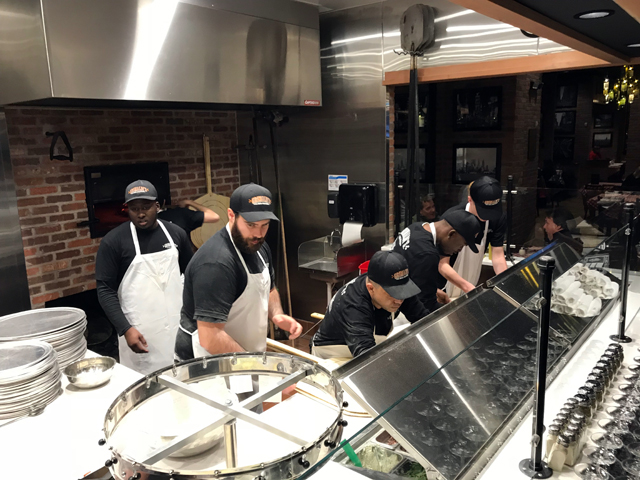 The open-concept kitchen allows diners to get a glimpse of the oven that is Grimaldi's bread and butter, as well as the pizza makers prepping the pizzas for the oven.

The oven itself is no joke. Fabricated onsite by Grimaldi's, which created its own oven manufacturer to build them, the pizza ovens are made of 25 tons of brick, steel and concrete. The interior is eight and a half feet deep and five feet wide and can accommodate 18 pizzas. 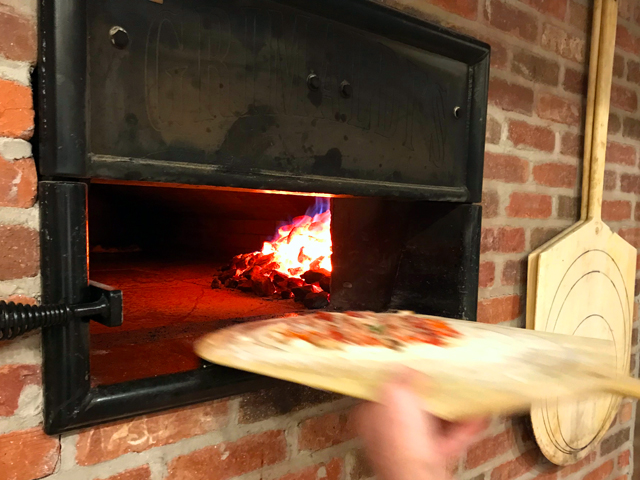 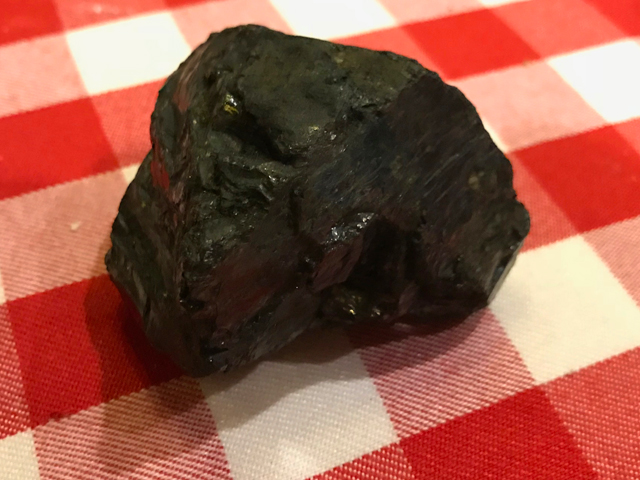 When the restaurant is rocking, the cooks are really tested. They have to use an almost unwieldy 110-inch pizza stick to maneuver the pizzas in the oven. And since the anthracite coal burns hot – it can reach upwards of 1,200 degrees in there – time is of the essence. A quick distraction can mean the difference between a perfect pizza and one to pitch into the trash.

The oven – and Grimaldi's ingredients (it uses Bel Gioioso cheese, among others) – make for pizza with a really great crispy and nicely toasted crust.

According to the company's executive chef, Cory Lattuca – who was in Milwaukee for a week to help train staff and open the new restaurant – Grimaldi's uses special flour, proprietary pepperoni and sausage recipes, and a water filtration system that recreates New York City water. 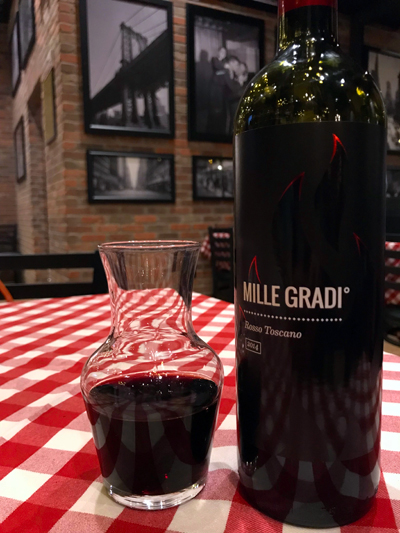 "Believe it or not," Lattuca says, "New York has phenomenal tap water. It has a high lime content and is great for baking."

Because the ovens generate so much heat, Grimaldi's can put raw sausage on the pizza and it's cooked by the time the pizza is done, Lattuca says.

We sampled a basic cheese pizza and a Brooklyn Bridge pizza with sausage, ricotta and roasted red peppers.

Both had phenomenal crusts and a nice blend of toppings. Unlike most American pizzas, Grimaldi's pies aren't weighted down with tons of sauce and cheese, and that's OK because the crust is so good, it's better when it's allowed to shine.

We paired the pizza with Grimaldi's own Mille Gradi Tuscan red wine blend, created by Lattuca in Italy along with the folks at Rocca della Macie in Castellina in Chianti. It's fruity with a dash of oak.

If it's not to your taste, the restaurant has a good wine list with a number of interesting choices, like Prunotto's brightly acidic Fiulot barbera from Piemonte.

Grimaldi's doesn't do much beyond pizza – which is clearly the focus – but it does offer a variety of salads. The house salad has romaine lettuce tossed with red onion, cherry tomatoes, roasted red peppers, mushrooms, green olives and a vinaigrette. 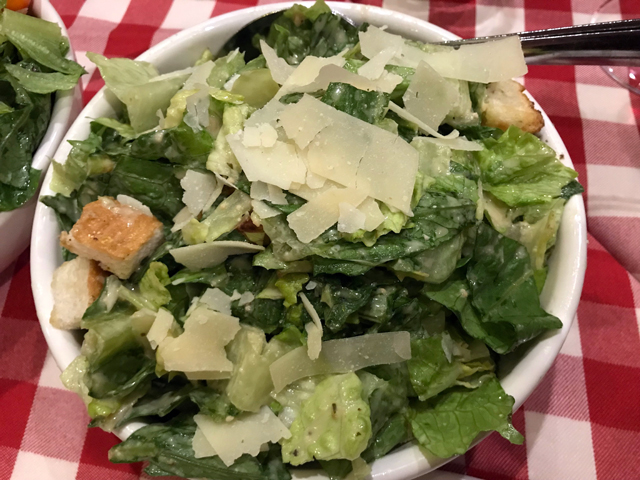 I preferred the classic Caesar, also built on a bed of romaine but with croutons baked with garlic and salt in that searing oven, and topped with romano, Asiago and parmesan.

There are a handful of other options, too, including a caprese. 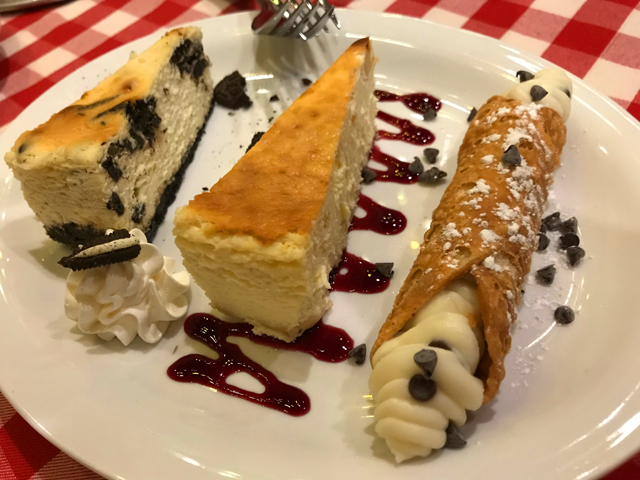 For dessert, Grimaldi's offers a range of solid New York-style cheesecakes and a few other options like cannoli and tiramisu. Order a pick-three platter and share it to get the full experience.

While Milwaukee does not suffer from a shortage of pizza, Grimaldi's is a nice addition because it brings a pizza experience unlike the others on tap here.