So who drinks at grocery store bars?

Recently, a slew of bars opened inside local grocery stores, raising the questions "who drinks in grocery stores" and "why"? OnMilwaukee went on a "grocery store bar crawl" in search of answers to these questions – and, of course, to have a few beverages.

In general, grocery store bars have some things in common. They definitely don't feel like "real" bars because of the familiar grocery store noises and smells that permeate the experience, and yet, depending on lighting and location, some of the grocery store bars feel more "bar-ish" than others.

Louie's Coop, the bar in G. Groppi Food Market, 1441 E. Russell Ave., is a stellar example of a grocery store / bar hybrid. The lighting is low, the vibe is friendly and the bar is off to the side, away from the shopping bustle.

During our visit, we had the pleasure of sitting next to owner John Nehring. During our conversation, Nehring reminded us that grocery store socializing is actually not a new concept.

"In the early 1900s, the store is where people met," says Nehring, who also owns two Sendik’s locations, Nehring’s Family Market inside the Public Market and V. Richards Bakery & Deli. "This whole neighborhood (Bay View) is so much about community and putting this bar in here really brings it together."

Nehring purchased the specialty grocery store from Louie Groppi in 2003. At the time, Groppi’s garage stood where the bar is today.

"Louie had pigeons on top of the garage and when I bought the business I told him he could keep them there as long as he wanted," says Nehring. "Six years later, Louie passed away and I decided to expand the store and build the bar in his honor."

Louie’s Coop seats about 12 people and gets very crowded, especially on weekends, according to Nehring. However, people stop by for wine, beer or a mixed drink at different times of the day, sometimes spontaneously in the middle of a shopping excursion and sometimes as an intentional drinking destination.

"Suddenly men want to go shopping for their wives so they can stop for a beer, too," says Nehring. "And women love it, too. They often run into friends or neighbors here and decide to sit down for a few minutes and catch up over a glass of wine."

For some people, grocery shopping is a chore or a task, something one must do before picking up the dry cleaning or after working out at the gym. However, Nehring – who also opened bars inside Sendik’s on Oakland and at his location in the Public Market – says his customers approach food buying differently.

"People who shop at my stores do so every day, or at least four times a week," he says. "They’re here to pick out their steaks for dinner that night. It’s a different style of grocery shopping – a more European way of shopping."

Easy access to a store filled with foods makes grocery store drinking appealing, as well. It takes "bar snacks" to a new level.

"You can grab whatever you want from grocery and eat it here with your beer or wine," says Gregg Twigg, a full time bartender at The Tap, a bar and gathering space on the south end of Shorewood’s new Metro Market that features 12 tap lines and a plethora of bottles, cans and "crowlers," 32-ounce cans that are filled and sealed to go. 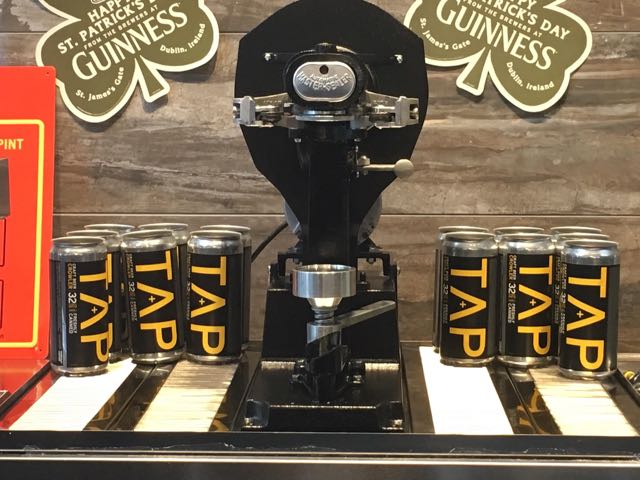 The Tap has televisions, which makes it feel more like a sports bar environment than the other grocery store bars, but it is also spacious enough to avoid the TV is someone chooses. The bar is on the far south end of the building, so it feels somewhat separate from the food shoppers and yet close enough in proximity that workers from the hot food section of the store stopped by with samples. There is also a lot of natural light in the space, which we appreciated.

Ian Bennett and John Ehn IV, University of Wisconsin-Milwaukee college students currently on spring break, said they stopped in for a pint at The Tap after work.

"We always stop in here for lunch – they have great deals like $2 brats – and we are always amazed how nice it is in here so we finally came back after our shift," says Ehn.

Twigg says his customers are a mix of shoppers taking a break as well as people who come specifically to have a drink. "Grocery store bars are comfortable for people who generally don’t like bars," he says. 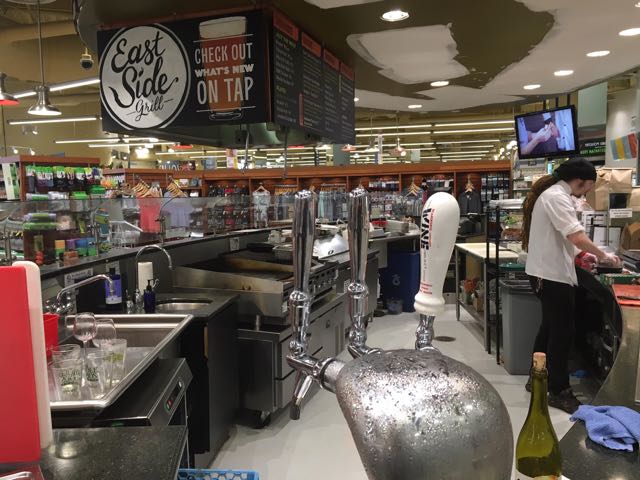 Whole Foods’ East Side Grill was one of the first grocery store bars in Milwaukee. Located in the center of the store and under bright grocery store lights, it feels more like sitting in a grocery store than the others. We liked it the least because it just doesn't feel like a hang-out-and-have-a-beer environment, but it would be a good spot to quickly have a drink in the middle of shopping or to wash down a sandwich.

East Side Grill has five rotating beer taps, one wine tap and usually a bottle or two of opened wine. Beverage Team member Matt Brooke says the grill often has good deals on unique beers, which pulls people over from their shopping experience and brings people in just to get a good deal on a drink.

The new Whole Foods in Wauwatosa also has a bar called the Tosa Tavern, which feels more like a bar than East Side Grill.

"At both places we're always getting craft or micro beers that are special and rare," says Brooke. "Drinking in grocery stores is becoming more and more popular." 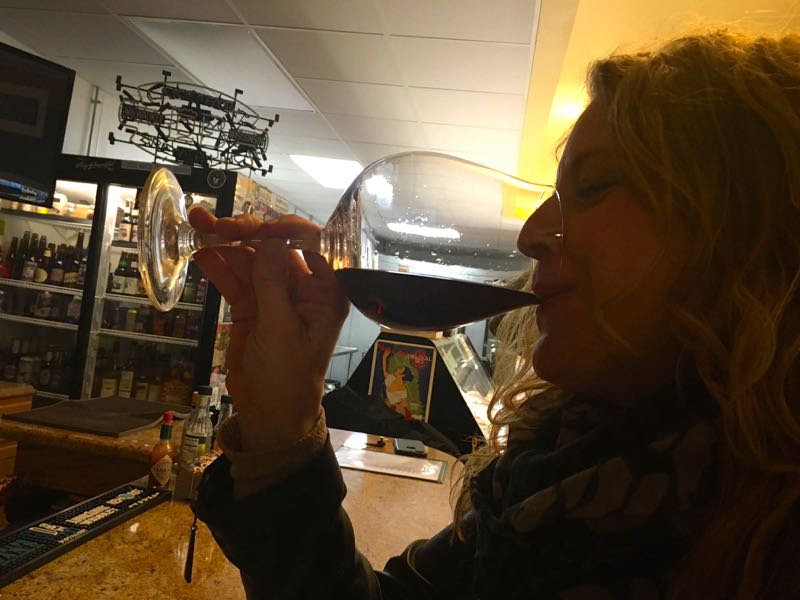