Three student journalists at the University of Wisconsin-Milwaukee spent a semester studying Milwaukee County's gun court, the court where non-fatal shootings are sent. What they found is crucial to further understanding the city's crime debate.

Case in point: the recent individual stories on defendants, such as an accused carjacker, getting low bail amounts for serious crimes in Milwaukee; one then allegedly reoffended. What the media isn’t telling you when they report these individualized cases? The few cases they’ve highlighted are not aberrations. Bail amounts of $10,000 or less are the norm in Milwaukee County courts when it comes to at least one category of the most serious offenders: those charged with illegal gun offenses.

What happens then is that some of these accused gun offenders commit new crimes – including very serious ones – violate pretrial supervision by failing drug tests and/or intimidate witnesses or victims so cases fall apart. It strikes me that most people probably thought that people who are charged with shooting people in Milwaukee, or illegally carrying weapons as felons, are immediately incarcerated and stay there until sentencing, off the streets. However, this is routinely not the case.

How do I know this? Because three of my student journalists at the University of Wisconsin-Milwaukee – Pakou Lee, Rebecca Papenthien and Emily Zantow – spent a semester studying Milwaukee County’s gun court, the court where non-fatal shootings are sent (the sample also included many weapons possession cases, such as felon in possession of a firearm). Altogether, they reviewed 550 cases that had in-court activity in gun court from August to May.

This kind of reporting takes work and dedication. In an era of declining media resources, there aren’t many people taking the time to inform the debate this way (although there are a few). I wish the media would spend more of its resources informing us with such data points and spend less time on warring rhetoric we’ve all heard way too many times or the same video of a crime scene that looks indistinguishable from the next.

Why does this matter? Data points help the system pinpoint possible solutions. If serious gun offenders didn’t bail out for months at a time because their cases are pending in an overcrowded court system, they wouldn’t be on the streets to reoffend and intimidate victims and witnesses, a rising issue in Milwaukee County. Would you testify against a gun offender if he was back out on the streets in your own neighborhood awaiting trial?

How to speed up cases? That might require a second gun court; that’s a resource issue, and the court system is funded by the state. Yet, the rhetoric tends to always focus on adding more cops. That’s how data points can inform the debate or at least infuse it with new ideas.

There is a lot of academic research that shows the media’s heavy diet of episodic crime scene scare coverage distorts citizens’ perspectives about the amount of crime in their communities. Print media have historically been the best at connecting-the-dots coverage, but other than some good work on federal court, I haven’t seen a lot of context recently in the crime debate in Milwaukee.

I tell students to look for the patterns, in part, when dealing with a data set so large. I also instructed them to conduct human interviews to contextualize the data. The student findings give us a window into how firearm-related crime is handled in Milwaukee. It is another facet in a complicated debate.

So what really happens in gun court? The results were fascinating.

An example of a case in the student study: "One Milwaukee man, charged with being a felon in possession of a firearm, violated pretrial supervision at least eight times after being released on $2,500 bail. ‘Court takes no action,’ the records repeatedly say.

"The month before the felony charge, the man was accused of misdemeanor disorderly conduct, but the case was tossed out when the prosecution declared it could not proceed. Why was he a felon? In 2011, he was convicted of possessing a short-barreled shotgun/rifle and given 120 days in the House of Correction.

"In the felon in possession of a firearm case? The judge sentenced him to 90 days in work-release jail and probation (with a stayed sentence he doesn’t have to serve unless he messes up again). A Facebook photo of the man is below (with his face cropped out)." 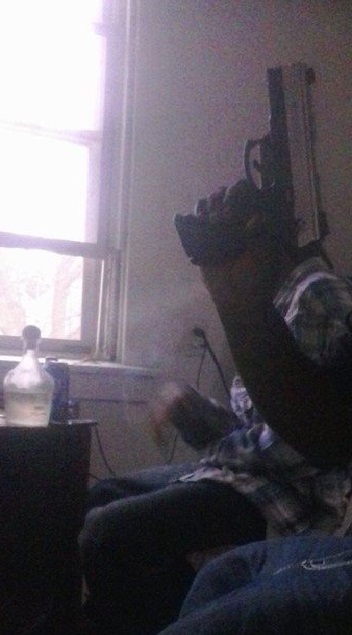 You can read the full student report on our student news site. If you care about the issue of crime in Milwaukee, it’s worth the read.